We’ve all heard the hilarious story about how to tell the difference between black bears and grizzlies, right?  Black bears will have remnants of berries in their scat, and grizzlies will have remnants of bear bells in theirs!  All joking aside, our bike trails are out there in nature, where bears and snakes and mountain lions live.  It’s their home and we are just lucky visitors.  Protect yourself and the wildlife near your trails with some simple tips for avoiding too-close wildlife encounters on the trail.

Recently my friend Adelle and I were up biking on the Mesa.  I’d already warned her that during the parts of the ride in which we’d be in the woods, I would be talking loudly and yelling to the bears that we were around. Ironically, before we even got to the woods portion of the ride, we saw this guy: 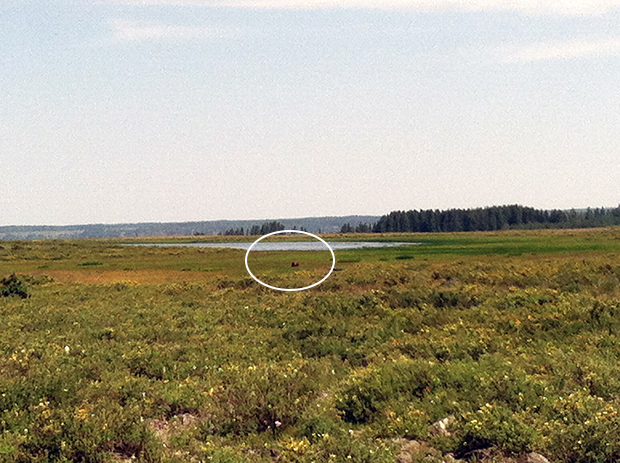 I had to zoom in with my iPhone, but trust me, it’s a bear.  We were about 75 yards from the bear and he had absolutely no interest in us.  I yelled.  He didn’t even acknowledge that he’d heard me.  So we carefully biked on and I wondered why I hadn’t thought to bring bear spray.  On the way back, we both kept an eye out and made sure to yell loudly and talk loudly, but we never saw the bear again.  So, when biking in bear territory:

a. Be alert.  Keep an eye out for large squat furry things in the distance.

b. Talk loudly, especially in the woods.  We do this when backpacking too.  We yell things like, “Hey bears!  Hey Yogi!  No picnic baskets here!”  If the bear hears humans he/she is likely to run the other direction.  This way no one is startled or surprised.

c. Take bear spray.  We’ve done this when biking in Montana where grizzlies roam. I certainly thought about it more recently.  It’s proven itself effective in many situations!

d. If you’re faced with a bear, back away slowly. Do not turn your back on the bear.  Use your bear spray if necessary.  If the bear attacks, fight back if it’s a black bear; if it’s a grizzly bear, try to lie on your side in the fetal position and be as still as possible.  This has been shown to decrease the severity of injuries.

Snakes are a fairly-common site on many trails.  I for one am irrationally terrified that one will get caught in my spokes and just wait to attack me until I stop for a break. A few weeks ago some friends and I were biking at Lunch Loop on our lunch break, and between the time my friend ahead of me went down the trail and when I followed in her tracks, a bull snake appeared.  I was in a spot where swerving wasn’t an option, and he just shot out of nowhere! As he and I continued on our collision course I saw him raise his head and pull it back, so hopefully he got out of the way.

Avoiding snakes can be difficult if you’re moving quickly, like on a downhill section of trail. I think the best advice is to:

a. Just keep an eye out for them when you’re on the trail.  You’re already looking ahead, so if you see a “stick” that seems to be out of place or oddly shaped, take note: it’s probably not a stick.

b. Watch where you put your feet when you stop for a break. Overhanging rocks make nice shady places for creatures to hide.  Brushy trail edges could be where they’ve just slithered off to after a recent break on the trail, too.

c. If you do see one stretched across the trail, try not to antagonize it.  The snake doesn’t want to bother you and doesn’t realize he’s in your way. Chances are he’ll realize that you’re around and move on shortly.

d. If you are faced with an angry snake, don’t make any sudden movements.  Try to move carefully away from the snake.

This poor guy had flattened himself out on the backside of this rock and only got noticed after our friend’s tire rolled over the rock.  He seemed ok, though, and moved on off to the side of the trail.  (I wasn’t that close: this was a zoomed-in photo).

I have, fortunately, never encountered one of these in the wild, and I really hope I never do. Mountain lions normally hunt at dawn and at dusk, so you’re at more of a risk when biking in the cooler hours of morning and evening.  They like to hide in dense brush, so if you’re wandering around in the bushes looking for a bathroom, make a lot of noise.

a. Wearing bright colors can deter mountain lions because it helps them distinguish you from their favorite food: deer.

b. Be alert.  Be careful bending over, as this exposes your neck and back: places mountain lions like to target.  Keep up a stream of conversation, too; lions go out of their way to avoid contact with humans and even other mountain lions, so hearing a human voice will most likely send them in the opposite direction.

c. If you are faced with one, make yourself look as big and menacing as possible as you slowly back away, making sure not to run and to leave plenty of options for the lion to escape what it (hopefully) will see as a dangerous person or threat.  DO NOT RUN.

These same general rules of making noise and backing away slowly can be used for encounters with other possibly threatening animals like moose and coyote as well.  I’ve never had issues with either one, but moose can be quite territorial.  As long as the animals hear you coming and know what you are and you give them their space, you probably have nothing to worry about.

We all want to enjoy the outdoors, and wildlife encounters can be really cool experiences.  Still, it’s best to know what to do to stay safe and protect both you and the animals living near our trails.

Your turn: Have you ever had a close encounter with a formidable animal while mountain biking? Share it with us in the comments section below!

Trails
Herded Away: The Story of a Missed Descent
Community
Racing Enduro Is Inherently More Dangerous than Racing DH [Opinion]
Culture
Search and Rescue: When the Unthinkable Happens
Trails
The Mountain Biker's Guide to Nature 🌍

Back in the day…when i lived in silver city nm last year, i ran into a mexican gray wolf. How did i know it was a wolf? It was by itself, It had a radio tramsmitter attached to it and it was too big and full to be a scronny coyote. I just stopped got off my bike and let it go on its way while it looked at me with eyes that said: “vaya con dios”. But it was the pack of javalinas that i hated running into. Those things stunk and were nasty.

Very cool Aug52K. Yes, they are there, and we are hoping that they can find a way to hold their own and multiply. It’s been slow going. There are not many in the region, so you just had a “rare event” experience for sure. I had the privilege to help do some of the initial analysis in AZ for suitable habitat to reintroduce the MGW in AZ and NM.
And interestingly, we have had a recent sighting and photos of a lone wolf on the North Rim. Presently, it is guessed to be a member wolf of a project in the Northern Rockies, but nothing is for sure yet.

Crossed paths with a cottonmouth a few weeks ago, a venemous snake known to be aggressive. And he was PISSED and standing his ground. Someone had passed him just before we did, so he was being defensive. We used a loooooong stick to push him off the trail so the next rider along wouldn’t get bit. I pushed him about 4ft before he finally turned and ran!!

Yikes! We ran across a second very small pygmy rattler maybe a month ago out on Western Rim. It’s the only place here that I’ve personally ever seen them. This guy was so little! He was crossing the single track right as I approached and I stopped to watch him get to safety under a bush. On the one hand, it’s cool to really see wildlife up close, but on the other hand…I would NOT want to deal with a cottonmouth on the trail!

I’ve stopped for pictures or snacks and been pecked by grouse in Vermont and Oregon. Nasty little things when you happen to stop by their nests. They successfully chased me off on each occasion! In all seriousness, this is a great article that should come up periodically to remind us of the hazards.

When bike packing I know most everyone is pretty much a gram counter. In bear country though, add the weight of a long piece of ultra thin nylon type rope to hoist your food up in a tree each night away from you and your bike. Of course you don’t want your food with you when sleeping, but you also don’t want it with your bike. A bear could damage a bike in a variety of ways (e.g. a brake line). Plus, you don’t want a bear to take your food, and then you would be without food in the backcountry.

P.S. I have seen a cougar in Oak Creek Canyon near Sedona. BEAUTIFUL CREATURE.

I was visiting Scottsdale two years back and rented a bike and took a ride after my last business meeting. It was November and late in the day. I shot over to browns ranch and did a ten mile ride that ended near dusk. Twice when I stopped to take a quick breather I was within feet of two different big diamondback rattlers. I went back the next dat in the am and asked a couple riders if that was normal and the said they had lived there for a couple years and never saw on on the trail. On that same evening ride I had a really big tarantula walking right down the middle of the trail towards me. It had rained just before I went so that might have brought out the wildlife. But let me tell you I watched my step and where I was riding like a hawk after that first ride!