I saw this 2013 video of mountain bikers crashing (mostly on downhill runs) on a couple of Facebook pages in recent weeks:

Most of the crashes in the video seem to happen in such a way that there’s little the riders could do to mitigate the impact because of the speed or type of motion that their bodies had.

But there are at least two types of falls in which riders do seem to have some ability to, all things being equal, make better or worse.

Here’s a sequence of 4 screenshots from the above video (at the 01:26 mark) showing how one rider extends his hands and arms straight out in front of him as he goes OTB: 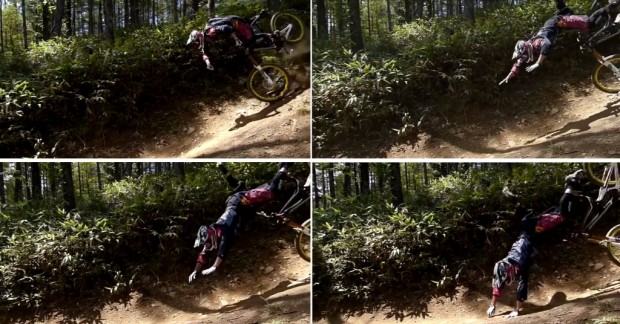 Here’s a one-minute video (GoPro chest harness view) of me crashing at MORC’s Lebanon Hills Mountain Bike Park in Eagan, MN last year.  I got caught in a brief rain shower that turned the trail surprisingly slick and I slid out three times in a short span, mainly due to improper form on the flat corners:

In both types of falls, my instincts are to use my hands and arms to protect my head because it’s where my brain is, not withstanding my wife’s contention that it sometimes migrates to more southern regions of my body.

The expert mountain bike coaches suggest that this instinctual maneuver to extend our arms in a fall is generally a bad idea (there are exceptions) because of the havoc it tends to wreak on our hands, wrists, rotator cuffs, collarbones, etc.

I first blogged about this back in 2012 with a post titled: How not to crash on your shoulder. I’ve never followed through on the tumbling drills advice in the video by James Wilson, in part because I had a handy excuse: I didn’t have easy access to a place with a tumbling mat. I do now, at my local Northfield Area YMCA. 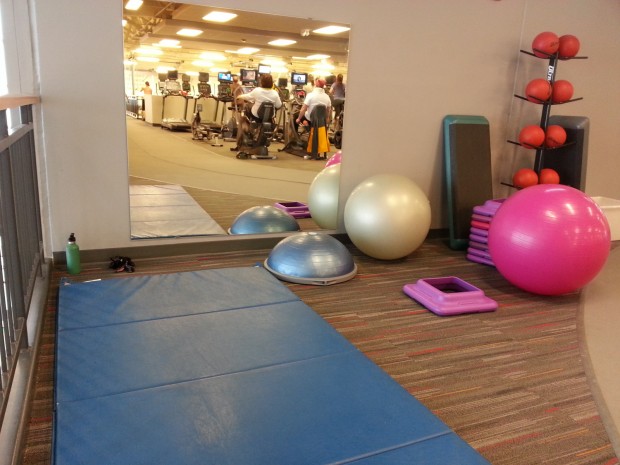 So the big question for both types of falls: What can you practice so that you’re more likely to override your instincts to stick out your hands and arms?

I’ll soon blog about the drills for the OTB scenario but for the remainder of this post, I’m going to focus on the technique of hanging onto the handlebars for crashes where you slide out sideways at speed. I first learned about this in Ned Overend’s 1999 book, Mountain Bike Like a Champion: 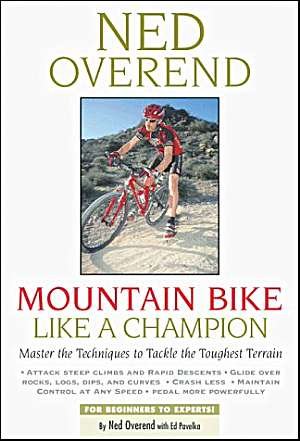 In Chapter 18, Crashing: the right instincts reduce the damage, he writes:

Depending on what you’re going to land on, one way to reduce the chance of serious damage is to hang on to the handlebar. Keep your hand on the grip and turn the bar so the end hits first. Ease yourself onto the ground by landing with your hip. arm, and shoulder in sort of a rolling motion. This technique works on soft surfaces, but you may need to use an outstretched arm if the ground is full of roots or rocks—things too hard for a hip to take. If you reach out, do your best to absorb the impact by collapsing your elbow, as if lowering yourself from a one-arm pushup.

A more detailed explanation of this hang-on-to-the-handlebars technique is in William Nealy’s 1992 book, Mountain Bike! A Manual of Beginning to Advanced Technique: 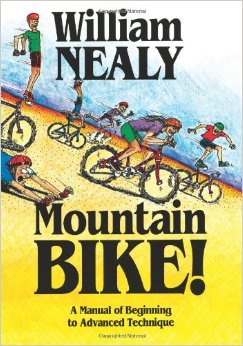 In his chapter titled Crash Wisdom on page 91 he writes:

At medium to high speeds it is best to remain attached to the bike, relax and roll onto the ground. This is sort of a modified “Parachute Landing Fall” with the bike & rider hitting the ground sequentially, spreading out the shock. An ideal ground-contact sequence would be 1) foot and pedal, 2) calf -> thigh -> handlebar, 3) hip -> forearm -> arm -> shoulder. 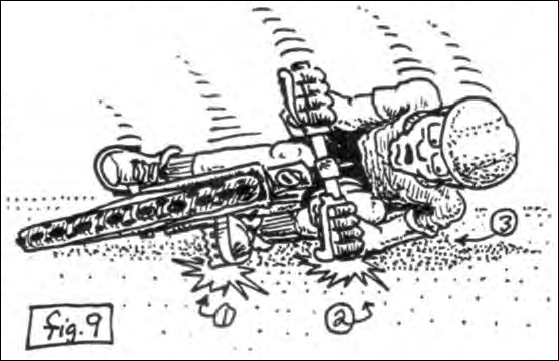 The bike itself absorbs much of the impact in the pedal/crank and the end of the handlebar. Staying connected to the bike and relaxing are the keys to a painless sideways fall at speed! You should practice this technique on soft turf to train out the understandable tendency to check the fall with your arms. Repeat till you’re rolling onto the ground smoothly with your arms and feet remaining firmly attached to the bike.

A few weeks ago, towards the end of the groomed singletrack (#ridegroomed) winter mountain biking season here in southern Minnesota, I got a ride in at Lebanon Hills and took advantage of the remaining snowpack to try this technique at slow speeds:

Falling practice in snow – keeping hands on bars from Griff Wigley on Vimeo.

I was surprised that it was a bit harder to overcome my instincts to put out my foot than my hand/arm, but I was encouraged when a mile or so down the trail, I actually did accidentally slide out and I hung onto the bars. I returned home and did the same drill on an air mattress in my basement office, trying to visualize myself on a bike sliding out:

I’ve been reluctant to practice this hang-on-to-the-handlebars technique at higher speeds on soft dirt or grass as William Nealy suggests, as I’ve not felt confident that I could do it without some pain–even with wearing all my protective gear.  But when an early spring snowstorm dropped 10 inches of wet snow on my hometown of Northfield last weekend, I took the opportunity to practice, first in the deep snow and then on snow that was packed down by kids sledding.  This video is a narrated screencast:

How much practice do I need before this maneuver becomes more instinctual than sticking out my hands and arms? I don’t yet know. With spring due to return this weekend, I’m likely done for now. No grass/dirt practice for me. Instead, I’ll rely on mental rehearsal. What could happen? 😉

In the meantime, consider subscribing to my free Thick Skull MTB Skills Newsletter. You’ll get the FREE 6-part series, “Light Hands, Heavy Feet”: 17 mountain bike drills to develop the “light hands” habit and make your riding more stable no matter what the terrain. 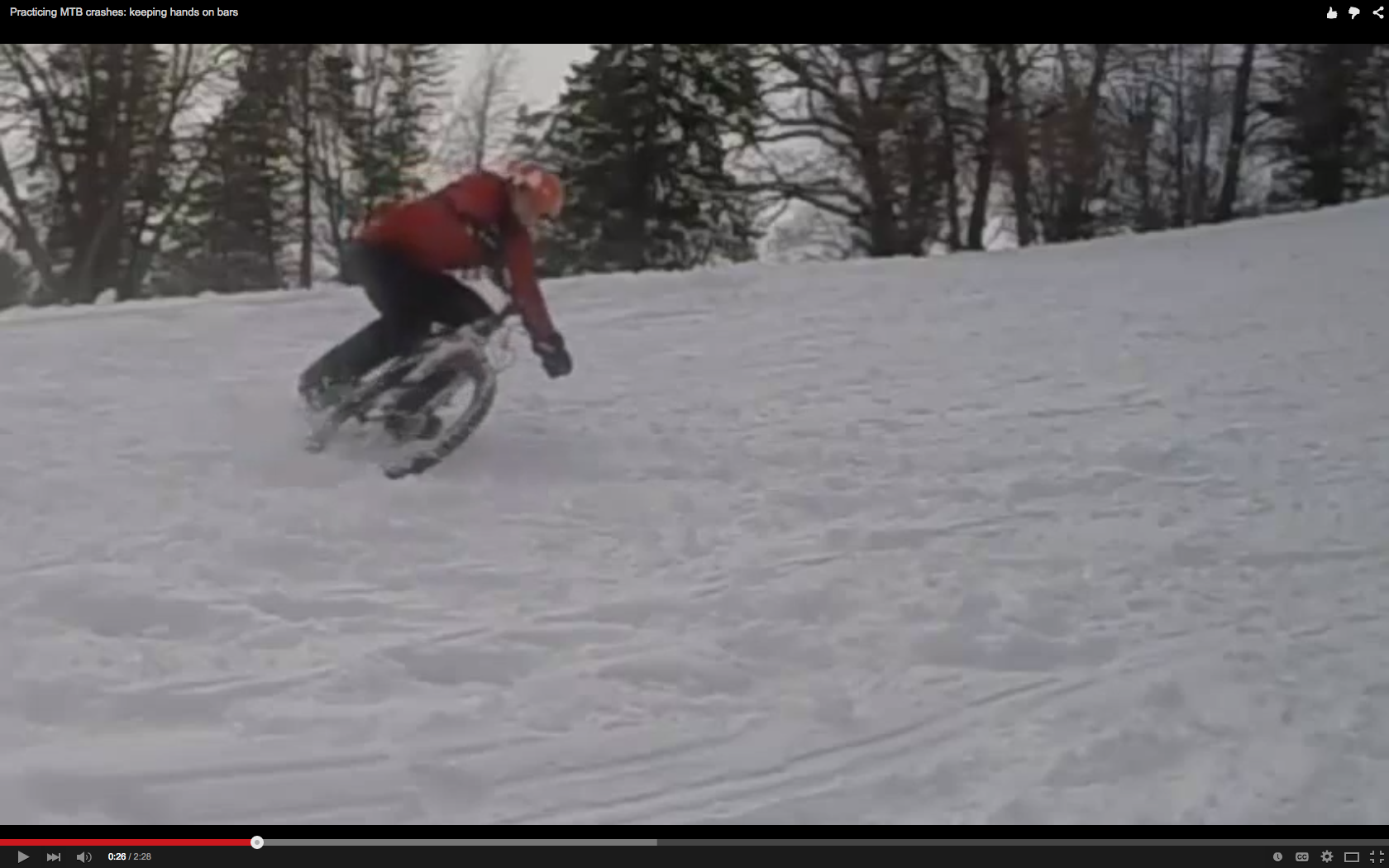 Not the latest article, but I’ll bite anyways. I inadvertently did a lowside hip/chest hold onto bars drop on some ice when the back wheel slid sideways due to ice (fatbike).

In one sense it worked well, no broken arm or shoulder. My hip was sore (#1) and my ribs were also sore, they were the second point of contact (via my arm tucked to my side).

Nice to see that I am not in left field in what I chose to do for this. Main reason I held on was because I was convinced that if I put my hand out, it would have just slid to the side – there would have been no purchase due to the ice.

I now ride studded tires in the winter. Before the fall, I thought they were for sissies.

Interesting article. What are your thoughts on sticking out your leg to “catch” your slide? This instinct has saved me numerous times. I’m not sure about hanging on to the handlebar anymore as one time, my right inner thigh (I’m beefy there) landed on one of the pedals. I could’ve sworn, a worse landing might have stabbed or damaged my thigh severely. Correct me if I’m wrong but we have lots of vessels and a major artery in that region of our body.