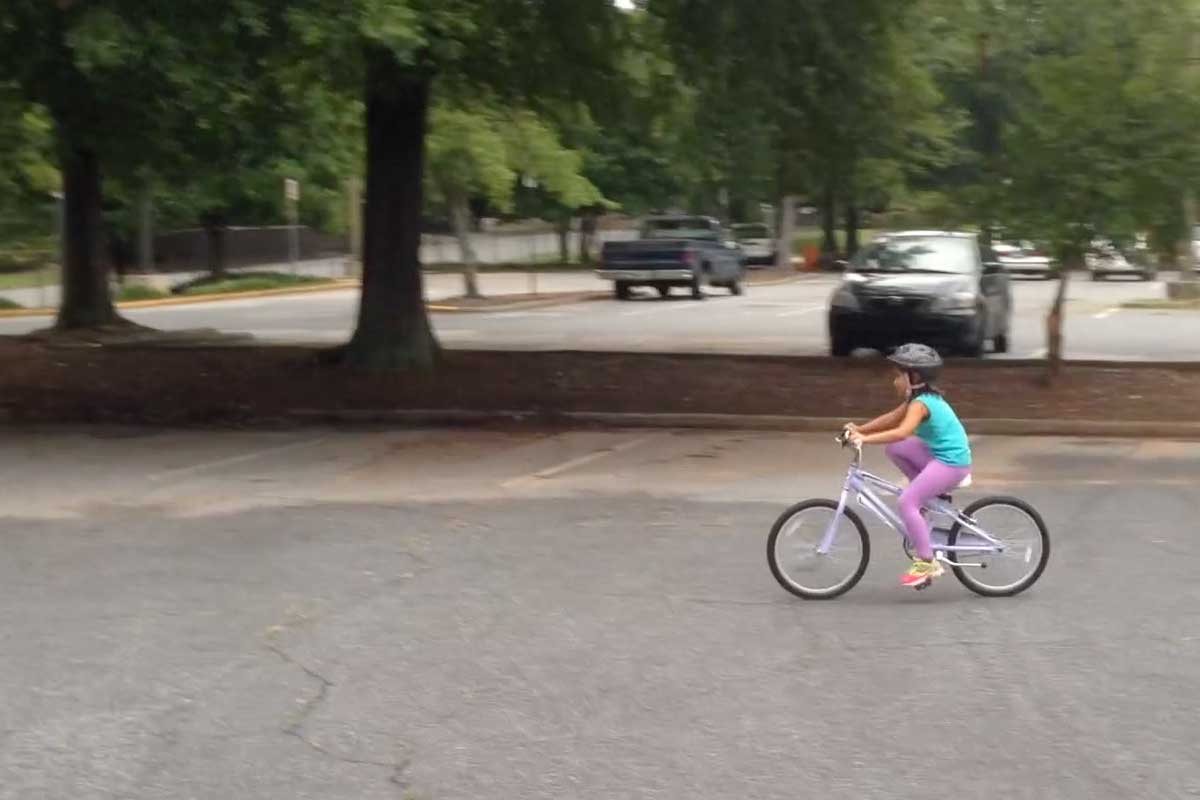 Ok, so I lied in the title: I didn’t actually teach my kid to ride her bike. She basically taught herself, so it seems a little dishonest to take any credit for her accomplishment. Still, I learned a number of lessons leading up to the big moment (pictured here), which I thought I’d share with all the parents of young kids out there.

Leah and I are obviously really into mountain biking (we started Singletracks nearly 10 years before we even had kids). so we assumed our kids would be bike nuts just like us. We bought one of those balance bikes (a wooden one) and after our daughter showed zero interest in it, we thought, maybe it’s just too heavy/tall for her? So we bought a Strider, which was much lighter and lower… and she ignored that bike too.

Not only did she ignore the bike, but she would complain every time we tried to get her onto the thing to practice. Then, a funny thing happened a couple months ago: at 6-years-old, our daughter said she was ready to ride a bike. At this point the only bike we had for her was a 20″ Novara without training wheels, and I was really dreading how difficult it was going to be to teach our “strong-willed” daughter without any real training aids.

I took her to an empty parking lot near our house, and after getting her steady on the bike, I gave a little push, and she was off! The girl literally rode circles around the parking lot while I stared in disbelief, then she proceeded to come to a (mostly) controlled stop and stepped off the bike (video still below). Like I said, I can’t take any credit for this, but it did teach me some valuable lessons about parenting!

1. Forcing young kids to do things they don’t want to do can be a losing battle.

Listen, I’m the last person to tell anyone how to parent their kids and truthfully, there are plenty of things parents already have to force kids to do on a daily basis (like bathing, eating, sleeping, etc.). However, I found bike riding isn’t one of those things, at least for my oldest. It wasn’t until we stopped nagging her to try riding her bike that she finally did it.

Of course, I know this won’t always work as our kids get older. As a high schooler, I probably would have quit running track if my parents hadn’t (essentially) forced me to stick with it. So maybe this lesson is about picking important battles, rather than forcing certain issues. Yes, biking is important… but maybe it’s not the most important thing right now.

2. Let your kids learn and grow by suppressing your instinct to protect. 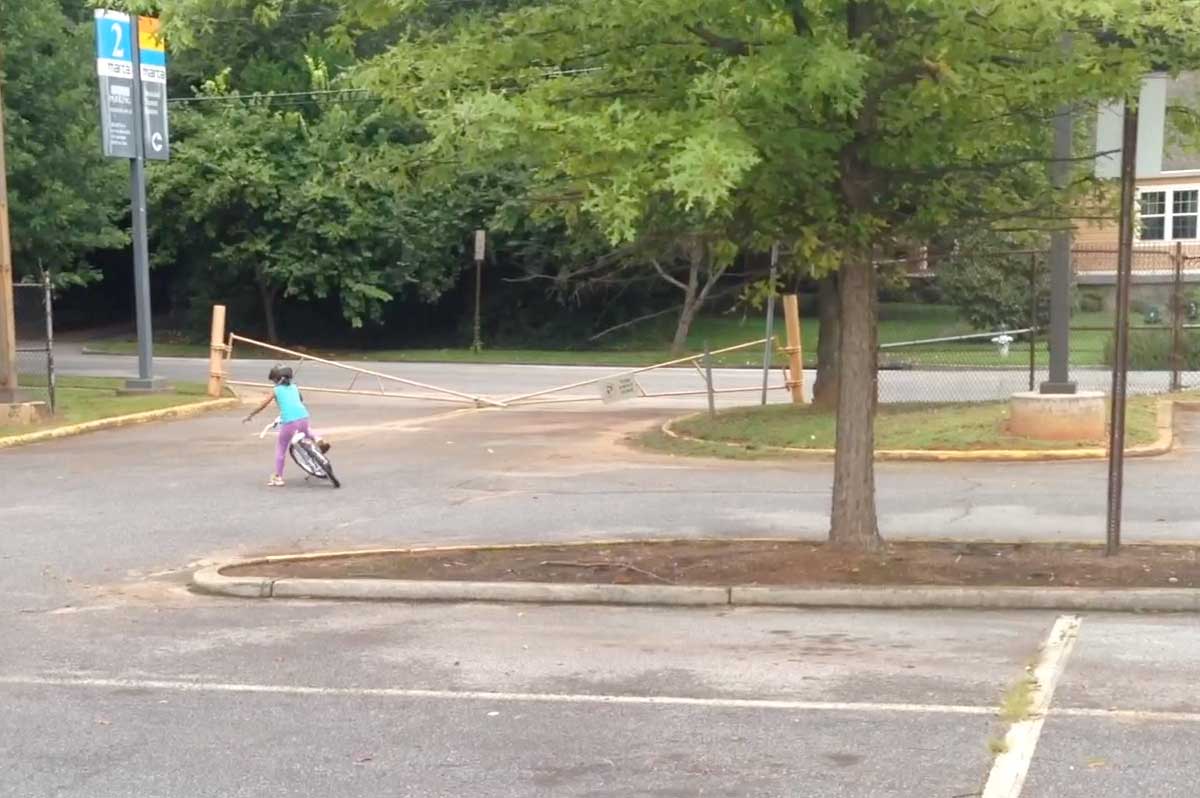 There have been so many times I’ve wanted to steady my daughter on her bike when she’s starting to wobble or to warn her about turning too sharp in the corners but: a. that just pisses her off, and b. my words aren’t as memorable as the pain of falling off her bike. Yeah, it might sound a little harsh to say that I’m going to allow her to get hurt so she learns, but that’s just part of life.

One of my favorite “lessons” so far came when our daughter fell while waving to some of her teachers as they exited the school. As soon as she stopped focusing on riding, she hit the pavement. In that instant, she learned about focus, pride and humility, and heck, the coefficient of friction on a set of bike tires!

3. Don’t underestimate the resilience of youth.

Our daughter has taken some pretty rough falls (well ok, not that rough–just scrapes), and every time my first reaction is to say, “Are you ok? We can stop practicing now if you want.” And without fail, every time, she embarrasses me for even suggesting quitting by saying, “No, I want to keep going!”

Maybe the freedom of adulthood has made me soft, but I generally stop doing stuff that hurts or isn’t fun anymore. But she seems to understand the bigger picture somehow; that if she keeps trying, she’ll get better, and that it’s worth getting scraped up a little on the way to her goals. I need to remind myself of that more often.

4. Encourage your kids… but don’t fake it or overdo it. 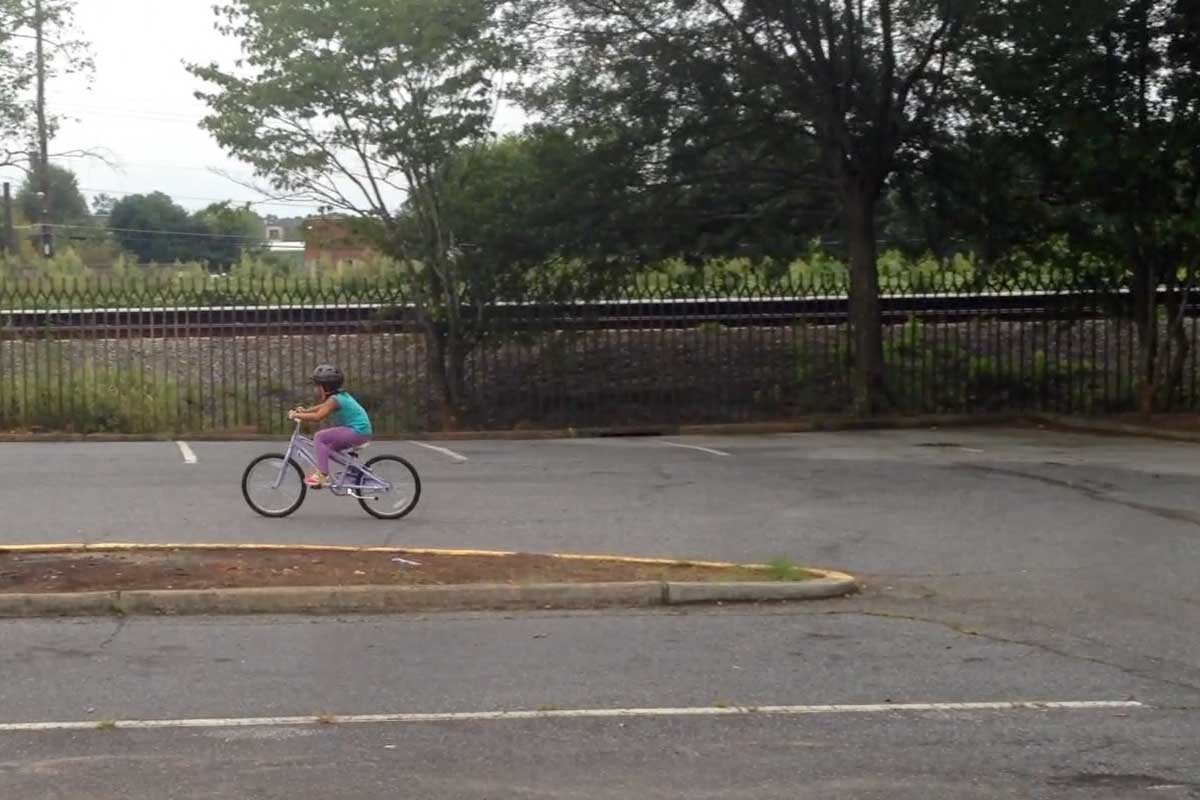 As American parents, we can be accused of handing out too many “participation medals” to our kids and the thing is, most kids can see right through false praise. For a while I kept telling our daughter what a great job she was doing, and it helped initially. But eventually I could tell she just wanted me to shut up so she could enjoy the ride.

5. Every kid is different. One size does not fit all.

It’s tough being a parent. Nobody really knows what they’re doing, especially with the first kid, so it’s natural to look to other parents for advice. But the thing is, kids have different needs and abilities, so it’s a constant struggle to find what works for your kid.

I can’t tell you how many people told me that the balance bike is the one and only way to teach kids to ride a bike. But you know what? It didn’t work for my kid. Will it work for your kid? Maybe, I don’t know–there are a lot of ways to skin that cat. Heck, I wouldn’t be surprised if something entirely different works for our younger son when he’s ready to ride a bike.

6. We should believe in our kids.

When our daughter said she was ready to ride a two-wheeler, frankly I didn’t believe her. I could have dismissed her and told her she wouldn’t be able to do it (which is what I secretly believed), but I decided to give her a chance, really just to prove to myself and to her that she wasn’t ready. Call it an honest skills assessment.

Maybe she wasn’t surprised when she took off on that bike all by herself, but I sure was! That experience taught me that maybe I should listen to my kids more often and cut back on telling them what I think I already know.

7. Buying stuff for kids isn’t a substitute for spending time with them.

I kinda hoped that by having a balance bike sitting in the corner our daughter would just pick it up and start messing around until she learned to ride it. Obviously that didn’t happen. Heck, we bought multiple balance bikes, but that wasn’t the answer.

The Novara bike our daughter would eventually ride isn’t something she can use on her own; we live on a super busy street, so riding bikes requires either walking or driving somewhere. Letting her ride her bike is usually a big hassle but in the end, it’s so worthwhile to be able to spend time together doing something she loves.

At the beginning of this whole process, I thought I was the one teaching my daughter to ride a bike but in the end, I was the one who got schooled. Life is all about learning lessons, no matter how old we are, and I’m really thankful for all biking has taught me as a rider–and now, as a parent.

Now will you guys teach me to ride a bike?