The skill of riding straight–holding a line, as it’s commonly called–is one of the most fundamental mountain bike skills.  It’s not just used for riding skinnies, like the length of logs, planks, and elevated boardwalks, but staying on your line through rock gardens or along a section of narrow singletrack where precision matters. 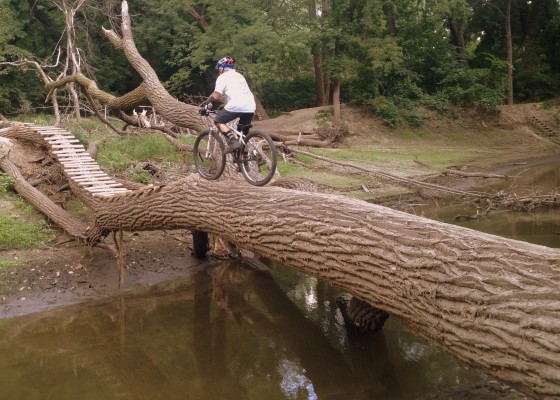 But just like the skill of “light hands, heavy feet,” you rarely hear anyone saying that they’re going out to practice “holding a line.” It’s not sexy, like practicing cornering, jumps, or bunny hops.

When used to ride an obstacle like a skinnny, “holding a line” tends to be an all-or-nothing affair. You either make it or you don’t, and it’s plain for everyone to see.  And if the height of the obstacle is beyond your comfort/confidence zone, you may pay a price (damaged bike, body, ego) by not making it.

It’s often assumed that you can get better at holding a line just by doing a lot of it.  And yet I often hear very experienced mountain bikers say “I hate skinnies.”  They’ve reached their current level of skill without thinking too much about it, but haven’t figured out how to go beyond it.

With any complex skill, however, having a progression of exercises and drills to practice is often the best way to not only develop competence, but to gain confidence.

For Part 1 of this holding a line series, I primarily focus on exercises and drills to improve your ability to lean the bike, what the mountain bike instructors refer to as side-to-side bike/body separation. 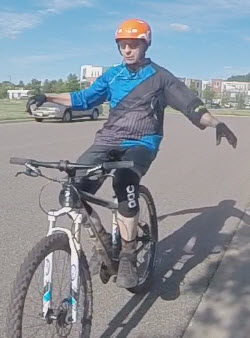 Get on your bike (any bike) and ride it no-handed, both pedaling and coasting. If you’re able to do it more than 5 seconds, think about what your body is doing to make it happen. If you’re like most people, there’s a vague sense that some combination of waving arms and knees, along with core body contortions, all add up to enough “balance” that makes no-handed riding possible.  Sorry, that’s not good enough.

Exercise 2: Push the bike by its seat

One way to discover the answer is to stand beside your bike and push it with one hand on the seat and try to get it to go in a straight line at walking speed.  Want more of a challenge? Push it in figure 8s. 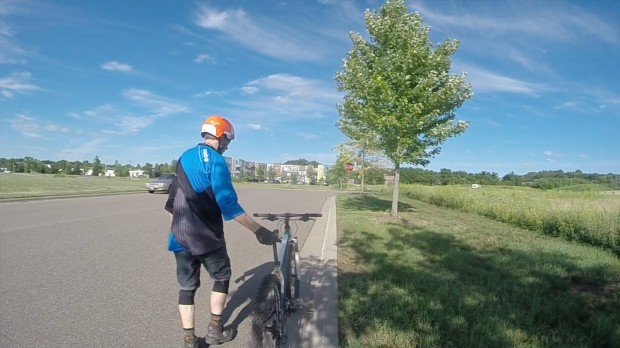 At slower speeds, the bike gets more wobbly but even then, you can get a feel for how the direction of the bike can be controlled by leaning. When you’re riding no-handed, you’re steering the bike primarily by using your hips on the saddle to lean it left and right. 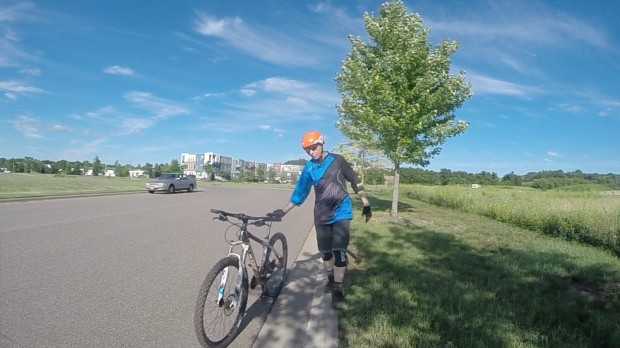 You’re probably not going to be doing a lot of no-handed mountain biking, at least not on purpose, so you’re probably wondering what this type of leaning has to do with holding a line. Just one word:

In the clinics I’ve attended, instructors have held the front wheel of the bike to balance it so students could experiment with various bike/body positions without the distraction of the bike moving. 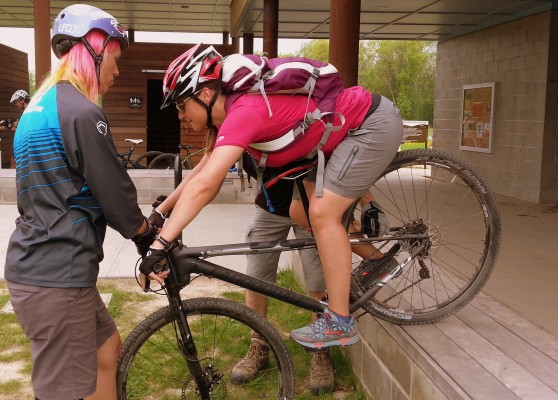 This doesn’t work well for leaning or side-to-side bike/body separation because the instructor’s hold on the bike’s front wheel with their hands and/or legs restricts the lateral movement of the bike. 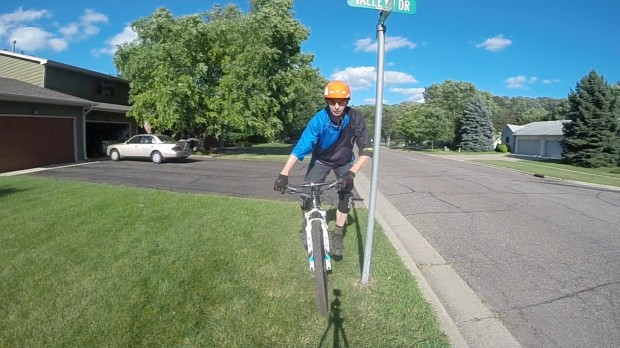 What does work? The pole of a street or stop sign, or a tree with a trunk that’s about the same circumference. 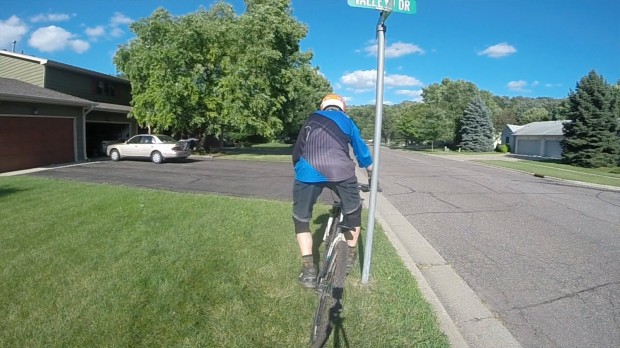 You balance yourself against it with your elbow and then flip the bike from side-to-side. There’s enough clearance for your handlebars to extend beyond the plane of the pole.

Once you feel comfortable flipping the bike from side-to-side against a pole or tree, then team up with a fellow mountain biker for some resistance leaning. Huh? 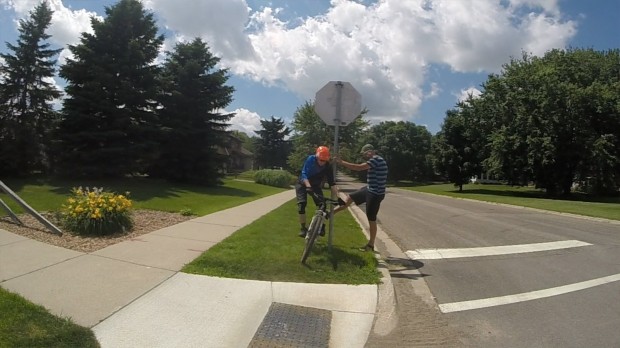 Balance on the bike with your elbow against the pole like you did before.  Then gradually lean your bike towards the pole. When your weight feels centered, have your buddy push lightly on your saddle as if to straighten the bike to a more upright position. Resist! Discover what’s needed in the way of handlebar pressure to counter their push so as to keep the bike leaned over.  As you get better at it, have them gradually push harder so that you have to resist harder. 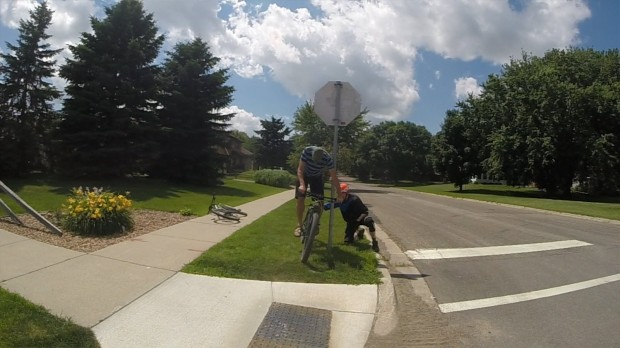 Then trade places. It’s as important for you to feel what it’s like to be the pusher as it is for you to be pushee.

Lower your seat, stand on your pedals, and then slowly pedal in a fairly tight circle while leaning the bike. 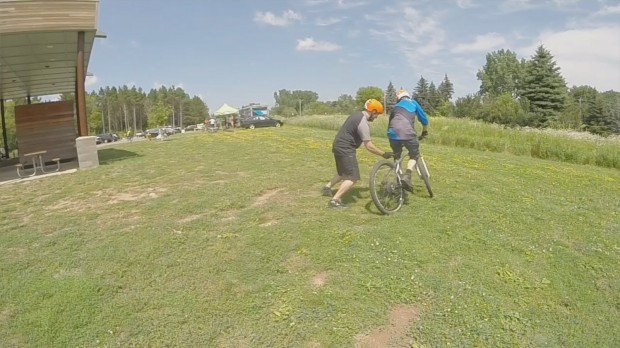 Have your buddy walk beside your bike and lightly push the bike sideways by its seat, again, as if to straighten the bike to a more upright position so that you’ll go straight instead of turning.  Again, resist! And again, as you get better at it, have them gradually push harder so that you have to resist harder. 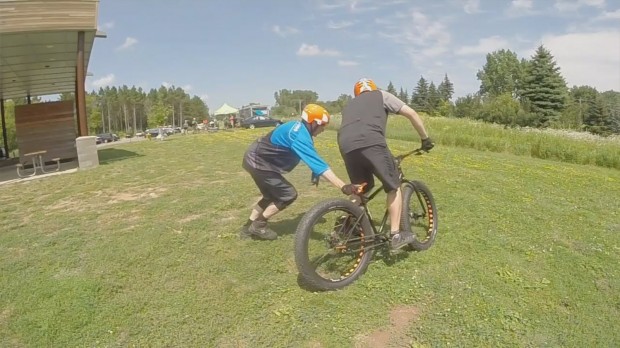 Do what it takes to hold your lean. Then switch places.

Those five bike-leaning exercises above don’t translate directly to skills on the trail. They’re designed to get you more familiar with side-to-side bike/body separation and a taste of the stability that’s possible as you get better at leaning the bike when the terrain demands precision.

You can do drills 1-5 below in your yard or driveway, on a quiet street, or in an empty parking lot. You can also do them with any type of bike, not just a mountain bike.  I sometimes do them with my townie hybrid bike to and from my morning coffeehouse.

The purpose is to starting grooving the side-to-side bike/body separation habit without having to think/worry about falling off anything.

All these drills involve standing on the pedals.

Drill 1:  Lean the bike side to side while coasting in a straight line 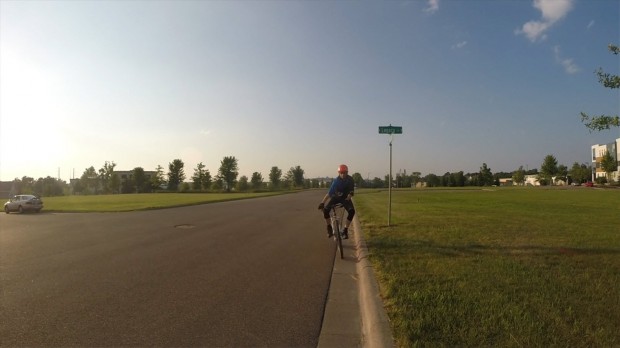 While following a straight line like a crease in the pavement or the edge of a sidewalk, lean the bike from side-to-side while coasting. 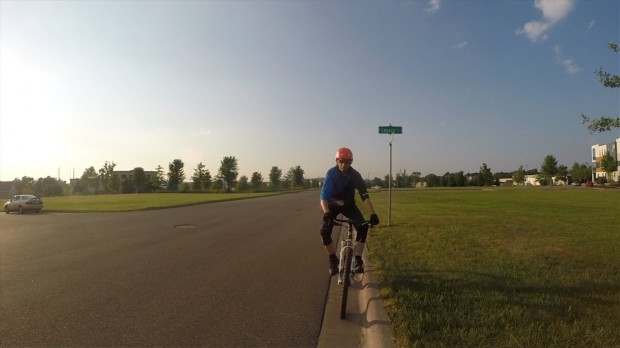 Experiment with an increasingly wide stance (“cowboy legs”) and a corresponding straight arm/bent elbow motion (“windshield wiper arms”). For progression, see how slow you can coast while continuing to flip it side to side.

Drill 2:  Lean the bike side to side while pedaling in a straight line

Repeat Drill 1 but pedaling. Standing pedaling introduces a sideways force that needs to be countered with handlebar pressure to keep going straight. Use different speeds and different gears. For progression, see how slow you can pedal while continuing to flip it side to side. Experiment with pedaling against brake pressure.

Drill 3: Coast in a straight line but with the bike leaned to one side only 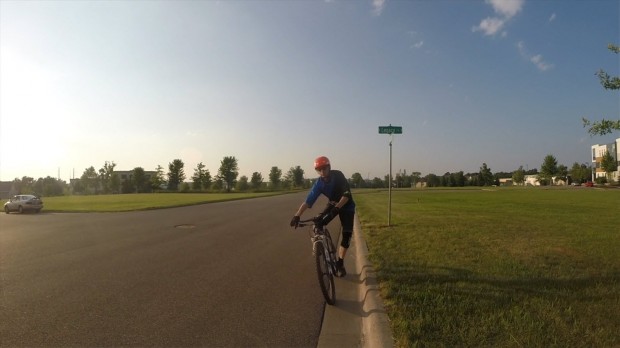 Repeat Drill 1, but don’t flip the bike from side to side. Keep it leaned to one side only as long as possible, coasting to a stop. Then lean it the other way. Experiment with the pedals in a horizontal position vs vertical.

Drill 4: Lean the bike side to side while coasting in circles 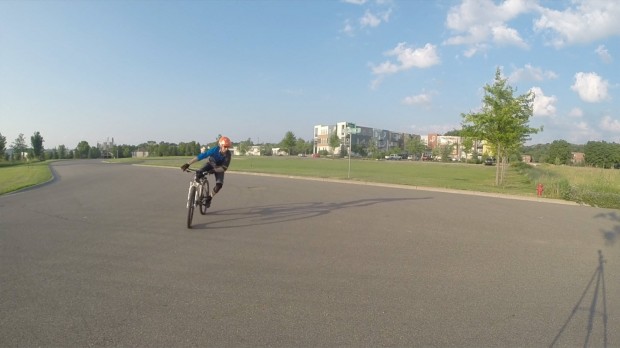 Repeat Drill 1 but ride in circles or figure 8s, not in a straight line.  It’s a different experience for most people to turn a bike’s handlebars to the left while leaning it to the right (and vice versa). It helps prepare your muscles and reflexes for those little automatic maneuvers that help keep your balance in tight situations.

Drill 5: Lean the bike side to side while pedaling in circles

Repeat Drill 4 but pedaling. For a more advanced challenge, pedal against brake pressure.

Most singletrack trails, even those categorized as advanced/expert level, have sections that are easy for you.  What usually happens when riding these segments is that we relax, sit on our saddles, and steer the bike by turning the handlebars slightly.  It works fine on pavement and it tends to work fine on easy/wide sections of trail.  But it’s a habit that’s hard to overcome when the trail gets narrow and demanding. 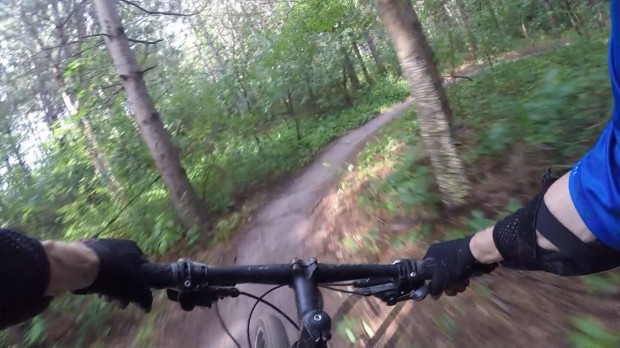 So for this drill, try to turn the handlebars as little as possible while riding these less demanding sections of trail.  Instead, stand on the pedals and concentrate on keeping the bike leaned over beneath you , even when riding straight. 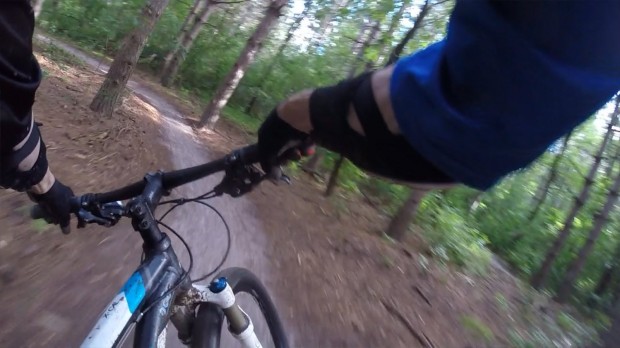 Preview of Holding a Line, Parts 2 and 3

This fall I’ll have a set of exercises and drills related to all these aspects of holding a line:

To be notified when Parts 2 and 3 become available, subscribe to my free Thick Skull Mountain Bike Skills newsletter.

Great article. However, I can ride skinnies close to the ground but am a total wimp when they are high… could you add a “growing a pair” article to the list of upcoming?

Hey Fatlip11, that’s a great idea. That pesky editor Greg probably won’t let me include photos of a ‘pair’ however. 😉

You’re not alone on the fear factor for high skinnies. We all have our limits, even Danny McAskill and Ryan Leech.

I find that the more confident I am about knowing how to bail safely helps. That’ll be my focus of Part 2.

But are you absolutely sure you’re leaning the bike when you’re riding the skinnies that are close to the ground?

My experience is that riders who are pretty good at steering with the handlebars can get away with that when they’re completely relaxed. But anxiety increases the wobbling of front wheel when that method is used on a skinny.

So if you learn to instinctively lean the bike to steer it instead of turning the handlebars, the wheel wobbles less, you feel more steady, the anxiety decreases a little, you get a little more confident, etc etc.

Thanks… will work on that and looking forward to the next set of tips.

Great list….off the ground skinnies are definitely a problem for me. This set of drills should help. Already practiced a few of them!

Good to hear. I’m working on part 2 today which will focus on strategies for those times when you fall off the skinnies.