I ran into Rae Morrison in the waiting room of a small hospital in the Italian Alps, where she was in line to get her hand X-rayed after accidentally punching a rock mid-race. The hospital is everyone’s favorite place to meet up and network, right?

The emergency room in Aosta was a sardine can of mountain bikers from the EWS race in La Thuile, and the Italian National Championship XC and DH races that took place a few kilometers downstream in Pila.

Rae is familiar with the reality of broken bones that accompany number plates, having broken her pelvis and shattered her heel in recent years. This particular visit to the ER ended in a mangled pinky finger that would require surgery, making it impossible to grip the bars properly. While reluctantly spectating EWS round 6 in Whistler, Rae took some time to answer a few questions about her role testing new products and racing for Liv/Giant Factory Offroad Team.

How did you get started with the Liv/Giant Offroad Racing team?

I was a Liv/Giant ambassador for New Zealand in 2015 when I competed as a privateer for a year of the Enduro World Series. I met the team manager of the Giant Factory Off-Road Team and was on their radar after two top 5 results. In 2016 I signed onto the French team racing for Lapierre, and after that team was discontinued, Liv [was looking for] a female racer to represent the new Liv Hail in 2017 on the world stage. It was a very straightforward and easy decision to join the team.

How has your 2018 season been thus far, and what do you have planned for the remainder of it?

The 2018 season has been a big rollercoaster. I had a great offseason and became the fittest and strongest I have ever been but then after a hectic schedule, with 4 weeks of traveling, media events, and racing with no rest and little sleep, I became sick with pneumonia which really knocked me back. I had to take a month off to fully recover and then worked extremely hard to regain my fitness.

[At] the next [EWS] race in Olargues, France I achieved my first ever stage win which was a huge milestone for me and a massive boost heading into the remainder of the season. The following races went really well and I was feeling good on the bike and performing well. Then in La Thuile, I clipped a rock with my hand during the race and broke my finger. I finished the day, but afterward, I went to the hospital and found out the severity of the break required surgery, which I am still currently recovering from.

How have you dealt with recovery time after breaking your finger? Have you been able to train while healing? Any advice for other injured riders?

The recovery has been ok. Having an injury that prevents you from racing and doing what you love to do is always super frustrating. It is really important to stay active during injury [recovery] while obviously being safe and not compromising the injury in any way. It’s a huge shock for the body to go from being super active to absolutely nothing. Without the endorphins you get from exercise and the reduced social time riding with your mountain bike mates, it is really easy to get down and depressed.

I’ve made a big effort to continue being active by using a stationary trainer, going to the gym 4 times a week to work on my legs, and a lot of walking and hiking. I have also made more of an effort to meet up with friends for coffee or dinner and to keep myself surrounded by good people so I am not alone and dwelling on things. It makes a huge difference to your mental well-being while the body heals.

Where did you do the testing with the Intrigue?

I tested the Intrigue in New Zealand during the off-season on a huge variety of trails and types of rides.

What are some of your favorite elements of the Intrigue?

The versatility. The Intrigue is a bike you can take anywhere, and the bike does everything.

What were some of the elements of the bike that Liv changed with your feedback?

I was [part of] the last stage of testing so the bike had already gone through numerous tests and design tweaks before I even knew about it and before the final prototype was produced, which was my bike.

When I received the bike I fell in love immediately and could not fault the design or geometry at all. I rode the bike hard for over 3 months on everything between cycle paths and downhill tracks and I was blown away by how the bike felt and handled everything. Most of the feedback I ended up giving was on the suspension setup with DVO that the top-of-the-line bikes are coming with. I spent a lot of time testing the parameters of different setups, with what felt amazing and what I recommended, and giving that feedback and advice back to Liv.

What riding style or trails do you feel the Intrigue is best designed for?

The Intrigue is your ‘all mountain’ bike that climbs well and is still very agile and fun on the descent. I found it performed outstandingly on the intermediate tracks, the green, blue and black trails (grade 2, grade 3, and grade 4 trails).

Would you (or do you) ever race the Intrigue instead of the Hail in an Enduro? If so, what factors help you select a particular bike for a particular race?

I raced the Intrigue for the Sea Otter Downhill and Slalom races. I chose the Intrigue over the Hail as the tracks were smoother and flatter than your typical DH track and were well suited to a smaller bike. It is nice to be able to choose between the two bikes and there will be times like in Sea Otter where the Intrigue will be faster. 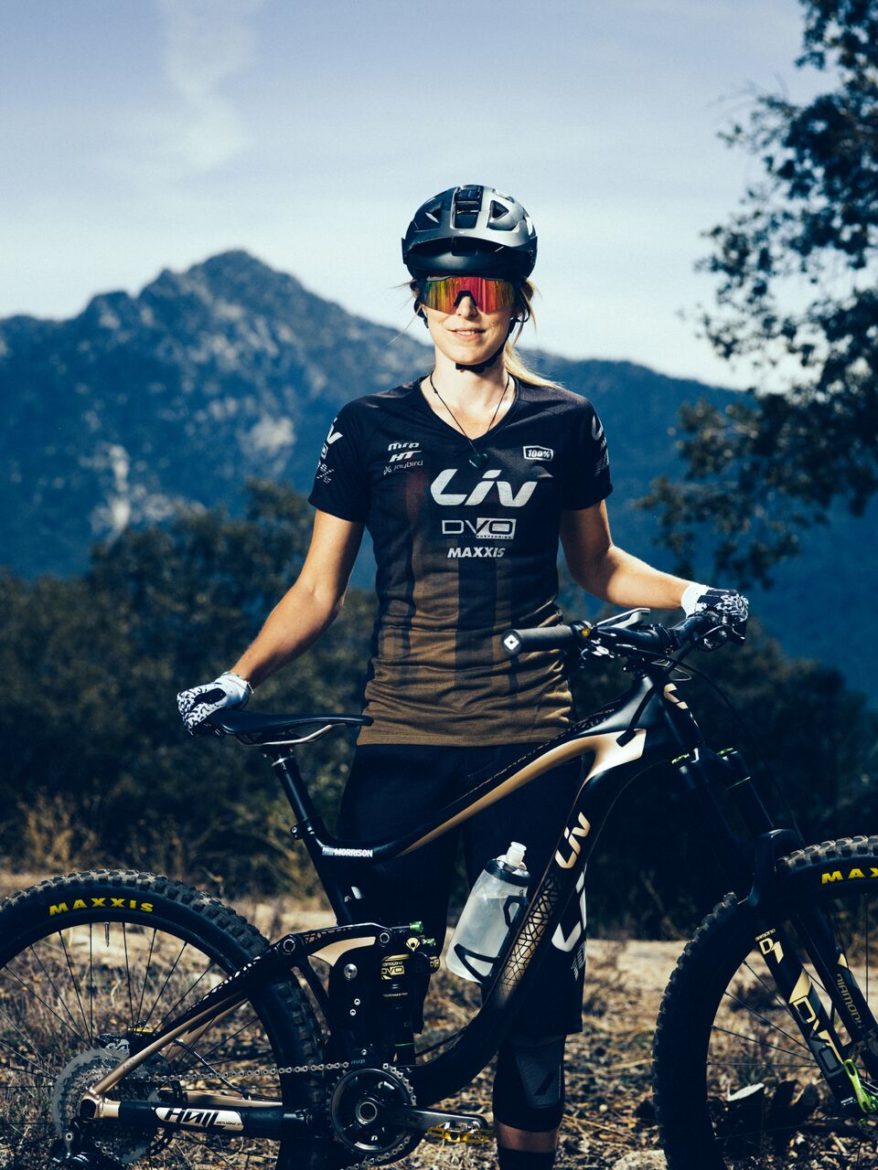 What are some unique elements of your primary race bike? Do you change the setup much from the stock build? What do you change between particular races?

I keep most things stock except for usually the tires. I go for a thicker and heavier casing to preserve the tire for enduro racing where a lot of the time I am riding blind, sometimes riding and landing on things that aren’t the best for wheels and tires. I also spend a lot of time setting up my suspension to suit me and whatever terrain I am on, everything else will be stock for the 2019 bike

What is your favorite race of the season?

I have a few favorite races like the Whistler EWS and Finale Ligure EWS, but one thing I love with the series is all the new venues we get to race, which is always very exciting.

Where do you typically train at home?

I live in Nelson, New Zealand where there [is] a huge amount and variety of riding. I try to do a different ride every day to be good at all-terrain, although I do prefer the steeper, more technical trails. 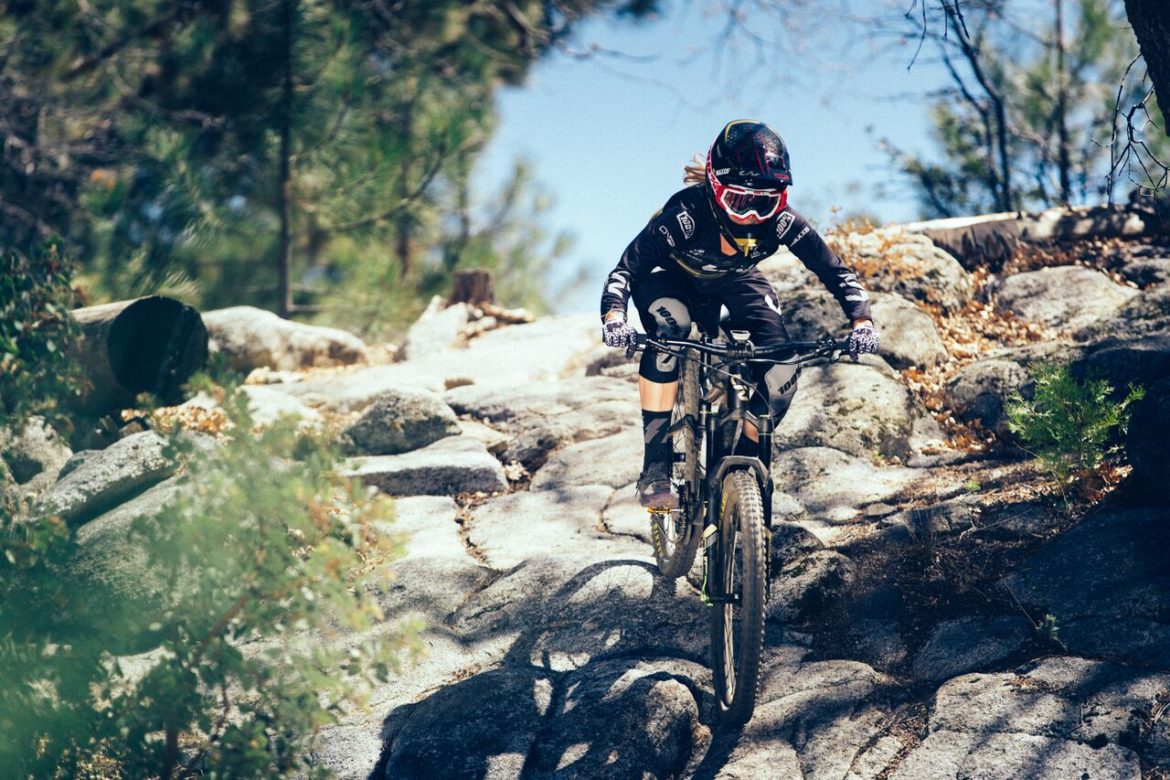 Do you have a saying or mantra that helps you focus at challenging events?

I just heard this quote the other day and really loved it.

It gave me goosebumps as there are times where you feel you have a lot of bad luck and everything is going against you. It’s really cool when you can rise above it all and come out on top.

Apart from cycling, what is a hobby or interest of yours?

At the moment cycling consumes most of my time, although I am totally addicted to Netflix [right now]. I binge watch a lot of series.

Well, there you have it. This elite-level enduro racer relaxes with the laptop glow of a favorite television series on her face, just like so many of us.

The remainder of Rae’s 2018 race season is dependent on how quickly her hand heals, but I am sure we will see her at the top of the results list the day after her doc gives the okay. In the meantime, you can follow Rae as she pushes Liv/Giant bikes to their literal limits here.

Progression
Have you Ever Attended an In-Person MTB Skills Clinic?
Community
You Don't Have to Love Suffering to Mountain Bike, But...
Gear
How Do Carbon Mountain Bike Frames Break? Shawn Small of...
Community
A Growing Movement Aims to Simplify Trail Etiquette Through Old-Fashioned...
Subscribe
Login
Please login to comment
1 Comment
Most Voted
Newest Oldest
Inline Feedbacks
View all comments