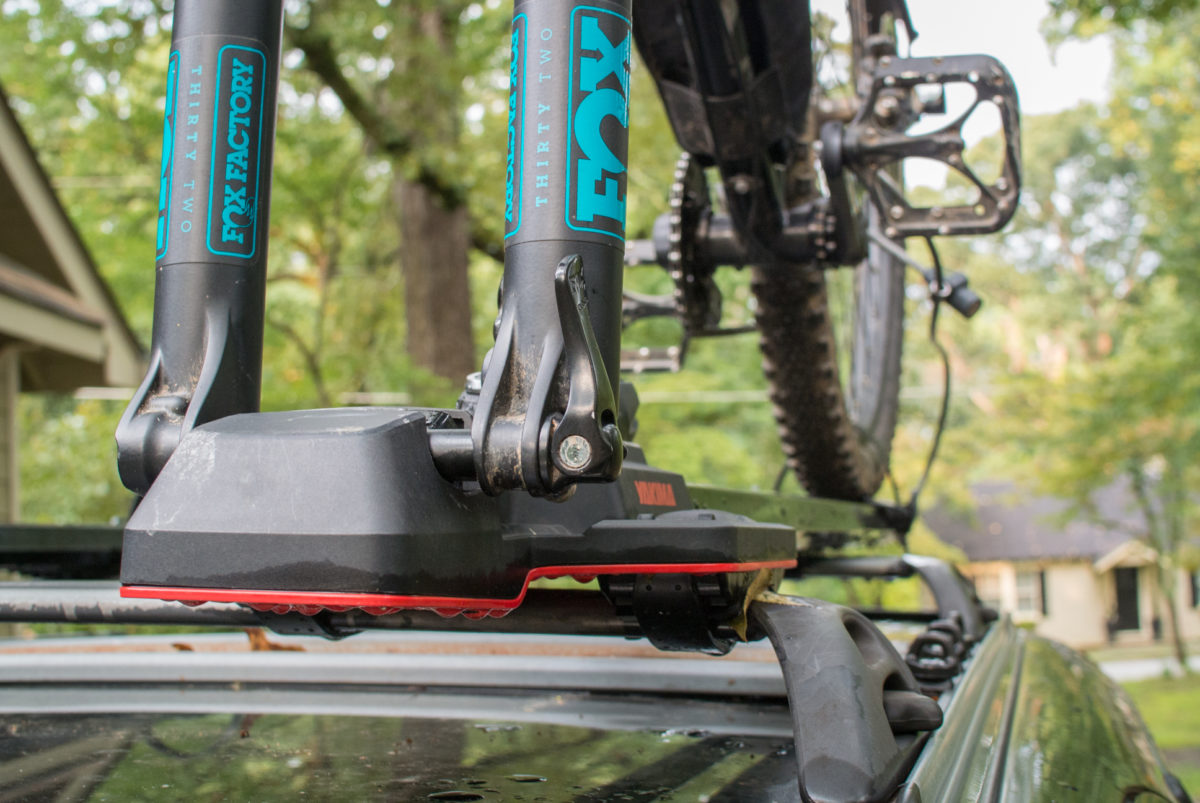 Out of all types of bike racks, hitch racks garner the most coverage on our website, but roof top racks are still a great choice for many mountain bikers. For one, smaller cars can’t take a 2-inch hitch which limits their capacity to two bikes, in some cases three, tops. If you live in a city, raising and lowering your hitch rack or removing it altogether is a hassle. Also, bikes on a hitch rack are more exposed to grit, grime, and dust from the road. And they’re more susceptible to damage from a rear end collision.

Of course, roof top racks come with their own limitations, but they allow you to get around the problems mentioned above. Over the spring and summer I used a pair of Yakima’s latest fork-mount roof tray, the HighSpeed, to supplement my hitch rack. Previously, I used Yakima’s excellent FrontLoader trays which allow you to leave the front wheel on the bike. These were great on my low-to-the-ground Subaru Legacy, but when I switched to a 4Runner, getting a complete bike that high up was a major pain in the ass. Especially when I was worn out from a long ride.

The first thing you’ll notice about the HighSpeed trays is the low profile design. It features a wide tray, but it’s not nearly as tall in side profile as Yakima’s previous offerings. Even the mounting system itself is slimmed-down and refined compared to the FrontLoader. My truck isn’t the quietest thing going down the road in the first place, but I didn’t notice any additional noise coming from the trays.

You can mount just about any bike with any front axle configuration imaginable on the HighSpeed. In fact, the only time you need an adaptor is if you’re mounting a bike with a quick release axle. Thankfully, Yakima includes these adaptors in the box, so there’s no need to purchase anything additional. Bikes with 12mm, 15mm or 20mm thru axles, and Boost or non-Boost spacing will work just fine. Furthermore, those wide trays and generously long wheel straps will take up to 5″ tires. No need to break out the bungee cords.

Unless I’m installing a majorly complicated component, I like to see if I can figure it out on my own without using instructions. Yakima’s HighSpeed trays get high marks here for intuitiveness. It took longer to remove the trays from the packaging than it did to mount them to my vehicle, even not knowing what I was doing. And, I didn’t need to break out any tools to get the job done. The HighSpeeds use an elegantly simple mounting system consisting of rubber straps that get tensioned via a thumbwheel. This system allows the trays to work with square, round, or oval-shaped crossbars.

Yakima built a cable lock into the back of the HighSpeed, which they call the “TailWhip.” There are also locks at the crossbars and for the TorqueRight knob. Lock cores are not included with the trays though, so you’ll need to purchase those separately. The TailWhip is pretty beefy as far as cables go and it’s long enough to reach around your rear wheel and frame. That said, any cable lock is easily defeated with a pair of bolt cutters, so it’s best to add a u-lock to the mix if you’re leaving your bike unattended for long periods. 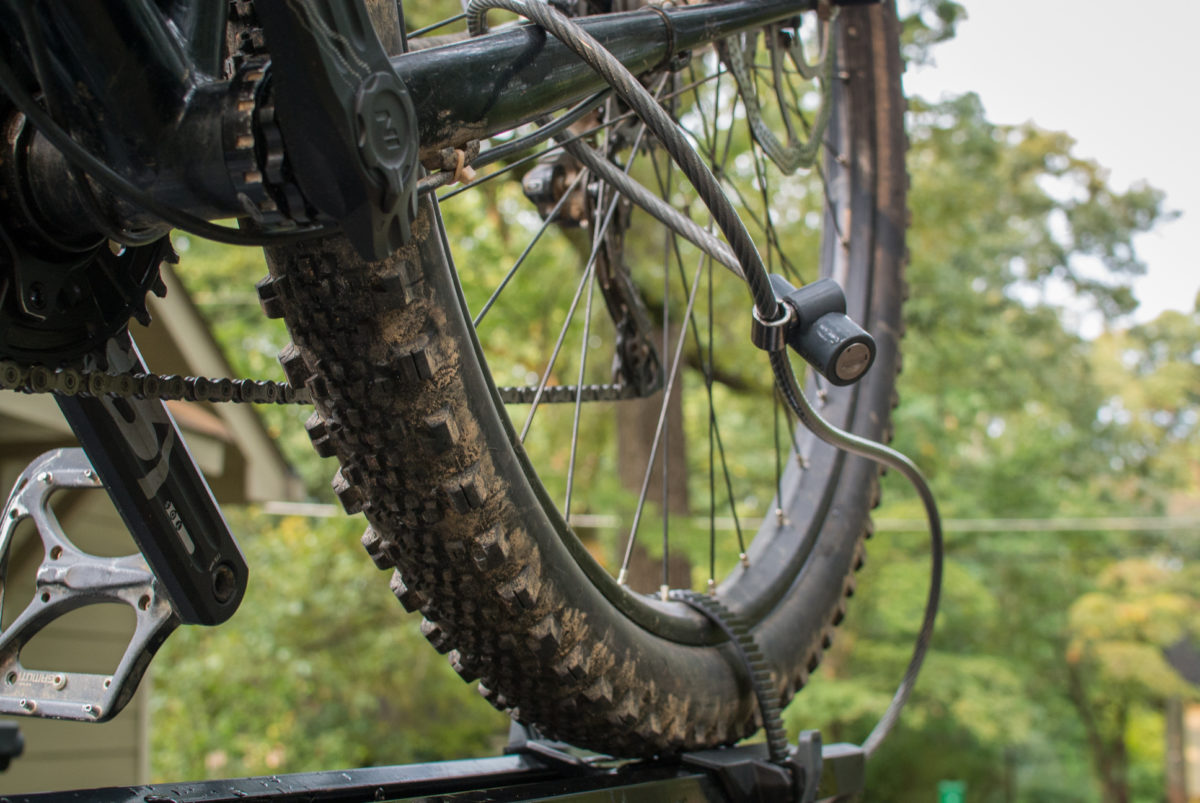 Putting a bike in the HighSpeed is straightforward. Remove your front wheel and put the front axle back in the fork. Lift the bike onto the tray and use the TorqueRight knob to clamp the axle down. Similar to how the gas cap on your car works, the TorqueRight knob can only be tightened down so far before it simply clicks and spins. So no matter what diameter axle you have, as long as you hear the knob click, you know it’s tight enough. After that, strap your rear wheel down and you’re ready to roll.

After a few months of regular use, the HighSpeed trays have proven themselves a great match for the active mountain biker. The rubber strap mounting system kept the trays in place and the wide axle clamp minimizes any side-to-side wiggling of the bikes. I may have even donut-tested the HighSpeed in a big grassy field without any ejections. Maybe.

Note that I did find one particular axle that didn’t play well with the HighSpeed though. My buddy’s RockShox Reba uses a Maxle Lite that is machined out in the middle. The missing material creates long grooves which made it difficult for the HighSpeed’s clamp to find purchase. We did a few shorter trips with his bike up top and it was fine, but I’d be hesitant to head out on a cross-country road trip with the Maxle Lite.

All in all, the HighSpeed fork mount trays from Yakima have impressed with their low-profile design, versatility, and ease of use. Durability over the first few months has been stellar, and if they are anything like previous Yakima trays I’ve owned, they have a long life ahead of them.

Thanks to Yakima for providing the HighSpeed trays for review.