If ever I build a “bug-out bike” that can roll through the rubble unscathed, I will likely mount a WTB Verdict tire at the helm, and their trusty Judge tread astern. These tires are doubtlessly robust and grip the trail like teenagers clutch their cellphones.

The Verdict is a new front-specific tread for 2019, while the rear-oriented Judge has been available since the summer of 2018. I spent a good deal of time sliding down mountains on the pair over the summer, and have a largely glowing report of their performance.

The Verdict up front

Tubeless setup with both of these tires was so simple that it’s not worth mentioning beyond this sentence.

The Verdict is available in a regular version with widely-spaced knobs that closely resemble a worn mud tire, and a “wet” variation with sky-scraping spikes that are clearly designed to dig in the slop. The 29″ and 27.5″ diameters are only available in a 2.5″ width, with either TCS Tough casing and High Grip tread compound or TCS Light casing and High Grip With Slashguard options. Knowing I would be racing some stoney trails on the tire combo, I went with the TCS Tough casing and maximum root-sticky grip.

The Verdict’s 2-ply casing is tank-tough, to the point that when the tire is not mounted on a wheel it holds its circular shape if leaned against a wall. This rigidity allows riders to run slightly lower pressure without worrying about the tire folding under the rim in fast turns or snake-kissing rocks. The inflated tire holds a square posture that requires a little less lean to engage the outer knobs, allowing the shoulder tread to bite confidently on off-camber trails and flat turns. Tried as I might to skewer the sidewalls, I did not manage to test any puncture plugs or fancy tubes with the Verdict. It held air and sealant with aplomb.

The center and shoulder knobs on the Verdict are wholly shaped with fast and rough descending in mind. Each piece of the tread is siped to maximize its grip qualities, and the center tread is slightly ramped to help keep it rolling smoothly. Those ramps remain steep enough that the tire has a powerful braking grip when it’s in an upright position.

Given that gripping rough trails at high speed is the tire’s sole objective, its soft rubber does wear faster than others and it requires a few additional watts to reach to the top. The traction and seemingly flat-free protection characteristics are well worth those small tradeoffs for folks who laugh aloud while pinning it downslope.

In the photos above you can see that there are wide gaps between the center and shoulder-knobs. According to WTB, “abundant open space between all knobs allows the tread pattern to dig through the driest days of summer and fling mud in the wettest months.” The tire proves their statement true. It is not designed for riding flow trails, or “buffed out” smooth singletrack. On those pavement-like ribbons, I could feel the transition between the center and side tread, and it was a bit unnerving. I have only managed to slide the tire out once on a packed-gravel berm, but I would prefer a more uniform tread for flow trails. When riding the loose natural tracks I prefer, the Verdict is near perfect.

The closest comparison tire to the Verdict is likely the Maxxis Assegai 3C with a Double Down casing. The Verdict feels slightly more rowdy-ready, where the Assegai might slide closer to an all-around gravity tire, and the tread on the Verdict feels a bit softer — at least according to my un-scientific squeeze. 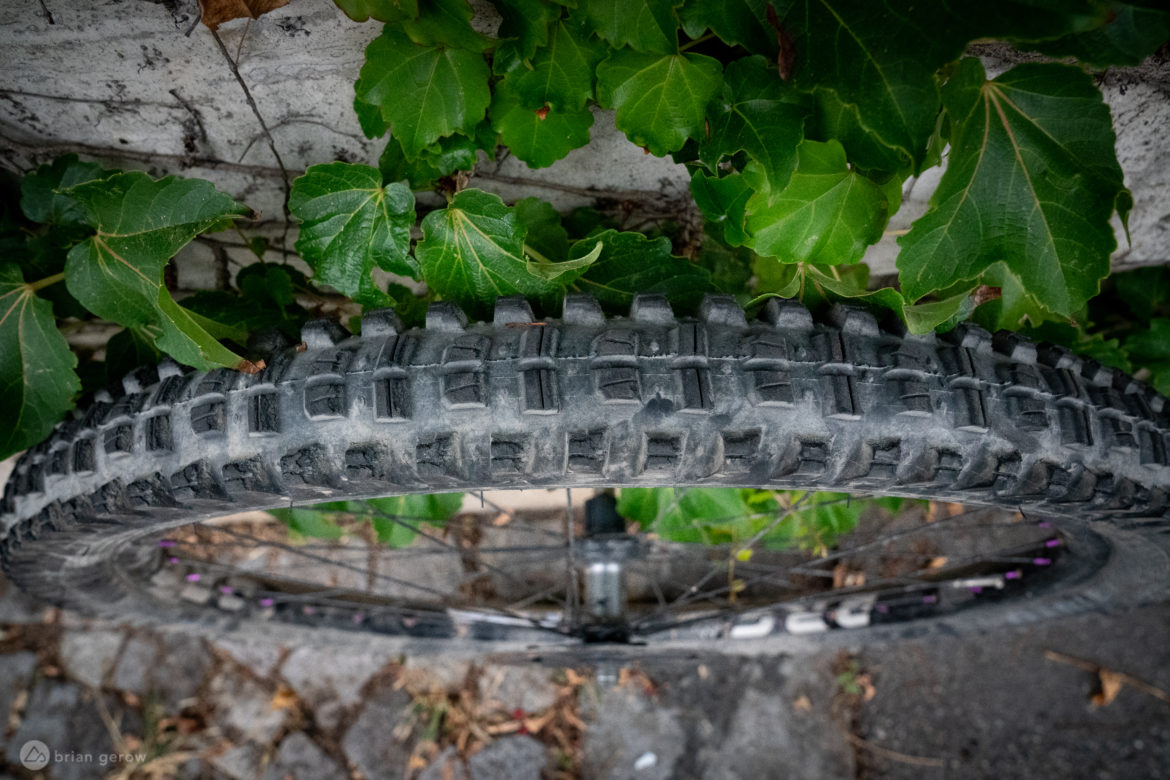 My colleague, Matt Miller, reviewed the Judge last summer, so I will focus solely on how it pairs with the Verdict. In short, these two tread patterns are made for one another. They bounded joyously across a field of sunlit grasses to embrace upon collision and weave wildflowers in one another’s rubbery hair. They’re a dialed match.

Like the verdict, the Judge’s wide-spaced tread is molded to dig into deep soils, dust, and mud in search of traction. At high speeds, when the tires are touching the ground as often as they’re not, the Judge feels like a safety net that will find grip more often than not. Its bold braking bars are exactly what riders need when hitting long steep chutes where slowing takes place at intermittent and precise intervals.

The tire transitions between its center and shoulder tread without note and breaks traction predictably when the rear-wheel-steering mechanism is engaged. With all of the amazing tires we can ride today, superlative honors are tricky to hand out, but the Judge might hold the best braking grip of the tires I have currently tested.

I poked no holes in the Judge, and the sealant inside is still looking as good as new. The tread is wearing at the rate I would expect from a tire with this much grip, which is on par with the Verdict above.

For folks who like to wallow in the dead cold mud of winter, the Judge would likely make a great front tire as well. Like running the Maxxis DHR II up front, the wide braking bars will help control the slide.

Buy It: available at JensonUSA

Vigilante as a rear tread alternative

For hardpacked riding or adventures that include a great deal fo climbing, the WTB Vigilante can be a good rear tire alternative to roll behind the Verdict. I rode with the TCS Tough/High Grip version out back on some day-long rides in the Alps and was thankful for the faster rolling tread while climbing fire roads.

That stated, I would prefer the confidence inspiring traction of the Judge on nearly any big alpine ride, provided I have the fitness to earn those faster turns. While the Vigilante is a fantastic tire for a variety of conditions, its braking and overall cornering grip were poorly matched with that of the Verdict on raucous natural descents. It was like counting on my fingers instead of using a calculator. It works, but there are better tools.

Check out Miller’s full review of the Vigilante here.

Thanks to WTB for providing these tire samples for testing and review.

Thanks for the review. For east coast singletrack (typically dry with fair mix of climbs, descents and flats) would you recommend verdict for front? Have been thinking about pairing with 2.4 trail boss in the rear (tsc light w/ slashguard).

I have yet to ride on the east coast of the US, but based on your descritpion it seems the tire could be a bit overkill. It is genuinely designed for loose natural stuff, trending toward steeper trails. If you have plenty of that, I’d say go for it. Otherwise, a pair of the WTB Vigilante tires can be a really great “all arounder” setup. They ride like a slightly burlier Schwalbe Nobby Nic.