Lately I’ve been interested in decreasing the weight of my pack for mountain biking. I want to climb better and it seems like having less weight to carry will help. The other day I weighed my pack, an older Camelbak; without water the pack weighed 3 lbs, 2 oz.

So when I got ready to go for a short ride on Wranger’s Loop out at the Kokopelli Trails I measured 1 liter of water and added it to my pack. A liter of water weighs just over 2 lbs, so on a short ride (an hour or so) I can get by with about 5 lbs of weight. On longer rides I have to add an extra liter and a few more snacks, which pushes the weight to somewhere around 8 lbs.

Here’s what was in my pack when I weighed it: 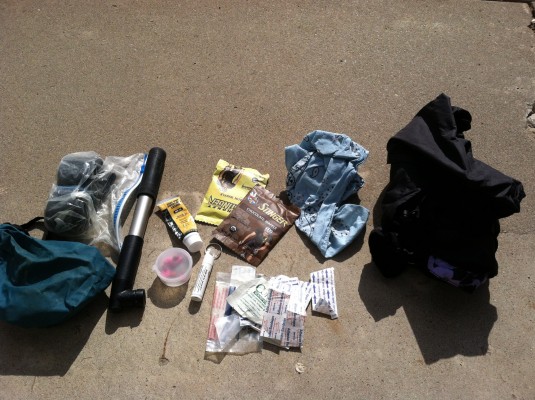 From left to right: The green bag contains my repair kit, above that is a spare tube (I run tubeless, but you never know…), then there’s a pump, container of ibuprofen and allergy medicine, sunscreen, Chapstick, 2 waffles, various bandages, a bandana, and my Sombrio windbreaker. 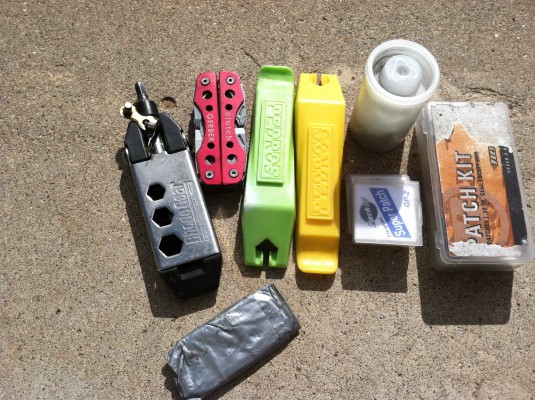 Bike tools, duct tape, patches, and an old camera film bottle with random bolts and screws. Trust me, walking my bike out from a ride is a last resort!

I feel like the majority of these items are ones I should always have with me. Even if I’m going out on a short ride on a familiar trail, I always want to be prepared. You never know when you might run into someone else who needs help, or when you might have a freak accident and need those bandages or that ibuprofen. Even on hour-long rides, I’m not really willing to take the chance of leaving much of that gear behind.

On a recent ride with my friend Andy, I weighed his pack. With about 2 liters of water in it, his Osprey pack weighed about 10 lbs. He was kind enough to empty it out (after the ride) and we found: 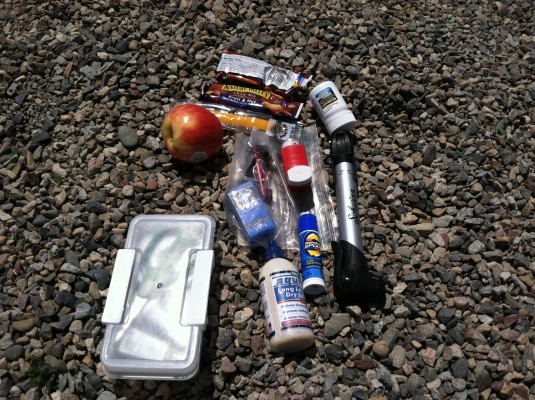 The plastic container is a first aid kit. Andy agreed he could have left the chain lube behind. Along with that he had snacks, an asthma inhaler, sunscreen, a pump, patch kit and ibuprofen. He has a small repair kit that he carries on his bike.

We both also had smartphones and keys in our packs during the ride.

What do you carry in your pack? How light are you willing to go? What items will you give up on short rides that you might carry with you on longer rides? I will say that the geometry of my current bike doesn’t allow me to have a water bottle holder on the bike itself. If it did, I’d just use a water bottle for short rides. 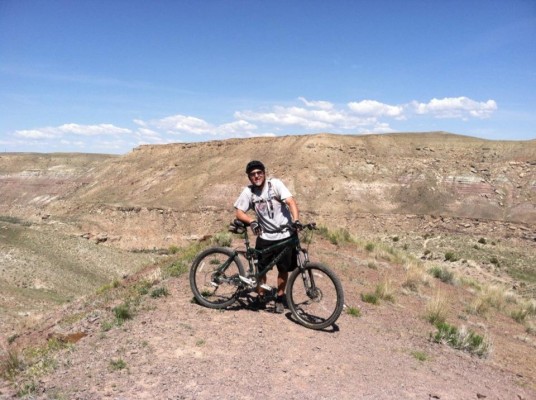 True story: last night I forgot my hydration pack at the house and ended up riding with just a bottle. It was so NICE to not have anything on my back!

Strava says I had 3 PR’s on the ride .. two of them climbing .. coincidence?

I hardly ever ride with a pack any more. It feels waaaay better without. I can fit two big bottles of both of my MTBs, which is good for 50oz of water, which is good enough for 1.5-3hrs of ride time depending on the heat. I use a saddle bag to carry a minitool, CO2, spare tube, quick-links for my chain, and a spare derailleur hanger. I keep a bit of Gorilla tape wrapped on the seatpost. I try and remember to put a minipump in my jersey pocket, but forget it about half the time. I can pretty much fix anything with that stuff. I keep my bikes well tuned and in good working order, so breakdowns and mechanicals are really rare, even moreso on my single speed, which has nothing to break to begin with. Tubeless tires almost never flat. My rides rarely get me far from civilization, if I were riding in the backcountry somewhere I’d carry more.

Yeah, carrying 5lbs. on your back can harsh the ride for sure. And ten pounds sounds like pure misery!

I rarely ride with a pack anymore (unless I’m hauling my DSLR camera which I’m doing less often thanks to the brilliant camera on the iPhone).

I have a seat bag with all my spare parts and tools and make good use of both of my bottle cages. I stuff my phone, snacks, and keys in a jersey pocket.

I never leave the house without my hydration pack. I have spare tube, pump a few tools. first aid kit, snacks and H2O. Everytime I leave my pack behind I regret it, flat tire/mechanical problems. I have a bottle cage but hardly ever use it. I would rather have the weight on my back then attached to my bike, I feel that I can throw the bike around better the less I have on it. Plus when you go over the handle bars and land on your back it’s nice to have a little cushion.

Well you guys have definitely given me a lot to think about. My new frame will be here soon and I’m going to see if I can put a bottle cage on it. I’ve noticed just measuring water and taking only what I know I’ll need has helped too.

For ‘after work’ and group rides, I carry only a co2. I bring the pump on more extended backcountry type rides.

For me it all depends on how long the ride is, what time of year it is, and how remote the area is where I’ll be riding. On a short (7-10 miles) ride near town in the middle of summer, I’ll take a patch kit & pump, 1-2 liters of water, the obligatory Zip-Loc bag with matches and TP, and no food. For a longer trip (10-30 miles) that’s way out in boonies, at pretty much any other time of the year, I include a first-aid kit; a tool kit; an emergency kit; an extra tube; a hunting knife; a camera; compact, waterproof jacket & pants; a fleece cap; extra food; a map and compass; and a water filter/pump. It’s a lot of stuff for sure, but I’ve had to use everything on the list at one time or another except the big knife–and I almost pulled that out (of its sheath) once when I got cornered by two dogs.

Yeah, for short rides (less than 1 hour), I usually take my water bottle and and a small seat pack. Longer rides will be the hydration pack. Some days if it gets really hot/humid, I’ll take the hydration pack no matter the duration because I will totally sweat out every bit of moisture in my body.

I carry a multi-tool, 1st aid kit, 1 or 2 tubes, depending on the length of the ride, and a pump. I have the bad habit of filling the bladder, even for a short ride. This makes me want to think about limiting the water, as I very rarely finish it. Definitely going to have to weigh my pack this weekend, you have me wondering how heavy it is now!

I end up with the pack for all but the shortest rides. On the frame I have a tool kit 2 pumps/CO2 with co2, and drink cage, and a seat bag with tube, allen wrenches, quick links presta adapter and co2. In my MULE, 2 tubes, 1st aid kit, space blanket, Gorilla tape, h2o purifier tabs, co2, batteries, flash light glasses case with clears knife,neosporen, whistle, phone, snacks, keys and small wallet. MULE has 100 oz bladder, but I try to only fill it enough for whats planed.

I haven’t used a hydration pack for a while now. I have switched to a custom made frame pak, it holds everything I need, CO2, first aid, two tubes, and can hold up to 100oz reservoir. It feels great not having anything on my back. It probably weighs as much as when I had it on my back, but feels lighter on climbs and longer rides with nothing on my back.

I’ve also got a second bag for climbing gear. That’s just for rides to and from, but besides,shoes and harness, ect. I got it out fitted with tubes and levers, 1st aid kit and put H2O in if I have a ways to go to a gym.

Always have mine with me. I carry a first aid kit containing: band-aids, ibprofin, a small ice pack, and liquid stitches (don’t laugh, I used them about two months ago when my calf had a run-in with my chain ring). A small allen wrench tool, tube patches, and CO2. Lost my tire tool and haven’t gotten around to picking up a new one. A FiberOne bar (just in case), a cloth rag, my keys, camera, and phone to top it all off. Oh, and the dog leash if the pup comes along!

I always ride with a pack (Camelbak Mule NV) even on short rides. Might as well be used to the weight.

I haven’t weighed it, but I’d guess it’s about 2-2.5kg all up without the water.

I usually also ride with at least 1 litre of water.

Without water, my pack weighs about 11 pounds, but I carry a bunch of crap I don’t need.
I have a bunch of tools (both for the bike and the trail).
A tube, a pump, tube patch kit, and tire patch kit.
A plethora of food including clif bars, waffles, and electrolyte chews.
Different lenses for my sunglasses.
Small first aid kit.
Small poncho and unless I’m wearing them, tights and long sleeves.

Most of my rides back home are by myself and if I have a mechanical (or worse) I want to be able to walk out without having to worry about water or layers.

I know what you mean @Jared13, but when we got my new frame last night the first thing I said was, “I want a water bottle cage.” At the same time, I’d probably still carry the smallest pack I own (my tiny runner’s pack) because where else would I put my phone and tools? I’m not biking without those items, especially if I’m by myself, even on a short ride. I’d end up spending the entire ride worrying that if I got hurt no one except the coyotes would find me!

I have not put my MULE on a scale, but it’s pretty heavy when fully loaded. I moved all repair stuff into a seat-bag, including multi-tool, small adjustable wrench, patch-kit & levers, spoke-tool, nuts/bolts, and a rag. I’m thinking of getting a slightly bigger seat-bag and transfer a few additional items.
In the pack, I carry food for me depending on ride length, 2 extra cliff bars, waffle, Extra Fizz (besides what is in the bladder), lube, pump, spare suspension parts (bearings, axles), tube, straps, 10″ folding pull-saw (logs/branches), garden snips (weeds and trim work), and a well stocked emergency kit with meds and ace-bandages.
Since I weigh more than 240 lbs I barely notice the pack once I’m on the trail. Grueling climbs are just that no matter the pack weight.
I feel I’m missing gorilla tape and TP.