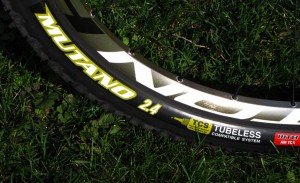 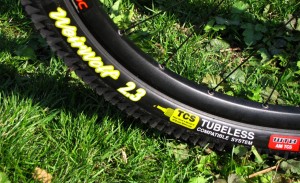 At this point in the season you’ve probably hit the trails half a dozen of times and might be realizing that your rubber isn’t as good as you remembered it. Well, if you’re an AM or technical XC rider, I have two tires for you – one you may already know and another you may not (yet). The Mutano AM TCS ($60 MSRP) comes in two sizes (2.2 and 2.4 which I am reviewing) while the Weirwolf AM TCS ($60 MSRP) has been totally redesigned for 2010. Just like the Mutano, the Weirwolf also comes in two sizes – 2.1 and 2.3. 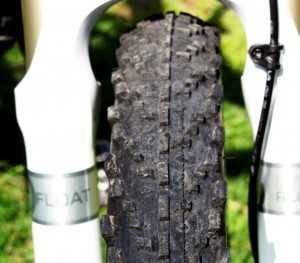 The ‘TCS’ in the Mutano 2.4 TCS stands for Tubeless Compatible System. WTB’s TCS tires feature a bead that is UST compatible along with a durable tire casing for All-Mountain use. With the Mutano you also get a good measure of security with WTB’s inner peace – a thin layer of nylon on the side walls that reduces tire flex and the chance of pinch flats. Perfect for those of us who race through the nastiest terrain!

The Mutanos also feature Dual DNA rubber, two different rubber compounds that give you the best of both worlds: a longer lasting compound in the center and a slightly softer compound on the side to improve traction and control. At about 700 grams, (bring a scale to the store and check them out as they do vary in weight) the Mutanos aren’t breaking records in terms of light weight but that’s not what these tires are about.

Taking the Mutanos on the trails was inspiring and they worked exactly as intended without any surprises (just the way I like it). These skins work equally well on everything from hardpack to loamy tread. As a larger volume tire you might think these would be sluggish and unresponsive but fortunately this isn’t the case. The Muntanos handle great in the corners when you lean into it with serious pitch. Even at the limit of traction in corners, these tires lose grip slowly rather than all at once.

Climbing with the Mutano tires on my Opus Maadh was great. I was able to stay in the saddle, spinning the tire without it wanting to let go. Getting out of the saddle and trying to do the same thing yielded less than stellar performance, with just a touch of side slip (not that much but it’s worth mentioning).

Pointing the bike down a slope and in high-speed sections of the trail the Mutanos felt very comfortable. I really like the way they grip the terrain with very little vibration thanks to the tread pattern’s center row of semi-solid strip. Stability is also derived from the slightly smaller, lower profile blocks.

In the soft stuff the Mutanos aren’t super hot. Once again these are not really designed for the mega soft stuff you find on some trails so keep that in mind if you ride in the soup. 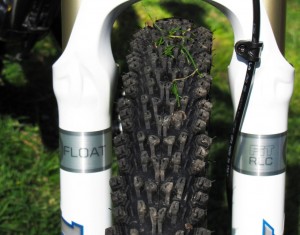 Sharing the same carcass as the Mutanos with a UST Aramid bead, Inner Peace, and the Dual DNA compound, the Weirwolf is a long lasting, pinch resistant tire. Although the Weirwolf is called a 2.3, it’s actually a bit wider at the tread than the Mutanos by 2mm. The casing is smaller but the tread depth is a bit deeper and wider. WTB says the Weirwolf is designed for loose conditions like gravel and rocks all the way down to the wet stuff. At about 800 grams these are heavier than the Mutano tires. Don’t worry though, it’s just physics: more tread = more weight.

On the trail the Weirwolf has a completely different feeling. The Weirwolf was designed by WTB’s Mark Slate, Mark Weir (hence the funky spelling), and Jason Moeschler or, as i think of them, MJ. Intended for the XC – AM crowd, this tire behaves like a NASCAR in the corner with a bit of slip before it bites.

I took me some time to adjust to riding these tires – I wasn’t kidding about the slip before grip! Clearly the best application for these tires is the softer stuff where you need bite into the dirt. These tires aren’t so great on the hard pack because they’re not as efficient as the Mutanos or even the Vulpines.

Where the Weirwolfs perform best is technical, twisty trails where you need a high degree of traction. That being said, you have to be willing to pitch the bike a bit to allow the progressive side knobs to do their best at hooking you in your trajectory. For the brave who really like to pitch, these tires let you to lean into the corners. During testing I lost traction more than once attempting to pitch corners and in each case the terrain was close to hard pack. Each time I also noticed that the tires were tracking well then all of a sudden lost it woosh… down I went. On the soft terrain it was totally different story – good traction until they lost it and progressively slipped, giving me a warning to dial things back.

In the climbs I found the Weirwolf tires offered nice traction; they felt a bit slower than some other tires but at least the climb was sure-footed. At high speed they felt comfortable without too much vibration (only a touch more than the Mutanos). Descending and braking is where the Weirwolf’s shined once again, allowing my powerful brakes to really stop the bike. I appreciated the assured feeling I got when stopping with these tires. I had more than one of those “oh crap” moments where I almost got tossed over the bars from clamping too hard on the chicken switches.

Overall these two tires from WTB, the Mutano and the Weirwolf, are good buys and will surely put a smile on your face. The Mutano works best on harder surfaces while the Weirwolf howls on softer surfaces. At the end of the ride you can’t really go wrong with either one – just make sure you select the right tire for your riding style and terrain.

A quick thanks to the folks at WTB for sending up these two tires for review.

Tires are an ongoing experiment for me due mainly to the many different terrains I ride in so Im anxious to try the Mutano’s at some point this summer. The Weirwolf’s however I hope they didn’t change all that much. There was one on the front of the K2 I bought over 3 years ago and has been there until just last week when I switched to a more pavement friendly tread (semi-retiring the K2 to a lighter duty). It’s not the best performer but certainly not in the bad category either. But with around 4000 miles on it the dam thing still has major wear left on it. It now hangs with the rest of my arsenal awaiting its next assignment to which Im sure its up for.

Nope these Weirwolf’s are a redesign of the older version. The side transition knobs are totally different as well as they are stepped to add to the feel of the tire. This tire feels much different to the old version. Now the Mutano’s are pretty new and outta the box a good tire. I was at Kelso over the weekend and spent a good 4 hours on the trails. Mostly hardpack. I gotta say I love that tire for that terrain. Works great in conjunction with a bike that has 5inches of travel.

nice review.
I’ve been looking at getting some new treads as it seems I’m always in sand/ gravel. the weirwolfs might be the ticket!

+1 on the Mutano’s for dry hardpack.

The smooth ride makes you forget you are on a 2.4 sized tire. Personally I wish they had a little more bite on the side knobs but it’s a minor complaint. The only real place I have noticed a weakness is on damp roots and exposed rock. Then again, most tires for hardpack are going to have difficulty in that terrain.

WTB is Stepping up with Stryker | Mountain Bike Blog || SINGLETRACKS.COM

[…] a well-tested new wheel system for the XC -Trail rider. Perhaps you might recall the TSC tires that we reviewed a month or so back (Mutano and Weirwolf). Well, to complete the system, WTB now offers a wheel set […]