When I first saw the press release from Scott about their new Spark and Scale lines, my eyes immediately went to the big, bold headlines proclaiming these the lightest FS and hardtail mountain bike frames in the world. As I skimmed through the 80+ pages of data, my eyes began to glaze over, and I focused in on the uber-light world cup XC bikes.

The new world cup-level bikes truly are fantastic. Not only do we have the respective weights of 1,749g and 849g, but Scott has just released complete weight and pricing info.

The top-tier Scott Spark RC 900 SL comes with 100mm of full suspension front and rear and weighs just a scant 21.61lbs! For that light of weight and the latest MTB tech (like SRAM Eagle XX1), the $10,000 price tag seems quite reasonable.

As I prepared to travel to Crested Butte to test the newest bikes from Scott, I was a little worried: would we be riding world-cup-level XC race bikes? Am I competent to review such a bike? Does anyone aside from the upper 1% of endurance freaks even want to buy such a bike?

The Differences Between the Spark RC, the Standard Spark, and the Spark Plus

But what I didn’t fully comprehend as my eyes glazed over while sifting through the endless pages of data is how deep the new line of Scott bikes truly is. It turns out that the Spark RC (RC stands for “racing concept”) comes with 100mm of travel, but the standard “Spark” actually has 120mm of travel front and back. The Spark Plus (tested) has 130 up front and 120 in the rear.

Where the Spark RC has a 68.5-degree head tube angle, the Spark 900 Ultimate has a 67.2-degree HT angle, and the Plus has a 66.9-degree HT angle. There are several other differences as well, including the RC only being compatible with 1x, and the rest of the Sparks being 2x compatible.

In essence, the Spark RC is the no-holds-barred world cup-winning race bike, a la Nino Schurter. The standard Spark, on the other hand, is the everyman trail bike.

Due to my affinity for plus-sized wheels, I spent most of my time aboard the Spark Plus (the 700 tuned model). Here’s what I found.

At $8,000 MSRP, the top-tier Spark Plus is hardly an “everyman trail bike,” but unlike the RC, the Plus is available in a variety of builds, all the way down to just $2,700–a very respectable price point for entry into the high quality full suspension plus bike market.

My $8,000 test rig, on the other hand, weighed just 25.57lbs despite the 130/120mm of suspension travel and the oversized plus wheels and tires. The HMX carbon frame helps to keep the weight down. While not quite the highest-level carbon frame in Scott’s line, it’s still the second-tier carbon out of at least three different tiers. 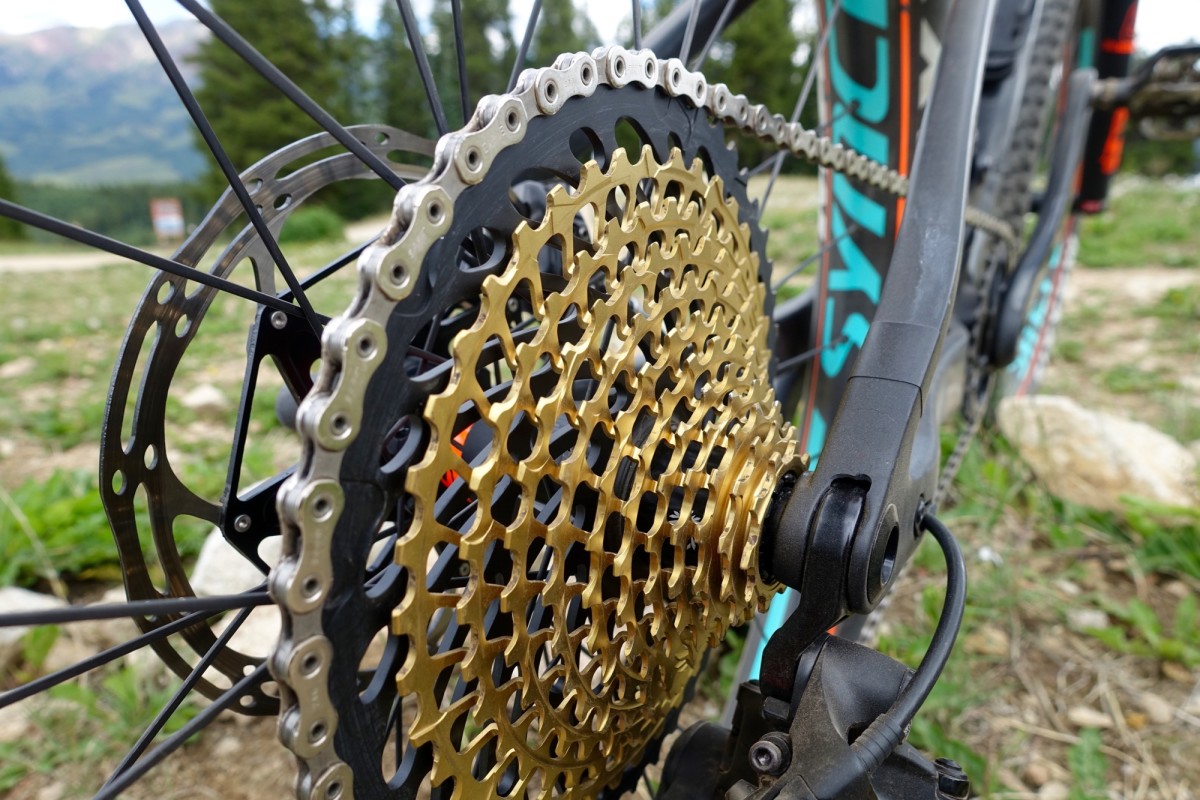 To test the Spark Plus’s trail worthiness, I began by shredding downhill laps at Crested Butte Mountain Resort. While maybe not the classic test of a 120mm bike’s trail worthiness, I was able to quickly reach the Spark’s limits–or rather, my limits aboard the bike. Despite running through all of the travel multiple times in rock gardens, cased jumps, and the like, the Spark just kept plowing down the mountain with nary a hiccup in its stride.

The plus-sized wheels and tires contributed significantly to keeping the bike on line and rolling in rough terrain. In many places where a narrower tire–even a 29er tire–would have fouled up or required laser precision to negotiate the obstacles, the plus-size tires provided plenty of forgiveness and allowed a care-free and loose riding style that most bikes of this travel length don’t provide.

However, at 25 and a half pounds, “how does it climb?” is an extremely relevant question. I set out to answer this on day two, with long climbs in the backcountry on a 23-mile ride.

The answer? Superbly! Scott’s proven TwinLoc lever made selecting full lock out, trail mode, or full open a cinch on the fly, and the light weight of the bike made it positively scamper up the climbs. While I thought the rolling weight of the plus wheels might be inhibitive, I didn’t find that to be the case. In fact, those wheels even opened up innovative line choices while climbing, such as crossing washed out gullies in a way that’s simply not physically possible on a standard-wheeled bike.

While I had indeed tested the descending of the Spark at the ski resort, pinning down Trail 403, which was wet and slick from the drizzle that morning, was an altogether different experience! This was much more my preferred type of riding: long, steep, technical, sketchy, big mountain descending.

Despite being 30mm shorter travel both front and back than my personal rig at home, the Spark was still more than capable of tackling extended rock gardens, wet root webs, drops and jumps, steep fall line sections–and really, absolutely everything I threw at it. In short, the Spark is a trail bike of formidable strength both up and down the mountain

On day one, I had an issue with the stock dropper post not going down into the frame far enough to let me ride it at full mast, but according to Scott I experienced this issue because bikes are pre-production, and the design of the post is off. They claim that Fox is working on fixing the issue with the post.

For my ride on day two, Scott swapped a different model of dropper post onto the bike for me, which resolved the issue completely. They also assured me that production models won’t experience this issue. So if anything, this point of negativity can be taken as a warning that you might not be able to install any after market dropper post that you’d like, due to the interrupted seat tube.

Finally, I also slashed the rear Maxxis Rekon+ tire in the middle of the tire tread–so much so that the tubeless sealant wasn’t able to seal it. This was actually the first Maxxis tire of any kind that I’ve slashed open on a rock, and the first tire of any brand that I’ve cut in the middle of the tire tread. While this isn’t an issue with Scott’s frame or design at all, it is worth noting that even on some of the burlier plus-size tire models, that sacrifices are still made to try to keep overall tire and rotational weight down. If anything, take this as a caution that plus-size tires still aren’t offering the same durability found in standard-size tires, unless you’re willing to take a massive weight penalty.

Personally, I’m a big fan of the latest breed of 150+mm long travel trail bikes. They’re fun to ride, and are so extremely capable that they can tackle absolutely anything in your path! But if I’m honest with myself, very rarely do I push my 160mm FS bike to its absolute limits.

Not only that, but companies like Scott are making shorter-travel trail bikes more aggressive and capable than ever before. This comes from the long, low, slack geometry, but also continued advances in parts spec (suspension, wheels, and tires), and improved frame tolerances and suspension linkage designs.

At the end of the day, the Scott Spark Plus is more than enough bike for me to ride the burliest of backcountry trails on, yet it’s so much lighter and efficient than my longer-travel enduro bike that at the top of the climbs, it leaves me feeling more refreshed and more prepared than ever to tackle those gnarly descents.

I encourage you to cut back on the amount of suspension travel you’re using by trying out a modern short-travel trail bike. You might just find that you really like it.

Gear
The We Are One Arrival Is a Mid-Travel Bike With...
Gear
An Inverted Dropper from Enve, Revel DJ Bike, and Improved...
Trails
An Intro to Bikerafting: How it Works, and How to...
Gear
The Donnelly AVL Tire is Stoked to Climb Technical Trails...
Subscribe
Login
Please login to comment
1 Comment
Most Voted
Newest Oldest
Inline Feedbacks
View all comments

When Plusbikes first came out they almost all came with 3.0in tires weighing more than 1000gms mounted to i45mm (i=internal width) rims which I will call Plus-Heavy. If you rode one of these Plusbikes you might appreciate the increased traction, flotation, and tire-suspension but you also would have noticed how heavy these wheels were. For this reason, Plusbikes have reputation for being sluggish, stodgy, and slow.

However, right from their first Plusbike, Scott took a different approach. Their Plusbikes came with 2.8 tires weighing less than 900gms mounted to i30-35 rims which I will call Plus-Light. Making the shift to Plus-Light reduces tire/rim weight by 200-400gms. Using carbon fiber rims and the very light Maxxis Rekon tire reduces weight even more. Scott pioneered the Plus-Light wheel.

Anyhow, if you haven’t ridden a Plus-Light Plusbike, you should try one. You can get all that traction, flotation, and tire-suspension without all the weight. I’ve now come to believe that an i32 rim mounted to a 2.8 tire makes the perfect trailbike wheel.