The big story at the 2015 Sea Otter Classic is the widespread introduction of the 27.5+ wheelsize. For those unfamiliar, this is a mid-fat wheelsize featuring approximately 3-inch tires. Stay tuned for a more detailed analysis of this progression in the plus size trend once the show has finished.

The Trek Stache reviewed here is 27.5+ compatible, but the bike I tested was running 29+ wheels/tires. 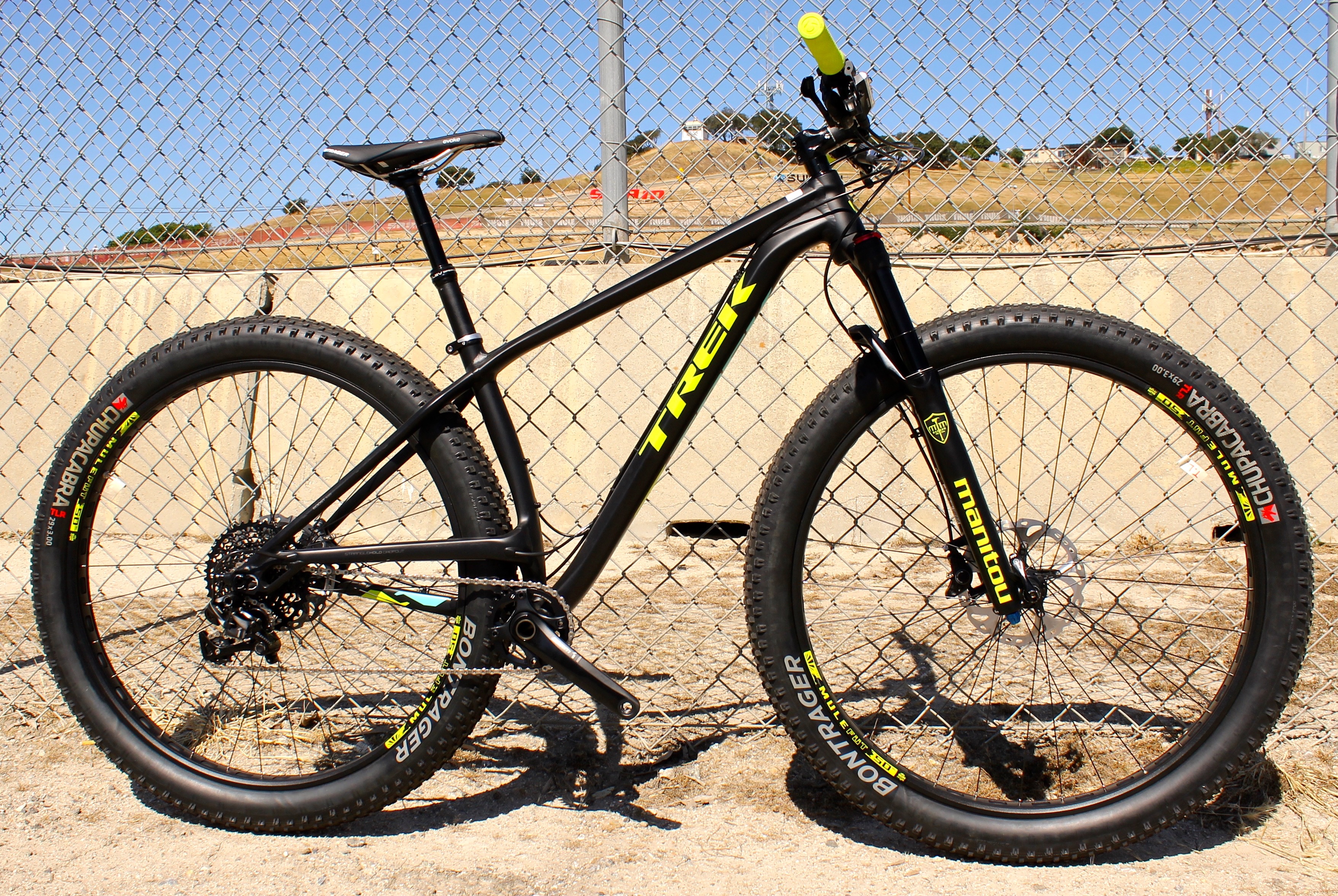 The aluminum-framed Trek Stache is designed to work with 27.5+, 29″ and 29+ tires, thanks to the Trek Stranglehold dropouts. The stock option is 29+.

In order to adequately accommodate the 29+ or 27.5+ wheels the Stache features SRAM’s all-new Boost 148/110 rear/front hub spacing and related components. This provides stiffer wheels, improved chain/tire clearance, and shorter chainstays. In fact, these are the shortest chainstays that Trek has ever engineered–405 to 420mm (presumably depending on where you have the dropouts set). 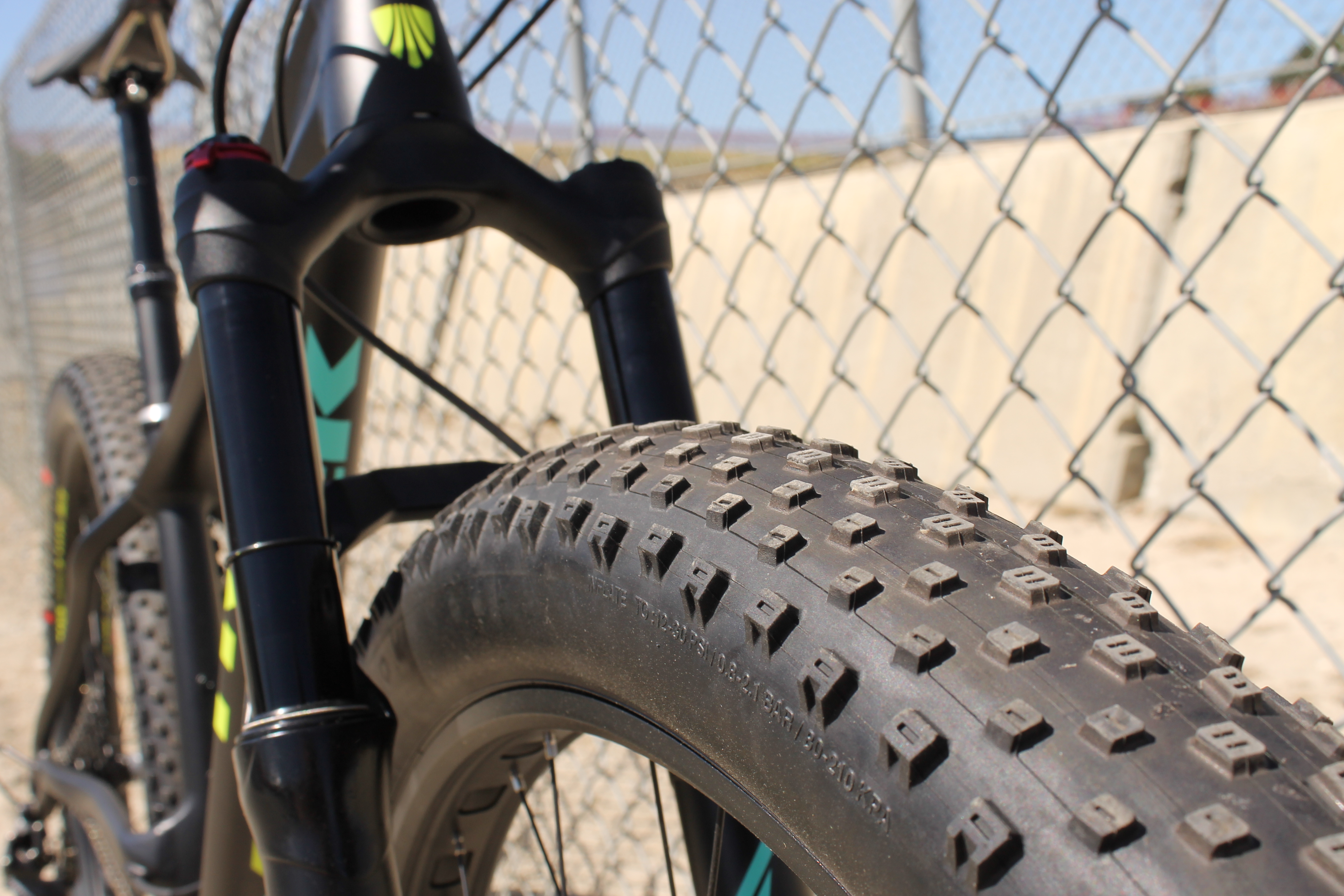 The Stache 9 is in the trail hardtail category of bikes, with a 67.5-degree headtube angle, the super-short chainstays mentioned above, and 110mm of fork travel.

Perhaps one of the most interesting things about the frame design is how exactly Trek got that chainstay length so short. In order to shorten the chainstay as much as possibly they created an elevated chainstay on the drive side in order to route above the crankset, around the wheels, and over the derailleur. As you can see from the photo, there’s significant chainring/tire overlap, which just wouldn’t have been possible with a standard chainstay: 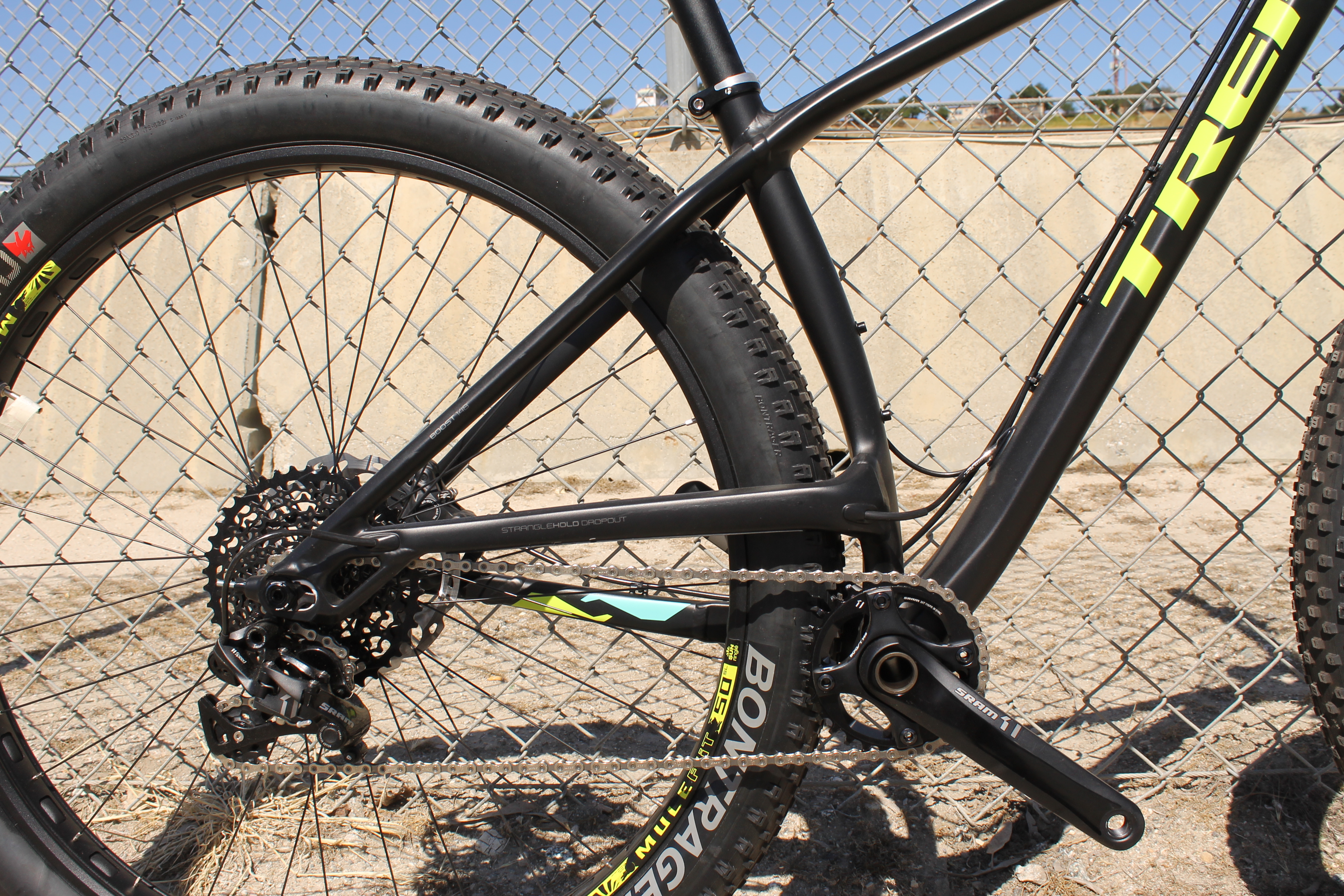 I got this rig out for a real-world test at the Sea Otter Classic, and the assertion by Trek that this is a “trail hardtail” is spot on! Despite the plus-sized 29″ tires this may be the easiest-to-wheelie bike that I’ve ever ridden, thanks to the uber-short chainstays. Seriously, just smack the pedals and wrench the bars and that front end flies off the ground!

Also, I found the actual on trail handling to reflect this as well. Thanks to the slack head tube angle the descending was confident and stable, and the cornering was aggressive thanks in part to the addition of a dropper post.

As you could expect, the traction through sand, on the climbs, and in the corners was excellent thanks to the plus-sized tires. Aside from the Surly Instigator I think this may be the most aggressive non-standard mountain bike that I’ve ridden, and coupling the incredible plus-tire traction with aggressive geometry is a match made in heaven! My only question is: why doesn’t this rig have rear suspension?!

The “trail” category is also climbing-conscious, and the epic traction of the plus-sized tires shines again. When it came to stupid-steep, borderline unsustainable loose-over-hardpack climbs at Fort Ord, the only hiccup in the system was my fitness and not rear tire traction.

While I want to totally love and embrace this bike, I just can’t. There was one big hangup that I experienced: my quads and calves both banged on the seatstays constantly. Any time I started to descend or corner aggressively I’d bang the stays on my calves and inner thighs, depending on the position and part of the pedal stroke I was in. Even when seated, my thigh just above the knee would sometimes impact the stays when digging deep in my pedal stroke. 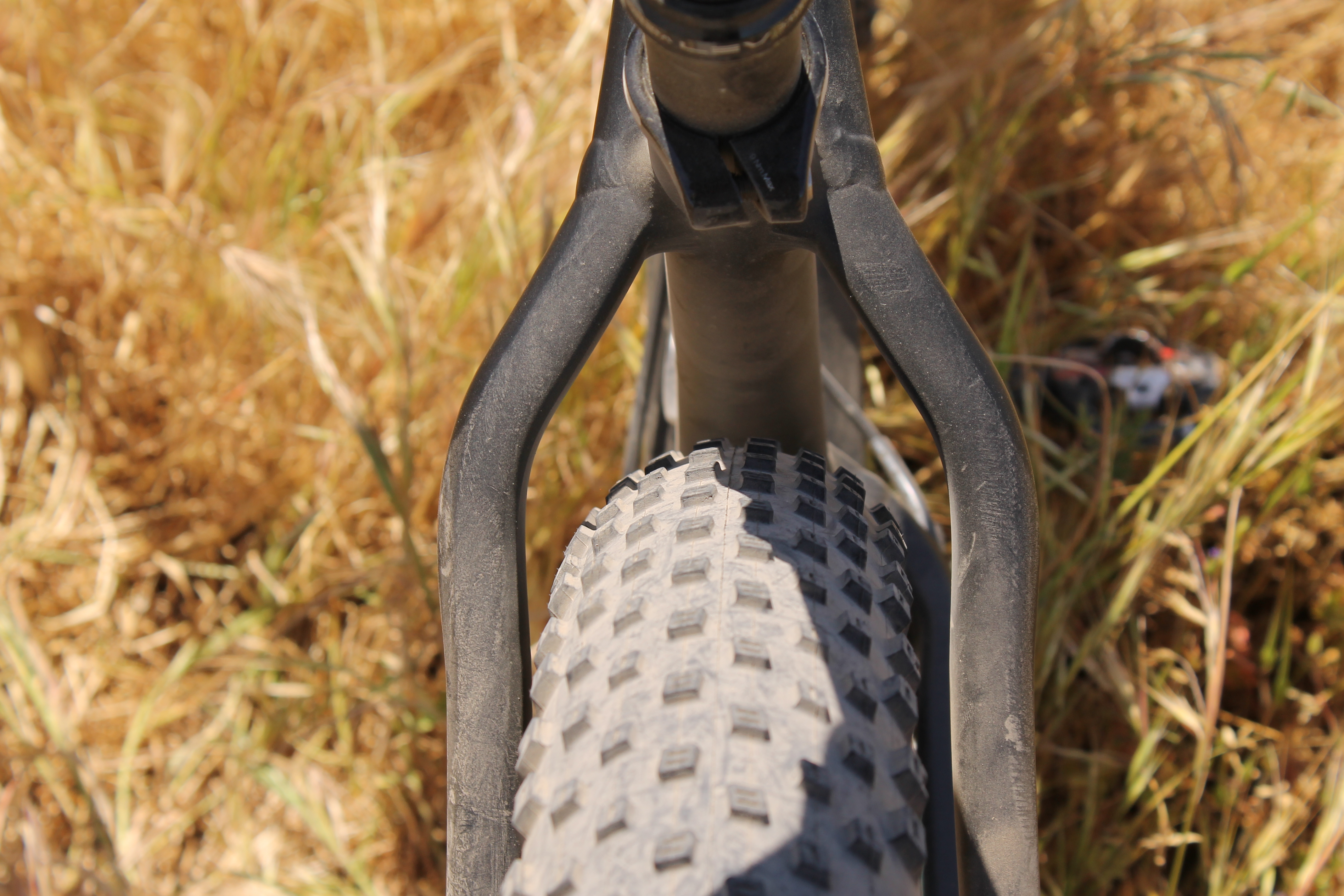 While I realize that the stays do have plenty of room built in to accommodate a variety of tire sizes, as I said, I’ve ridden two 29+ rigs (Surly Krampus and Niner ROS 9 Plus) that don’t have this issue. To say that this is a result of the plus sized tires is an absolute cop out. Granted this came from a tech at the show and not a brand rep, but regardless of what the justification is I won’t accept that a bike frame has to hit my body when I ride. I think this issue partly arrises from the slightly-flattened tube design. While it looks great, if it causes such issues, looks just don’t matter. 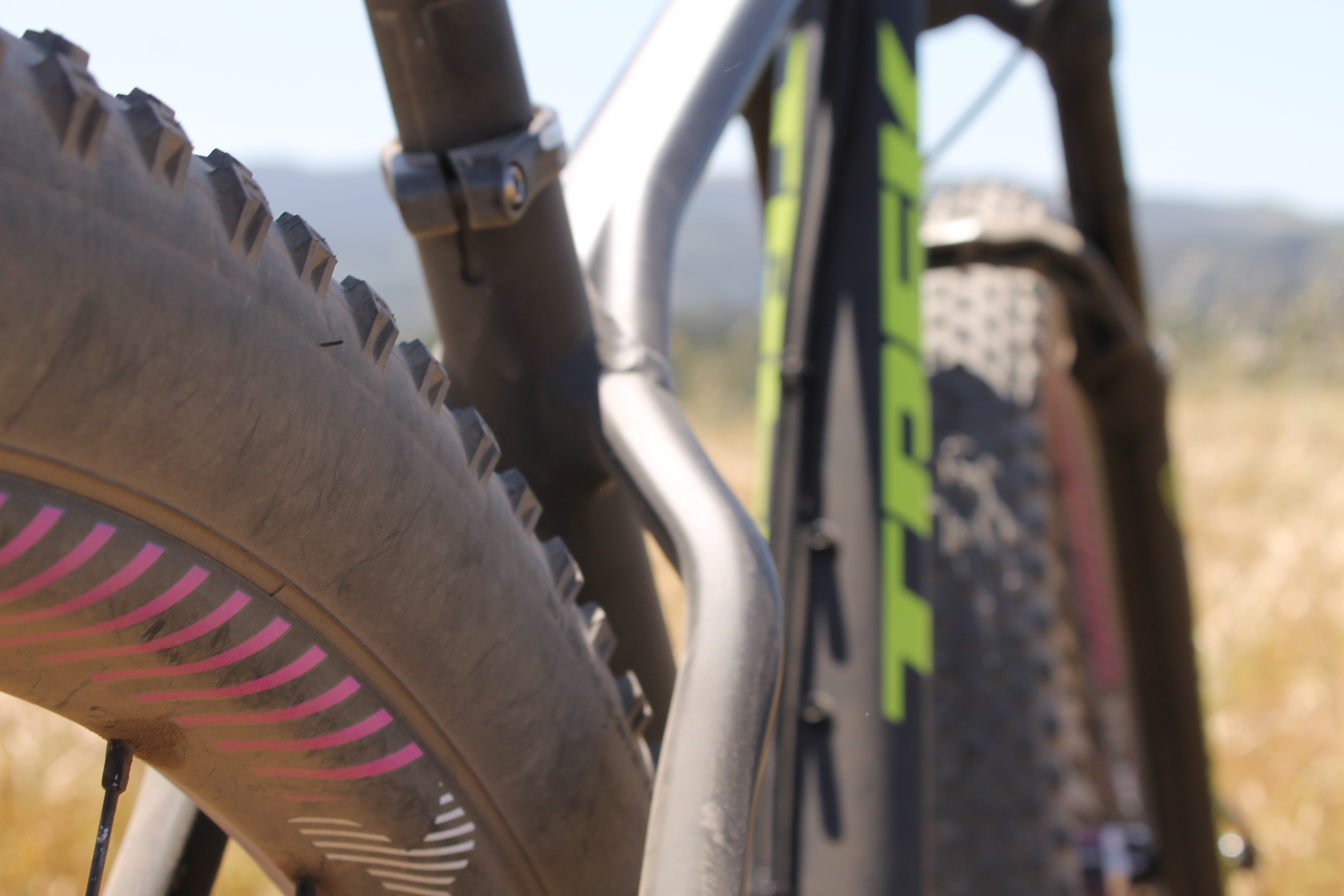 As both Corey and I mentioned with the Yampa, perhaps if you’re a tall guy riding a size-large frame and you have the wispy build of a cross country racer, this won’t be an issue. But this isn’t a bike designed for a cross country racer. If you’re a shorter guy with a stocky, muscular build like me (I’m 5’7″), unfortunately you can probably expect to run into these issues.

Honestly, not having the frame design figured out in medium and small frames (I rode a 17.5″ frame) is mind-blowing. If Trek didn’t know that this was an issue, I’d be shocked. If they did know it was an issue and they produced the frame anyway, I’d also be shocked. So I guess either way, I’m shocked to run into this issue from a company that generally produces such solid, dependable bikes.

While overall I think the trail handling is spectacular and the plus-sized tires perform superbly, having my legs hit on the seatstays is an absolute deal breaker for me, especially when there are so many other bikes on the market. If you’re tall and lanky, you may not have that issue. But if you’re short, buyer beware! Be sure to test ride before you buy.

Note: this review was originally written assuming that the bike was spec’ed with 27.5+ wheels. While you can mount 27.5+ wheels on this bike, the stock spec–and the spec I tested–features 29+ wheels. This was my mistake. I’ve modified the review accordingly, and updated it at 8:39pm MDT.

Gear
Never Underestimate the Power of a Good Zip-tie
Gear
These MTB Deals are Fire, including 40% off Patagonia Dirt...
Gear
Mountain Bike Tire Repair Tips: From Emergency to Semi-Permanent
Gear
The Maxxis Minion DHF Tire is Still the One to...
Subscribe
Login
Please login to comment
14 Comments
Most Voted
Newest Oldest
Inline Feedbacks
View all comments

I ride a Stache 8 and was just discussing how wide a tire I could put on my rims with the LBS owner. Love the look of this bike. I suppose the chainstay problem would be found with the 29+ also. Did you hit on both legs or just the elevated side?

Update: turns out that I actually rode a 29+ despite requesting a 27.5+. Once I get back on a computer I’ll update the review accordingly. However, all of my comments about seatstay issues still stand as the same frame is used for both 27.5+ and 29+.

Apologies on the error folks.

My LBS loaned me one of these for my visiting guest, so of course I had to try it out too. Those seatstays would hit me on the inside, back of the knees…VERY uncomfortable. It absolutely is a total deal killer. I had the same thoughts about the aesthetics on the bend that cause it to flare out even more. When I returned the bike, I walked around looking at that area on the fat bikes. There were several solutions in frame designs that made this a non-issue for them.

Thanks for chiming in, Ryan!

Yes it is!! Just finished talking to manitou. They have different forks for 29+ and 27.5+ available in a wide range of travel lengths

I’d like to see a follow up if Trek responds in some way. One of the most damning reviews I think I’ve read. Thanks for not pulling punches.

Demo’d the Stache 9 a few months ago on local trails including short, but steep up and downs, log rollovers xc singletrack trails.
Pros: Great on descents and over roots and rocks.

Verdict: May be great for loose and rooty rocky conditions and descents, but not as an overall performer in a xc environment. In fact, the Stache dumbs down the feel associated with riding technical terrain.

Never had an issue with the seat stays though. I am 6’3″ and tested a Large since they didn’t have a XL which I would normally choose

I just got a Stache 9 recently and absolutely love the bike. I could not believe how heavy the wheels are after riding the bike and thinking to myself how well they accelerate (not XC-fast, but really not slower by a landslide). With a set of the new 40mm carbon R-line wheels this thing would be even more monstrous.

The only down-side for me is that I have to run extremely high rear tire pressure to protect the rim or pinching the tire. I tried 12 psi and it just does not work. At around 15 to 16 psi I feel that the rim and tire is safely protected without losing too much traction on steep climbs or getting bumped around too much on rocky descents.

This bike is a game-changer. I love my XC HT, but I find I just hit everything so much harder with the Stache. The only big let down for me was the stock 18t star ratchets in the 350 rear hub. At least it can be easily rectified.

‘…e only big let down for me…’ I meant oversight. For an otherwise well-equipped bike, they could have spec’d the 36t or 54t star ratchets.