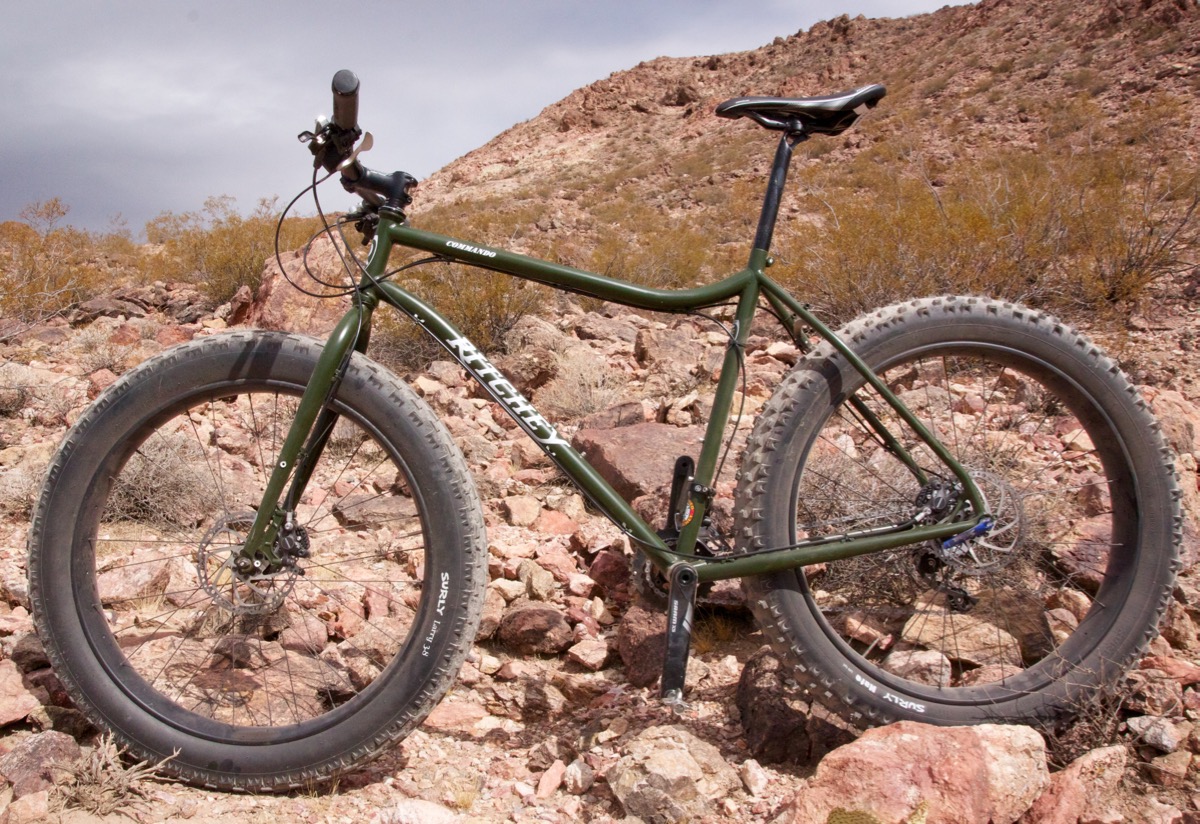 Last year Ritchey announced the Commando fat bike, and frames started shipping early this year (or late in the fat bike season, depending on how you look at it). Tom Ritchey is a living legend, and anything he lends his name to (especially a bike frame) is going to be a solid build that’s classically designed. That’s why I was so stoked to get to test ride the Commando fat bike at Interbike this week.

The Commando is a steel frame, 4″ (tire width), rigid fat bike that’s sold as a frame+fork only. It’s built up from triple-butted Ritchey Logic II tubing with a 69.5-degree head tube angle, and is curiously listed as being “compatible with hydraulic disc brake systems only.” The included fork is a cromoly steel fork with a straight steerer and 45mm rake. Aside from the hydraulic brake requirement, this bike is built using tried-and-true methods. and geometry that Tom and company have honed over four decades of building bike frames. 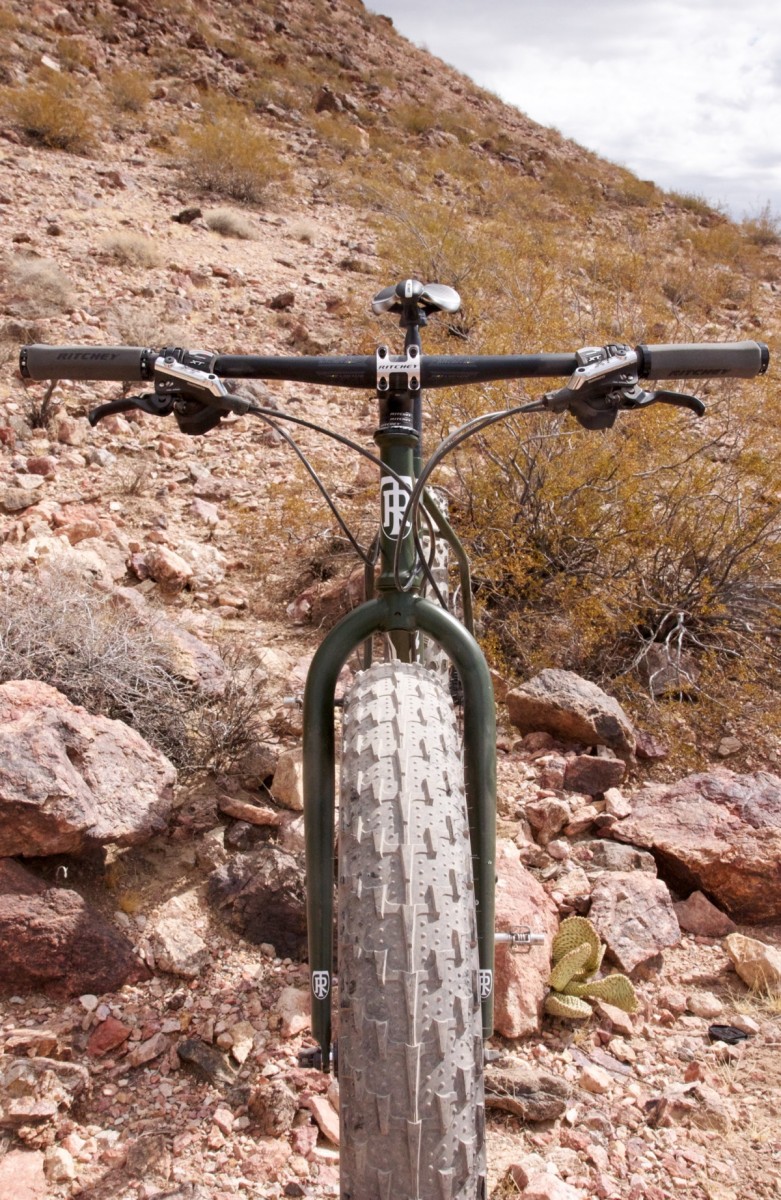 Remember, the Commando is offered as a frame+fork only, so the build kit is up to the buyer. However, the bike I borrowed from Ritchey was built up with Shimano XT brakes, a SRAM X5 2×10 drivetrain, and of course, Ritchey Trail bars, Ritchey stem, Ritchey WCS saddle, and even Ritchey grips (which are excellent, by the way).  The tires on the rig I tested were Surlys: a Larry 3.8 in the front and a Nate 3.8 in the rear. This is not a lightweight build by any means, but the upshot is the frame is a blank slate for the rider to customize to their needs.

I took the Ritchey Commando out on a pretty standard mission: climbing (then descending) the loose, sometimes rocky, desert singletrack of Bootleg Canyon. I was set up with an XL frame which actually felt a bit too big for me (I’m 6’3″), causing me to stretch just a bit more than usual to reach the handlebars. The upshot is this bike should be just right for even taller riders, who generally have few options in the fat bike market.

The Commando felt heavy on the climb up (probably because it was) and tended to corner a bit awkwardly through tight turns, though generally no more so than other fat bikes I’ve tested. As the trail turned downhill at the top of the climb, I paused to let a couple of very capable-looking riders on full suspension bikes go ahead since a) I was on a rigid fat bike and b) I’m a much better climber than descender.

But here’s the shocking thing: I passed both of those guys pretty soon after on the descent! The farther I descended, the more comfortable I felt as I started lofting the Commando into the air, taking the high lines on banked corners, and basically rolling over everything with reckless abandon. I finally had to slow things down where the trail got bumped out toward the bottom (a suspension fork would have been killer here) but still, I was shocked to find this bike was so much better at descending than climbing. 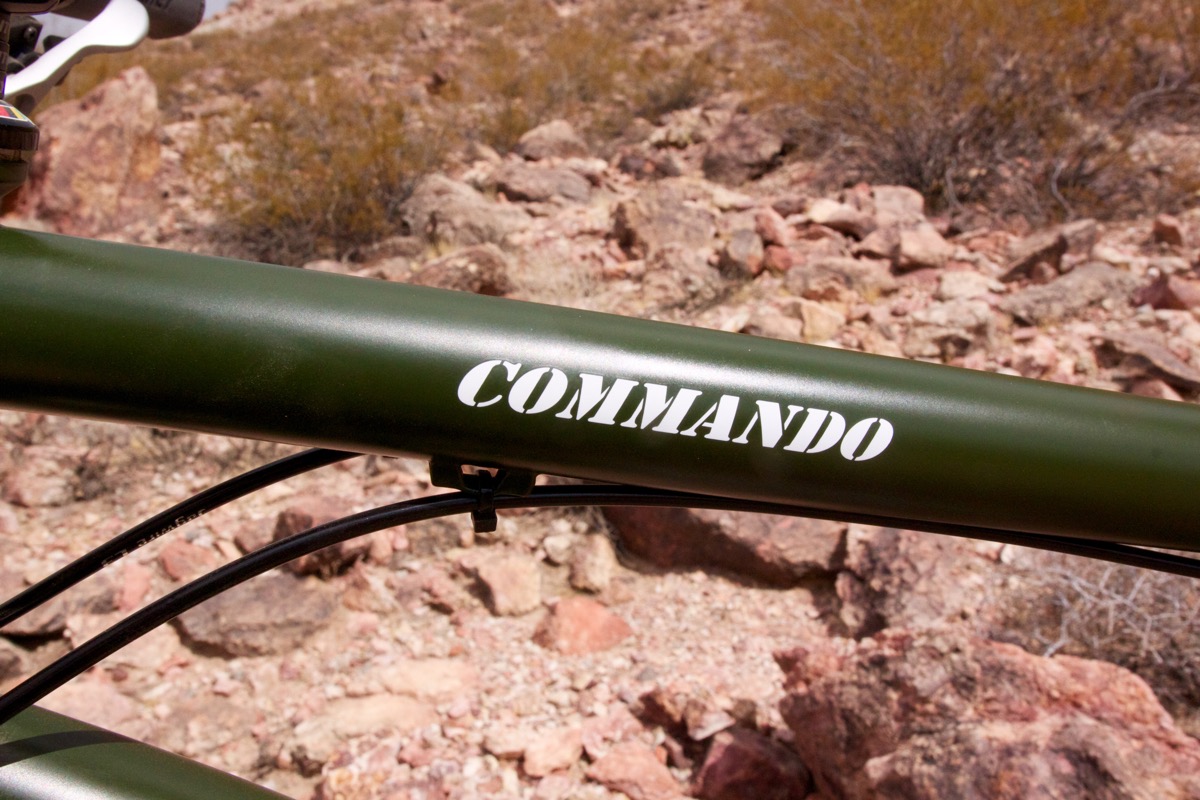 I came away from my test ride a bit unsure about what the ideal use case would be for the Ritchey Commando. As a snow bike, it’s a bit limited since the frame and fork are only designed for 4-inch tires instead of the 5-inch tractor wheels most winter bikes are sporting today. The lack of available braze ons–though to be fair the Commando features more than a standard mountain bike–meaning this bike isn’t really geared toward off-road touring either. Perhaps the best way to describe the positioning of the Ritchey Commano is that it’s built for those who don’t have anywhere in particular to go, but just enjoy getting out for the ride.

The Ritchey Commando frame+fork is available for $999.95, and in an era of constantly evolving bike tech, it’s easily the most timeless fat bike design I’ve experienced. Going Commando isn’t for everyone–but for those who do, it’s one heck of a ride.