Tuesday afternoon at Outdoor Demo brought a brief rain shower, which was great for those of us testing bikes. Not only did it cool things off and tamp down the dust, it also meant a bunch of people cut their rides short. The Intense booth had been devoid of bikes until this point. When I saw that their racks were full, I headed over to see what was what.

I had my pick of the litter and decided to mix things up. All the other bikes I rode at the show were long-travel 27.5s, but the Carbine 29C was beckoning to me. It’s got 29 inch wheels, 160mm of travel up front, and rear travel is adjustable between 125-140mm. The Carbine 29 is offered in four complete builds, with all of them sharing the same full-carbon frame (front and rear triangles). At the lower level is the Foundation build followed by the Expert, Pro (tested), and topping out with the Factory level.

The  $6,700 Pro build gets you a mostly SRAM and RockShox spec: a Pike RCT3 fork and Monarch Plus shock, a mixed X1 and X01 drivetrain, Guide RS brakes, and DT Swiss E1700 wheels. For the contact points, Intense went with a Renthal Fatbar bolted to a Thomson stem, a KS LEV Integra dropper, and a Fabric Scoop Radius saddle. Where the rubber meets the trail you’ll find the solid-performing Maxxis High Roller II tubeless ready tires.

From the first few pedal strokes I was smitten with this bike. It snaps to attention, and like all the best 29ers, it carries speed like a mofo. One thing I noticed about the Carbon was how quiet it is. Like, weirdly quiet. With clutch derailleurs and one-by drivetrains, bikes make much less racket than they used to, but man, the Carbine made no noise–apart from my tires in the dirt, of course. The DT Swiss hubs were quiet, so even coasting it was noticeably silent.

While the Carbine may have 160mm of travel up front, it doesn’t feel long, awkward, or slow. In the tight and exposed sections of the Skyline and Boy Scout trails, the Intense was easy to maneuver. It didn’t feel tall or tippy despite having bigger wheels than the other bikes I rode. 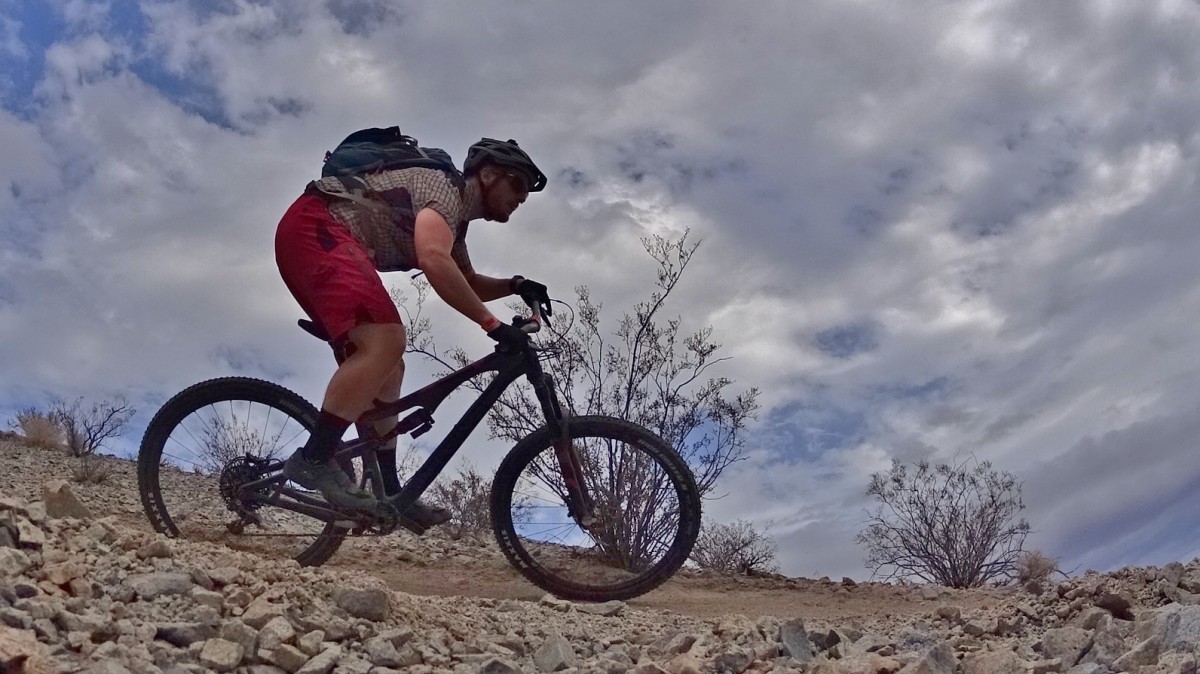 The Girl Scout trail is more open and flowy, but still punctuated with jagged rocks and tight moves. It’s a good place to get some more sustained speed, which the Intense loved. I was digging it too, until I launched off a little roller and landed on a particularly pointy rock and flatted the front tire. The Stan’s sealant kept me from losing all pressure, but I had to coast on the road back to the Intense tent. I was just getting into my groove on the bike and didn’t want to just drop it off, so the folks at Intense poured some more Stan’s in, pumped up the tire, and sent me back out.

For my final loop I rode the West Leg -> Mother -> IMBA -> P.O.W loop. P.O.W. is all about speed, and I was having a ball! That all came to a quick end when I washed out in the kitty litter-like soil and got ejected over the bars. I slammed on my left side pretty good and lightly shredded my forearm as I slid down the trail (don’t worry, the bike was just fine). Even after that bike-body separation, I still wanted to keep riding the Carbine. That’s how much damn fun that bike was.

Riding the Intense Carbine reminded me of all the reasons I like riding 29ers. They haul ass, you can monster truck over just about anything, and if designed correctly, can still be a blast to ride in tight trails. When it’s time to retire my current trail bike, I’ll be giving the Carbine 29C a long, hard look.