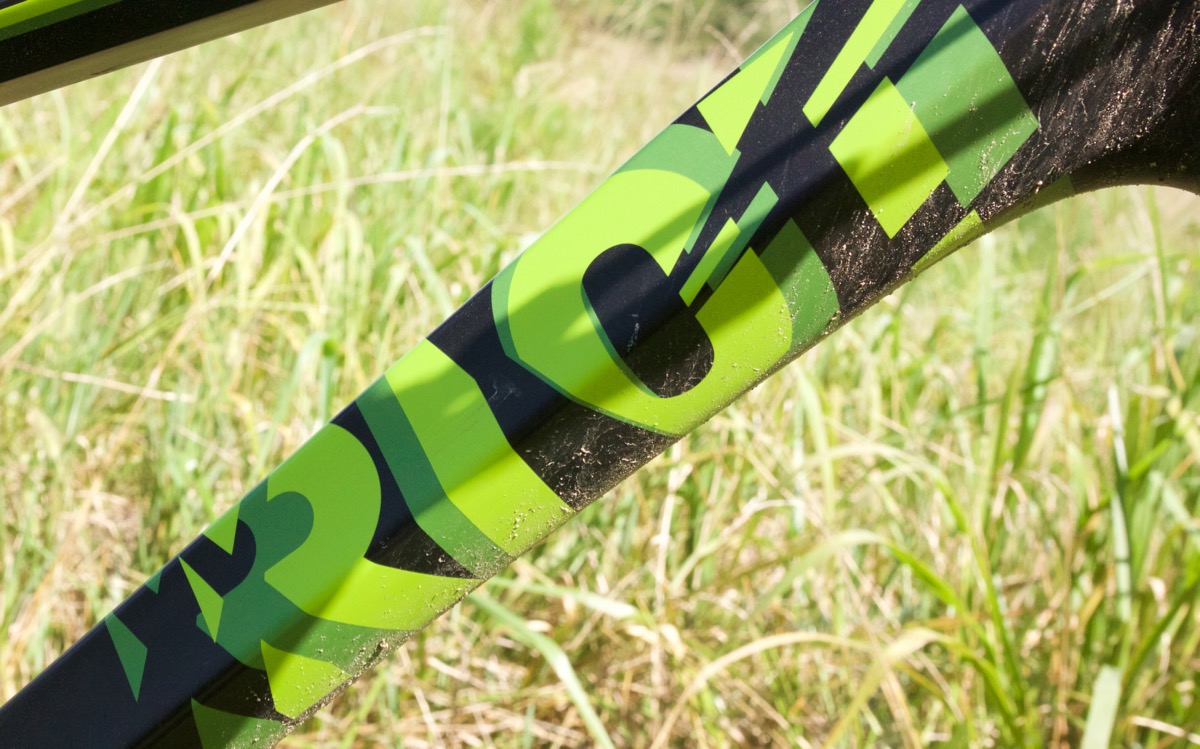 Updated 9/2/2015: The wrong version of the Riot was referenced originally. This article has been updated to reflect the correct bike model and specs from the REI website.

REI recently brought the GHOST brand to the US and has quickly rolled out the bikes to their nearly 150 retail stores. The company has been marketing these bikes pretty aggressively and after seeing one show up to our weekly group ride a few weeks ago, I knew I had to test a GHOST bike for myself. At a recent trailhead demo event I finally got my chance. 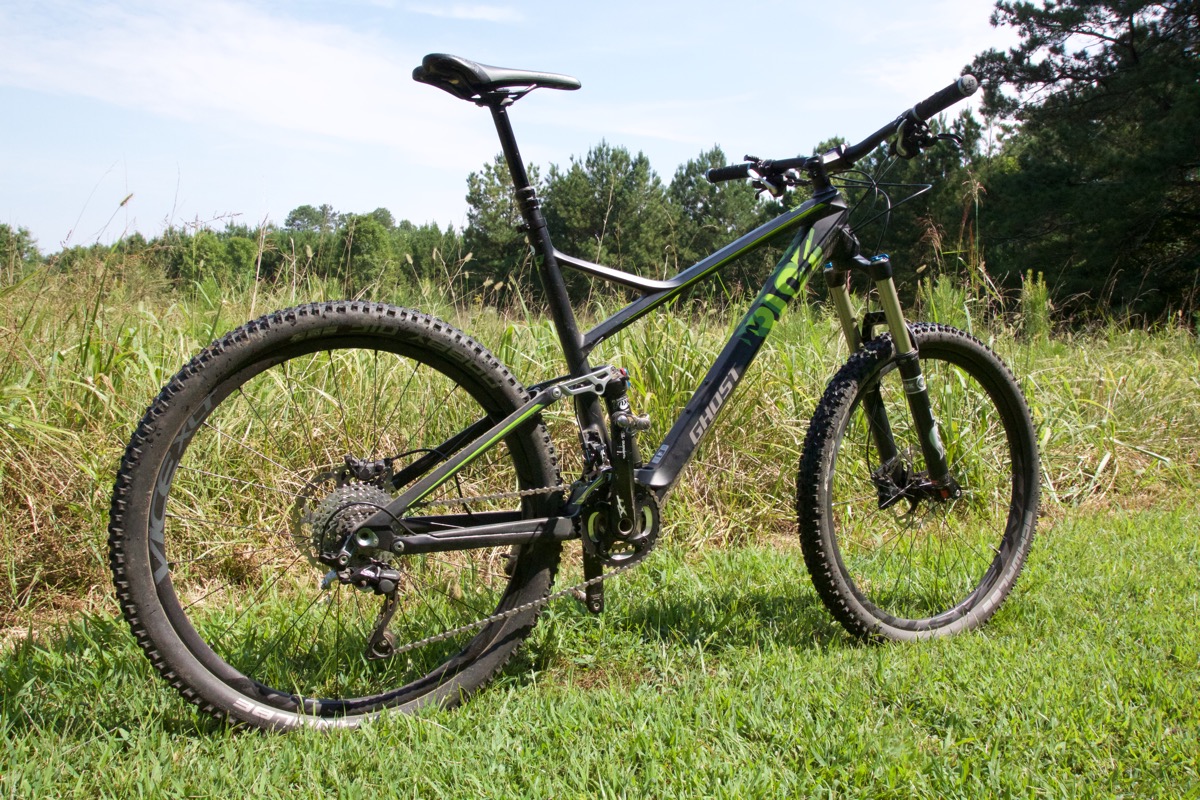 The Riot sits at the top of the GHOST line, with the 7 LC version retailing for $5,699 (there’s also the Riot 9, which retails for $7,999). The Riot 7 LC is a full carbon bike with a 130mm Horst-link suspension design and sports a 2×10 XT drivetrain, XT brake set, and RockShox Reverb internally-routed dropper seatpost.

The GHOST Riot 7 LC features a Fox Float 32 fork up front and a Float CTD in the rear with 130mm of travel front and back. The seatpost is a RockShox Reverb Stealth dropper. 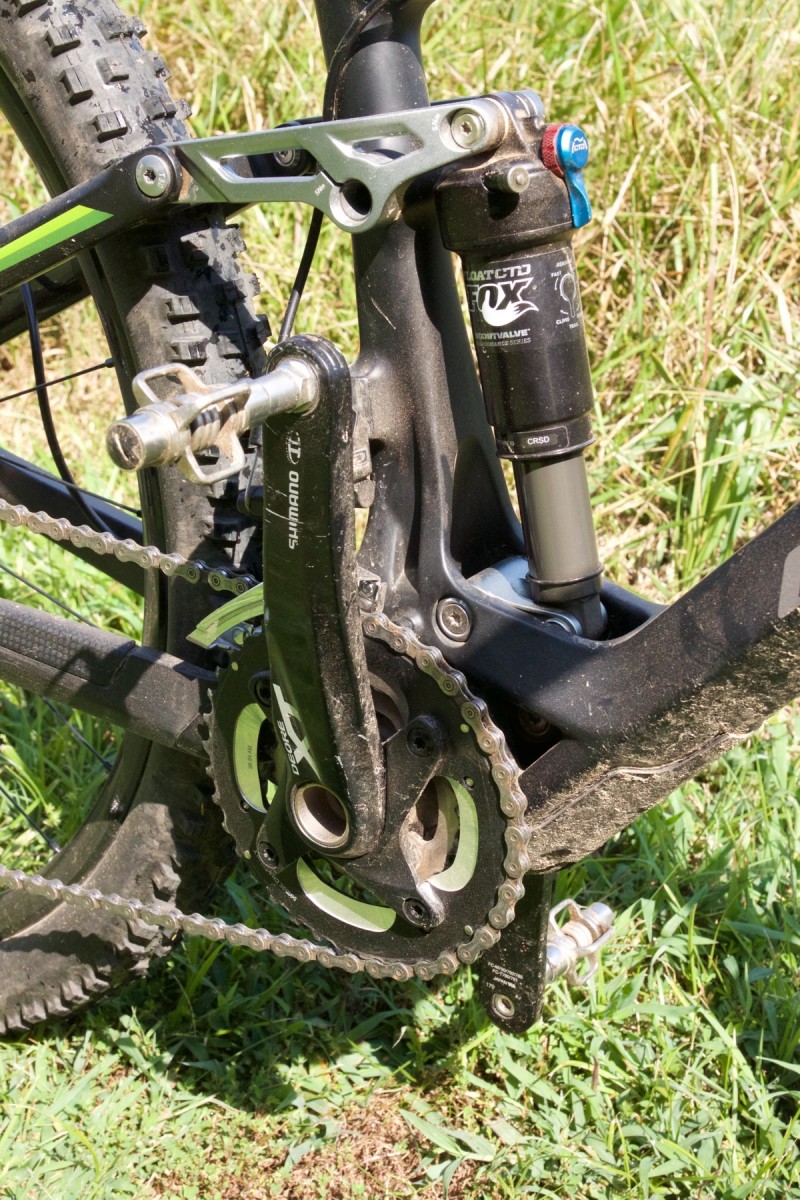 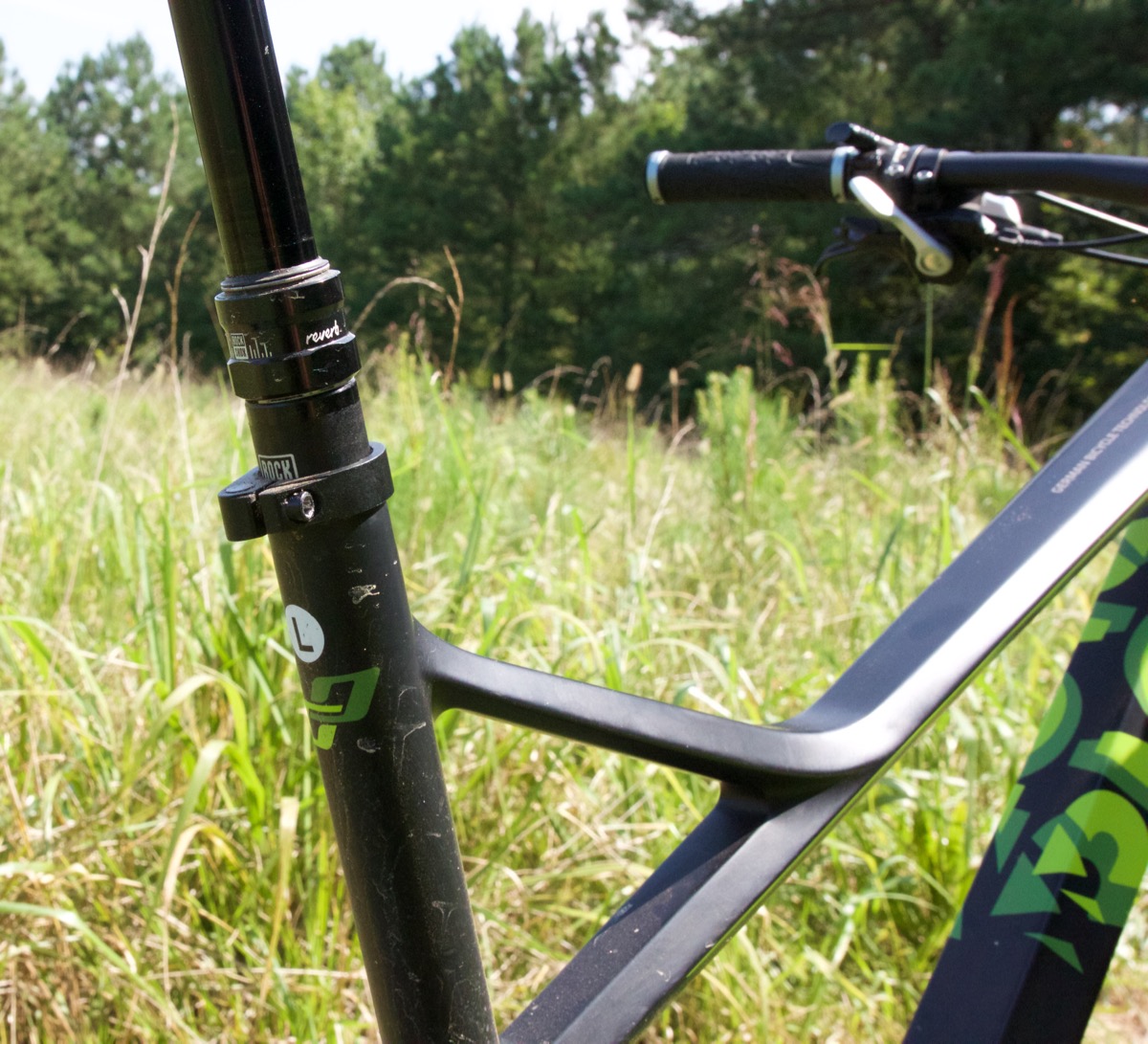 The Riot is a 27.5 bike, and the wheels on the bike I tested were Easton Vice XLTs with Schwalbe Nobby Nic 2.25″ tires. The 740mm handlebar and stem are GHOST-branded alloy parts. 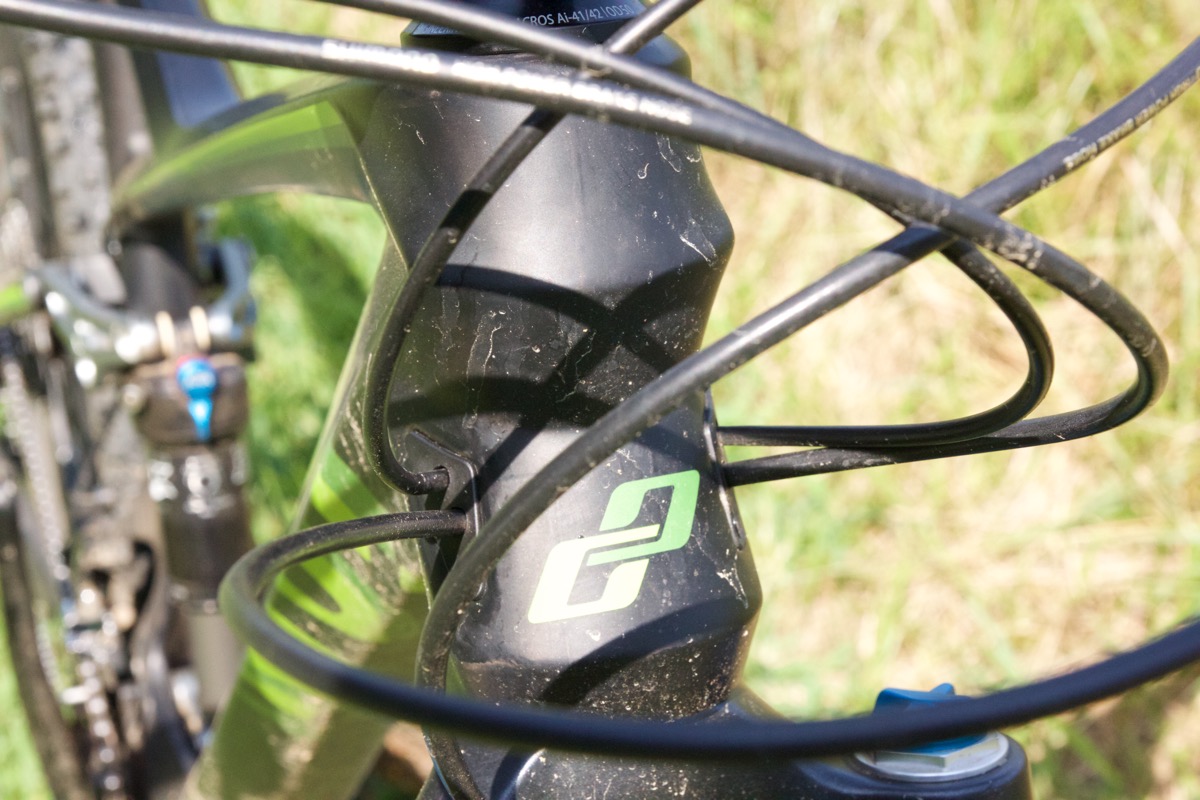 The internal cable routing on this bike is truly exquisite, making for super clean lines and (ideally) reduced maintenance and repairs. I’m digging the paint job too, though I’m still not a fan of matte finishes because they’re harder to keep clean.

The average weight for this build is right around 27.25 pounds, which isn’t bad for a 130mm-travel bike.

Admittedly I spent a very limited amount of time on this bike, but I can tell you that it pedals well! In setting up the suspension, I learned the Riot bikes typically run a little stiff; that is, the bike techs routinely put less pressure into the shocks than the recommended values based on rider weights to get the correct amount of sag. I would say this compares favorably with similarly-stiff bikes I’ve ridden, like the Specialized Camber, which exhibit very little pedal bob. Of course, the tradeoff is that small bump compliance suffers a bit, though good luck truly bottoming the Riot’s shock out, even on big hits.

The Riot 7 LC cockpit setup was extremely dialed with wide-ish bars and a short stem, making the bike very maneuverable even through tight, twisty singletrack. The front end on the bike I tested (size: L) felt a little low, though part of that is due to the fact that it’s not a 29er and I’m 6′ 3″ tall. Acceleration was quick and snappy and the XT brakes, as always, provided tremendous stopping power. 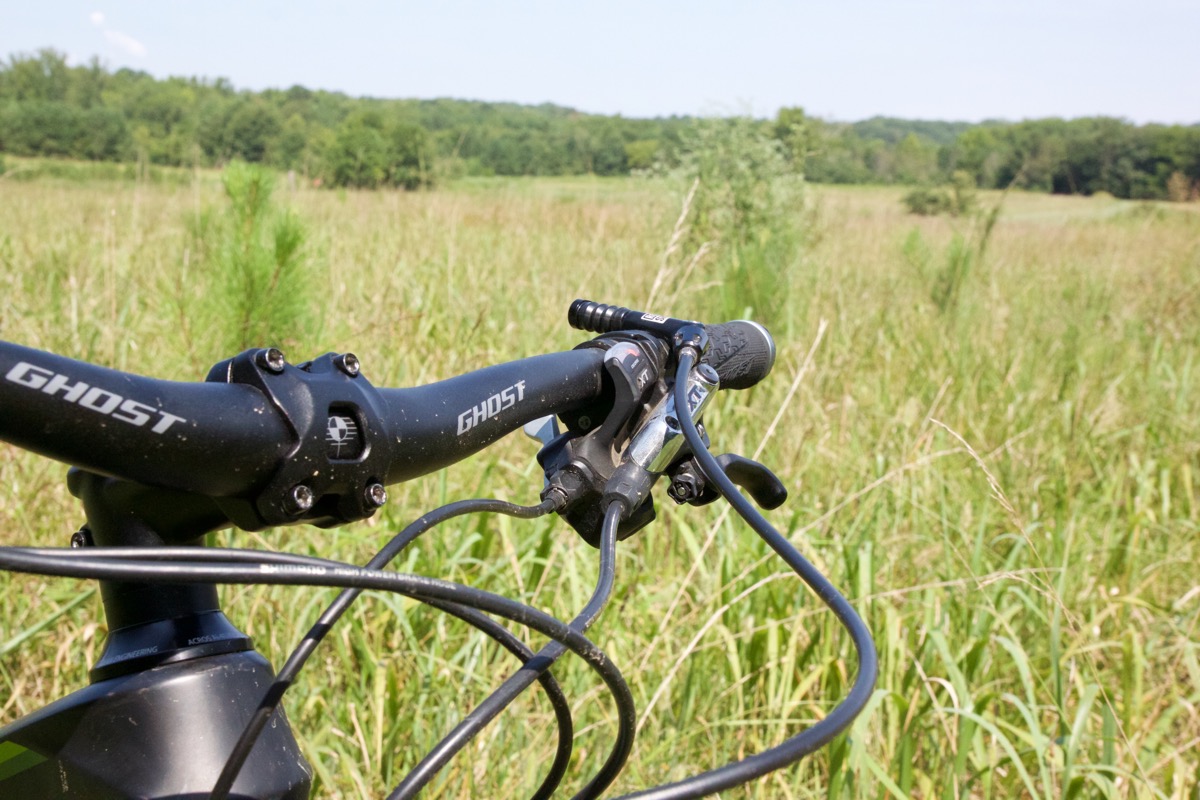 The Riot 7 LC features a 67-degree head tube angle, which is pretty slack by trail bike standards, making it a blast to ride on the descents. I got a chance to ride this bike on a brand new gravity flow trail, and it absolutely railed! The bike features short, 430mm chainstays, which makes the Riot more even more nimble and playful on the trail. Compared to the Riot 9, the Riot 7 LC sits toward the more aggressive end of the trail riding spectrum, making it a good choice for riders who enjoy competing in local enduro events in addition to frequent trail rides.

My only real beef with the component selection on this bike is with the tires: they’re just not wide enough. Slap wider rims and a 2.4″ tire (if it will fit) on this bike, and I’m pretty sure I could ride it anywhere.

The GHOST Riot 7 LC is a high-end, well-designed trail bike featuring some of the best components money can buy. Not only that, it’s backed by REI’s satisfaction guarantee and excellent support, not to mention REI members get 10% of the purchase price back as part of their annual dividend. This is definitely a bike to consider when it’s time to upgrade!

Your Turn: If you’ve ridden a GHOST mountain bike, tell us what you thought!

I upgraded to the Ghost Tacana Pro-6, about a month ago. I was riding a GT karakurom. The difference between the two is immediately noticed in the stand over height and the over all length. The GT being the longer-taller feeling bike. Both are 29er’s.
I’m a total novice and 6’5″, 240lbs..so I can’t and won’t attempt any serious commentary-critique regarding advanced or technical riding, I’m simply not qualified. So, I can say that the Ghost is infinitely more nimble, my Hill climbing has really improved as well. Odd given that the Ghost has considerably more frame flex.
On road trips, however, the GT outperformed the Ghost. Big deal, because it’s a MNT Bike and off road is where it counts! A little additional info..,Both frames are “XL” and I swapped in a 180mm crankset on both bikes.

Thanks for the good (and corrected) review Jeff, and for Jamie’s wisdom as well. I got my Riot 7 LC in late June and upgraded, in anticipation of your evaluation, both wheels and tires, among other elements. I love riding my Riot equipped now with Stans Flow wheels and Maxxis Ardent 2.4″ rubber, tubeless of course. But I also put on wider bars, shorter stem and converted to single chainring. Regardless of those modifications, the bike eats up downhill bumps and seems to offer everything I need to grow into currently for my Colorado Front Range riding style.