Ellsworth is yet another convert to the 27.5+ life, with two versions of the Epiphany available with the plus-size tires: carbon and alloy. 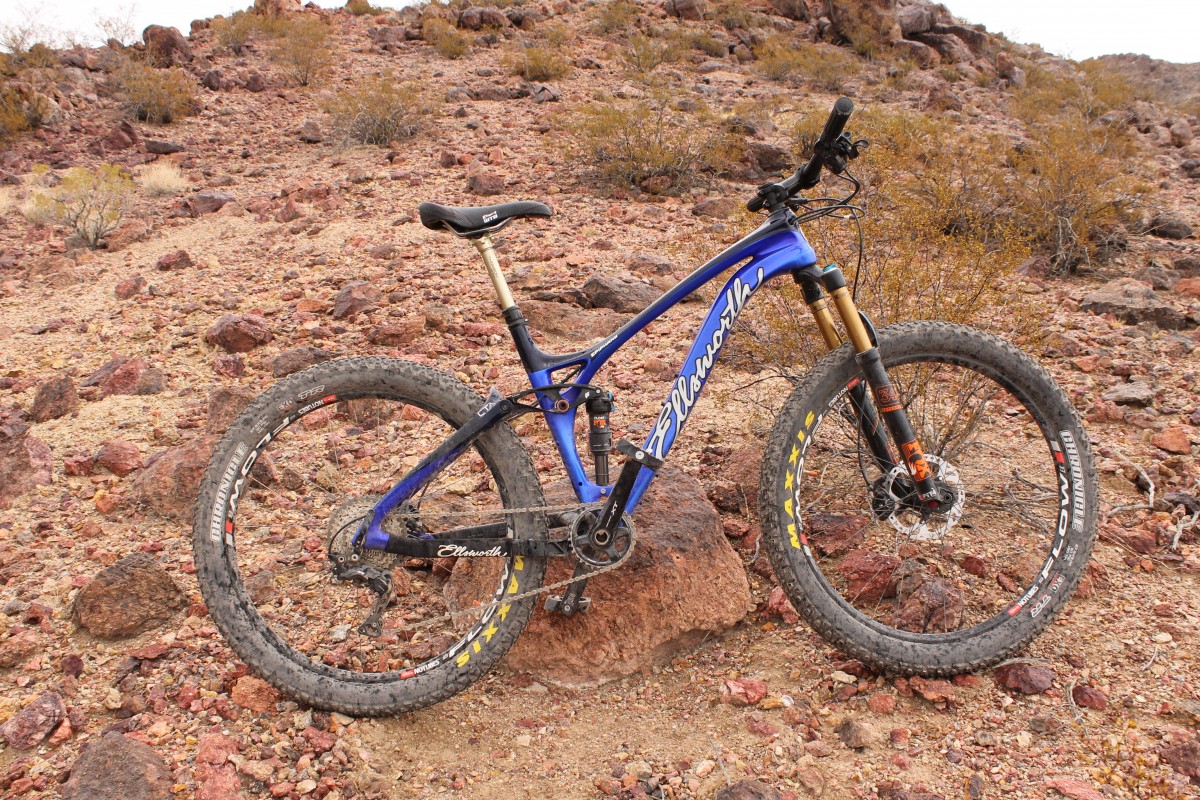 I tested the carbon version, which is the XC-oriented rendition of the Epiphany+. The bike weighs in at 29 pounds complete, and is spec’ed with a Fox 34 fork, Stan’s Flow EX Wheels, Maxxis Chronicle tires, an XT 1×11 drivetrain, XT brakes, and a Thomson Elite dropper post. Weight is 29lbs, and MSRP is about $5,500

The carbon Epiphany runs 120mm of travel in the rear and 130mm in the front. It comes stock with a 90mm stem, and the headtube angle is a relatively-steep 69.8 degrees.

Out on the Trail: Carbon VS Alloy

The first thing I thought as I began pedaling the Epiphany+ is, “this bike has a long top tube!” I stayed with my standard medium size, but the top tube itself felt long, and the addition of a 90mm stem stretched the cockpit out even more. The geometry also felt steep: uphill climbing was superb, but descending wasn’t as confident.

More on the handling below, but after getting back to the demo tent, I learned that the carbon Epiphany+ is Ellsworth’s XC 27.5+ bike. And while the Alloy shares the same Epiphany+ name, it’s a total different beast.

In comparison to the stats above, the alloy sports a slack 66.5-degree headtube angle and a short 50mm stem. While the travel lengths are the same in the alloy, changing the geometry this much totally changes the way the bike handles, making the alloy the “trail” sibling in this MTB family.

So if you’re shopping for an Ellsworth Epiphany, don’t think that the alloy is just a cheaper version: it’s a completely different bike.

Handling Aboard the Ellsworth Epiphany+ Carbon

While I normally feel much more comfortable aboard a trail bike than I do an XC bike, the Epiphany+ Carbon stands alone as the only full-suspension 27.5+ bike that I’ve ridden–or even heard of–that’s specifically intended for XC riding.

While some might scoff and say, “plus size tires are too heavy and slow for cross country riding,” then they haven’t ridden the Epiphany+. At 29lbs stock, thanks to the firm pedaling platform provided by Ellsworth’s Instant Center Tracking four-bar linkage, the steep headtube angle, and the stretched out cockpit, the Epiphany danced up the mountainside at near-lightning speed. This bike is designed for dropping the hammer and pedaling at top-speed!

I think this may have been the fastest-climbing bike I rode at Outdoor Demo, even over standard XC mountain bikes with non-plus wheels. The plus-sized tires significantly increased the traction when climbing in the loose, pebbly desert conditions. Instead of thinking about keeping my weight on the rear tire and maintaining traction, I was able to just hammer up anything and everything. The bike definitely didn’t hold me back: the only limiting factors were my legs and lungs.

When it came time to descend, the dropper post and 120/130mm of travel–combined with the large, confident tires–made for a great rip back down the mountain. However, the ultra-long stem was extremely limiting, especially in aggressive cornering. Leaning the bike and making it go where I wanted was a challenge, and it felt twitchy in chunky highspeed sections. A slacker headtube angle would have made for much better handling on the descent (found on the Alloy model), but I think that even the Carbon Epiphany+ model would have descended substantially better with a 50mm (or shorter) stem. Thankfully, if that’s a change you want to make after purchase, it’s a pretty simple swap.

I gave the Ellsworth Epiphany a 2/10 on the calf-bang factor scale. While it’s not a 0, a 2 is not bad at all. I think I could live with a 2 rating, and possibly make some cockpit adjustments (seat fore/aft position, cleat position, etc.) that wouldn’t significantly affect pedaling efficiency but could help mitigate the amount of calf-bang.

I have the alloy version. It’s my first full suspension bike so I have nothing else to compare it to other than my Krampus. But I think it’s amazing. I’ve never ridden so fast, smooth or effortlessly. I took it to the skatepark to cruise around and with the seat dropped catching a little air is easy and confident. Even for a 45 year old man.
I’d like to know how wide of a 29er tire I can fit in the frame if I convert?