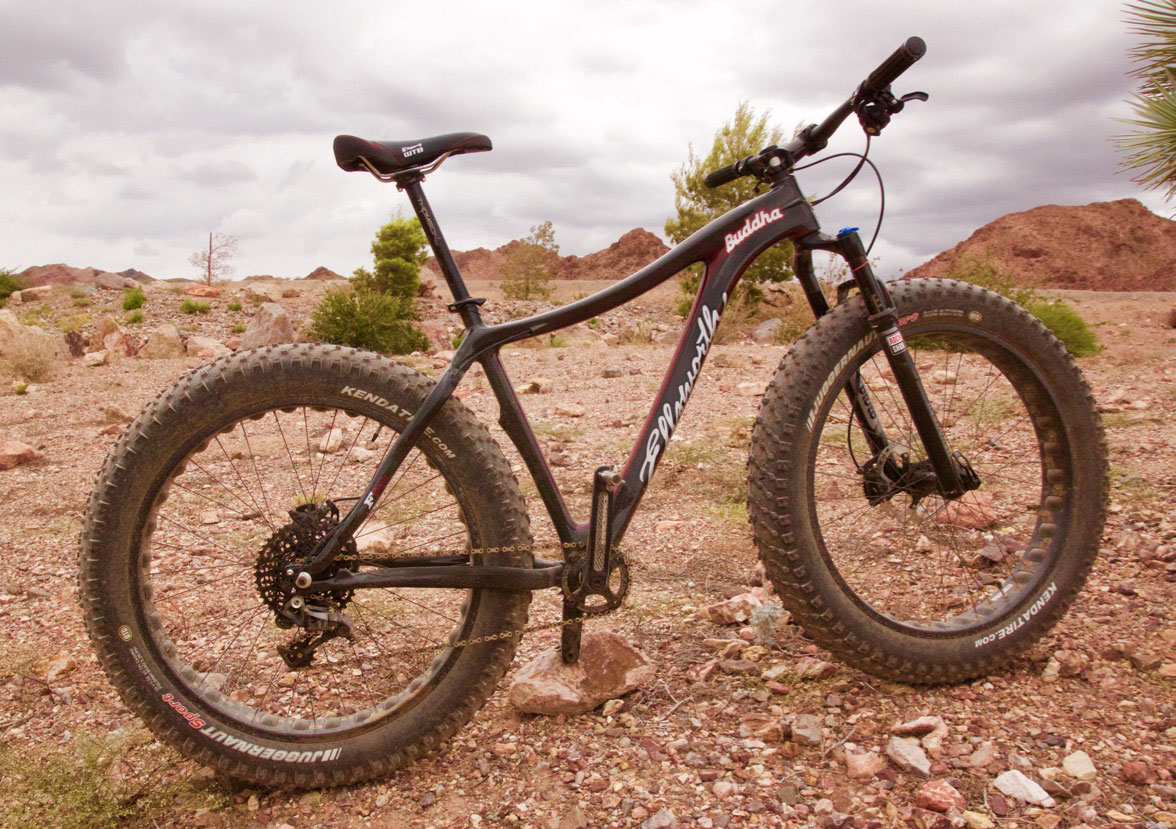 Last September, BST Nano Carbon announced its purchase of the Ellsworth bike brand with the stated purpose of showcasing the company’s carbon fiber technology within a high profile cycling brand. Well, this year’s Outdoor Demo at Interbike was “showtime” for me, as I tested the Ellsworth Buddha carbon fiber fat bike.

Ellsworth offers the Buddha in just two sizes, officially designated “medium” and “large” with seat tube lengths of 18″ and 20″, respectively. The thinking is that most riders should fit one of these two sizes and luckily for me, the large is just my size. 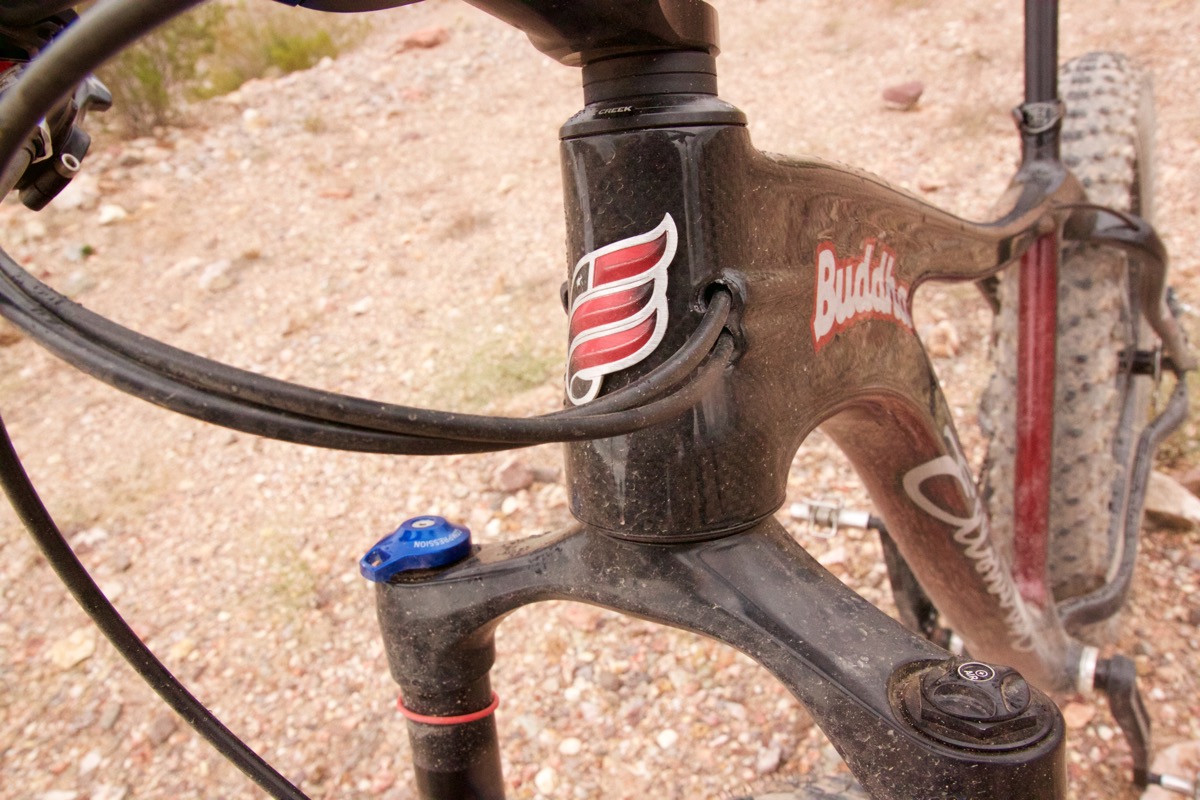 The Buddha frame is beautifully constructed from BST Nano Carbon composite material and the swooping lines reassure the rider that this is indeed an Ellsworth. The graphics are decidedly Ellsworth too, and the head badge gets an updated treatment that matches the pixelated, gradated look in the new parent company’s logo. The Buddha features svelte internal cable routing and a glossy, clear coat finish that shows off the carbon weave within the frame. 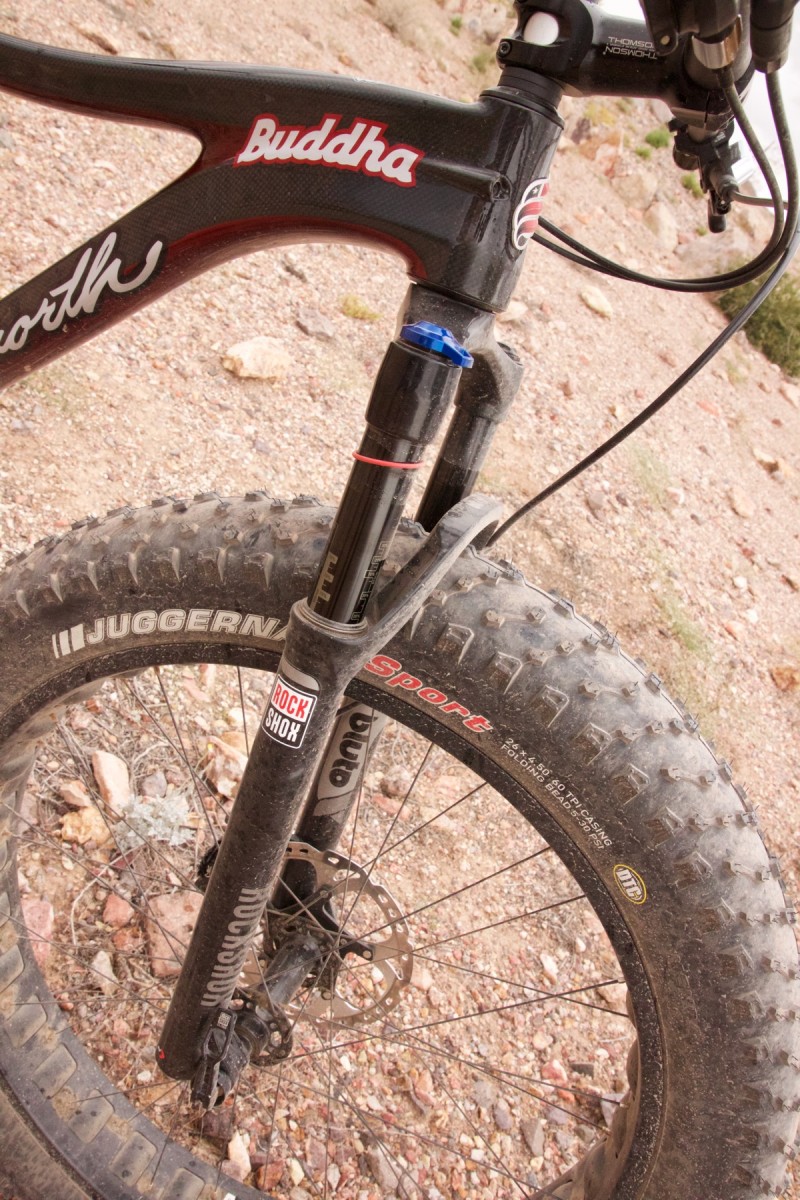 All three builds offered by Ellsworth feature a RockShox Bluto 100mm suspension fork. I was told the bike I was riding weighed about 33 pounds all built up, which isn’t bad for a fat bike with suspension fork, though as built it’s not the lightest carbon fat bike out there by any means. The frame is designed to accommodate up to 4.8″ tires which, is at the upper end of the fat bike tire width spectrum.

I love riding fat bikes on dry trails, especially those with suspension (front or full). Right out of the tent the Buddha climbed well thanks to its super stiff carbon frame. Handling felt a bit awkward at times however, mostly due to the hugeness of the tires. In my experience, 4-inch and wider tires are best left to snow riding, which is clearly well within the Buddha’s wheelhouse.

The Buddha felt good through technical sections and tracked the trail well over bumps at speed. Although the tires and fork did a good job soaking up larger rock strikes on the descents, I couldn’t help but feel the harshness of the rear end on this bike. To be fair, this is the same thing I’ve experienced with every carbon hardtail I’ve ridden. Carbon is meant to be stiff, which makes it super responsive and great for climbing–but man does it hurt coming down.

The upshot is fat bike riders can “tune” some of this harshness out with lower rear tire pressure and understandably, the tires on demo bikes at Bootleg Canyon were running high pressures to combat regular flats in the desert environment. Don’t forget, hardtail fat bikes (especially 4.8″ fat bikes like the Buddha) are truly at home in snow, not among the rocks and chunder.

The Ellsworth Buddha offers a wonderful showcase of the high quality carbon manufacturing and design being produced by BST Nano Carbon. With builds ranging from $4,495 to $5,995 ($4,995 as tested), this is one fat bike that’s sure to turn heads at the trailhead.