The Surly Karate Monkey, or “K-Monk,” as it is affectionately called, has been around for a long time. It was one of the first production 29ers, and has developed a cult-like following of people who swear by its steel frame and simple design.

This year, the ole K-Monk got a bit of a revamp, offering more versatility to accommodate a vast array of riding styles. It’s now 27.5+ compatible. There are internal routing capabilities for a dropper seatpost. It’s designed to run up to a 140mm suspension fork. The geometry got slacker. 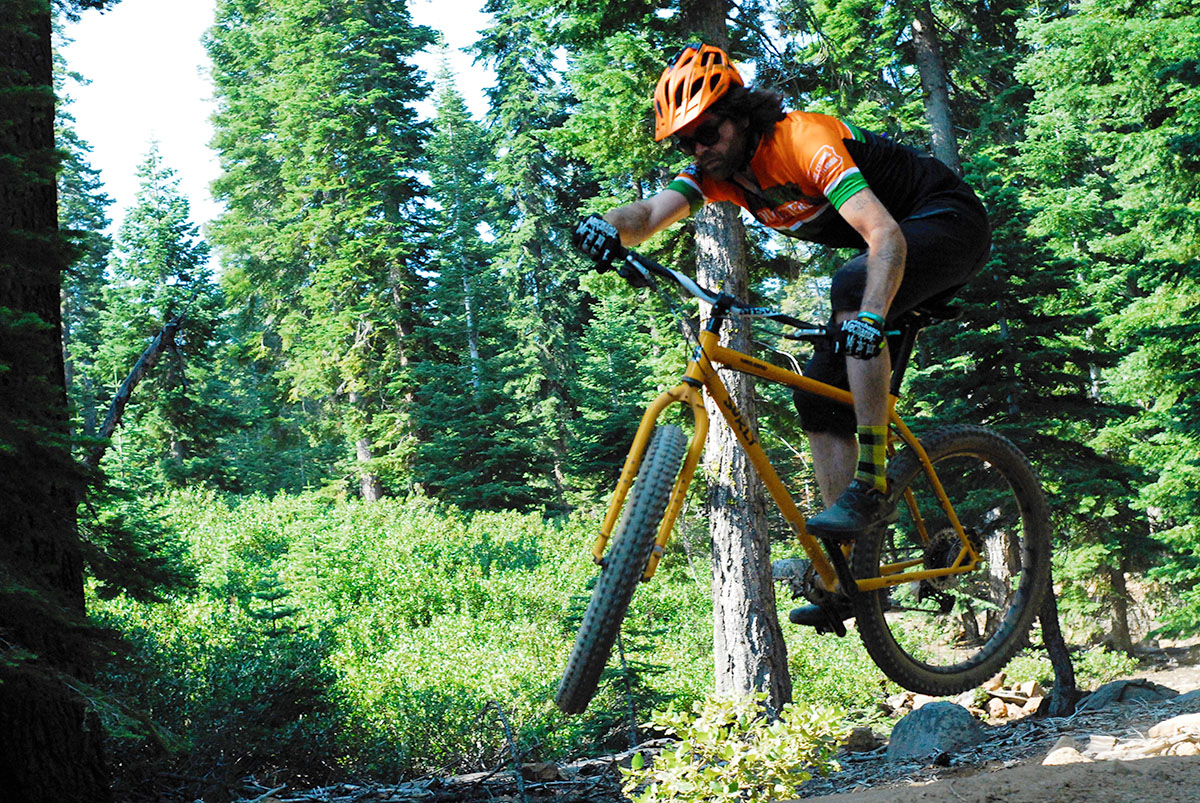 After seeing the revamped K-Monk in the showroom at Saddle Drive, I knew I’d need to get on one and try it out for myself. If you’ve read some of my other articles, you probably have guessed that I have a special place in my heart for simple things like rigid steel bikes.

I took one for a spin as soon as the expo opened for the day, riding the lift halfway up the mountain at Northstar, and then climbing up gravel for a while before jumping on singletrack. I felt a little funny riding the lift at a downhill ski resort with a rigid bike. But this was my first lift-serviced MTB experience, so it all felt pretty weird anyway.

When we started climbing gravel, I began to smile. It felt good. I was glad I’d gotten a geared version (they had singlespeeds available for demo as well), because my lungs still weren’t used to the altitude. Where I live, 3,000 feet of elevation is high. Here I was around 7,000 feet or more, and definitely feeling it, both while cranking up a climb, and after a night of beer consumption, which I learned my first day at the event.

To be honest, grinding up the gravel road on the K-Monk was the best I’d felt on a bike yet at Saddle Drive, and I’d ridden a number of different bikes the day before. The cockpit felt dialed. The small frame fit all 5’3″ of me perfectly. Standing up and mashing felt confident. I like to do that occasionally, even when I have gears. Sitting and spinning all day long makes my back hurt after too long. The Karate Monkey climbed well no matter what position I wanted to be in.

I decided to take a slightly different path than the demo loop that was already laid out for us. I’d done those trails too much already. I headed towards Sawmill Lake on a mix of dirt roads and singletrack, stopping for a minute at an abandoned train car to enjoy the still-cool morning and do a quick photo shoot. 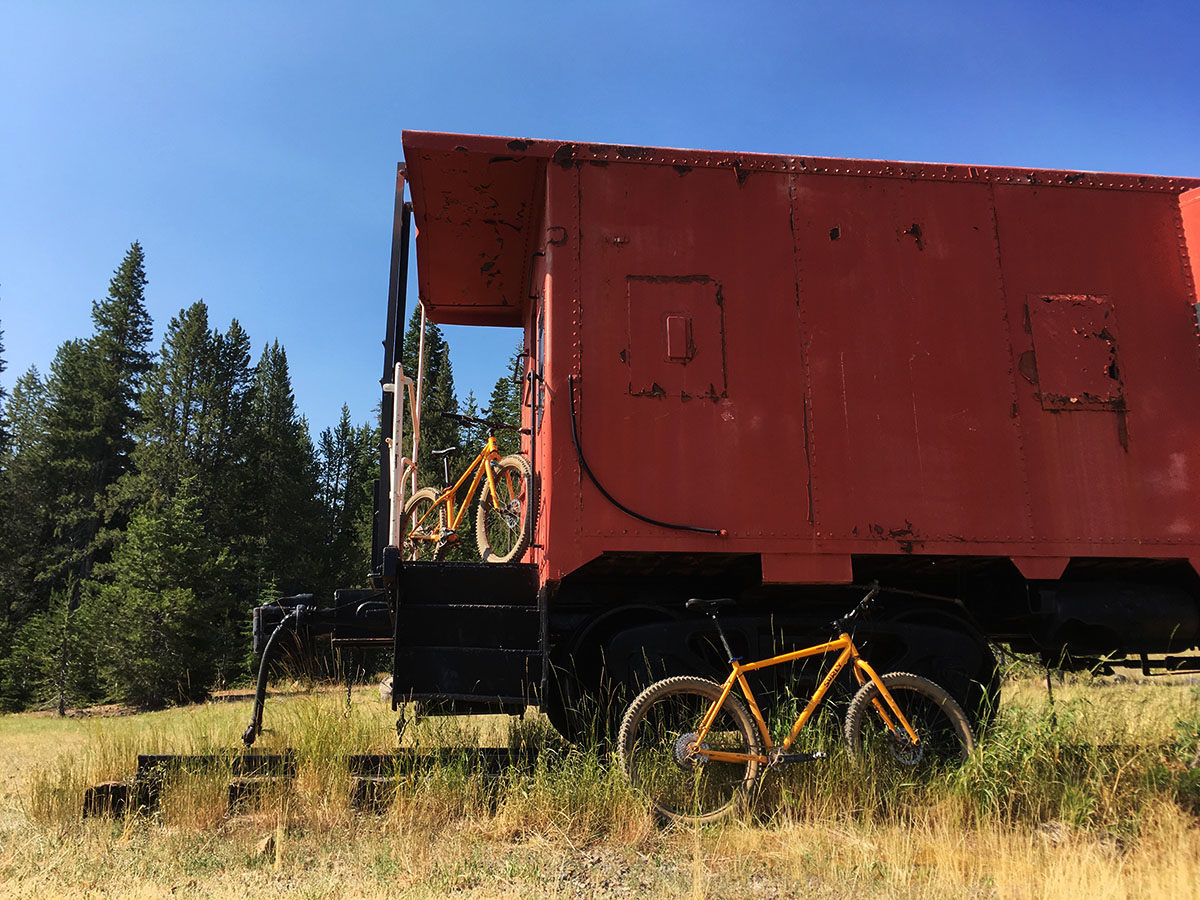 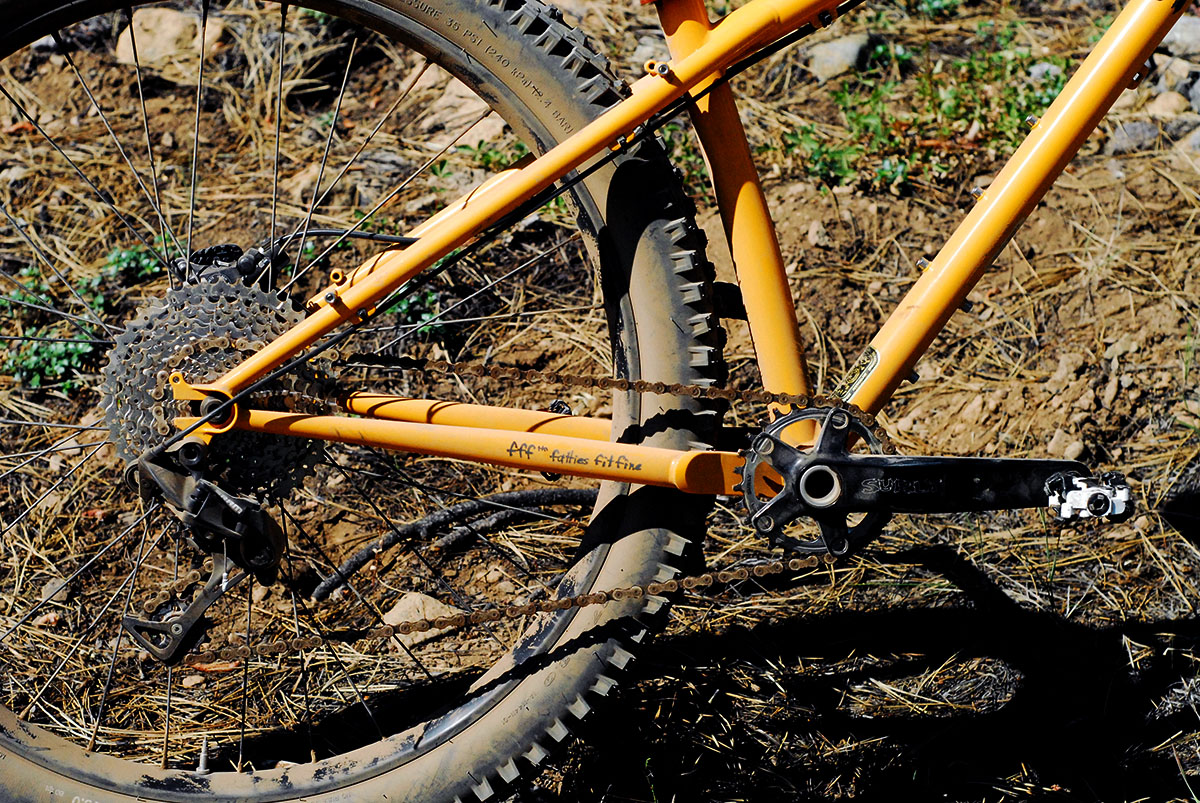 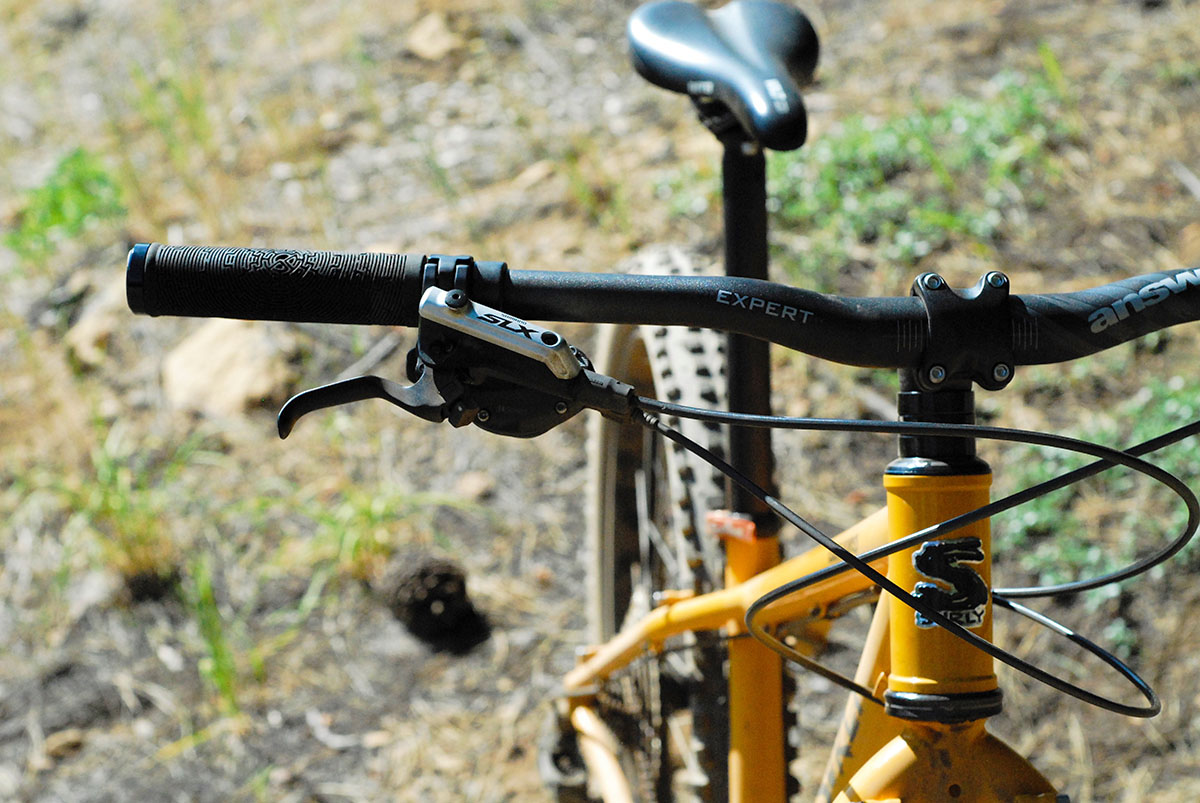 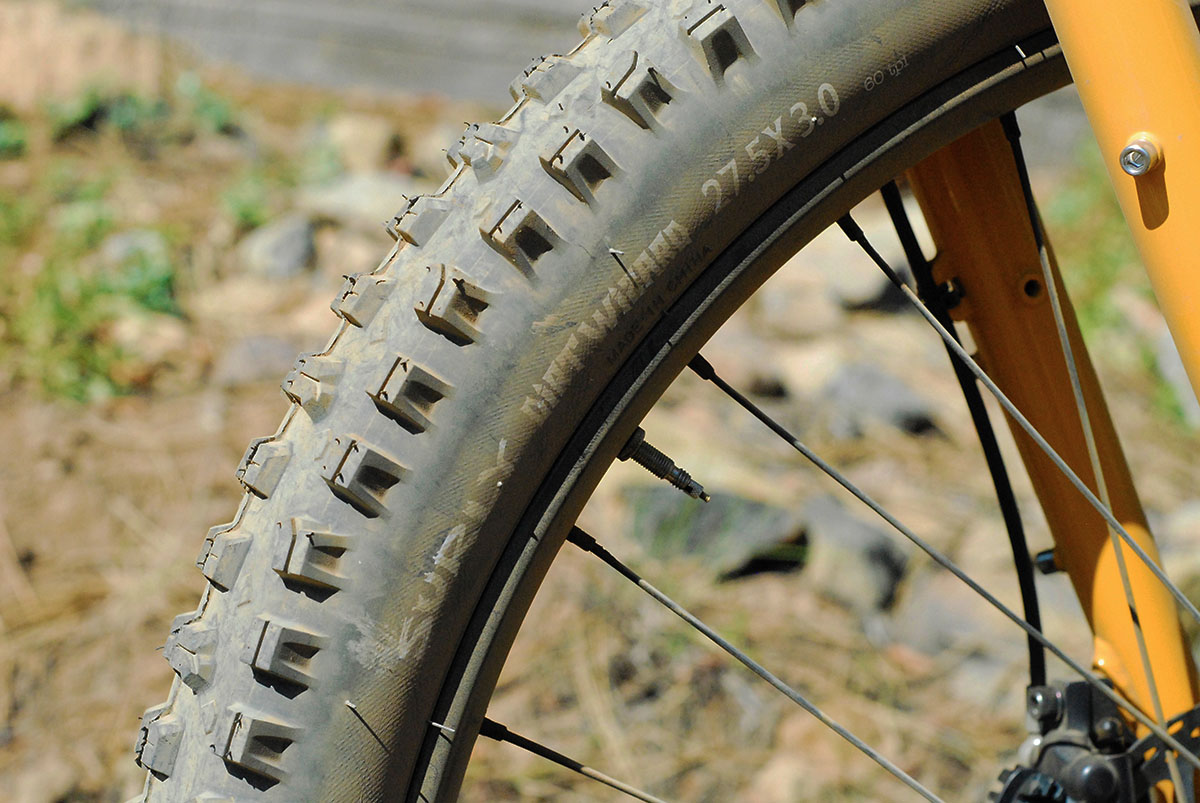 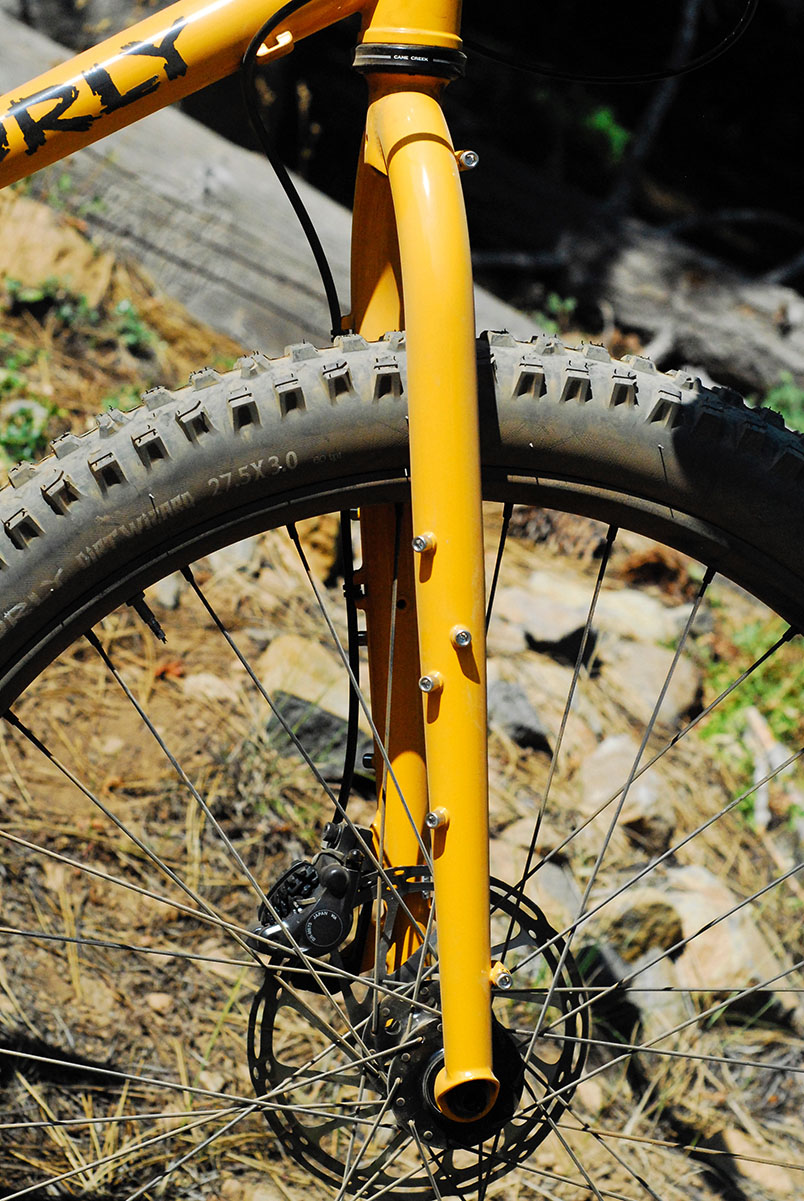 I took this moment to also check out some of the details of the bike. Like I mentioned before, it offers internal routing for a dropper, which as Greg argues (and I’m inclined to agree), is the number one upgrade that makes mountain biking more fun. And, while the Karate Monkey comes in a rigid package, it happily accepts a suspension fork. Plenty of bolts on the frame and fork also make this rig a great option for bikepacking. It will fit front and rear racks, large cages for hauling gear, a water bottle on the downtube, and basically anything else you wanted to put on this bike.

With the K-Monk, Surly has also introduced what they call “Gnot-Boost spacing,” which allows for the fit of different sizes of MTB hubs, including 142 and 148mm thru-axle, or 135mm quick release. How does this work? Little spacers can be added or removed, depending on whichever type of hub you choose.

If you decide you’d rather run a different tire size, no problem. The frame will fit up to 29×2.5″ or 27.5×3.0″ tires. It also easily accomodates both singlespeed and geared setups.

This is a super versatile bike. And it’s way fun, too. Did I mention that yet?

I was interested to see how it would perform on the descent, considering that the trails I’d be on were designed for downhill bikes. Granted, they were the blue intermediate trails, not the double black diamonds, but they still offered a lot of chunk, tons of rollers and berms, tight switchbacks, and plenty of loose dusty material that was way too easy to wash out in, especially after the high volume of use the trails were seeing with the Saddle Drive crew.

I have to say, I was pleasantly surprised. While 3″ tires didn’t entirely make up for not having suspension, they did a lot to soften the ride. The Surly Dirt Wizards that were on the bike did a great job in the dust, inspiring confidence and holding their own in some tough riding conditions. The frame geometry felt great–nimble and fun, yet stable and not at all twitchy, with a 69-degree head tube angle. This bike easily held its own against many of the more “fancy” offerings of the week.

“I want this bike,” was my thought throughout most of my ride. I would have loved to ride it all day long, but that would have been unfair to everyone else, so eventually I made my way back to the booth to give up the pretty yellow (or orange, as they call it) steed.

I think with a dropper post and suspension fork, I’d never want to get off the saddle of the new Surly Karate Monkey 27.5+. Well done, guys. 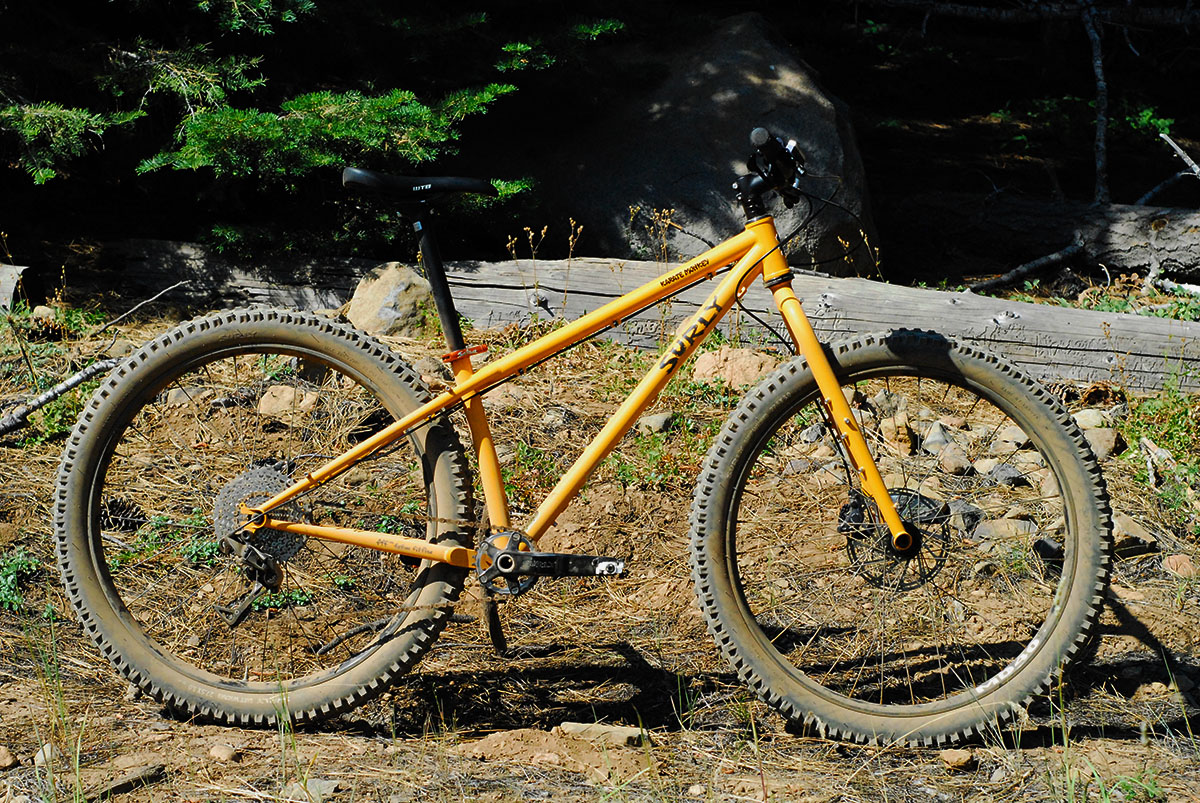 The new Karate Monkey will be available in mid-to-late fall. The 27.5+ geared complete version comes with the orange frame at $1,399 retail, and the 29″ singlespeed complete version comes with a purple frame at $1,175, though both frames are the same and can accommodate either setup. You’ll also be able to buy framesets in both colors as well as black. Sizes run from XS-XL. Check out more details on the Surly website.