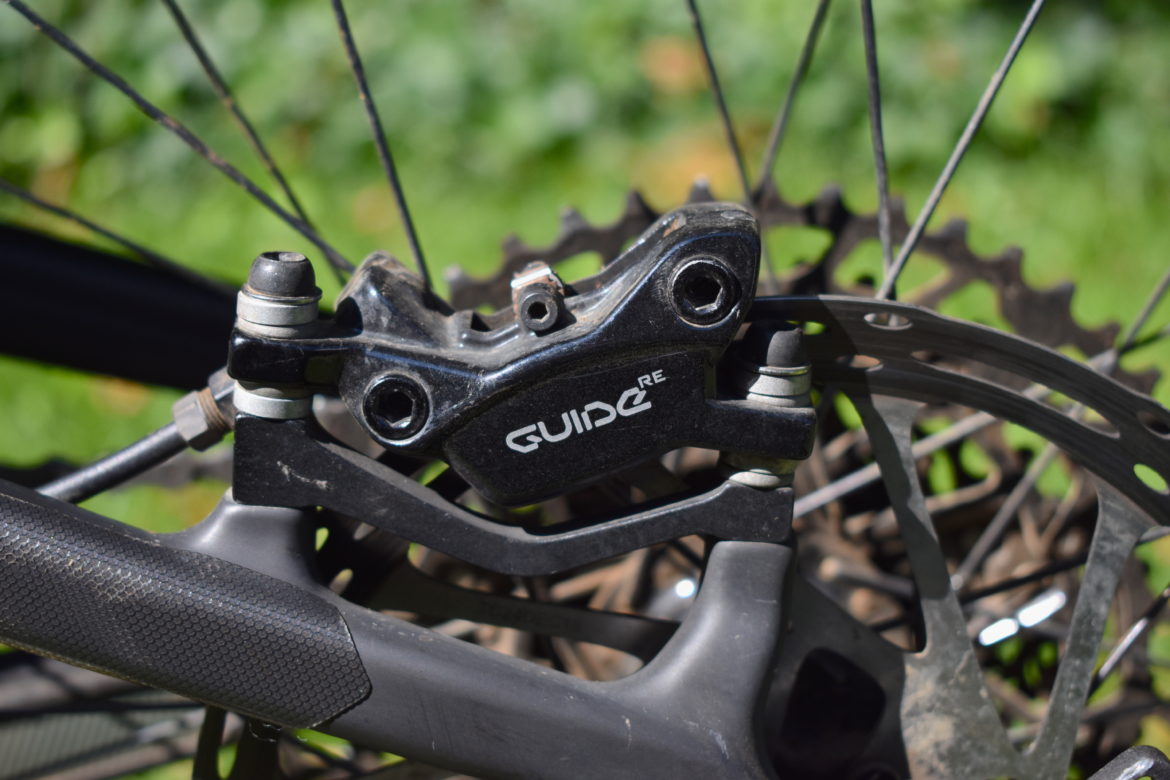 The Humble Guide RE is a brake that’s not exactly lusted after by the majority of people. With mountain bike technology improving year after year, the hydraulic disc brake is something that we’re lucky is at a point where we have a lot of good quality stopping options. Still, it’s a part that’s easy to get wrong, particularly when product managers decide to opt for something that’s going to cut some costs when speccing out a new range of bikes.

Enter the Sram Guide RE. The “E” stands for “electric”, or something along those lines because it was designed specifically for the rigors of e-mountain biking, while also seemingly pleasing those most penny-pinching of product managers. These may have been developed for e-bikes, but that doesn’t mean they’re limited to them. This season we’ve been seeing a number of lower-end enduro bikes specced with the humble Guide RE.

So, what actually IS the Guide RE? Well, it’s not just a re-badged Guide R, thankfully. Those of you that have been in the game for a while might recognize the caliper as an old Code. SRAM has essentially dug up the tooling for the old Code caliper, which was well-respected in its own right as a downhill brake, and paired it with a Guide R lever. This combination actually produces a surprisingly good brake, that feels nothing at all like either a Guide or a new Code.

Sounds good so far, and it only gets better on the trail. A lot of people like SRAM brakes for their modulation, and the Guide RE delivers. Thanks to its large diameter pistons, its power is delivered slowly, rather than all at once. They’re definitely a lot less grabby than the current Codes.

I tend to find that a lot of brakes perform adequately on flatter, easier terrain. However where a lot of brakes fail to deliver is on steep, sustained descents. I’m pleased to report that whilst riding some of the steepest, roughest, longest trails that British Columbia has to offer, the Guide RE never once let me down. They always have plenty of power, never fade, and never leave me wanting more. They are obviously not as powerful as a newer Code (particularly one with Swinglink) or a Shimano Saint brake, but they are powerful enough for all but the heaviest riders and the hardest chargers.

This might all sound great, but obviously there are caveats. The Guide RE is a low-level brake, and as such it has low-level features. The finish is cheap, but who cares? There is no contact point adjust and the lever does not feature Swinglink like SRAM’s higher level brakes, which means lever feel isn’t great. The caliper does not feature SRAM’s Bleeding Edge bleed port, so bleeding is a little more tricky. It’s a bit of a heavy, unrefined-looking beast, but again who cares? It uses the old Avid CPS hardware which was always a little fiddly. The lever blades pivot on a bushing rather than a bearing, which means they rattle around a little while riding.

All of the above are relatively minor faults, and easy to live with. On the bright side, the Guide RE brakes do at least have a tool-free reach adjust. For me, my minimum requirement for any bike component is that it must work reliably so that I rarely need to think about it. This is particularly true of brakes. I’ve never had to think about my Guide RE brakes while riding, and that for me is a rare thing. It makes me wonder why I’d bother spending significantly more money on something else.

The Guide RE retails at $135 USD (compare prices and find online), and is comparable to Shimano’s MT520. For the price, I’d highly recommend this brake as a budget gravity brake, and if it’s specced on a bike you’re considering buying, buy with confidence.

Sam James
Originally hailing from the UK, Sam has been an avid mountain biker for over a decade and a shop wrench for almost half of that, Sam has worked and ridden all over the world in some dream destinations including New Zealand and Australia. Living and working in North Vancouver, BC, Sam wrenches for a high end bike store, and writes for the store and Singletracks in his spare time. Somehow he also finds time to ride his bike a few times a week in between all of that.

Know this is an older article, but thought I should add some context around the “not as powerful” as the current Codes.

To start, brake power is mostly a function of the system’s hydraulic leverage (the ratio between the slave cylinders total surface area in the caliper vs the master cylinder’s area in the lever), the mechanical leverage of the lever (distance from pressing finger to the lever blade pivot vs distance from the lever blade pivot to the cam that actuates the master cylinder piston), the contact patch size of the brake pad on the rotor, and the brake pad friction material composition. Factors like brake hose resistance to expanding during braking and technologies like Servo Wave also have an impact, albeit smaller. Shimano’s Servo Wave does increase power vs a non-Servo Wave lever by increasing mechanical leverage through reducing the effective length of the lever pivot to master cylinder actuating cam, but SRAM’s Swing Link does not behave this way versus non-Swing Link levers. Instead Swing Link reduces the lever throw required to engage the brake pads to the rotor and then increases additional lever throw as you pull more, slowing the rate at which power increases (hence the great modulation).

SRAM Codes, both the previous generation 2011-2017 that the Guide RE is based on and the newer 2018+ versions, all have the same hydraulic leverage ratio of 5.33 (15mm and 17mm diameter slave cylinder pistons and a 9.5mm diameter master cylinder piston). Similarly, the Guide and Code levers have the same mechanical leverage ratio of 6.14 (the code lever does house 30% more brake fluid than the Guide, thus contributing to a cooler running brake system). Lastly, the brake pads have a common size for Guide RE and Code, but Guide RE mostly ships with organic pads vs metallic for Codes.

What all this means is that, on paper, the Guide RE, the Code R and Code RSC will have the same ultimate power if they run the same pads and rotors.