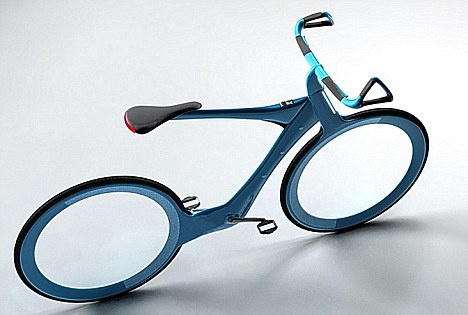 This week we came across an article showcasing some interesting bike concepts and as always it got us thinking about the future of mountain bikes. Of course the article is chock-full of folding/collapsible bikes and all-weather rigs which aren’t really cutting edge anymore – there are actually several production models of both. There’s also the Mountain Monk, or what we’re calling the “BikePack,” that’s a FS mountain bike you can wear like a backpack as you hike to the top of gnarly DH runs – but that’s last year’s news.

Two of the concept bikes from the article include spoke-less wheels – and we’re not talking about disked wheels here. In fact, it might be more descriptive to call these hub-less wheels since they don’t have those either (at least not in the traditional sense). In each case the hubs are essentially over-sized and nearly as large as the tires themselves. 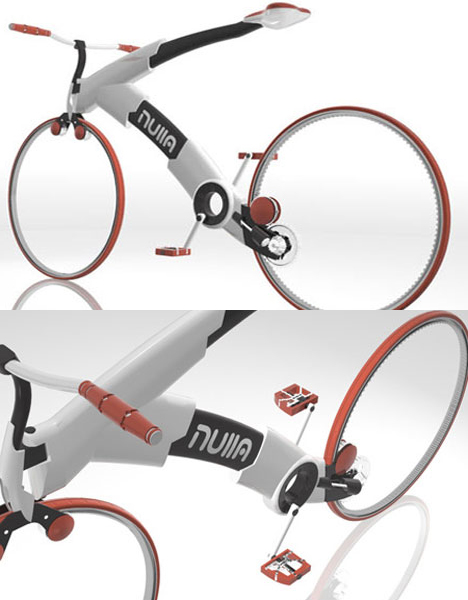 Of course there are pretty significant engineering issues to overcome with designs like these – namely friction between the wheel and fixed hub – and you can almost forget about multi-gear set-ups. The second design shown appears to use cog system similar to the Gates Carbon Drive but we’re not convinced the wheels would actually stay in place.

The benefits of spoke-less designs would be decreased maintenance (no truing necessary), lower weight, and decreased drag. The blue bike design above (from Olympic cyclist Chris Boardman) also looks like it would be extremely stiff since the wheel system is effectively integrated into the bike frame itself, giving the rider wicked fast acceleration. Boardman’s bike also conceals much of the drive mechanism which should also lead to lower maintenance.

Although we probably won’t see spoke-less mountain bikes on the trail anytime soon, it’s great to see designers pushing the envelope. We can’t wait to see what they come up with next!

The spoke free wheel is a neat idea. Too bad the frames look like BIKE magazine’s s***bike (an early 90’s mtn version of these: http://www.softride.com/bikes/bikes.html )

Nice, but just way too weird for my taste. Strange that they do closely resemble the ****bike though. Maybe the future to biking on the road, but far from off-roading.

Softride gave up on it. It is neat looking though.