Imagine my surprise when when a local bike shop employee sent me an e-mail informing me their Specialized sales rep had left a pair of new Specialized 29er tires for me to review. Sweet! I went to pick them up and was stoked to see the newly redesigned Fast Trak and the new Ground Control, both in the Control version and 2Bliss Ready.

Specialized got into the bike business with tires, and recently they felt like they had fallen behind some of their competitors. To up their game they went back to the drawing board on some of the tires and started using Finite Element Analysis (FEA) as part of the design process. FEA allows the tire to be modeled on a computer and run through virtual tests, which is much faster and cheaper than producing tires to test, and itmeans the first prototypes that are manufactured are further along in the design process already. The new Fast Trak and Ground Control are the first two mountain bike tires that use FEA in the design process. The Ground Control was produced a long time ago, but the new tire shares nothing with the old other than the name.

FEA allows engineers to get a good idea of how a tread block will react under load before any prototypes are produced. Photo: Specialized

Specialized says the redesigned Fast Trak has more grip and less rolling resistance than the old version. The tread pattern has been completely redone, and the tread blocks are now sipped meaning they have a small groove on the surface. I had the old version on both ends of my geared bike, so Im pretty familiar with it. I can say without a doubt that this new tire is worlds better than the old and I liked the old version already! The casing is much more supple and smoother rolling. It eats up little bumps and irregularities a lot better, leading to more stable cornering and higher cornering speeds. I actually had to increase my air pressure a few psi because the casing is so supple – it felt a little too squishy at the same pressure I used the old version at. Still, even with a few more pounds it rolled smoother and faster. 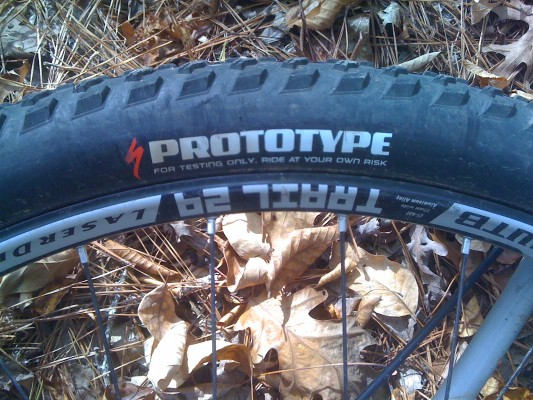 The Fast Trak tire I received was a final prototype version, identical to production tires except for this cool prototype decal on the sidewall.

Generally when a tire loses rolling resistance it loses grip as well, but this isn’t the case with the Fast Trak. It grips better in the corners, under power, and while braking. In true hardpack conditions its a fantastic tire, and in loose conditions its much better than you would expect with such small knobs. The sipping on the tread blocks (something the old version didn’t have) is certainly part of the reason for the increased grip. I didnt think it could really make much difference, but it does. The sipping basically gives you two biting edges on one knob. To feel it yourself you can press a finger on one of the knobs and try to slide it off you can feel the sipped edge roll up and dig into your finger. Cool stuff. 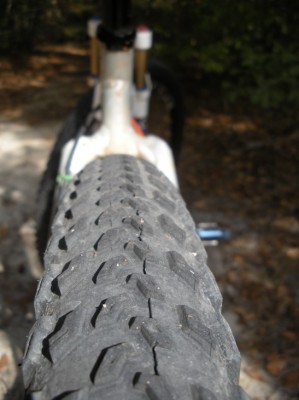 Fast Trak tread design. Nearly continuous center tread for low rolling resistance and larger siped shoulder knobs to bite in the corners. The round profile means you can really lean on this tire.

The Fast Trak now rolls almost as fast as the Renegade, but has much more grip. Because of this I would say the Fast Trak is a much better tire for most riders than is the Renegade. But if you want the ultimate in low rolling resistance, but still want semi-sure-footed cornering, put a new Fast Trak on the front and the Renegade on the back. Ill be trying this set up eventually, but with all the leaf litter on our trails this time of year I need something more aggressive on the front. But as a rear tire it works great, even with all the leaves down. 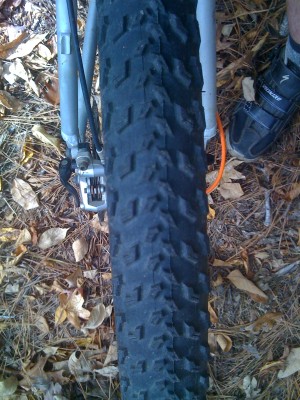 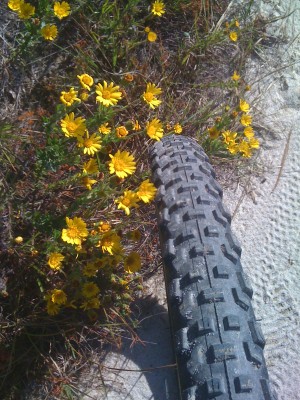 The Ground Control rolls much better than the widely spaced square knobs would lead you to believe. And it has a more square shaped profile than the Fast Trak.

Once again, it looks like all the money Specialized put into the R&D for this tire paid off. Just by appearance I could tell these tires would grip pretty well – and they do. The Ground Controls grip even better than I expected and seem to at least match the Captains for cornering grip in most conditions. The Captain does gripa little better in really loose conditions however.

What surprised me was just how fast the Ground Control rolls, because it doesn’t look like a fast rolling tire. I put the Ground Control on the front of my single speed, which has the very fast rolling Renegade on the back, and was blown away by the rolling speed. Topping a climb it felt like the bike was getting pulled down the next hill faster than normal, and motoring across the flats I felt like the tire wanted to just keep rolling forever. 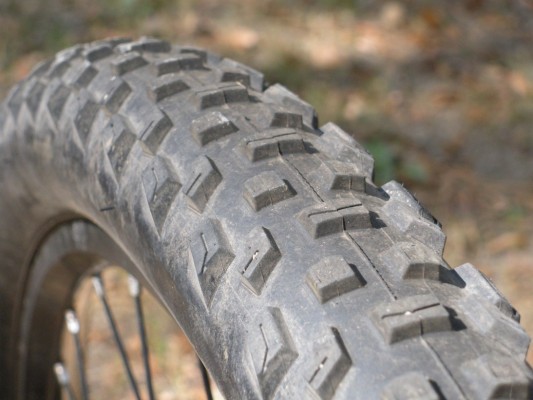 Close-up of the Ground Control tread. The siping on the tread blocks seem to make a big difference in grip.

Specialized hit the mark with both of these tires. The redesigned Fast Trak is better than the previous version in every way and the Ground Control has a ton of grip for as little rolling resistance as it has. I do wish Specialized would make a wider version, either a 2.3 or 2.4 would be great. It’s strange that the XC racing-oriented Fast Trak comes in a wider width than the Trail oriented Ground Control, for 29ers at least. I used both tires tubeless with Stans sealant and no issues at all. So who are these tires for?

If you value grip over speed, but don’t want something that rolls like a square, and don’t need a big tire – try the Ground Control.

If you value speed over grip, but want more grip than a near semi-slick like the Renegade – try the new Fast Trak.

Special thanks to Specialized for providing the tires for review. Get all the details on the Fast Trak here, and Ground Control here.

Pretty cool they’re using FEA on the tires now. In the old days companies used to just build a prototype, session it on a fixed loop with the same rider, and see how lap times improved with changes. They didn’t really care why certain designs worked, just that they did! That’s ok for a while but it doesn’t help you make the leap to the next big thing very quickly/easily.

I’m sure real world testing is still a huge part of MTB tire R&D but it makes sense to start with FEA to come up with paradigm shifting designs.

Fast Trak is on my wishlist now.

The Fast Trak looks like a really sweet tire and that’s a very respectable weight for a tubeless-ready 29er.

Your impressions of it are similar to how the 26″ Geax AKA performed for me.

My 26″ epic expert carbon came with s-works captain (F) and fast trak lk (R). Works great in all of our east coast single track conditions. When they need replacement… suggestions? new2.1 GC rear or new fast trak? Alternatives up front? e.g. s-works purgatory. At this point the bike rolls super fast and climbs great as is, but alway room for improvement. Thanks for any input

The new Fast Trak is mostly an improvement in rolling resistance, not much extra climbing traction. It is a little better, but not much. So, I would suggest trying the ground control if more grip is what you’re looking for. It’ll offer a good bit more climbing traction with those larger squared knobs, and the extra spacing between the knobs means it won’t pack up with mud (which you’re bound to see more of with winter on it’s way) as much.

You could also try reversing your fast Trak you have now, put it on the tire “backwards”. My local specialized dealer said the ground controls are on back order right now, so unless your shop has one in stock you may have to wait a while.

That was the plan, but the GC will not be available in 26×2.1until lat February. Meantime the Fast traks are taking a beating…. What sbout taking my front s-works 2.0 captain and putting it in the rear and replacing it with the AVAILABLE 2.0 s-works purgatory which my lbs can have for me on Wednesday? Thanks for the feedback.

That would be a good combo for this time of year, but, it will roll slower than what you’re used to. But there will be lots of grip.

ok, but should I still put an order in for the GC or stick with the Purg/captain?
PS the 2011 Fast Trak Lk has been great for the most part….

That’s up to you man 😀 ! You could order the GC and ride what you have now till it comes in, or order the CG and buy a Purgatory at the same time. Use the Purgatory/Captain thru the winter, then in the spring put the CG and a Fast Trak (one of your old ones or a new one), and love your new fast rolling set up.

Mounted a s-works purgatory 2.0 on the front and put the s-works captain 2.0 on the rear on my epic expert carbon. Great combination. The purg does not wash out in the front like the captain and the captain makes like I am cheating on climbs compared to the fast trak lk’s. Can lean while pedaling at speed in sharp corners as before. Cna sewe nothing but upside. How could the CG be an improvement? No real noticeable slowdown on hardpack (rode on trails in 28 degrees this AM…). Input?

Question which tire would you recommend for me? I live in Kazakhstan and you have to ride on the roads to get out to the trails hereabout 2 to 3 miles. Its hard packed to very soft sand and other places on the ride has a lot of small to medium rocks but once you get out where you want to ride its nice and smooth.