There’s no doubt that today’s 150-160mm-travel bikes are extremely capable. Most of the current crop of long-legged trail bikes could blow older downhill bikes out of the water. That said, there aren’t many of us that actually need a bike that’s capable of winning an Enduro World Series race. I count myself among that camp, as my trail bike is overkill for 85% of the riding I do. Sure, it’s a blast on the downs, but it’s not going to win any hill climbs.

One of the things that makes those bikes so fun is their geometry: slack head tubes, long front centers, low bottom brackets, and short chain stays. Thankfully, many companies are now taking that geo and applying it to shorter travel bikes to create bikes that are confident on descents without feeling like you’re pedaling a Cadillac. To that end, Norco announced a new line of bikes at this year’s Sea Otter Classic. Norco claims their new bike–called Optic–“is a fast-pedaling trail bike that rides with just the right mix of cross country efficiency and all mountain playfulness.”

You want options? You got ’em! Norco is offering the Optic with either 27.5″ or 29″ wheels. You can also choose between a carbon frame with three different build options, or two builds on an aluminum frame. For those adding it up, that’s 10 new bikes! The 29 is offered in sizes from small to extra large while the 27.5 adds an extra small option to the mix. Prices for the Optic start at $2,600 for an aluminum frame and top out at $7,200 for the top-spec carbon bike.

Depending on which build you choose, the components will be the same between wheel sizes. However, there are numerous tweaks between the 27.5″ and 29″ to make them fit and handle identical to one another. This means travel is different with 130/120mm (front/rear) on the 27.5 and 120/110mm for the 29. It doesn’t end there, though, as there are different head tube angles, head tube lengths, and stem lengths, just to name a few.

As a disclaimer, the trails at the venue are buff enough to ride a ‘cross bike on, for real. So it’s not the best place to test big hit performance or technical ability, but it’s enough to give an idea of how the bike pedals, handles, and climbs.

I started out on the 7.2 and Jeff was on the 9.2. Both builds use the same Fox suspension–a 34 Float fork and Float DPS EVOL shock. Other build highlights are a Shimano XT 1×11 drivetrain and brakes, Race Face Turbine cranks, and Easton AR 24 wheels.

The bike pedaled well. Even with the shock in the open position and the tame trails, there wasn’t much bobbing going on. The Optic felt zippy, nimble, and had no troubles scooting up the climbs. 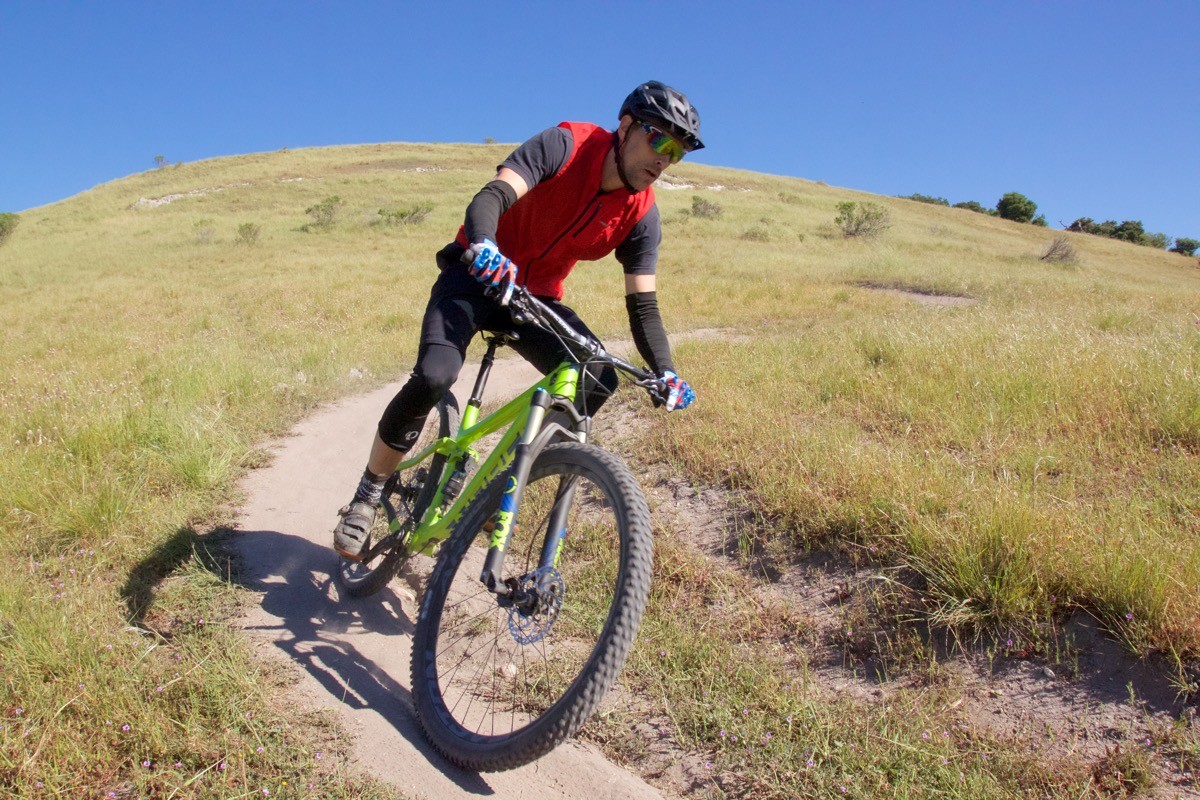 Halfway through the loop, Jeff and I swapped bikes. It was a quick swap with just a change in seat height and an exchange of pedals. Now I was on the 29 and Jeff was on the 27.5. All those little tweaks truly made the bikes feel identical. Within the first few pedal strokes, both us were remarking on how similar the fit was between the two. With that quick of a change I could focus on the differences solely between the wheel sizes. As much as I hate to trot out this old line, it’s true. The 29er rolls better and carries its momentum, and the 27.5 is snappier and quicker to get up to speed.

Jeff: I totally agree with Aaron that the two bikes fit almost identically. Both of my personal bikes are 29ers so I assumed I would have a preference for the 29er, but honestly it was pretty close to a toss up for me, as both Optic versions were excellent. This test ride really did bring into focus the slight differences in handling between 29 and 27.5 wheels. On this ride I personally didn’t notice the acceleration and momentum thing as much as I did the handling–the 27.5 bike just felt slightly snappier and more maneuverable. 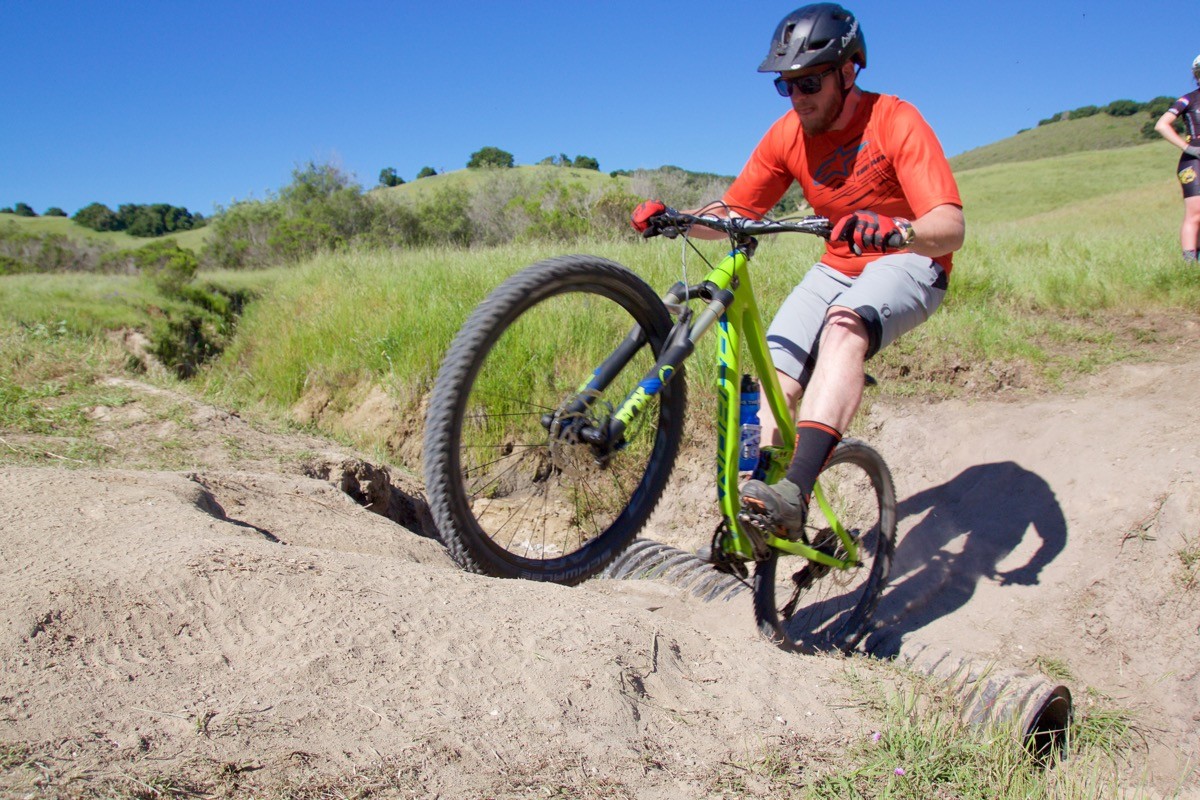 It’s good to have options, and the Optic has them in spades. You get to choose your wheel size, frame material, and a build that suits your budget. Which one would we choose? Based on our extremely limited experience with the Optic, both of us would go with the 29er. For me (Aaron), that choice is based solely on my terrain and riding style, though. Many of the big backcountry loops I like to do have large stretches of gravel to connect singletrack. For all-day rides you can’t beat a 29er for eating up the less fun miles in between trails. If you want something slightly sharper for popping around the trail, check out the 27.5. Or better yet, try them both before you decide!

Progression
Sizing Up or Down Plus Handlebar Widths and Crankarm Lengths:...
Gear
Never Underestimate the Power of a Good Zip-tie
Gear
These MTB Deals are Fire, including 40% off Patagonia Dirt...
Gear
The Maxxis Minion DHF Tire is Still the One to...
Subscribe
Login
Please login to comment
6 Comments
Most Voted
Newest Oldest
Inline Feedbacks
View all comments

Nice, I thoroughly enjoyed this review and the side-by-side comparison. Regarding the wheel sizes, I think the takeaway is that both wheel sizes are great, but that they just offer something slightly different in performance. So enough of this, “my wheels are better than yours” debate 🙂

Very interesting to see Norco take this approach with tailoring the bike specs and design to the wheels, and launching both wheel sizes in the same platform. I don’t think we’ve seen any other brands do this. The closest that I can think of is Trek, but they match the wheel size to the height of the rider/size of the frame. So 27.5″ wheels for smalls and mediums, 29ers for mediums on up.

Which brings up a question: you said that the XS was only available in carbon. Did Norco do an XS in carbon for both the 27.5 AND the 29er?

The XS 27.5 can be had in either carbon or aluminum though.

Ahhh, I totally mis-read that 🙂

How do you think this bike would do for endurance racing…50 mile/6 hour events etc.? Pedal well enough? Not looking to win anything, just competing against me…

I could see myself riding the 29er version for 50 miles. You’ll have plenty of fun on it and won’t be cursing yourself on the climbs.

Hey bwfoster, I think the 29er in particular would make an excellent marathon bike. The pedaling is excellent, even with the shock open. And with the shock in the middle or firm settings, the bike is even more efficient. Each setting has a unique and distinct feel.