At Interbike last week I got a chance to try the Rohloff internally geared hub, called the Speedhub, for the first time, and it was an interesting experience. The test rig I rode was a Ventana Wolfram with a gorgeous sparkling orange finish and a swoopy frame–but this isn’t a review of the bike. Instead, I want to share my real-world, albeit brief, experience with a Rohloff hub on the trail.

For my test ride, the bike was set up with a Gates Carbon Drive mated up to the Rohloff hub in the rear. The Rohloff is controlled with a grip-shift style shifter, which allows the rider to select between 14 different gears. The overall gear ratio notches just over 500%, which is slightly higher than you get from SRAM’s new Eagle 12-speed drivetrain.

Among the benefits of an internally geared hub are ease of use (just one shifter for 14 gears) and a wide gear range. The whole system is enclosed as well, which virtually eliminates any sort of maintenance beyond an oil change every 5,000km. For those who want to take advantage of the Gates Carbon Drive, the Rohloff allows you to do so without having to go single speed.

Before my ride I received a lot of instruction on how to shift the Rohloff, since the technique is not the same as it is with a traditional derailleur. The key is to stop pedaling, click the shifter, then resume pedaling. This might sound awkward at first–and it is–but the upside is you can shift as many gears as you like, all at once, up or down, without jamming the gears. Mountain bikers can especially benefit from this, particularly in transitions from descending to climbing. With the Rohloff, you can shift in anticipation of a climb, while keeping your pedals planted in attack position all the way through the bottom of the descent. 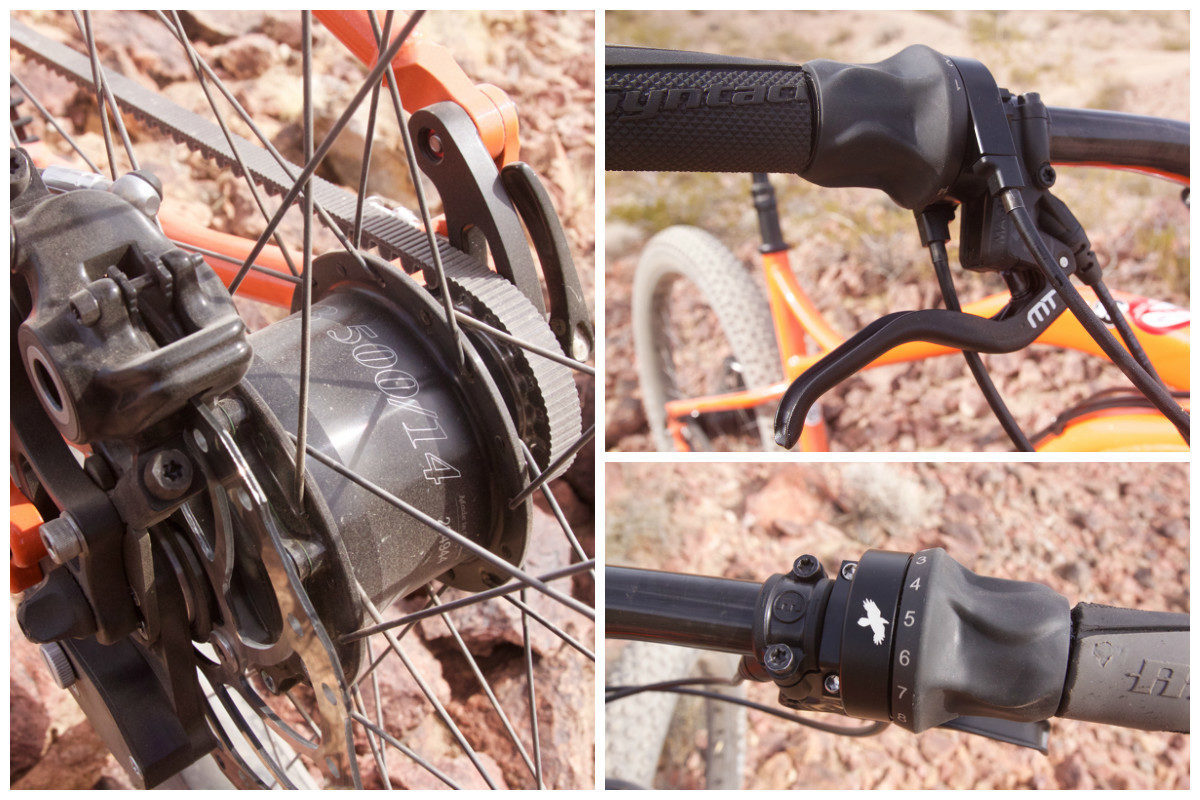 Trying to shift while pedaling the Rohloff can occasionally cause the gears to get jammed. This happened once during my test ride, but the fix is simple: stop pedaling, twist the shifter up or down, and resume pedaling. Problem solved.

Perhaps one of the biggest drawbacks to the Rohloff internally geared hub is the weight. Because the system is chock full of gears packed in oil, it’s heavy with a capital H, so much so that when I attempted to speed hop obstacles on the trail, I barely got the back end off the ground. I suppose one might get used to the added weight, but it definitely had me feeling off balance during the entire ride.

Another interesting thing to note is that the Rohloff system requires two shifter cables: one to go up, another to go down. The grip shifter I used in my test routes both cables from the same shifter but it’s also possible to run split trigger shifters on the left and right side of the bars. For instance, the shifter on the left might shift up, while the shifter on the right would shift down. This sounds complicated to me so if I were to install a Rohloff, I’d probably stick to the grip shifter. It seems like it should be possible to run a more traditional single hand, split shifter too, though I haven’t been able to find evidence of one.

At the end of my test ride, I came away impressed with how smoothly the Rohloff shifted, and I was absolutely sold on the idea of a low maintenance drivetrain. However, the added rear hub weight and the awkward shifter choices left me a little less enthusiastic. Still, this is an interesting concept that I can easily see catching on once those issues are worked out!

I guess the wheel didn’t feel significantly heavier when climbing (since the weight is not on the outside of the wheel)? Did you feel it being heavier to get going or climb vs a more traditional 27.5 wheel?

I thought one of the benefits of internal gearing is that you can shift under load! Dang. And the biggest issue with hub based gears like the Rohloff and Nuvinci I thought was that they might not be durable enough for trail riding. Also, with such a heavy hub, would the wheel last? I would assume the spokes would take a lot more strain and there is a bigger chance of rim damage (which might require higher rear tire pressure causing possible traction issues). I would love to go this route since you don’t have to deal with worn out parts (chain, cassette and chain ring) or breakage as much (rear derailleurs and hangers). Off course the cost of building a custom wheelset with a hub like this might be a bit much too.

You’re right, I didn’t really notice the heaviness of the rear wheel when climbing or accelerating since the weight is concentrated at the hub. It was only when I tried to lift the rear end that it was really noticeable.

Durability should be a plus for a Rohloff, especially in muddy or dusty conditions. No more chain suck, grinding grit, etc.

I think the reason you wouldn’t be able to use a standard shifter is that the cable has to pull both ways, shifting up or down. With a standard shifter, one trigger pulls the cable while the other trigger releases it. To have a single shifter that would work, both triggers would need to pull the cable.