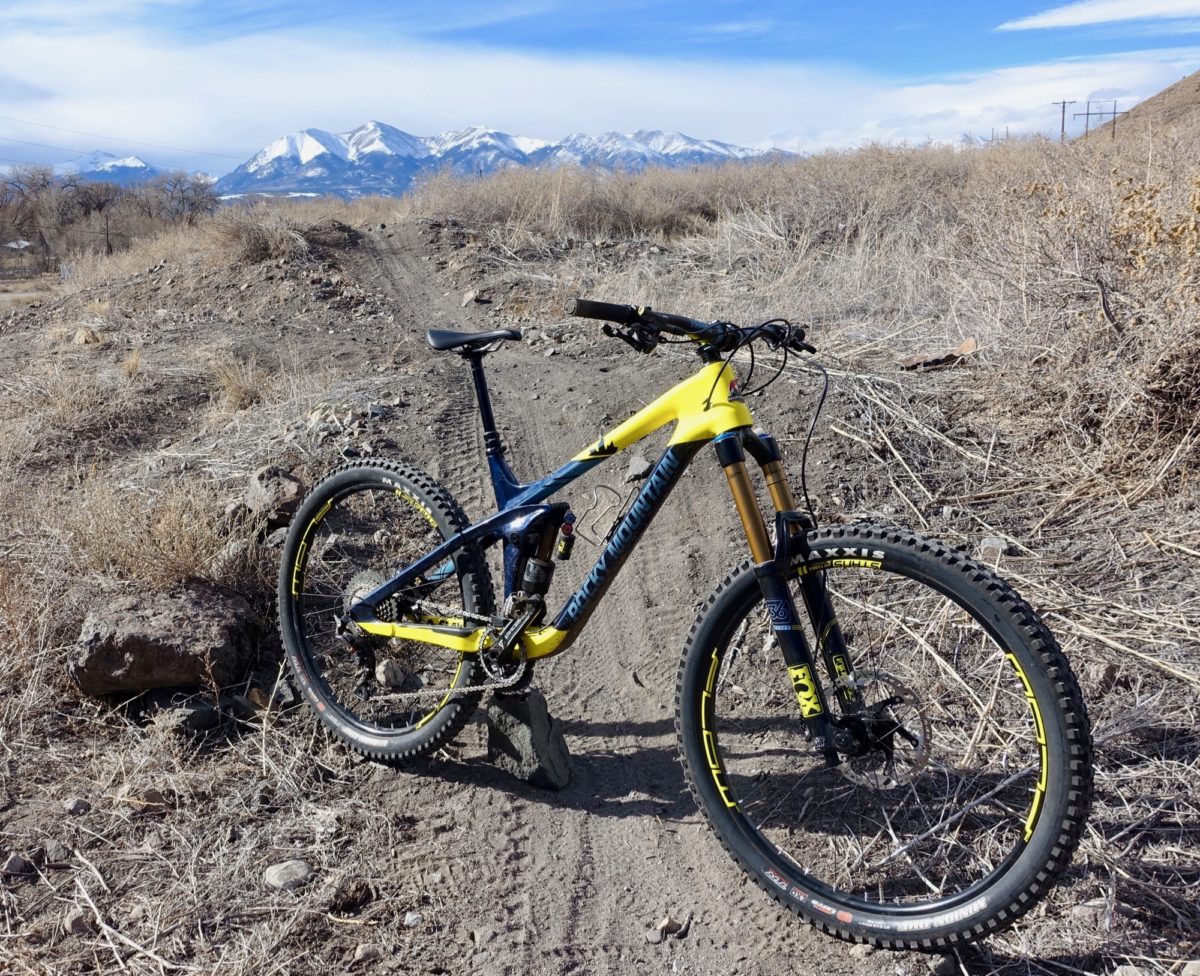 Rocky Mountain announced the new-and-improved version of their venerable Slayer in late 2016. The latest rendition features everything you could want in a modern, aggressive enduro bike:

While the sleek frame lines and pleasing aesthetics could lull you into a sense of complacency, imagining the Slayer as a slender wisp of a bike, don’t be deceived: the Slayer is all burl. “All killer, no filler,” as Rocky boldly claims. An absolute destroyer of trails and conquerer of mountains.

At first, thinking about climbing aboard the Slayer seems like folly. Yet, Rocky Mountain touts this model as offering “pedaling responsiveness.” Rocky “also increased the anti-squat values to make sure the bike pedals efficiently—whether you’re sprinting for a transfer stage or grinding toward a backcountry descent,” according to their website. Consequently, here’s my take on how the Slayer climbs.

The Slayer shipped in the low and slack geometry setting and in that stock setting, I found the front end to be difficult to control on the climbs. With a 64.75-degree head tube angle and a long 170mm fork, this in’t surprising in the least.

However, what honestly did surprise me was how much difference flipping the geometry chip in the rear linkage made. Flipping the chip steepens the head tube angle to 65.85 degrees–a 1.1-degree increase–and that degree, coupled with a slightly-shorter wheelbase (4mm less, to 1181mm in a size medium), made a world of difference in how well the front end tracked on the ascents!

One boon to the Slayer’s climbing prowess is the Shimano XTR drivetrain featuring a 32T chain ring on the RaceFace Turbine Cinch crank mated to an 11-46T rear cassette. The 32×46 gear proved to be quite capable for powering up steep, punchy climbs, and grinding up long fire roads. After spending a significant amount of time on Shimano’s 1x system with a 46T granny, I can never be satisfied with SRAM’s 42T granny ever again.

While changing the flip chip made a world of difference on how the front end tracked, in my experience, “sprinting toward a transfer stage or grinding toward a backcountry descent” didn’t happen efficiently aboard the Slayer. Rather, the rear end of the bike was very active even during seated climbing, and bobbed significantly during out-of-the-saddle efforts. 165mm of rear wheel travel is tough to tame, and I found it to suck a lot of my forward momentum.

This problem could easily be remedied with a climb switch, but unfortunately, neither the Fox Float X2 EVOL Factory shock or the Fox 36 Float RC2 Factory fork specced on the Slayer feature compression adjustment. But Fox and RockShox both offer similar suspension components with superb lockout capabilities that would have tamed the rear end bob in a heartbeat. Many other bikes in this same 170mm category offer lockouts, such as Pivot’s Firebird and YT’s Capra.

To understand their perspective, I reached out to Rocky for comment. Kenneth Perras, Rocky Mountain Product Manager, responded:

“Regarding the climb switch on the Slayer 790 model, we felt the bike climbed well enough without including it as part of the OEM spec. . . .Regarding the fork, I chose the RC2 version of the Fox 36 as the best match to the Float X2 in the back. The suspension package as a whole is meant to offer the best descending performance money can buy. The FIT damper on the fork along with the highly adjustable Float X2 shock offers just a touch more support through the rough stuff that the Slayer is intended to be ridden through. This is not a slight on the FIT4 damper or the Float X, both with the 3 distinct trail settings, but rather creating a balanced ride front to back.”

The key is the sentence, “the suspension package as a whole is meant to offer the best descending performance money can buy.” Despite references in the marketing materials to climbing proficiency, the Slayer is all about going downhill, and would way rather prefer to be thrown in the back of a shuttle pickup than pedaled up the mountain.

For example, watch this promo video for the Slayer:

Return to the Rockies from Rocky Mountain Bicycles on Vimeo.

Did you see a lick of climbing in that video? I didn’t think so.

The Slayer is designed to slaughter descents, dominating everything from technical gnarfests to massive gap jumps, and everything in between. I had an absolute riot blasting down waterfalls of rock with reckless abandon!

Everything about this bike is built around descending, from the 170mm fork and 165mm of rear travel to the slack 64.75-degree head tube angle, to the burly parts build kit. Above and beyond the descending-optimized suspension discussed above, the Slayer sports a Rocky Mountain Micro Guide / e*Thirteen bash guard in place of a front derailleur, and Shimano’s Saint DH brakes with 203/180mm Ice-Tec rotors. Rounding out the package are Stan’s ZTR Flow rims measuring 29mm wide internally mated to Maxxis Minion DHF 27.5×2.5″ Wide Trail tires for supreme confidence and control.

My test period for the Slayer was over the winter in Colorado, which meant that the long, extended alpine descents were off limits. However, our dry, rocky, desert playgrounds offered plenty of technical challenge to point the Slayer toward.

If any bike can be considered point-and-shoot, the Slayer qualifies. The confident suspension, rigidity of the Fox 36 fork, and beef and burl of the Minion Wide Trail tires plowed through rock gardens, obstacles, and wheel-sucking lines with nary a concern.

Launching the Slayer off jumps and drops was absurdly, embarrassingly easy. Kenneth Perras’s selection of the RC2 36 and the Float X2 performed magnificently! Returning to earth felt more like landing on a pillow than smacking down onto hard dirt, with the stock out-of-the-box rebound and associated settings providing a perfectly-controlled landing, ready for the next obstacle.

Aside from setting sag, I made no adjustments to the stock settings on the suspension components, and felt no need to do so. But of course, these high-end components offer plenty of adjustment, so if you want to tune the fork and shock differently for your personal needs, those options are available to you.

I spent most of my test in the low and slack geometry mode, as discussed above, which I found to provide plenty of confidence when blasting straight line through rock gardens and wide-open sections of descents. However, when I made the switch to the steeper geometry setting, I didn’t find it to have a massively negative impact on the downhill handling. In fact, I found it to quicken the steering and provide better maneuverability in tight sections.

Due to the timing of my test I spent more time on tighter technical sections than I did on wide-open, high speed descents. Instead of skimming through rock gardens at 30mph and soaring off ledge drops at speed, I spent more time snaking through rocky switchbacks, rolling steep slickrock slabs, and wheelie-dropping off ledges. In the tighter, slow speed situations I found the steeper geometry provides more responsive handling.

That said, for high speed alpine descents with long sight lines and straighter trails, the slacker mode would offer more stability and confidence. Again, this is the beauty of the Slayer, and the adjustability that Rocky Mountain builds into all their full suspension bikes: the ability to tweak the bike to optimize it for your riding style, your current terrain, and how you want the bike to respond.

Overall we’re beginning to see more and more mountain bike brands offering flip chip technology in their suspension linkages to accomplish similar feats, but it’s still not widespread. If any brand gets the kudos for making a concerted push to provide adjustable geometry, that brand is Rocky Mountain.

What are the upper limits of the Slayer’s capability? Where does it hit a ceiling?

Partway through my test I found out that my recently-repaired ACL isn’t working, so I decided to quit a few types of high-impact trail obstacles, like big drops and jumps. But in Arkansas, I lent the Slayer to a friend, and he proceeded to send ladder drops bigger than anything he’s ever attempted before, landing effortlessly every single time.

Personally, the Slayer is the kind of bike that I would love to ride in a DH bike park. I spend so much time riding trail and enduro bikes that the weight of a dual crown fork and the length of most DH sleds takes me a while to acclimate to on the 2 or 3 days a year when I ride chairlifts. The Slayer, on the other hand, immediately felt balanced and natural, yet it’s so burly and so confident that there is nothing in a bike park that I would hesitate to ride on the Slayer… that I wouldn’t also hesitate to ride on any other bike.

The Slayer knows no limits.

If I had my way, I’d personally love to see the Slayer specced with a climb switch on both the rear shock and the fork. While I cannot deny the plushness and near perfection of the suspension components chosen, after riding climb switch-enabled Fox suspension on Pivot’s Firebird, I also can’t say that I personally noticed massive losses in the descending performance

Aside from that one point of preference, the Slayer was hands-down one of the most aggressive, most confidence-inspiring, and downright fun mountain bikes for tackling the gnarliest of trails that I’ve ever ridden. From shuttle laps, to hoofing it up to the top of black diamond descents the hard way, to chairlift runs in the bike park, the Slayer can kill it all.

The cherry on top? This brutal trail destroyer weighed in at 29.1lbs (without pedals). That, my friends, is an accomplishment.

Thanks to Rocky Mountain for providing the Slayer 790 MSL for review.