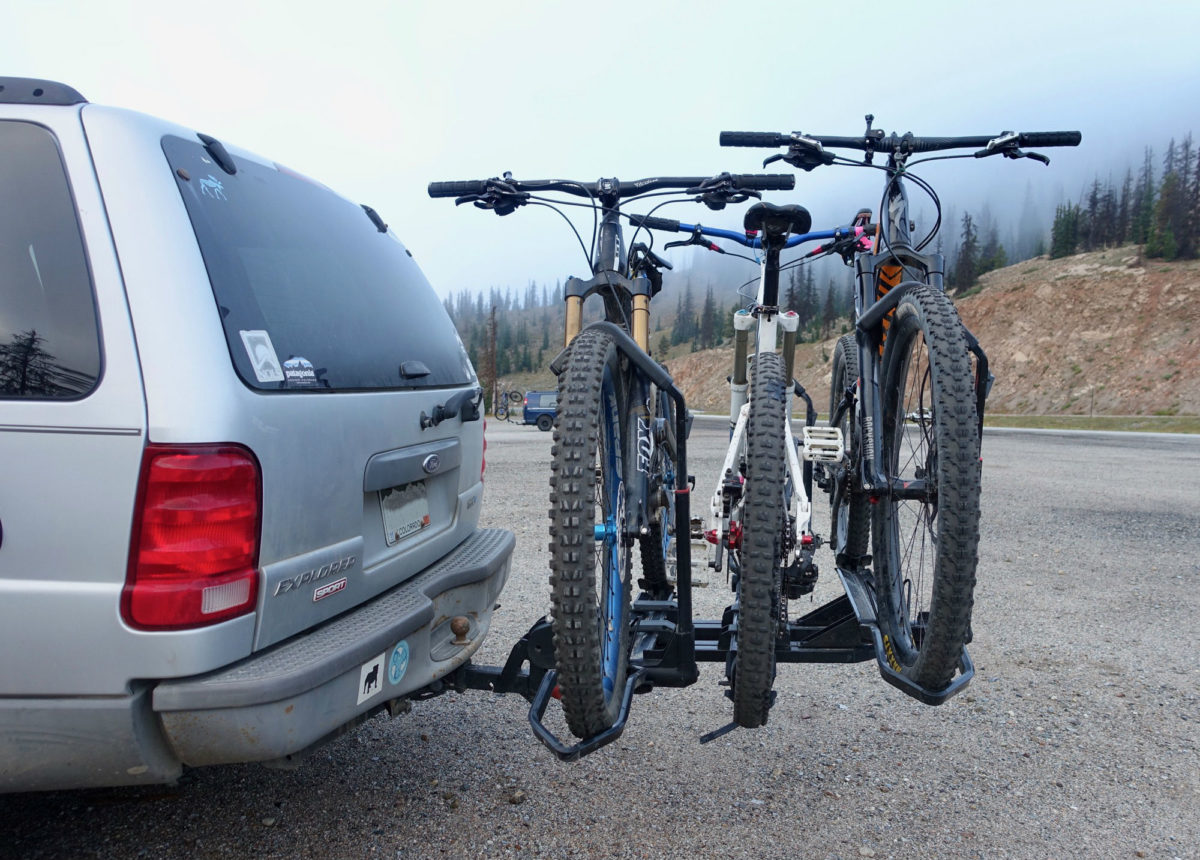 The basic requirements for a mountain bike rack mandate that the bike stays on the rack and doesn’t fly off while speeding down the highway. By this point most racks have figured out how to not lose the bikes on the interstate–but the next most important requirement is protecting the bikes during that high-speed transit. One of the major ways that mountain bikes get damaged on a rack is from bike-on-bike contact, the rubbing of the frame or components against one another bike due to road vibrations.

Yakima’s Dr.Tray rack features a unique sliding tray design that should resolve this issue once and for all.

While I’ll dive deep into the pertinent tech specs in my analysis below, here are the spark notes from Yakima:

Out on the Road

I used the Dr.Tray hitch rack for countless bike trips, including “off-road” 4×4 shuttles where Yakima claims the Dr.Tray should not venture. But the main test piece was a 2,500-mile road trip from Colorado to Fernie, British Columbia and back–a literal cross-country trek–with two bikes loaded on the rack. After installing the EZ+1, I hauled three bikes on the rack during multiple shuttles up big mountain passes in Colorado–both paved and dirt.

When I first saw the Yakima Dr.Tray hitch rack at Interbike 2016, I thought to myself, “finally! Somebody has created a way to keep bikes from bashing into each other while on a hitch rack!” While I was most focused on the innovative design that allows you to slide the trays from side-to-side to keep the bikes from hitting, what I failed to note at the show was just how far apart the rack keeps the bikes–18 inches, according to Yakima.

The substantial distance between the bikes–radically more than the Kuat rack I tested, for instance–meant that with just two bikes I had no need to even use the sliding tray design. Rather, with the trays at either end of the rack, the bikes are spread so far apart that I’ve had no bike-on-bike issues, even with the saddles on the bikes all the way up and wide handlebars installed.

With just two bikes the side-to-side adjustment is really a “just in case” feature. Just in case you happen to have an issue despite the bikes being a mile apart, you can slide them side-to-side as well.

While the adjustment seemed superfluous initially, once I considered adding the EZ+1 additional tray so I could haul a third bike, the adjustment came into play much more frequently.

Here’s a short video showing my first attempt at installing three bikes on this rack, to show just how quick and easy it is to adjust:

While I didn’t need to use the side-to-side adjustment on this first load of three bikes, it has since been required to eliminate bike-on-bike contact, especially for bikes with fixed seatposts.

I found the full-fat compatibility, right out of the box, with no extender straps required, to be an excellent touch. The front clamp works perfectly on a fat bike, and while the rear ratchet strap is just barely long enough to get around the Schwalbe Jumbo Jims on my fatty, it makes it.

The built-in cable locks, while definitely not burly enough to turn away a determined thief, are more than adequate to protect against casual passersby. While returning the cables to the housing can be a bit of a chore, the part I most appreciate is that they’re easy to pull out, thread through the bike frame, and lock into place–no key required to get the lock locked.

Issues that Have Already Been Fixed

I ran into a few issues that, I found out at Interbike 2017, have already been fixed on the 2018 model of this rack. On my 2017 model, the button for the main front wheel clamp can be difficult to work, since you need to push down hard while simultaneously pulling up on the clamp. The new button on the 2018 model works like a charm.

The spring tension on the pull lever to raise and lower the entire rack was very stiff. “We got a lot of feedback initially that it was a little too hard, especially for the ladies to pull, and that it was a little awkward,” said a company rep. This is also fixed for 2018, but I did find a trick to make the action on the lever easier on the 2017 model, in case you already own this rack. When the rack is down and in the bike carry position, begin pulling on the gray handle and lift up slightly on the rack at the same time. This makes it easier for the mechanism to disengage, allowing you to raise the rack out of the way easily.

I also noticed that some bikes would shift in transport–not coming out of the rack, but rocking back and forth in the cradle. To eliminate this, Yakima has made the trays themselves three inches longer and has also changed the shape of the wire form on the front tire cradle so that it more easily contacts the front tire on smaller-diameter wheels.

While it was great to hear Yakima that Yakima has already addressed my major concerns with this rack, taking all the feedback that they’ve heard to heart, I have two other complaints to lodge.

The rack’s mechanisms are susceptible to grime and grit from the road. One of the final times that I tried to use the back-and-forth slide mechanism before penning this review I found that too much dirt had built up around the trays, making it impossible to slide the tray. Spraying it down with a hose and also loosening a couple of the hex key bolts on the tensioners would undoubtedly be an easy solution, but if you routinely drive dirt roads, be aware that grime buildup could be an issue.

Yakima proudly claims that the Dr.Tray is the lightest rack in its class. But is this a good thing?

The light weight does make for easy installation. I suppose some mountain bikers ride so infrequently that they install/uninstall their rack every time they drive to the trail but my hitch racks, on the other hand, live on my vehicles. The only time my rack comes off is when I’m heading out for a dedicated 4×4 drive on technical terrain and I need maximum ground clearance. The other 360 days of the year, it lives on the back of my SUV.

This means light weight isn’t really a benefit, and in the case of the Dr.Tray specifically, I found it to be a detriment. While I didn’t lose any bikes on the highway, the bikes would sway and bounce substantially more on the Dr.Tray than on my Kuat NV 2.0. When it comes time to ratchet down the front tire clamp, it can be difficult to push down and get a tight enough clamp, especially on a high-volume tire, since the rack gives so much.

The lack of stability of the rack’s base also made adjusting the trays side-to-side quite difficult. Instead of just pulling the tray and having the base rack stay firm, the rack would pull and flex. See the animated GIF above for a visual.

The unique tray adjustment mechanism and the substantial distance between the bikes are both key ingredients that allow Yakima’s Dr.Tray hitch rack to be the premiere rack for eliminating bike-on-bike contact while driving to the trailhead.

I was glad to hear from Yakima that they’ve taken feedback to heart and modified the rack for 2018. Hopefully, they’ll also act on my feedback: make the base rack sturdier. I’d take another 20 pounds (or 30 or 50, it makes no difference) of weight in the rack body itself if it would provide a more stable, confidence-inspiring ride. A more stable rack base would also make it easier to adjust the trays–the key selling point of the Dr.Tray.

Still, even in its present form, the Dr.Tray is a premium hitch rack with innovative features that you can’t find anywhere else. If you often have issues with your bikes hitting each other–for instance, if you don’t have dropper posts on your bikes–the Dr.Tray could be the perfect solution.

This premium hitch rack does come at a premium price: $579 MSRP for the base Dr.Tray rack with two trays, and another $229 (MSRP) for the EZ+1 add-on. Available at Backcountry and other retailers.

Thanks to Yakima for providing the Dr.Tray for review.

1UP USA rack is still the one to beat, in my opinion. Modular design makes it light to install in pieces and easy to grow with. Its stable, and you can shift the bikes back and forth on the rail by simply rolling the bike, and its easy to find a position where bikes installed next to each other do not touch.
My wife was upset with me when I purchased our first 1UP rack, since we already owned a perfectly functional rack from a known brand. One time installing the rack and putting her bike in it, and the old rack was up for sale on ebay. Now we both have 1UPs that live on our cars permanently. All aluminum means they don’t rust, and the aesthetic is awesome.

I’ve got a different take on the weight point.

I run a rack on a small light FWD car. 20 or 30 extra pounds hung on the end of a long lever off the back of the car can make a huge difference in how my car squats in the rear as I go down the road.

At night, with my headlights on, this is important.

On a different note, I find it kind of funny that the 1.25″ rack is significanlty heavier than the bigger one.