What do you do if you have to haul a bunch of bikes, but have no room for them in your vehicle? 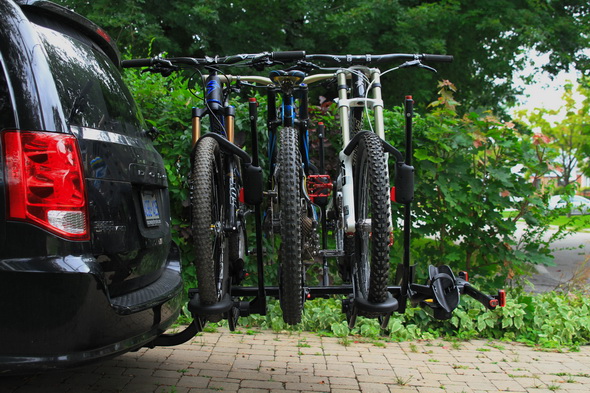 Since many (but not all) people drive some sort of CUV or other type of vehicle that has a 2in receiver installed, the Yakima HoldUp and HoldUp+ combo is the perfect solution! On my Grand Caravan, I have installed a 2in receiver for bike racks just like the HoldUp. When heading to Blue Mountain with family, coolers, food, clothing, and everything but the kitchen sink in tow, even a vehicle like the Caravan fills quickly. Well, the HolpUp and HoldUp+ combo really helps. Now all the bikes can be transported safely as well. 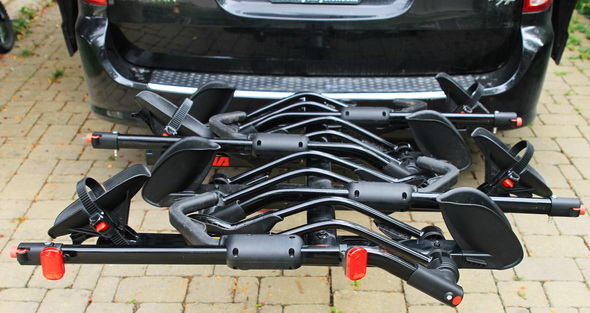 The new HoldUp and HoldUp+ both feature “side to side adjustability that reduces bike to bike interference,” according to Yakima. Simply loosen the four allen keys on each rack and slide the station to the best position each bike, then lock them down. The bike’s finish is never touched.

According to Yakima, the “StrongArm™ design enables you to load your bike quickly, whether it’s a 20” wheel or a 29er.” Just hoop over your wheel and butt up the arm to the front fork, and you’re good up front. In the back, just strap down the wheel. It literally takes seconds per bike. All told, there’s zero contact with the bike frame. The HoldUp can accommodate carbon road bikes as well as disc brakes, thru axles, and full suspension bikes, meaning this rack is the perfect solution no matter how diverse your quiver of bicycles! 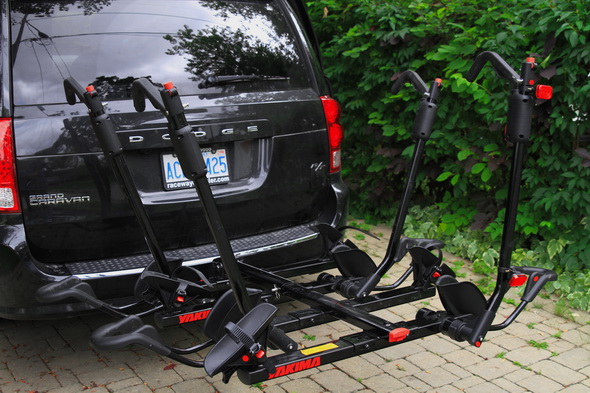 When the rack is installed and you need to get into the back of the car, the Holdup tilts down (even with the bikes loaded) for access to the rear of the vehicle. The bike trays fold up when not in use.

At the very end of the rack, if you pay close attention, the most important feature can be found: 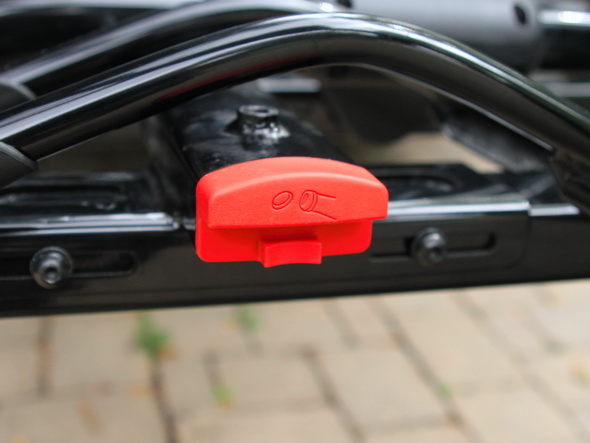 An integrated bottle opener! Yesss, they get us! Yakima totally gets it. Not only does a bottle opener come standard, but the rack also features fully-integrated locks, which are a great addition for those times when you have to leave your vehicle unattended. 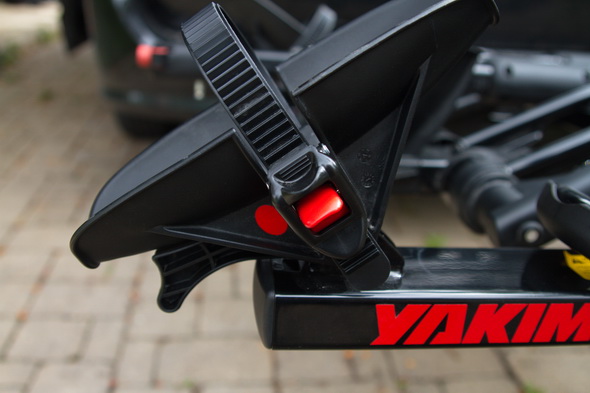 Purchase of a HoldUp includes all tools and safety gear necessary for installation. You also get a second set of tools and extra gear with the HoldUp+. With the HoldUp+, a flag and extra blinking lights are supplied for safety.

This bike rack may be the most solid unit I’ve ever used, though it’s second to the Kuat in sexiness. Painted in gloss black with red Yakima decals, the HoldUp matches the Caravan perfectly. Once assembled and installed, the HoldUp can easily convert to two-bike or four-bike configurations.

I will warn all of you now: make sure your vehicle is rated for a rack such as this. If it’s not, you could experience issues with the load on your hitch.

On the road, the rack shines as it firmly holds all the bikes in place without swaying around. With a vehicle like an SUV, CUV, or minivan, you have enough vehicle weight that the rack is almost not noticeable when navigating through traffic. 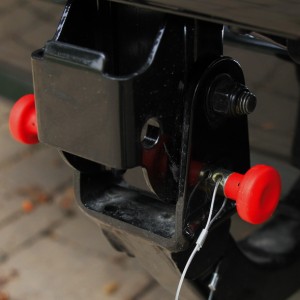 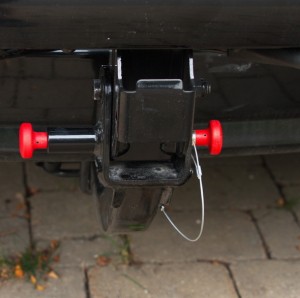 The best way to use the HoldUp and HoldUp+ is to firstly install the HoldUp alone, then with it in the vertical position install the HoldUp+. It is easier and more manageable to do it this way rather than trying to fit the completely-assembled system into your receiver.

When in the down (bike on) position, this rack is heavy! I personally had no problems getting to the release but my wife, on the other hand, had some issues. Getting to the release and lifting up the rack can be a problem for a shorter person. I recommend the aid of a second person if this is the case. Getting into the back of most vehicles should be easy when releasing the pin the second time (from the bike on position), which allows the rack to tilt down. There should be sufficient room to access the back of the trunk, unless your doors swing sideways or it’s a full bottom-opening trunk. Then you would need to remove the closest bike to the back. 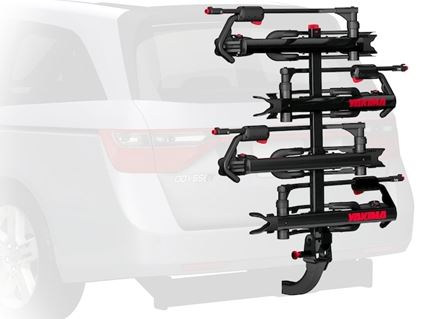 I do have one warning: when using a rack like this on a vehicle that has a remote control that opens the tailgate, be very careful not to attempt to open the trunk with the rack in place. You will damage your trunk, and probably your bike. (**Not that I did this, but it may happen.)

For $439 US for the HoldUp and an additional $329 US for the HoldUp+, you’re getting a premium, no holds barred, non-marring rack for your entire fleet of bikes that fall between 20in and 29in wheel diameters.

A big thanks to the folks at Yakima for sending down the rack for review.

What a nice looking rack! I could totally use one of these for the back of my rig. Of course, I need to replace my hitch first 🙂

Man that is a sharp looking rack. I want one too.