A few members of the Singletracks Editorial Team recently got together in Salida for a long weekend of riding some of Colorado’s best trails. Absolute Bikes in downtown Salida provided me with a Trek Fuel EX 9.8 27.5 for the trip (thanks Absolute!).

The first thing I noticed about this particular Trek is the paint job: its carbon frame is finished in a matte highlighter yellow color. Matching decals on the fork and saddle accents complete the look. With the front and rear derailleur cables routed internally, the bike has clean lines. It’s one of those bikes that just looks fast, even sitting still. I couldn’t wait to get it out on the trails. 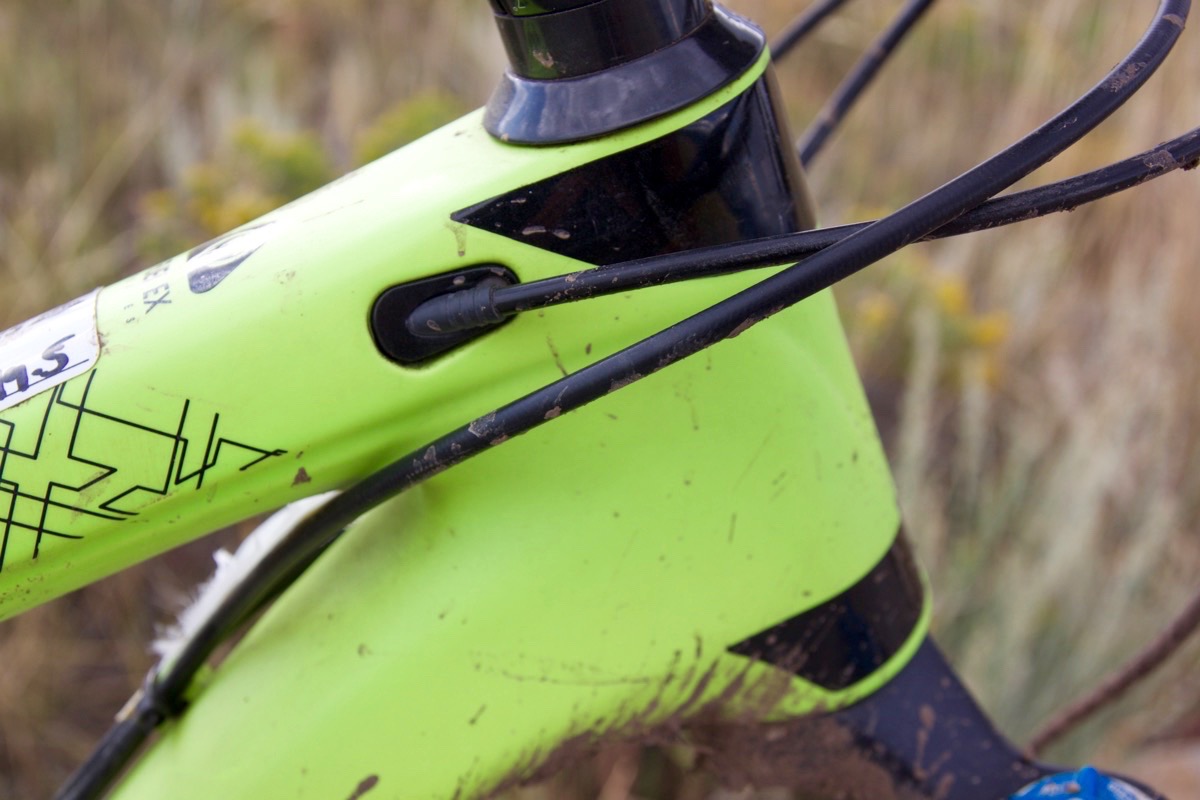 Trek’s Fuel line is their take on the do-it-all mountain bike. They offer the Fuel in build kits ranging from $2,000 to well over $8,000. With 120mm of travel front and rear, it skews towards the XC end of the trail bike spectrum. The Fuel EX 9.8 is all carbon, apart from the aluminum chain stays, and retails for $5,000. 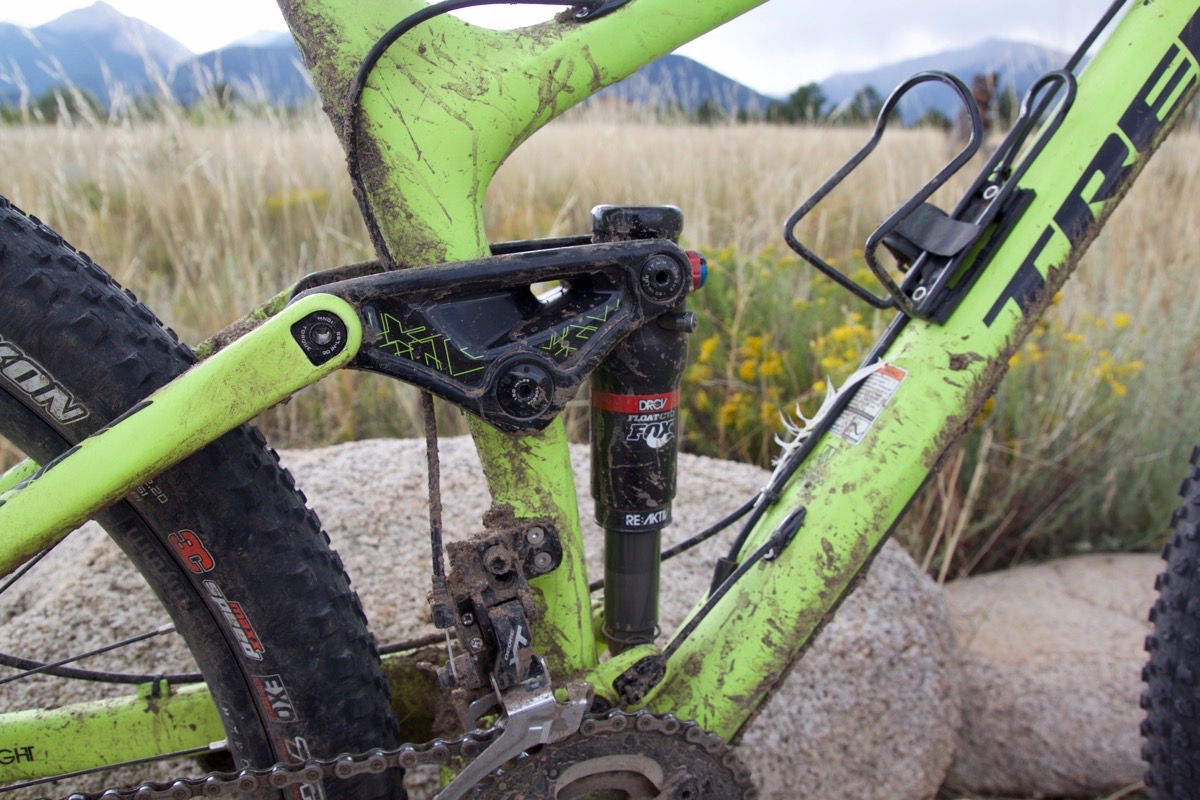 Trek spec’d Fox suspension front and rear on this bike. Up front was the near-ubiquitous Fox 32, and a proprietary Fox/Trek collaboration Float RE:aktiv shock handled things in back.

Shimano XT covered the majority of the component spec on this bike, with derailleurs (front and rear), shifters, brakes, and cranks. Trek spec’d 180mm rotors front and rear on the 9.8 bike, which was great for my Clydesdale size. I never felt like I needed more braking power. 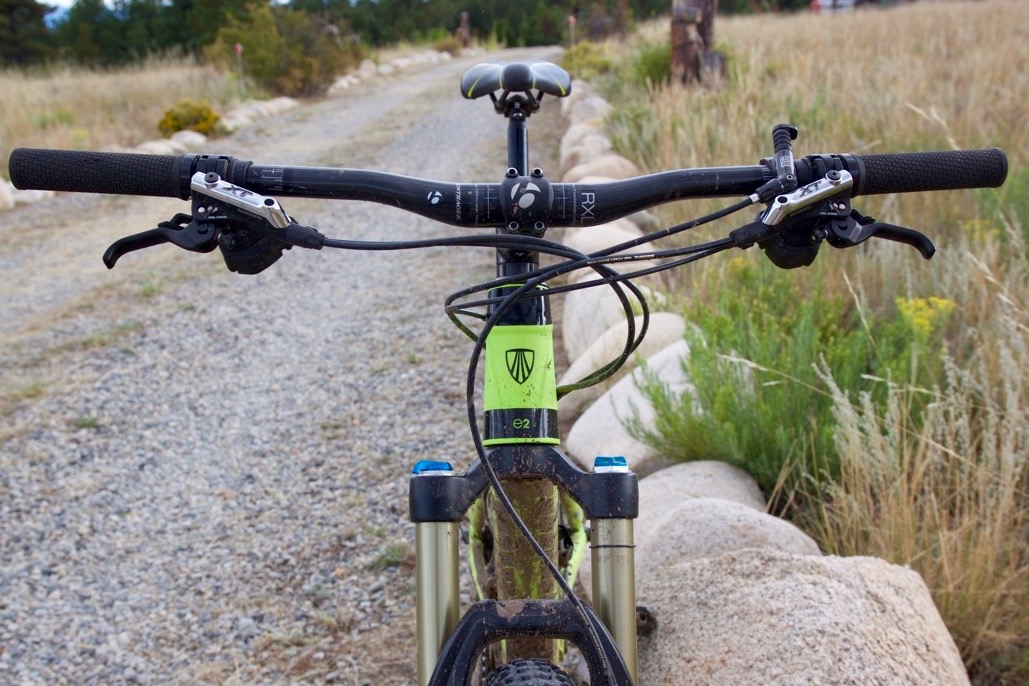 A RockShox Reverb Stealth handled post duties, and Bontrager covered the rest–wheels, saddle, bar, stem, and grips. The front tire was a Bontrager XR3 2.35 and the rear was a Maxxis Ikon 2.20 (not stock).

With Shimano trail pedals installed, the bike was right at 28 pounds for a size 19.5″. For some reason, Trek uses a “virtual sizing” that measures one inch larger than the frame’s actual size. At 6′ tall, the 19.5″ felt just a hair too small for me, and I think I would have been more comfortable on the roomier 21.5″ (20.5″ actual) size.

Spec-wise, there wasn’t much to pick on, apart from the narrow (for my tastes) handlebar.

Our first ride was on the Monarch Crest Trail to Agate Creek. Even though we started at over 11,000′ above sea level, there was still some climbing to do. From the parking lot at the top of Monarch Pass there’s a gradual four mile climb to just below 12,000′. Since the climb was relatively smooth, I kept the rear shock in “Trail” mode. The bike responded to the terrain very well, without bobbing under power.

The second day of riding on Canyon Creek featured around 3,800′ of climbing, and while it started out as a smooth gravel road, it quickly turned into a rugged 4×4 track with large, embedded rocks and smaller loose stuff everywhere. Switching the shock into the open “Descend” mode helped that little Ikon tire keep traction as long as it could.

I’ve been a big proponent of 1x drivetrains, but I’ll tell you what, if I move to Colorado, I may just go back to a 2x system. My flat-lander lungs were loving the granny gear, and having a big gear to push on the flowy stuff was great.

One issue that did come up during steep punches was a tendency for the front end to wander. When I got the bike from the shop, there were 30mm of spacers underneath the stem. Since I prefer a low handlebar, I moved two of the spacers above the stem, leaving just 10mm below. Even with that change, I really had to drop my chest low to keep the bike going where I wanted it to. I chalk some of that up to the Trek’s longish stem (80mm) and narrow bar (720mm). Why not just ship bikes with a wide 780mm bar and let people trim them as desired?

The bike’s supple rear suspension and light weight make it want to scurry up technical climbs, but it took extra concentration to rein in the front end.

When we reached the intersection with Agate Creek off the Monarch Crest Trail, it was time to open up the suspension, drop the saddle, and let it rip. Right away, I appreciated the stiff carbon frame and stout Bontrager Rhythm Comp wheels. Even the Fox 32 fork, which is not exactly known for its stiffness, felt up to the task. I could hear the dampers in both the fork and shock getting worked, particularly during small, repetitive hits, but the Fox components performed excellently.

The Stealth Reverb post was flawless, and certainly adds to the Trek’s descending capabilities. However, the remote for the post was tough to reach–a product of having a Shimano 2x drivetrain. Even with my fairly large hands, getting my thumb to the remote was a stretch. I got better at it over the next few days, but there were occasions where I couldn’t reach it in time. It’d be nice to see someone come up with a better solution for mixing the brands.

If there were any components holding the bike back, it was the tires and cockpit. The small knobs on both the Bontrager and Maxxis tires did make some of the really steep, loose sections sketchy, but anything less than mega-chunk was handled with no problems. Where the Fuel EX really excels is on flowy trails with moderately-sized obstacles. It pedals like an XC bike, but the suspension is very active. I also think a shorter stem and wider bar combo would make the Fuel an even better descender.

The Fuel EX is way more capable than its travel numbers suggest.

Some of these were mentioned above, but to summarize:

It’s easy to see why the Fuel line is Trek’s top seller. You may not be able to attack big mountain terrain with reckless abandon, but Trek has the Remedy or Slash if you’re into that. At 28 pounds, it’s a little heavy to be a dedicated XC race bike, but it rides like a much lighter bike. And if XC racing is your game, there’s no shortage of lightweight options in Trek’s line.

As far as mountain bikes go, it’s a safe choice. And I don’t mean that negatively at all. The Trek Fuel EX 9.8 has a stout frame, excellent suspension, and a (mostly) smart parts spec. It would be a great companion on any mountain bike ride.

Earl from Absolute Bikes told me that because of the Fuel’s versatility, it’s been the best-selling bike in their shop this season. In a town like Salida, where people live and breath mountain biking, that’s a solid endorsement.

Nice review, I have a 2011 Fuel EX and it has been able to take everything that I have thrown at it from Hawaii to the Rockies and everything around. Of course, there are mods, more suited to me. I just got back from a Utah/Colorado trip and it performed well. One day I may get a bike with more travel for bigger stuff, I think that I would be fine with 150mm. I enjoyed reading your review, nice photos too. Take care.