Looking at the Instinct 999 MSL on paper, the bike had a lot going for it, but specific to my riding style and preferences, there were some apparent drawbacks as well. The almost feather weight, top flight component spec, myriad of features (explained in detail in the On Review article), ultra stiff carbon frame and efficient but active suspension all promised a stellar ride.

However, the big hoops threatened to dampen versatility. The skinny (relatively speaking) tires gave me pause before riding in my steep, gravelly local trails which put a premium on aggressive, fat tread. Of course, I also traveled a bit with the Instinct, getting to sink its knobbies in a full variety of trail conditions. Lastly, the short cockpit (again, relatively speaking–I like a looooong top tube) was sure to dampen my enthusiasm. Enough preliminaries; so how did it ride in the real world?

Newton Would Be Proud

Almost all bikes feel nice on buffed out singletrack, but the Instinct felt really nice when yanking and banking on the buff. The Instinct glided more like a hovercraft than a bicycle. The light weight, efficient suspension, and big wheels combined to make it ridiculously easy to get up to speed and even easier to maintain that speed. This bike seemed to take the law of conservation of momentum to a whole new level. 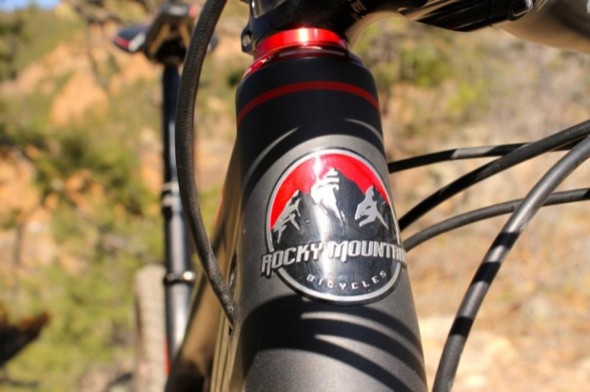 This is where the Instinct surprised me the most. This bike maneuvered far better than any 29er I’ve ridden, and as well as the 26s in my garage. It responded exceptionally well to countersteer, or more accurately, counterpressure. Just a little push against the inside handlebar while in a turn and the radius tightens up nicely. I could even enter a turn too hot, swinging an impossibly wide arc and the Instinct would allow me to recover without using the brakes and bleeding off speed. Where cornering was at a premium, I found myself not thinking, just doing. Cornering on the Instinct was truly instinctive. 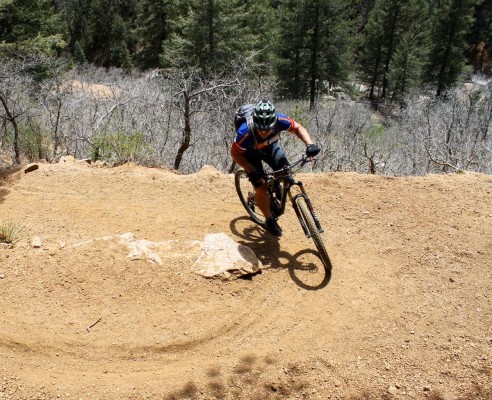 When the corners require slow speed maneuvering, a la tight switchbacks, the big wheeled bike continued to shine. The Instinct flowed around tight vees which usually cause me to tense up on my personal steed. Even the roughest ones, with sizable drops right at the crux, seemed less threatening than usual.

When the Going Gets Rough

One would expect a 29-inch-wheel mounted on 130mm of travel to roll over obstacles well, and the Instinct did just that. In fact, it did it so well, it took a bit of adjustment for me to fully exploit this capability. At first, I’d dive into the chunk and realize too late I’d come in too hot and hit the brakes, killing momentum and making for some awkward moments. Then, I realized the bike could handle it, simple as that.

Once I learned to trust the bike and let it do its thing, I could dive into the chunk without reservation and panic and come through the other side, again without loss of momentum–or composure. Again, it was good to trust one’s (Rocky Mountain) Instinct. But the Instinct isn’t a simple plow-through bike. If you prefer to finesse your way through the chunk, this flickable rig will allow you to do that as well. The bike’s versatility on this continuum was nothing short of astonishing.

It does take a little extra effort and good timing to wheelie the Instinct over obstacles. However, as soon as the front wheel clears, a basic and very gentle weight shift forward is all it takes, and the rear follows as though self-propelled.

25lbs and small change mated to an efficient suspension system makes for an excellent climber. All that discussion of gaining and maintaining momentum above applies here as well. The Instinct is amazingly easy to crank up to speed, even going uphill. The lack of a true granny gear did, on occasion, inspire this old, aerobically-challenged rider to curse under what little breath he had. What was most welcome, though, was that when I reached the top of each climb I timed, I found I had done it in about 10% less time than it usually takes me on my personal steed, which is similar in weight but sports a triple crank. It turned out neither the bike, nor I, needed that small ring.

However, the combination of short cockpit and skinny rubber did have me spinning out on some of our steep, gravelly climbs. It took a few rides for me to adjust my riding style to compensate, after which the problem almost disappeared. On the other hand, rocky, technical climbs were instinctive right from the get-go. Where traction was good, the Smoothlink suspension keeps the rear tire glued to the surface and propelled the bike up and over all obstacles.

The Instinct really picks up speed quickly when going down. Immediately upon cresting a hill, it’s as though you’re in free fall. Again, this caused me some discomfort at first, but after I got used to it, it became a favorite trait. Fortunately, the short cockpit and dropper post make it easy to get behind the Instinct when rapidly dropping vertical. On descents where I usually watch my son just pull further and further away, I was now able to keep pace and sometimes even close the gap a bit. Again, the bike’s versatility allows you to choose your style: bull through or finesse around. The frame is perfectly capable of holding the line if you trust it.

How about the Ride 9?

As noted in the On Review article, Rocky’s Ride 9 system is the most unique feature of the Instinct. In practice, it’s easy to change the geometry of the bike and get very different riding characteristics. The descending geometry did truly lend itself to descending with slacker angles and the lowest bottom bracket. However, that low bracket did find me banging cranks more than I like on technical climbs, so I only used that setting on very downhill-intensive trails.

The climbing geometry made an excellent climber an outstanding climber and didn’t surrender much on the downhill, either.

The middle setting struck an excellent balance, giving the best of both worlds. In the end, I would ride this bike about 10% of the time in the descending mode, 30% in the climbing mode, and 60% in the middle mode.

Going in, I was curious about some of the components. The first point of interest was Fox’s Kashima-coated suspension. Isn’t suspension smooth enough on its own? Well, after logging a few months on the Instinct, I can say I did notice a difference. This was easily the smoothest suspension I’ve ever thrown a leg over. Of course, part of that is Rocky’s design, but the Kashima gets some credit as well.

The suspension also carries Fox’s Climb/Trail/Descend (CTD) system. I’ve ridden a few bikes with this feature, but never has it made such a difference as on the Instinct. On most bikes, I’m happy to set the CTD in “Trail” and leave it there. However on the Instinct, the difference is so pronounced that I used it constantly, which is easy with the handlebar remote.

I noted above my impressions of the 1×11 drivetrain for climbing. I would now add that the SRAM XX1 system provided the smoothest, most flawless shifting I’ve encountered through its full range. I also took a real liking to never having to worry about shifting up front (or caring for a front derailleur).

The Avid XO brakes provided adequate stopping power with excellent modulation. The Rock Shox Reverb dropper post was not only reliable, but lightning fast. The Stans Arch EX wheelset engaged quickly and rolled as if friction-free, contributing greatly to the bike’s ability to sustain momentum. Other than the tires, there’s not one item on this bike I’d consider changing.

As amazing as this bike is, I did sustain a couple minor quibbles. First and foremost, this bike is capable of, and actually begs to be ridden, over terrain and in a style where wider rubber would be most welcome. For me, I’d gladly eat the extra weight and replace the Mountain King 2.2s with Trail King 2.4s. Also, the cockpit on the large was still a bit tight for my liking. I would have liked to try an XL as well, as I suspect I’d have been a bit more comfortable.

If you’re convinced that aggressive trail riding is strictly the province of the new crop of 27.5” wheeled bikes, I suggest you put in a few miles on the Instinct. While I’m perfectly happy hitting the trails on a 26er, I enjoyed the Instinct more than any of the 27.5s I’ve ridden so far. And this bike will be a whole lot more fun when the trail isn’t always maximum chunk.

There are two key impressions I take away from my time on the Instinct. The first is the holistic nature of the bike. With most bikes, it’s as though a frame was designed and then all the goodies are afterthoughts. With the Instinct, it feels like it was designed from the ground up with all the goodies in mind. The Ride 9 system, the CTD suspension, and all the components come together and perform as a seamless unit. It’s truly something to behold.

The second impression is of the bike’s versatility. It performs equally well on the most buffed singletrack and the most gnarly rock gardens. It climbs with ease and descends with authority. It can be ridden like a bull in a china shop or finessed like a scalpel in the hands of a brain surgeon. This bike has the widest performance envelope I’ve ever seen. I’m loathe to use clichés like “one-bike quiver” or “quiver killer,” so I’ll simply say this: I have three bikes in my garage—a hardtail, a short-travel trail bike, and a long-travel all-mountain rig—I could see the Instinct 999 replacing all of them.

Despite being competitive with similarly spec’d bikes, at a full retail of $7,599, The Instinct 999 isn’t within everyone’s reach. Luckily, Rocky makes a full line of Instincts starting with the highly-capable aluminum Instinct 930 at $2,699, which still barely reaches the 30lb mark. Also, if you like the rougher edge of the Instinct’s performance, then you should check out the Instinct BC Edition, which sports wider handlebars, wider rims and tires, and a burlier suspension while retaining the 999’s beautiful carbon frame. Weight only jumps to 29lbs while the price drops to $5,399.

Thanks again to Rocky Mountain for sharing the Instinct 999 with us for review!

I made the big mistake of test riding an Instinct 999MSL a couple of months ago and immediately fell in love with it. I ended up buying a 2013 Instinct 970 and I absolutely love the way the Instinct rides. Just like you suggest, I ride wider, more aggressive tires for trail rides but I generally ride the Mountain Kings for most of the local xc oriented trails.