L.H. Thomson has two sides of their business: contract manufacturing, mostly for the aerospace industry, and producing their own line of cycling components.  In the cycling world they are well known for their beautifully machined aluminum stems, seat posts, and seat post collars.  Thanks to the top notch quality, riders have long been asking for more Thomson products, and during my plant tour way back in April of 2011 I was told they were working on some handlebars – titanium handlebars.  They even told me I could get a set to review once they were ready and I was stoked!

Fast forward 18 months and the bars finally arrived on my doorstep.  Why did it take so long?  Because Thomson doesn’t put stuff out into the market until they are 100% certain it is ready for prime time.  But, not only did they introduce a titanium flat bar, but they also introduced a carbon flat bar, a carbon riser bar, an aluminum DH bar, a carbon CX bar, and a carbon road bar.  Some of the other Singletracks bloggers are reviewing the other bars, so keep an eye out for those reviews soon.

All the new handlebars mark a departure for Thomson.  Previously all of the company’s parts were made in the USA, however, the handlebars required work with overseas manufacturers, for several reasons.  The titanium and aluminum bars require some specialized, and expensive, machinery which the company doesn’t have.  They also require heat treating, which needs another expensive piece of equipment, and would need a separate building to house it if Thomson did it themselves (they couldn’t put it in their existing building because it’s climate controlled to maintain precision on the aerospace components they produce).

With the carbon bars there were several additional hurdles to producing in-house.  Thomson didn’t have the uber-expensive tooling for one, and it’s also not a cheap manufacturing process due to the hand labor required – it’s hard work, and requires skilled labor which is expensive.  And of course most of the expertise is in Asia anyway.  However, they do plan to bring the carbon manufacturing in house in a few years–2015 is the goal.  With the aerospace side of their business, in-house carbon manufacturing capability makes a lot of sense, but it will take some time to get there.

Titanium – The Other Metal

Thomson has two titanium bars on offer at the moment.  Both are flat, 730mm wide, use an oversized 31.8mm clamp, and have a claimed weight of 295g (mine’s actual weight was 315g).  Both carry an MSRP of $250. Yeah, there’s a little sticker shock there, we’ll talk more about that a bit later.  The difference between the bars is the sweep: one has 6o of backsweep, the other has 12o.  I stuck with the more traditional 6o sweep for my test bars.  A riser version will be available sometime this summer. 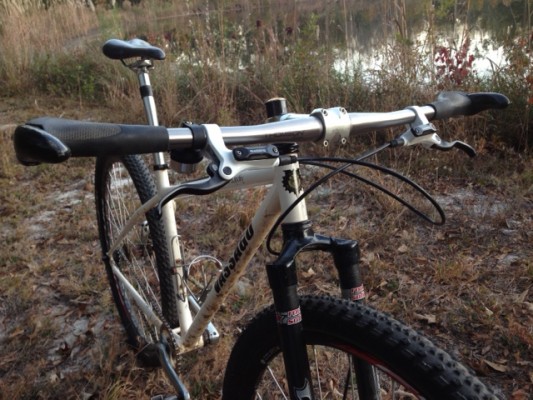 The bars can be cut down to a narrower width if you want, they even have cut marks on the ends.  Be sure you have a good sharp blade–titanium doesn’t cut as easily as aluminum.  They also have marks in the stem clamp area that perfectly match their own stems so you know the bars are centered.  Officially you’re not supposed to use bar ends, but I did.  Do as I say not as do, yada yada yada.

This isn’t the first titanium handlebar ever made for mountain bikes, but it is the first and only (so far) wide ti bar with an oversized clamp – all the others currently available use the older 25.4mm clamp diameter.  Last I looked around there was a narrow 31.8mm clamp ti bar available on eBay, but, would you trust your life to a no-name handlebar?  Not me!

The Thomson Titanium bars are billed as ‘the best bar you can buy for a rigid MTB.’  Why?  Because over the years titanium has earned a reputation for being flexy and springy, and the bar is designed to have some give to smooth out the trail.  I happen to have a rigid mountain bike, so that’s where the bar was mounted.

So, how does it all work when it comes time to hit the trail?  Rather nicely.  The bars do have a bit of give, but it’s not something I really noticed for the most part – and that’s a good thing.  The bars are on my single speed, and I was worried they’d be too flexy and feel weird when I was out of the saddle and really torqueing the bars hard. But that is not the case–I didn’t notice them flexing at all.  If you’re built like a linebacker you might feel them move, but I haven’t.  The upshot: they ride a little more comfortably than the carbon bars they replaced on my bike, especially on bigger hits, where they take the sting off.  It’s a great compromise; they’re comfortable, but not so flexible that they give a vague steering feel or unpredictable handling.

Speaking of handling, I love the width on these things.  These are the widest bars I’ve ever had, and they’re much wider than the bars I replaced.  The bike feels much, much more planted and stable at high speed now and there is no feeling of skittishness or nervousness at all.  Through rough terrain the extra leverage means it’s easier to hold the wheel on the line you want, especially with a rigid fork, which is more easily knocked off line than a suspension fork.

But, 730mm is really wide, and might be too wide for some.  There are a few spots on my local trails where these barely fit through the trees, and I do not want a bar any wider.  Like I said earlier though, you can trim them down if you want.  Before trimming any bar down though you should ride it for a while at full width and see if you like it.  ‘Cause once you cut them, you can’t un-cut them.  I’ve got around 200 miles on this set and still can’t decide if I want to trim them down a little or not…

At $250 there is no denying that these bars are on the upper end of the price range.  Thomson’s carbon MTB bars retail for $100 less, and weigh about 100g less.  Aluminum bars cost even less.  So why would anyone want titanium?  Well, it looks cool for one–there’s just something about that corrosion-resistant grey metal some of us love (my wedding band is even titanium!).

Longevity and durability are less vain reasons to choose titanium.  Of the three materials, carbon is the most susceptible to damage in a crash, and aluminum has the shortest fatigue life.  Titanium weighs more than either, but has a longer fatigue life than aluminum and is less vulnerable in a crash than carbon.  Most manufacturers recommend replacing handlebars every one to three years to prevent fatigue failure.  Thomson recommends three years for their aluminum and carbon bars, but seven years for the titanium!  In other words, in the long run, the titanium bar costs less since it should be replaced half as often.

The Thomson titanium handlebars are pretty sweet, but won’t appeal to everyone.  The quality is typical top-notch Thomson, even if they are made overseas, and they match the Thomson stems and seat posts perfectly (especially if the stem and post are silver). They’re more expensive than carbon or aluminum bars, and weigh a good bit more than carbon and a little more than some aluminum bars.  But, they should have a much longer lifespan than either of the other materials.  The width is as wide as most riders will want, and can be trimmed down if needed.  There are two different sweep options that should please most riders.  They have enough give to take the sting off bigger hits on a rigid bike, but they aren’t so flexy you notice it when attacking steep sections of trail out of the saddle.

And, they’re titanium, which is pretty cool. 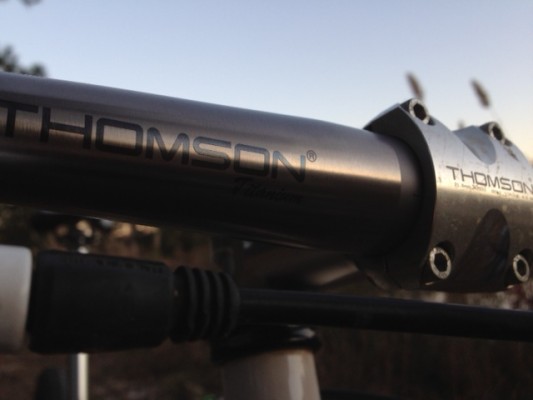 I’d like to thank Thomson for providing these bars for review.  Want to know more?  Check out their website right here.

Gear
10 Upgrades for Less Than $100 That Will Radically Improve...
News
News: Thomson Droppers, Stems and More Closer to Reality
Gear
The Most Expensive XC Mountain Bike You Can Build
Interviews
The Mullet Manifesto