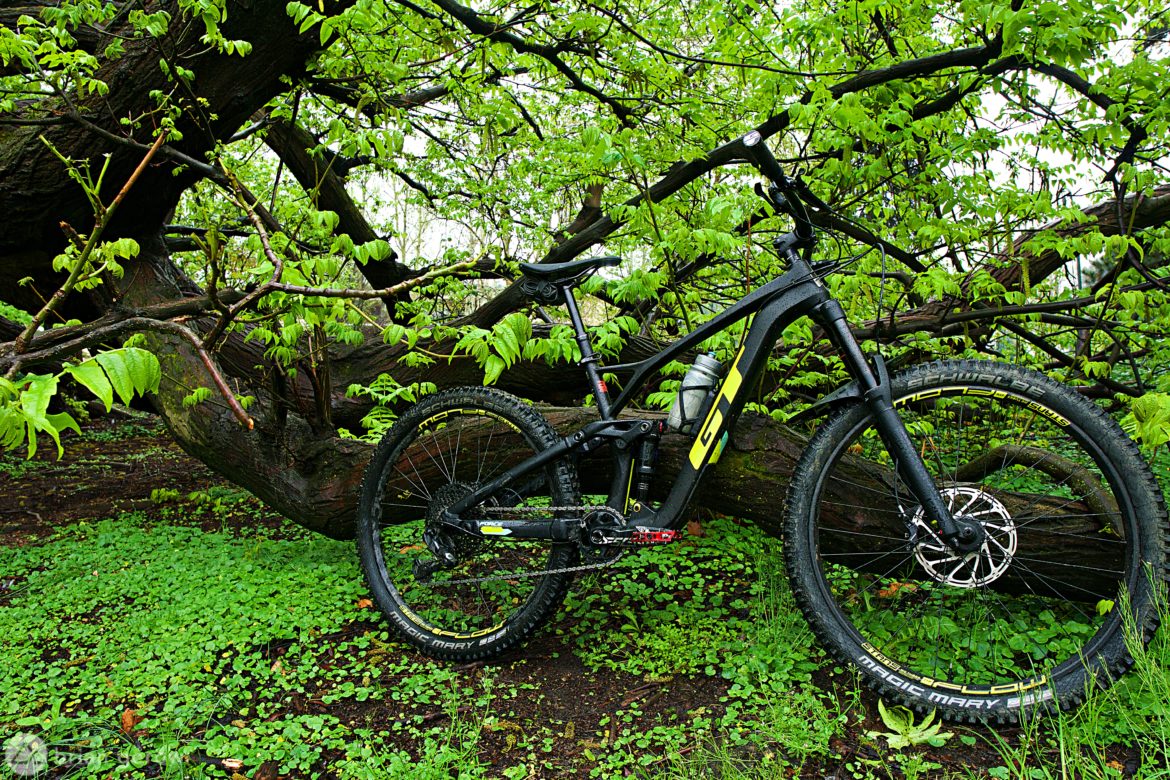 The designers at GT Bicycles brought their trail and enduro bikes back to basics in 2018, and drew up a simpler suspension design and hung some sturdier parts on the frame. To sum up the Force in one word, I would say it is “spry.” From the first ride to the final, this bike has been a joy to bounce around on.

One element of the Force’s playful sensation is its suspension and build, and the other is the fact that this is the first 27.5 bike I have ridden for an extended period of time. I rolled directly from racing 29er XC bikes and then bought a 140mm 29er trail bike. I stuck with the wagon wheels because I always had spare wheels and tires hanging around, and didn’t want to deal with selling or giving all of them away to ride a new wheel diameter. I have always assumed that a well-built bike’s wheel size wouldn’t matter much and that I would grow accustomed to whatever bike I was on, as I did when switching from 26″ to 29″ wheels. In rare form, that assumption has largely been proven true.

As a mountain bike brand that’s been around for a long time, GT took a bit of a different tact with the Force Expert than many of its heritage-brand competitors are following. There are no carbon-covered $10k bikes to leave owners fretting their monthly bills. The Force is tested and approved by pro-level riders, and available at a price point that a lot of privateers and weekend-warriors can manage.

Apart from the traditional Horst-link suspension that gives the frame a clean look and plenty of space for a water bottle, the rear tire clearance was the first thing I noticed about the bike. The grip-it-all Magic Mary tire set that comes on the bike has ample room to pack mud between the stays, or to swap in a wider tire.

I also greatly appreciate the alloy rear end of the bike, as I often manage to slam the swingarm into rocks or get sticks jammed in the rear triangle. With the Force, I wasn’t worried about cracking the back half of the frame. 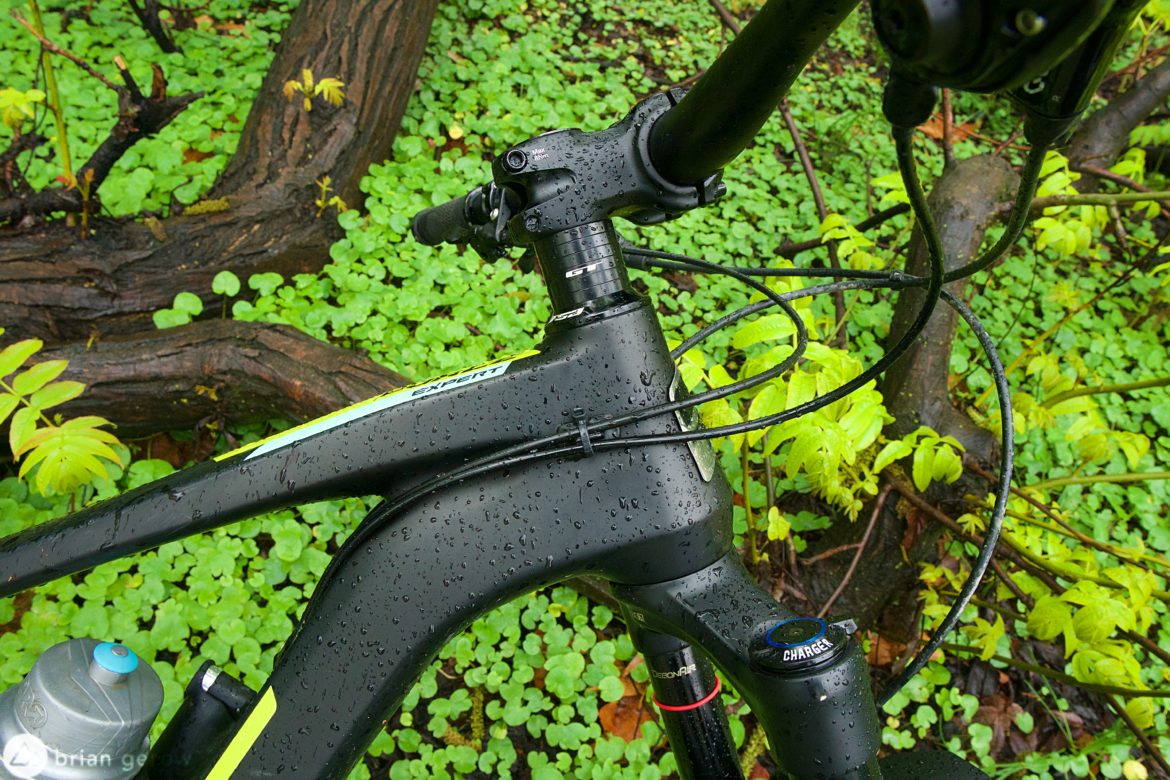 The bike’s relatively low stack height (599mm, size M), coupled with my newness to 27.5″ bikes, left me consistently wanting the bars to be higher. I spoke with GT’s suspension specialist in the U.S., who told me that he runs his bars as high as they will go, with a 20mm riser bar, on the Force. This lower front end sensation could be a boon for folks riding faster, flowier trails where having weight further forward and lower can be helpful. 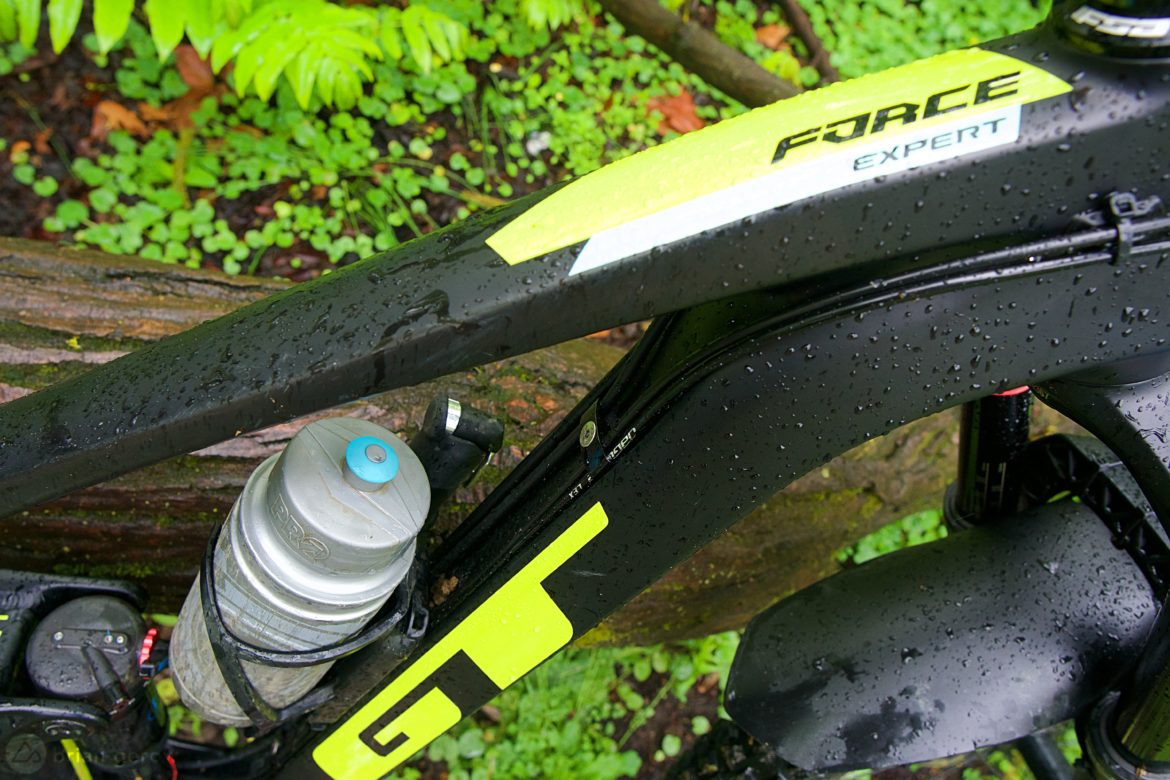 GT’s Groove Tube cable routing keeps the bike looking primped and clean, without the hassle of internal bike-dentistry. Paired with the 73mm external BSA bottom bracket, the Force is a pleasure for home mechanics to maintain. 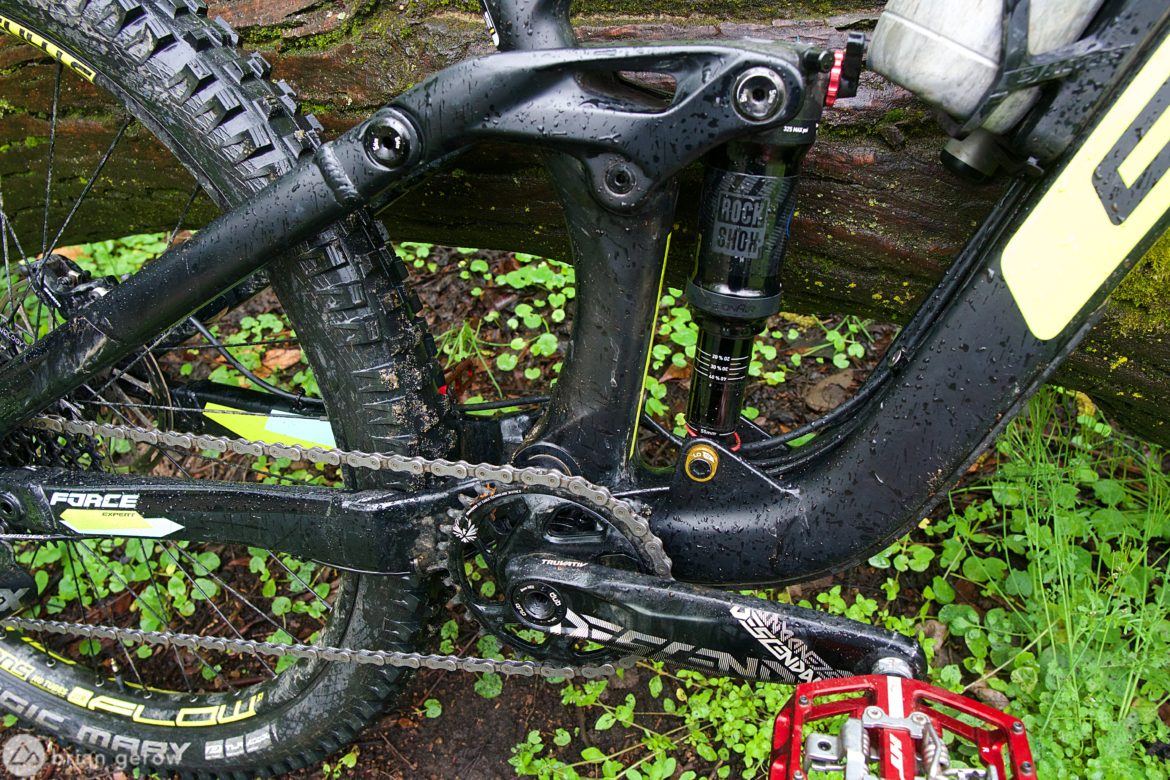 The bike’s geometry can easily be altered between the low and high settings. To adjust the geo, simply loosen the lower shock bolt until the chip slides out, then flip the chip over, press it back into the frame, and retighten the bolt. There is no need to completely remove anything, so you don’t need to worry about losing parts in the dirt, and the process takes a few minutes once you get the hang of it. I left the bike in the low mode to suit my riding style and trails, but I did test the chip and was surprised by GT’s quick and painless design.

The overall build on the Force Expert is well-conceived for the type of riding that the majority of its owners will likely get into. The bars and saddle are comfortable, the cranks are burly, and the tires are ready for hard and fast descending. 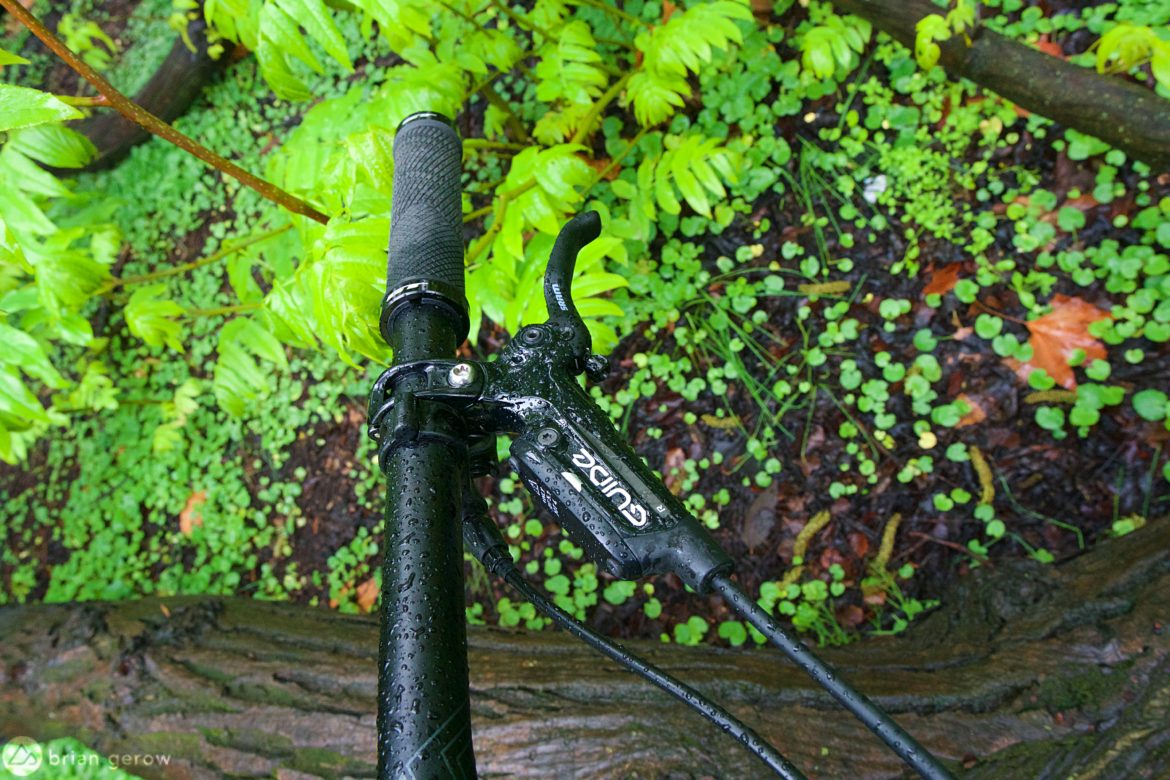 The 4-piston Guide R brakes were the weak link on the bike, and would be the first thing I would swap out if I owned this model. They felt good for the first few weeks, and slowly deteriorated in power and overall lever feel as I continued to ride the bike. I am far more comfortable with Shimano brakes, and though I have used SRAM brakes that worked well in the past, these did not do it for me. 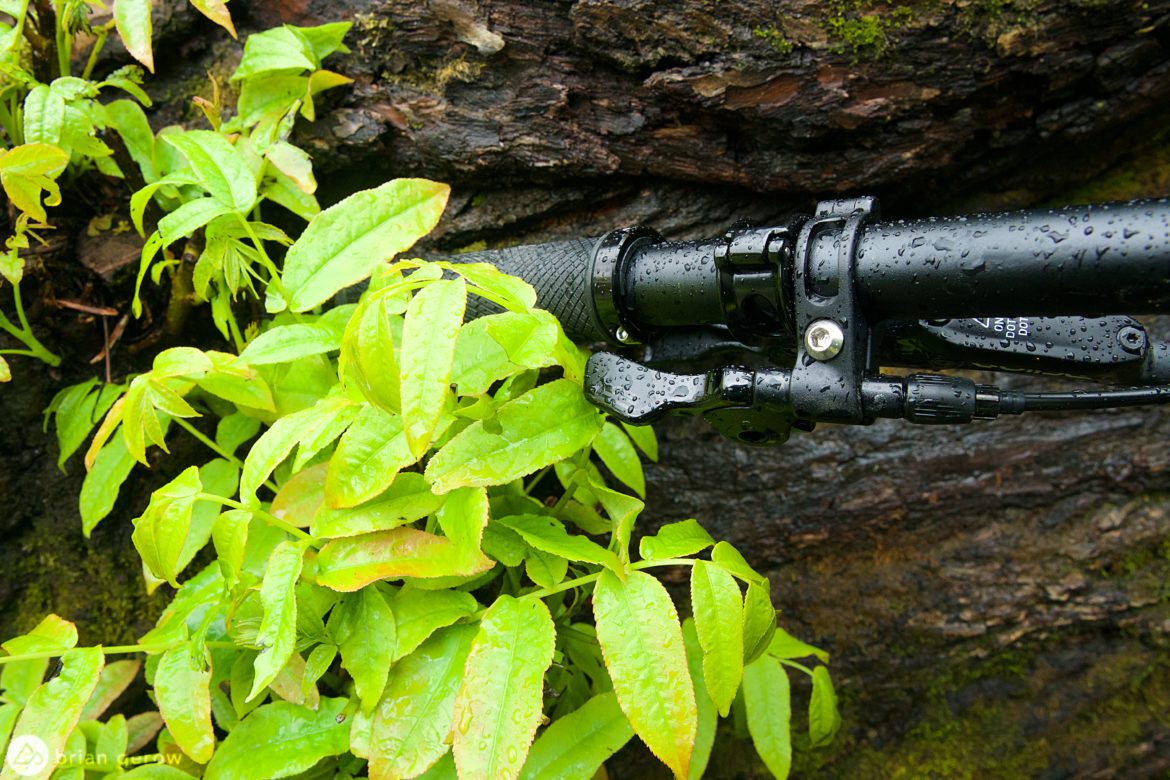 The under-bar dropper lever felt intuitive and was easy to use, which is more than I can say for the post at the other end. The 31.6mmx120mm KS Lev Si dropper was slow to return, even after adjusting and reinstalling it. Additionally, if you lift or hang the bike by the saddle when the post is down it will release and slide out to full extension. This proved frustrating when trying to maneuver the bike by hand in tricky situations, like after a crash on steep terrain, as I never knew for certain if I could lift the bike up by the saddle or not. 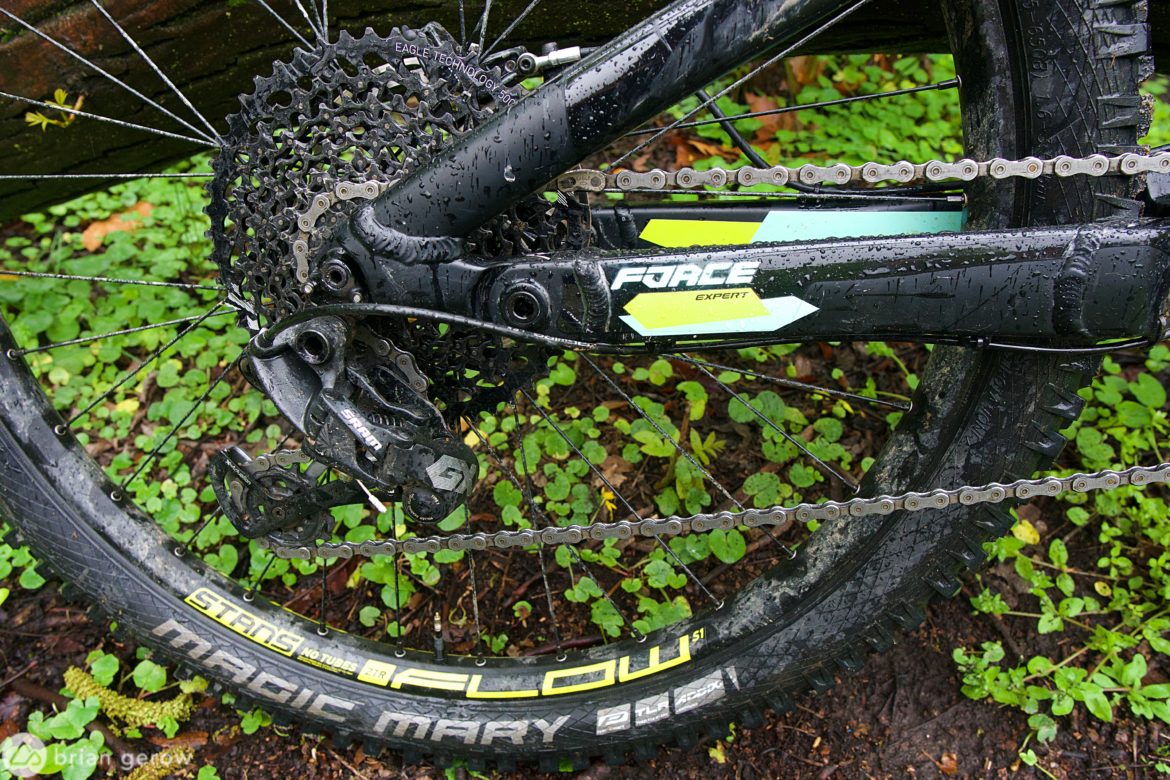 The SRAM 12-speed GX drivetrain performed flawlessly and is a good spec for the build. The bike could really benefit from a chainstay guard, though. It comes equipped with a thin, clear piece of tape that leaves the bike with a clangy and distractingly loud chain on rough descents.

The wheelset is a nice and sturdy build, with 32 spokes lacing a pair of Stan’s Flow rims to some generic black Boost hubs. The rear hub’s engagement is noticeably poor, allowing nearly a quarter of a pedal stroke to go by before the pawls engage. I tried cleaning and regreasing the pawls to see if they were mired by thick grease, to no avail. For riders who like technical climbing and precise maneuvering, a rear hub upgrade might be necessary for this bike. 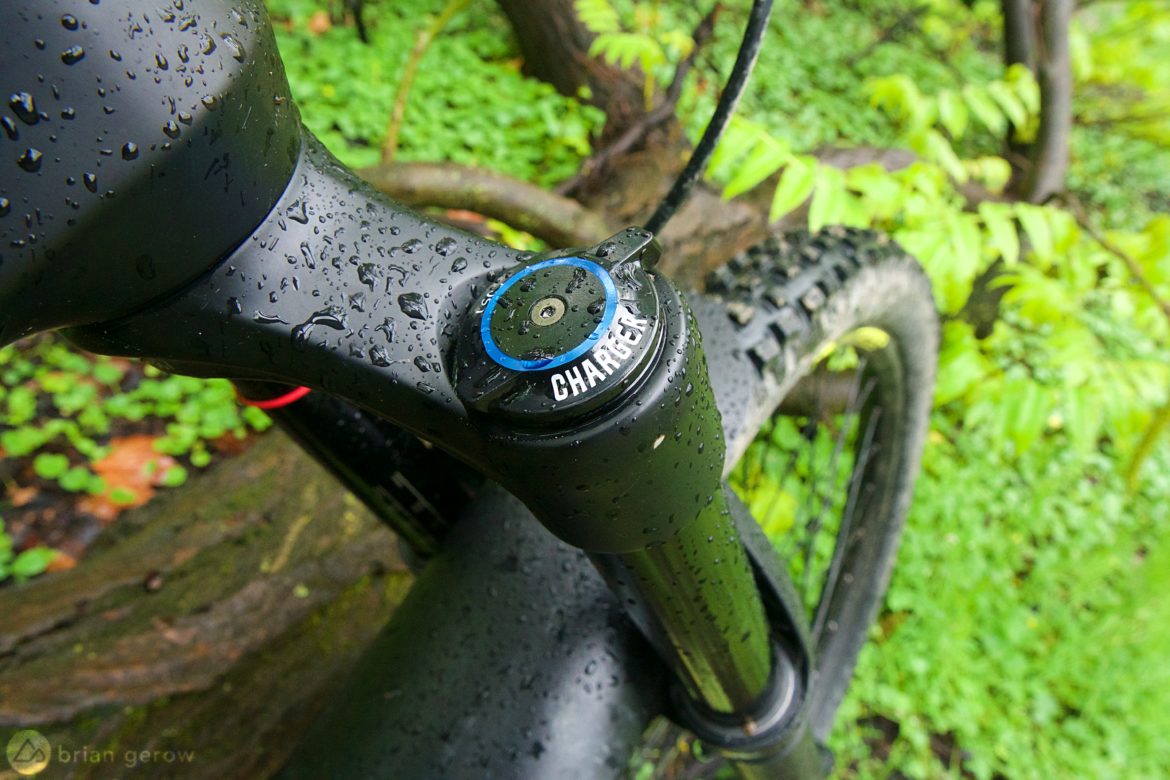 I can appreciate the simplicity of the RockShox Charge damper, but I would go for the stiffer Fox 36 upgrade and more tuneable Float Factory DPX2 shock if I were buying this bike. Both of those squishy bits come stock on the Pro build.

Over the past few months, I have ridden the Force on my local trails and traveled around northern Italy with the bike a bit. With a shorter reach, smaller wheels, and less travel than my personal bike, the Force immediately had me wanting to pop off everything along the trail, rather than plow through it. The simple suspension design only took a couple of rides to dial in and was easy to adjust for different conditions. The bike felt like it had ample suspension for most trail riding and some burlier race tracks.

Throughout my tests, the frame’s linkage remained quiet and worked flawlessly, despite my numerous attempts to overpack it with mud and tree detritus. The rear end of the Force feels stiff and precise, allowing the rider to place it where they want it.

The Force has mid-length 435mm chainstays that help the bike feel well balanced, and I had no problem manualing or wheelieing it as much as my skills allow. The 65° head tube angle felt at home on steep descents and added stability to the bike’s otherwise shorter party stance. I was surprised how good the Force feels on rougher descents, given its smaller size and reach measurements. It has a solid combination of nimble and composed characteristics that any rider can appreciate.

At the intersection of build selection and frame characteristics, the Schwalbe Magic Mary 2.35″ tires on the Force feel amazing. Traction was an immediately noticeable strength on the bike, and it stayed good throughout the test. The tires’ sticky compound grips better than expected on wet rocks and roots and digs into our local clay mud as few others can. Overall, I found these tires to be confidence inspiring, and was happy to slog them uphill for the repayment they guaranteed.

Finally, the bike climbs as well as any longer-travel whip I’ve ridden. I had to run more sag in the rear end than normal (roughly 30%) in order to fully use the rear travel, but the bike felt plenty supported with the Rochshox Deluxe RL switched into climb mode. I wouldn’t take this bike to an uphill race, but it gets to the top without feeling heavy or sluggish in the slightest. GT’s suspension designer says that they have swapped the rear shock tune on new models, so folks should be able to squish the sag they are accustomed to while taking full advantage of the rear shock.

At the end of the trail, this is a fantastic bike, properly designed for a wide variety of riding styles and conditions. Folks who want to go out and play with friends on the weekends will be stoked on its playfulness and overall lively character. For riders looking for a more enduro race-ready build, with highly tuneable suspension and better brakes, the Force Carbon Pro is worth the $1k price bump.

These days I hoot and holler while riding as fast as I can on rough, natural tracks. If I bought this bike I would order one size larger to boost the reach, swap the brakes for some Shimano Saint 4-pistons that I am familiar with, swap the seat post for one that stays up or down as it is told, and ride it as often as possible. The Force Expert is a sweet whip, eager to pop off whatever you point it at.

As for this first 27.5″ experience, the smaller wheels did require more momentum to clean rougher sections that 29″ wheels do, and they occasionally caught on larger holes or obstacles in the trail. But once I was used to these shifts I forgot about the wheel size altogether.


We would like to thank GT Bicycles for sending the Force Expert for review.