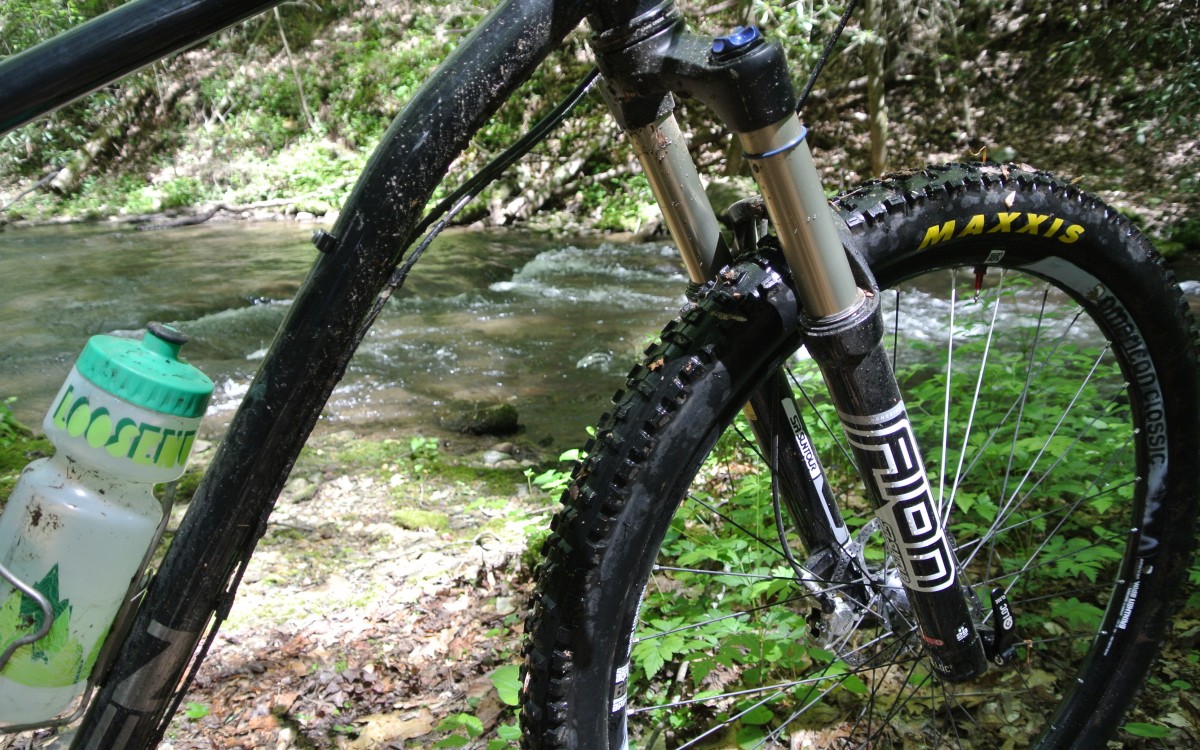 SR Suntour has been in the suspension game for over 25 years, but they’ve really been making a push into the high-performance end of the market over the past few years. Greg reviewed their Auron fork last year, and I actually have one on a personal bike as well. It’s an excellent fork that delivers performance that rivals the much more expensive competition. When I was looking for a fork for my Zen Trail build, I reached out to SR Suntour to see if they could send out the relatively new Aion, the little brother to the Auron.

The Zen Trail was designed to be used with a 120mm fork, so that’s what I went with. Like the Auron, the Aion uses burly 34mm stanchions. SR Suntour sent the RC model, which features low speed compression adjustment along with rebound adjustment. Compression is adjusted via a blue knob on top of the right fork leg, with rebound found on the bottom of the same leg. Air pressure is adjusted via the top of the left fork leg.

Out of the box with an uncut steerer tube and the axle installed, the Aion weighed in at 2160g / 4.74lbs. For a 29″ fork with large stanchions, that’s a pretty respectable weight. SR Suntour, like other suspension manufacturers, uses a proprietary axle design, which they call Q-Loc. Basically, the design forgoes a threaded axle in favor of an expanding collet design. If you ever get curious and want to take one of them apart, STOP! There are a lot of pieces–some very small–that make up the axle, and you will immediately regret your decision.

The magnesium lowers look beefy and are joined by a wide but thin arch. That arch affords tons of tire clearance. I’ve been running burly 2.30in trail tires and a fender, with plenty of room to spare all the way around.

With no recommended pressure ranges provided for the fork, it was a bit of trial and error to get the Aion dialed in. It also seemed to be less forgiving: small changes in air pressure had a pretty drastic effect on ride quality. Just a few pounds too low and the fork dove through its travel easily. A few pounds too much and the fork was harsh on smaller bumps, rocks, and roots. When I finally did settle in on a pressure, though, the fork was great: excellent support, smooth operation, and a nice ramp up at the end of the stroke.

The knobs for the compression and rebound adjustment are made from aluminum, which is a nice touch for a fork in this price range. However, their operation wasn’t as smooth as the higher-end Auron. The detents were less crisp and the compression knob in particular required a fair bit of force to turn. And, as with finding the correct air pressure, it took a lot of fiddling with both rebound and compression to get the fork feeling good. Setting up any fork is going to require making changes… it just seemed to me that the Aion worked best in a very narrow range of settings. Taking the time to get the fork to feel the way I wanted it turned out to be well worth the effort, though.

Now that I had the fork running like I wanted, it was time to hit the trail. The first real ride on the Aion was during the Brutal Loop, a 40-mile ride with 7,000 feet of climbing. The route covered gravel roads, high speed descents, chunky chunder, and buff, swooping trails.

Throwing the bike into the first rocky section, I immediately appreciated the stiffness of the fork. It held a line extremely well and gave me the confidence to charge the rough stuff. Landings were smooth and controlled. Once I had the correct pressure, I had no issues with bottoming out the fork. On smooth trail, the fork stays high enough in its travel to avoid any pogo stick motion when sprinting out of the saddle. There is some movement there, obviously, but nothing detrimental.

Many of our trails here in the Southeast feature a lot of roots and rocks, and the Aion had no problem gobbling them up. Even when obstacles were off camber, or in the middle of a turn, they couldn’t knock the Aion off line. On successive impacts like braking bumps, the Aion remained composed, reacting to the terrain without packing up. I actually ended up putting the Aion on the Niner JET 9 I was testing during the Trans-Sylvania Epic. The Niner was spec’d with a RockShox SiD, which was getting worked over on the relentlessly rocky Pennsylvania trails. I rode the final five days of the race with the Aion bolted on, and my only regret was not swapping it sooner.

I even used the Aion for my recent Pisgah campaign of the Jerdon Mountain Challenge and the Off Road Assault on Mt. Mitchell in North Carolina. Between those two races in two days, I covered nearly 90 miles and 14,000+ feet of elevation gain (and loss!). The fork took everything Pisgah doled out in stride.

As I mentioned above, tire clearance on the Aion is superb, which has been welcome on the handful of sloppy rides I’ve been on this summer. I leave the fender on full-time as it helps keep grit and grime away from the seals, even in dry conditions. I’ve put several hundred miles on the fork in varied terrain and weather without any issue. It still operates as new.

The Aion may lack some of the refinement of its burlier (and more expensive) brother, the Auron, but it’s got it where it counts:  smooth operation, a stiff chassis, tire clearance for days, and reliability. Factoring in the Aion’s $550 MSRP makes it a really attractive choice for someone building a burly bike on a budget. Once you find the settings that work for your bike and riding style, there’s little left to be desired.

Thanks to SR Suntour for providing the Aion for review and to Christopher for helping out with photos!