In August of 2017, Shimano announced that they had improved the power and modulation on my favorite brakes, the XT M8000s. The new brake would be offered with a 4-piston caliper, reportedly making the brake 20% more powerful.

I appreciate Shimano brakes for their overall power and feel, dead-simple bleed process, interchangeable components, and lasting, robust construction. I travel with my bike to races and events frequently, and I like being able to find replacement bits wherever I am. With XT this is almost never a problem.

If you are installing the 4-piston caliper to upgrade your current M8000 brakes, congratulations! You will want to grab a BH90 hose to connect the new calipers to your existing lever, as the banjo bolt differs slightly. The calipers themselves retail for $119.99, and you can fetch a brake hose for about $30.

I mounted these brakes on two different bikes that required drastically different rear hose lengths. Swapping hoses and bleeding the brakes was as easy as usual with XT stoppers. The brakes use Shimano’s one-way bleed system, though when swapping out a hose I use an additional syringe at the caliper end to ensure I only have to bleed once. Stay tuned for a future article on the two-way Shimano bleed.

Aligning the calipers was a breeze, in part because the 180mm rotors from my older brakes were still true. For all of the frustrated stories I have heard about aligning 4-piston calipers, I have never had a problem with Shimano brakes. I kept the rotor size consistent after switching from my two-piston XT brakes so I could get a solid comparison between the two different calipers. I also swapped out the stock resin pads for metal pads after a couple rides, as that is the material I am accustomed to.

The lever for the new brakes is the same as the one used with the 2-piston M8000 system, but the hydraulic hose and caliper are quite different. With the burlier caliper to make room for two extra plungers, the XT M8020 brakes each weigh roughly 40g more than the two-piston, M8000 model, but weigh close to 100g less than the DH-designated Saint.

Having ridden with both XT M8000 2-piston and Saint 4-piston brakes I was curious to see how noticeable the overall power difference would feel. With a reported 20% power increase over the former, yet still far below the Saint’s reported 50% increase, they fill an interesting middle ground. Given the increased popularity of steep trail riding, enduro racing, and hefty e-bikes, this seems like a necessary addition to Shimano’s lineup.

Now on to the ride.

Here I’ll focus on the overall brake feel and stopping power since we have reviewed the functionality of these levers, and similar models, in the past.

I rode with the XT M8020 brakes on my Nordest Bardino, and Ancillotti Scarab Evo29. Both are burly descenders, designed to ride fast and rough, and both proved fantastic test subjects for these tough brakes. From the steep, scrappy tracks behind my house to former EWS and Superenduro stages, I had ample opportunities to push the heat and wear properties of these brakes. They did not disappoint.

To sum up the stopping power of the XT four-piston, as compared to the two-piston, the difference is akin to that of braking with a proper gravity tread vs. an XC or semi-slick tire. It feels like the reported 20% power increase is quite accurate, and the performance is noticeably confidence-inspiring. I found myself entering corners and jumps far faster, knowing that I could scrub loads of speed quickly. My overall time on several home tracks has improved since switching to these brakes, with no other change to the bike. I also dig the added power while practicing endo-pivots and other silly skills.

Brake modulation is as personal as egg-cooking preferences, and if you like your eggs fried Shimano style, these will suit you well. I did not have any issues with wandering modulation or bite points. I set them, went on heaps of rides, and they continued to work exactly as they were designed to work.

That power difference among the two XT brakes is nowhere near the leap between XT two-piston and Saint brakes. The M8020 did not require me to rethink or relearn how to modulate the lever, and the added bite has yet to throw me over the bars. I had a nice dirt-nap the first time I rode a set of Saints because I hadn’t familiarized myself with the brake’s power before hitting the hill.

Aside from swapping the rear hydro tube, I have not had to bleed the brakes or swap pads. After several months of near-daily rides and a good amount of rain riding, the front and rear pads have plenty of life left in them. I bled the brakes before writing this review to check the fluid color, and I am happy to report that it is as transparent-red as ever.

If there is an elephant in the room, its name is Pad Chatter. The finned pads do make a bit of noise under heavy braking loads, but you can quiet them by swapping to the less expensive “finless” version. I didn’t mind the small amount of chatter, which is often drowned out by the spray of stones and trail debris anyway. 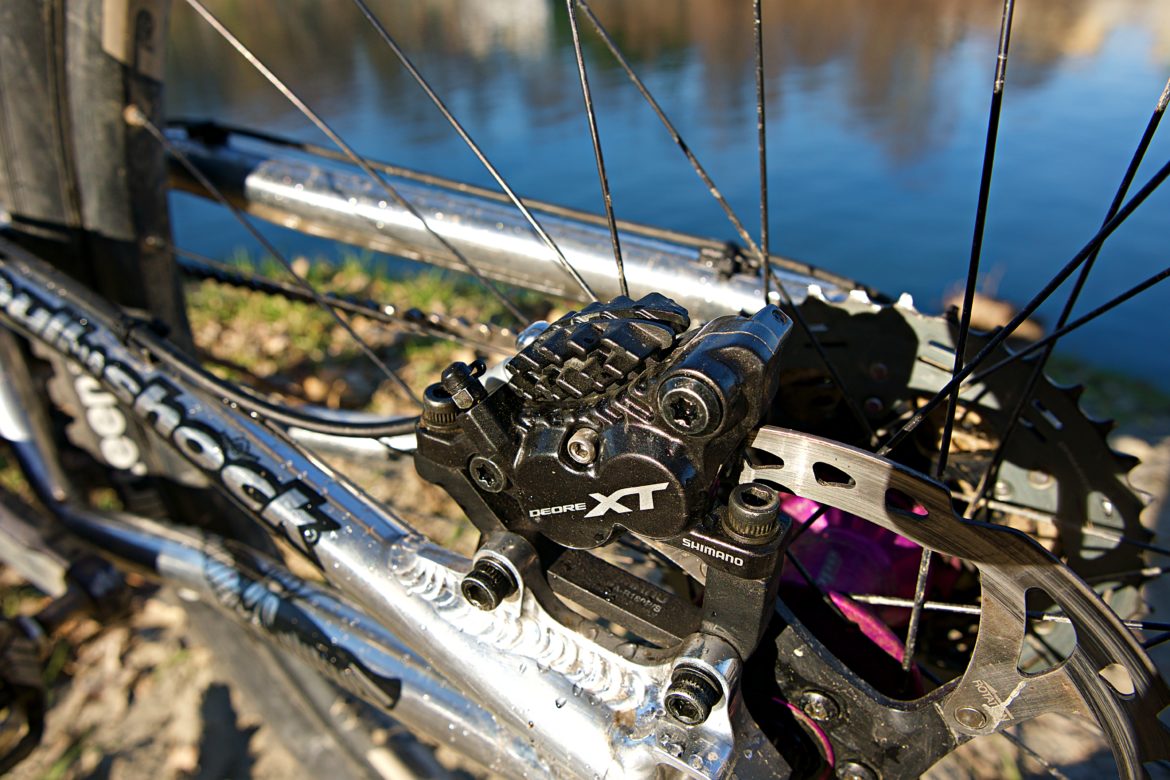 Anyone in search of additional stopping power with the reliability of XT brakes will be stoked on the M8020s. You can save coin by only swapping the caliper and hose, making this a solidly affordable upgrade. The only element of these four-plungers that I hope Shimano will improve upon is to drop a few grams from the scale, which the brand sometimes does as they trickle tech down to less expensive components in their lineup.

Thanks to Shimano for providing the XT 4-piston brakes for review.

Great write up. You mentioned modulation a bit but probing a bit more, wondering if the 4-piston offered a wider range of modulation over the M8000, or the previous iteration M785s. I’m on M785s now and am satisfied with the power but the bite is pretty harsh. Would like a bit more lever feel without straying away from Shimano.

Ciao Entrenador,
I’m glad you like it! I wouldn’t say that these necessarily offer better modulation than the M8000 or M785. They offer Shimano modulation, which in my experience is fairly similar across the range of brakes, with the exception of Saint’s that bight faster and harder.
If you want to broaden the range of modulation on your M785s you could experiment with swapping out the pads for a different compound. Depending on what you are currently running, a different pad compound can soften the bite point a bit.
Additionally, keeping your rotors as clean as possible will allow your brake to bite as it was designed, not getting stuck on globs of brake residue.
Let us know if you find the modulation you are looking for.

Are they comparable with Shimano MT520?

Shame on Shimano for jerking us around like this! They absolutely should have included it with the caliper. When I called Shimano to get the part number, the representative agreed and was going to pass the info along. I doubt they will do anything about it though.

Hey Tim, My apologies for not replying sooner. Thanks for sharing your solution to the banjo conundrum. I hope the brakes work great for you!