While mtbgreg1 was out shredding the gnar on the Santa Cruz Bronson, I was enjoying a more laid back ride on the 5010 Carbon. 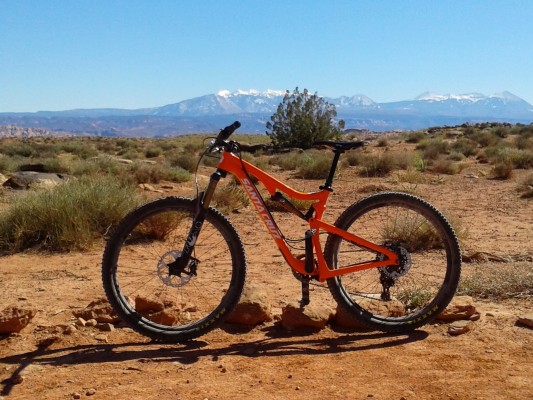 Santa Cruz pegs the 27.5 wheeled 5010 as a bike for “exploring,” and as such they built on the base of knowledge gleaned from the Bronson, while dialing back the suspension travel to 5in and steepening the head tube angle to 68°. The result is a well-mannered trail bike that is ready for those all-day epics that we all crave.

Taking the 5010 out on to Moab’s sunny desert singletrack was just awesome. The bike feels like an extension of the rider’s body. You don’t so much point it where you want it to go, but just think… and it goes there.

Climbing was adequate, but in every other aspect of trail handling this bike just dominates. Ledges and moderate drops: check. Tight s-turns: no problem. Snappy acceleration: you betcha.

By way of comparison, I set a PR on the Moab Brand Trails Lazy/EZ loop with the insanely-fast 27.5 Foundry Tomahawk carbon hardtail race bike, but the 5010 gave me my second place times for the same loop.

The demo unit I tried was the carbon model with a 1×11 X01 drivetrain setup and a Rock Shox Reverb dropper post with internal cable routing. This was my first ride on the 1×11 and it was pretty slick for trail use, however I’d also like to see how much is given up on the top end when running the 32t chainring up front. This setup makes for some clean bars that have brake levers, of course, and then a single shifter on the right and a dropper remote on the left. Nice and simple.

In keeping with the top-of-the-line demo theme, this ride also had the Enve carbon wheel upgrade. If you have never heard of Enve, they are definitely in the “if you have to ask the price then you can’t afford them” category, however they are also the most amazingly-stiff hoops on the planet and they mesh very well with the 5010’s carbon frame to provide the ultimate trail feel.

Don’t panic just yet, though, as Santa Cruz also offers this bike with an alloy frame that adds 1.68 pounds to the frame weight, but starts at a much more reasonable $3,299 for a complete bike. You can also buy the bare frame with rear shock for $1,950 (alloy) or $2,699 (carbon) and build it up any way you like.

There is a ton of buzz about this bike all over the interwebs, and after taking it for a ride, I believe it’s well deserved.

On a closely related note: is anyone interested in buying a well-maintained 2011 Giant Anthem X 29er? 😀

Gear
The We Are One Arrival Is a Mid-Travel Bike With...
Gear
We Tested 5 Tubeless Tire Sealants to See Which Ones...
Culture
Singletracks Best Reads: June 2022
Trails
An Intro to Bikerafting: How it Works, and How to...
Subscribe
Login
Please login to comment
3 Comments
Most Voted
Newest Oldest
Inline Feedbacks
View all comments

I’m digging Santa Cruz’s new bikes. But of course, they’ve always done a pretty fantastic job! This sounds like the perfect 27.5 rig for someone who doesn’t want or need quite as much of the all-mountain burl.

Yeah, I bet that is a fun, well balanced bike. Similar to mine, but with smaller wheels, so I think it has potential to hit a few of the tighter lines and turns, but just doesn’t roll over chunder as well at speed. It all depends on the way you want to be able to ride…but I am not really digging the creamsickle color :p

How does it compare to the Bronson?