Ibis is a relatively small company, but their beautifully-designed frames and obsessive attention to detail have made this brand a cult classic with a rabid following. It seems like every year at Outerbike, the Ibis bike racks stand empty because all of their rigs are constantly out on the trail. However, I was able to snag one for a test ride this past weekend. 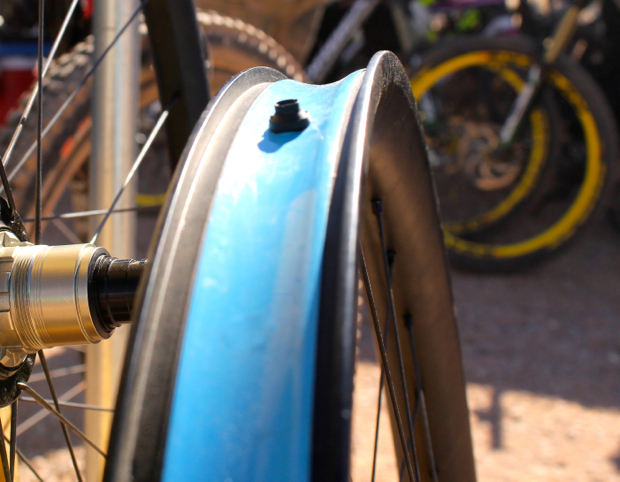 While I was excited to ride the HDR equipped with 27.5 wheels, my main goal was to ride Ibis’s new 41mm carbon rims. With most rim widths for standard mountain bike wheels in the 21-25mm internal width range, with a 41mm-wide outside width (35mm inside width) this rim looks absolutely massive in comparison! While it’s not quite up to fat bike widths, it’s getting pretty dang close. 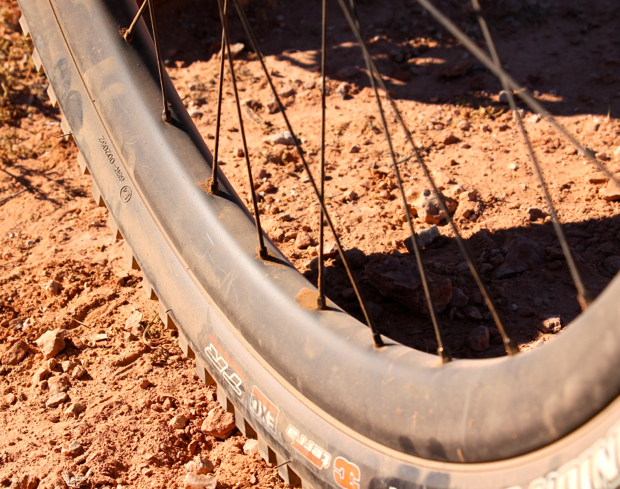 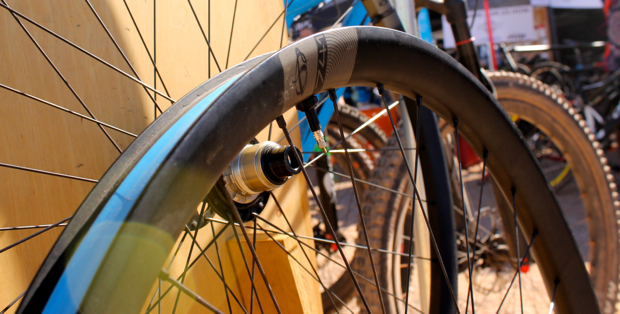 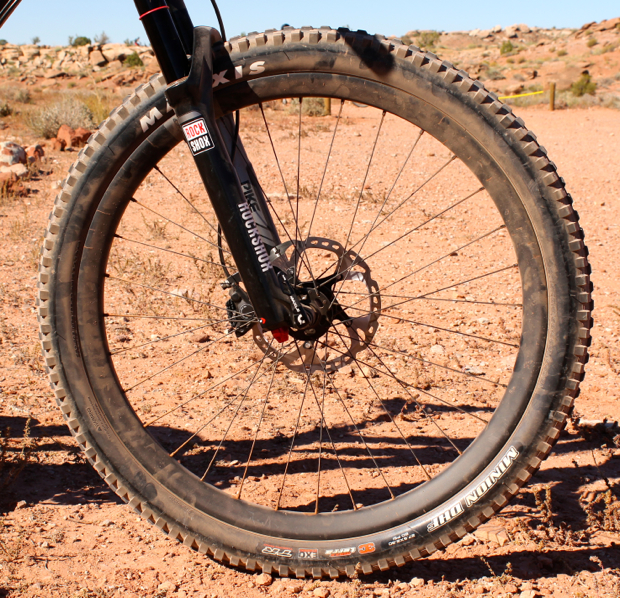 My first question about this new wheel setup was, “what tires work best on them?” Proper tire selection for these massive rims is crucial. According to Ibis, it’s best to start with a tire that normally has a rounded profile, as the wide rims will square out the profile even more. Additionally, it’s best to choose about as wide of a tire as possible. Consequently, my test rig was running Maxxis Minion DHF treads, which I was more than happy with. 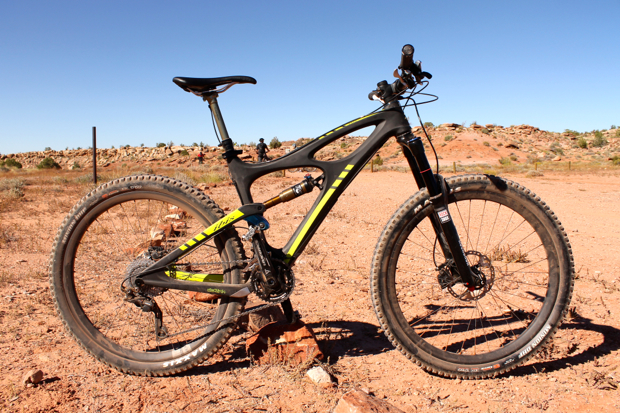 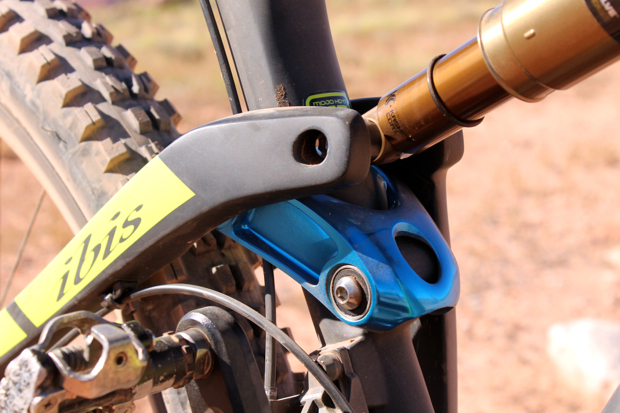 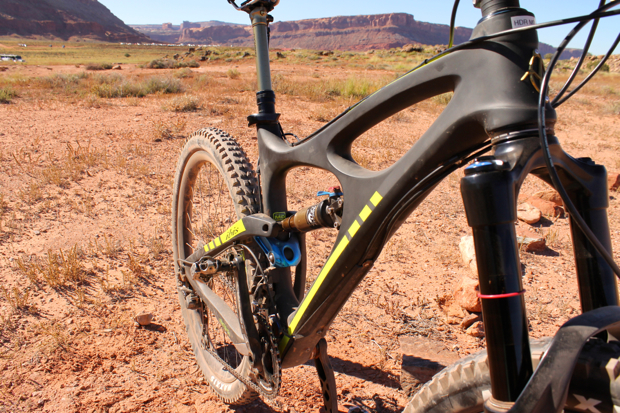 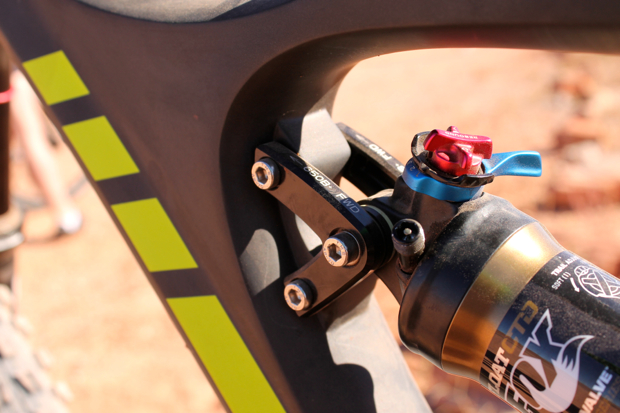 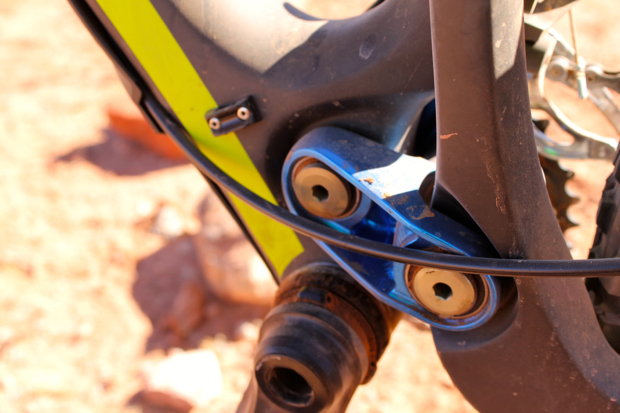 Out on the trail, I found the Ibis Mojo to be a pretty rocking bike! I’ve never had a bad experiencing riding an Ibis, and the latest rendition of the HDR continues that legacy of fantastic riding and handling. For a 160mm-travel bike, the HDR was ridiculously light, nimble, and capable on the climbs. It was such a natural climber that I simply forgot to even switch it into trail or climb mode, and ran it full-open the entire time–and I loved it. This great climbing is probably due, in part, to the 67.5-degree head tube angle, which is 1-2 degrees steeper than most of the other bikes that I’ve been riding in this category.

Click here to see the Ibis Mojo HDR in action.

Of course, once the descending starts, that’s where the HDR really shines! Thanks to the maneuverable qualities of the 27.5 wheels and the extremely light complete bike package, this bike felt very maneuverable and able to flick around and over obstacles without having to smash through everything. However, if smashing is what you want or need to do, the HDR is plenty burly and capable of saving you on flat drops, cased jumps, poor lines, and much more! 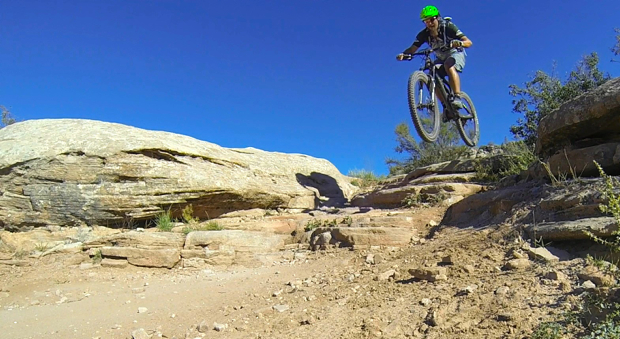 But the big question I’m sure you’re wondering is: “how did those wide rims ride?” While I would have been able to get a clearer picture of how the new 741 rims affect the overall ride quality of a bike by mounting them on my own rig with a set of tires that I’m more familiar with, I do think there are a few key takeaways from this test ride.

1. Traction with these wide rims is absolutely insane! I’m a huge fan of getting maximum traction out of my wheels and tires, and these ginormous rims blow anything else short of 29+ and fat bikes out of the water. There’s absolutely no comparison to a “normal” wheel. While a certain amount of that increased traction may have been due to running a DH tire, I’d say the majority of the increase should be credited to the increased tire profile and air volume.

2. The traction increase was massive, despite running higher tire pressures than I normally would. This test ride took place at a bike expo, after all, and I didn’t want to risk dropping the tire pressures too low and be responsible for destroying a $1300 wheelset… but even with running higher pressures, the traction was drastically improved. If these were my own wheels, I’d drop the pressure significantly, especially considering the reduced possibility of pinch flatting due to increased air volume and a tire profile that allows the sidewalls to line up with the rim, instead of deforming around it. I’d be willing to bet you could run astronomically-low tire pressures on these rims, with no problems. 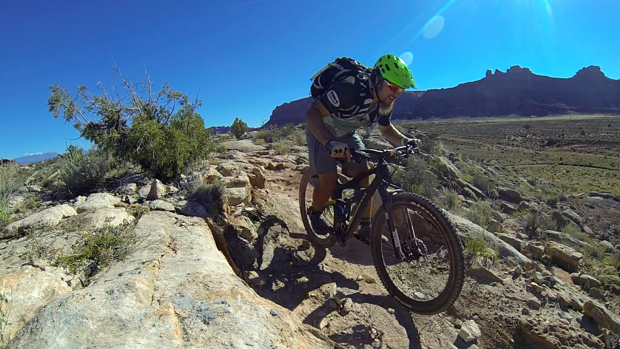 3. Despite running DH tires, these wheels felt crazy light! Popping wheelies and flicking the bike in the air was no problem whatsoever. The entire combination felt incredibly light, but with bomber traction.

4. The only potential downside is that these rims might not work on all bikes. Even on the HDR, with the DHF mounted on the 741 rim there was almost no room to spare in the chainstays. If you were to hit a rock hard and deform the tire even a bit, you’d instantly be rubbing in the frame. While I think the traction benefits of the 741s are undeniable, adopters of these new wheels will need to double check to make sure that they’ll work with their current bike. Hopefully down the road we’ll continue to see increased clearance in the stays to accommodate these wide wheel and tire combinations. 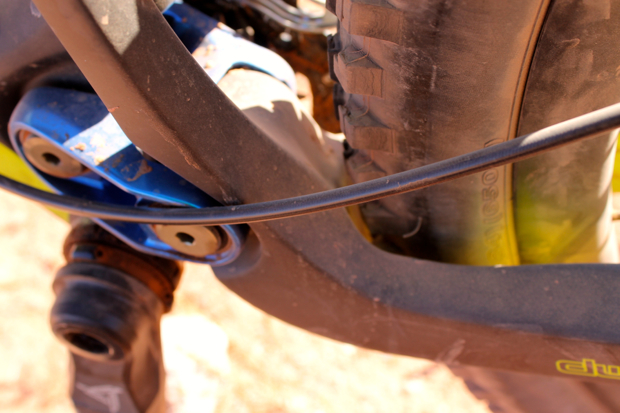 The HDR was, quite simply, one of the best bikes I’ve ridden all year. And the 741s? I want a pair of these wheels. Fat bikes are changing the way we look at mountain biking, but I think the simple addition of a wider rim has the potential to completely change the way even “standard” mountain bikes ride and handle.

These wheels might not quite be there yet, but pretty soon they will be “the new normal.”

Gear
You Have $5,000 to Spend on a Mountain Bike. Which...
Progression
Sizing Up or Down Plus Handlebar Widths and Crankarm Lengths:...
Gear
Never Underestimate the Power of a Good Zip-tie
Gear
The Shimano GRX Drivetrain Brings Familiar Mountain Bike Tech to...
Subscribe
Login
Please login to comment
4 Comments
Most Voted
Newest Oldest
Inline Feedbacks
View all comments

Greg, what was the width of the tire?

The only width of the 27.5 Minion DHF is 2.5″, but with the wider 41mm rims the tire is spread out even more, resulting in a wider tire profile and bigger contact patch. I didn’t have a tape measure with my to get data on the actual width of this tire/rim combination, but it’s visibly wider to the naked eye.

Hi Greg…. I’m curious to know how the climbing was with the 41mm rims.

Since I conducted this test at the Moab Brand Trails, I didn’t do any extended climbs and only really rode short, punchy climbs. But as for the performance of these rims, the wider tire profile provides HUGE amounts of traction… and that includes when climbing. Since these are high quality carbon rims, they run light and fast as well. In short, I don’t think there’s much of anything that these rims would be worse at than normal rims… unless you choose the wrong tire for the rim.