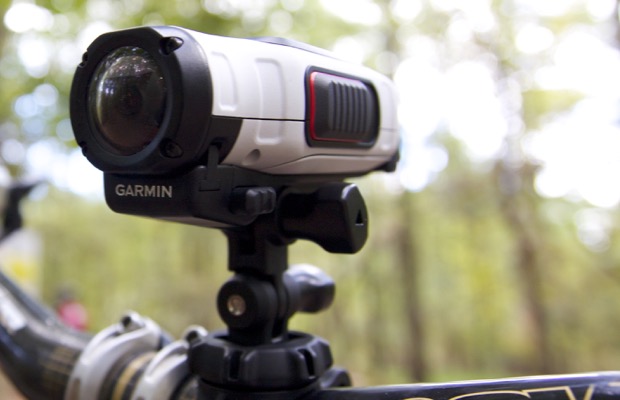 I know what you’re wondering: What the heck does Garmin know about producing helmet cameras? I had the same question so I was excited to get my hands on the VIRB Elite for testing. In the end, I came away loving all that the VIRB Elite has to offer.

First things first: the VIRB Elite is a helmet camera and a GPS. Before testing, I assumed it was a camera with GPS thrown in but there’s more to it than that. I guess I should’ve known given that Garmin was willing to put their name on this camera. 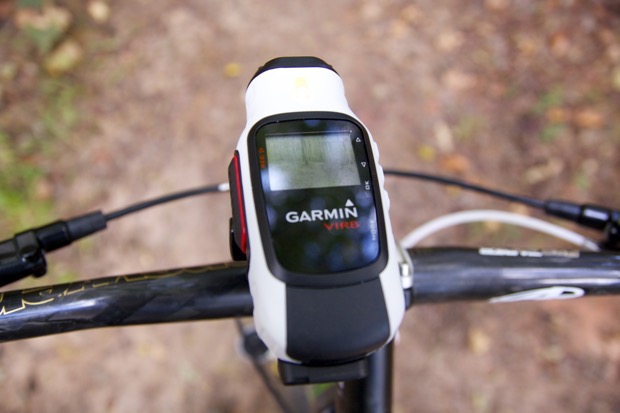 On the GPS side, the VIRB Elite includes an accelerometer and altimeter for improved accuracy, and all your in-ride stats are visible on the unit’s 1.4-inch color screen. Speed, distance, and time are all visible, along with elevation, compass heading, and even a real-time G-force meter. Just keep your eye on the screen as you bottom that G-out!

These sensors allow the VIRB to offer smart recording modes like one that only records video when you’re riding downhill (since Garmin knows, like everyone else, that climbing videos are boring). The VIRB Elite gets roughly 3 hours of recording time on a single charge and I found I got at least that much life using the VIRB as a GPS with occasional photo snaps and short video takes. 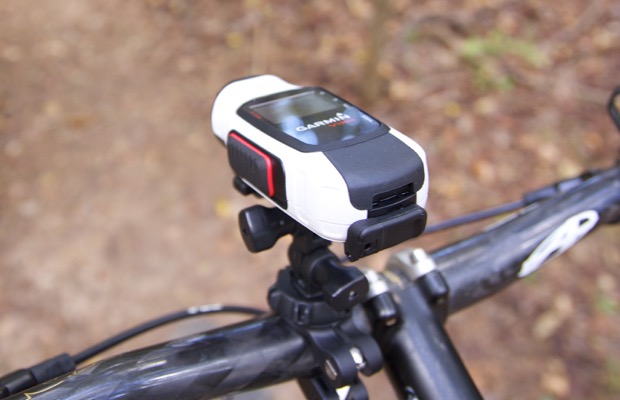 The camera itself is “bullet-style” which makes it a natural for bar mounting, which has the added benefit of allowing you to see the GPS screen during the ride. Rest assured, however, that Garmin offers pretty much any mounting system you can imagine from chest mounts to helmet stickers and even bow mounts for archery enthusiasts. The whole package is IPX7 waterproof rated, which means it should be able to withstand wet riding conditions–up to 1 meter underwater for 30 minutes.

The VIRB Elite is wi-fi enabled which allows you to pair it with a smartphone app to preview shots, start/stop recording, and adjust camera settings. ANT+ means you can use compatible Garmin devices like the Fenix 2 GPS watch or Edge cycling GPS as a remote control. You can also pair it with additional sensors like cadence, heart rate, and temperature monitors.

Garmin offers free software to edit videos shot with the VIRB. And because the VIRB Elite includes GPS, you can even watch a map overlay sync’d to your POV films.

Getting rad on the trail

As an action camera, the VIRB Elite works as expected, producing accurate colors with a good field of view thanks to the wide angle lens. Some shots ended up underexposed, especially when transitioning between light and dark areas on the trail, though to be fair it is possible to fiddle with the camera settings to correct for conditions. 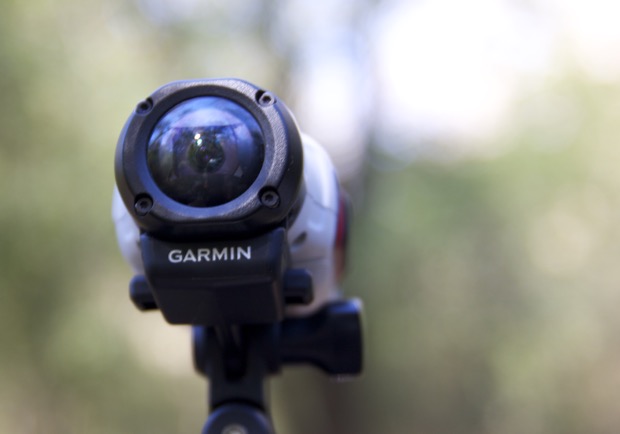 Trail videos are evolving and today we’re seeing fewer true POV footage and more fixed shots and even follow cams.  Still, Garmin has made an effort to take the shake out of helmet camera videos, and while the company has made an admirable effort, you’ll still want to experiment to find the most shake-free spots on your bike or body for filming. Garmin even admits as much: “With the Digital Stabilization feature engaged, VIRB Elite adds a little stability to bumpy rides and adventures so you can share a smoother video with your friends.” [Emphasis added.]

I got the best shots out of the VIRB from fixed positions and the slider-style record switch makes it easy to start and stop recording. For the video above I basically left the camera on during my entire ride and used the slider to start/stop. The camera never “went to sleep” on me and kept tracking GPS data the entire time. My only gripe is that the battery cover doesn’t include a screw-type tripod adapter to use with my Gorillapod. 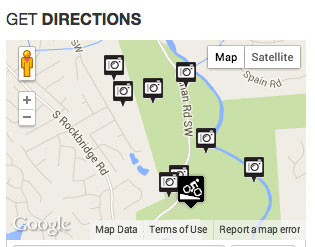 I used the VIRB Elite extensively for taking photos on the trail. For several rides I set the VIRB to take a still photo every 30 seconds and to my surprise, the camera snapped away for hours without complaint (that is, after I figured out how to disable the sleep mode setting). Photos are geo-tagged, which allowed me to help create cool photo maps on Singletracks–like the one to the right–without having to stop to take out my camera during the ride. Photos automatically snapped while I was moving often turned out blurry (which can be a cool effect sometimes) so I also made sure to stop and point my bars at interesting trail features I wanted to capture clearly. This turned out to be a huge time saver and kept flow interruptions to a minimum. 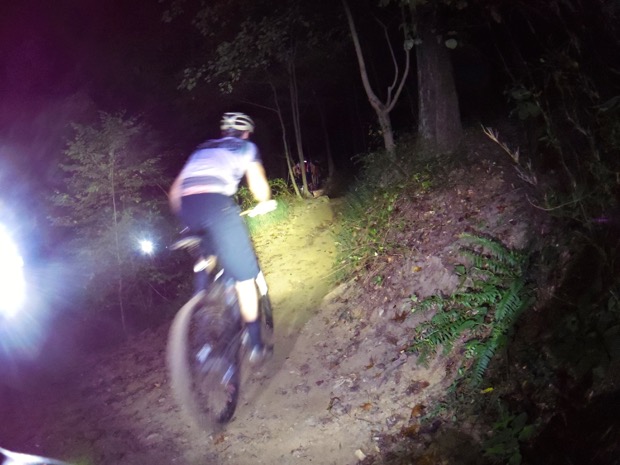 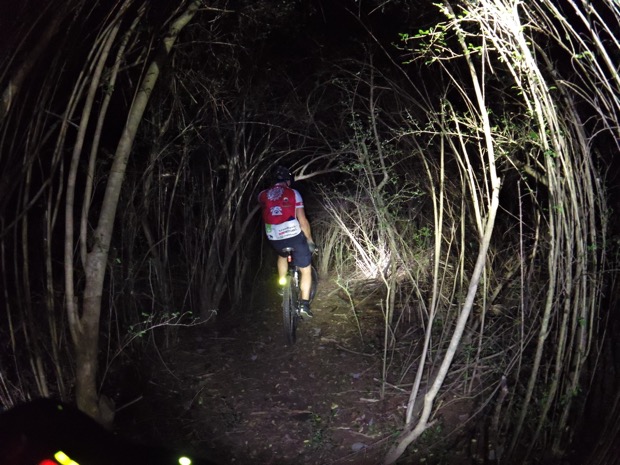 The VIRB recorded good sound on the trail, only slightly muffled. The case proved to be especially rugged, as I slammed into it for some shots and dropped the camera out of trees trying to get others.

The color screen on the VIRB is easily one of my favorite features and I ended up riding with the VIRB mounted to my bars for most of my tests just so I could utilize the screen for speed and distance updates. The screen also works great as a viewfinder for the camera, perfect for setting up fixed shots and taking stills on the trail.

I found the mounting brackets to be very solid and adjustable to virtually any angle I needed to get my shots.

The Garmin VIRB Elite ($399 MSRP) totally surprised me. It’s an excellent camera with a raft of features that competes well with all the others on the market today and not only that, it packs a GPS in for good measure. The rugged case, color screen, and easy-to-use controls make the VIRB an excellent choice for mountain bikers looking to document their trail exploits all over the planet!

I LOVE the idea of an automatic record feature to record downhills… nice to not have to stop to set the camera before ripping away! And the not having to get off the bike for a quick feature photo (or pull out your phone) is a sweet feature as well. Sounds like a pretty sweet all around unit!