“Five Ten” is a name that has a personality all its own. Once you evoke that name, visions of your favorite rider doing the seemingly impossible run though your head… that, and the shoes he wears. Yes, Five Ten is a pretty well-known brand for extreme sports. With a firm foot hold in the climbing and freeride mountain bike markets, the new Freerider VXi Element mountain bike shoe builds on their history of excellence. 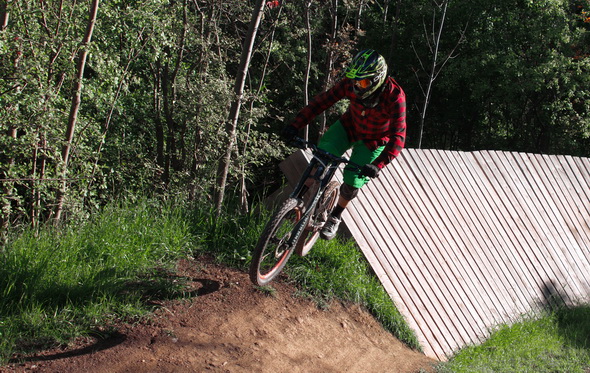 The new Freerider VXi Element mountain bike shoe is designed for extended wear, and is good for almost all weather conditions. The DWR (Durable Water Repellent)-treated uppers repel water, and the layer of PUR (polyurethane) foam insulation doubles as a wicking agent and toe warmer. Underneath, the VXi uses Mi6 Stealth rubber. This new compound of rubber has the ability to generate a high amount of friction over smooth surfaces, compared to other rubber.

The shoe features a new, lower-profile pattern, which is slick in the area around the ball of the foot, much like a racing tire. The toe and heel, on the other hand, use a familiar Stealth pattern. The reasoning is that the center section of the shoe allows for the pins of the pedal to dig in, giving you unprecedented amounts of grip when compared to a shoe with full tread.

The Freerider VXi Elements are sold in half-sizes from size 3-12, and then full sizes in 13,and 14.

Construction consists of a low-cut, lace-up shoe with a pretty solid heel cup. The shoe provides plenty of cushion on the sole for walking around, but they’re stiff enough to put some decent power down on the pedals.

Having used Five Ten mountain bike shoes extensively in the past, I had some high expectations for the VXi Elements. Out of the box, you can tell these are very sticky. I have worked with racing tires in the past that haven’t felt as sticky! I was half-expecting to need some kind of release agent to get these off the pedals.

As a flat pedal shoe is concerned, the soles worked superbly! They do, in fact, grip as if you were clipped in. I personally love the super-solid feel the VXi Elements provided. The sole had enough give to slightly curve over the pedal, but not to the point where I felt as if I was losing the pedaling platform: definitely a happy medium.

I have used these shoes in all weather conditions, even slick slimy clay mud. I gotta say, they did well, considering their near-slick appearance. But to be honest, they slipped like every other shoe in the wet stuff… but in general, they were great when it came time for some hike-a-bike.

I find myself trying hard not to use the Elements as an everyday shoe. I always worry about wearing out the soles unnecessarily, but so far, so good. 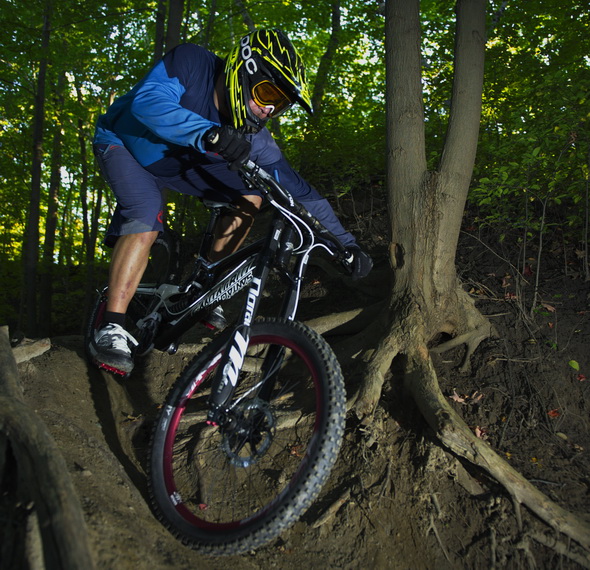 Over the course of my review, I am happy to say that not a stitch came loose on the uppers, despite rocks and roots trying their best to cause  damage. Considering the fantastic performance and grip of the soles as well, if you’re looking for low-cut skate-style shoes for shredding on flat pedals in all weather conditions, be sure to check out the Freerider VXi Elements.

Many thanks to the folks at Five Ten for sending down the shoes for review!

I love these shoes feels like i’m glued to the pedals and they are definitely weather resistant.

like a lot of people (I’m sure) I have ridden several 5.10 shoes over the years. I wear 5.10 climbing shoes as well. Love them. Love the company. Great products. I eagerly purchased these new FreeRiders as soon as I heard about them. But I have to respectfully disagree with the reviewer about the flat section of sole sticking to the pedals. In my experience, I have had better luck with my feet staying in contact with the pedals with the fully-dot-treaded soles like the Impact or Spitfire. I love the new fit of the Freerider and the stiffer pedaling platform, but my feet are popping off my pedals with these shoes (especially in colder autumn temps) much more frequently than with my older 5.10 shoes. I would kill for a pair of Freerider shoes with a fully-treaded sole.

I agree with stwolf. I think the grip level is actually sub-par on the VXi. And forget hiking in them if it’s damp….slippery on all kinds of surfaces!
The shoe fit initially FEELS better than previous 5.10 offerings, but the sole is a tad stiffer than I would like. I also had extensive ankle rub for the first week or so of riding until they broke in some. I still get hot spots on the balls/arches of my feet occasionally, especially on faster/longer trail rides.

Construction quality is top-notch, I’ll give them that. Durability looks to be excellent as well. But, I was stoked to give 5.10s a try and now I think I’m going to go back to the Teva Links. IMO that a better shoe for me.

I have to strongly agree with you here, the grip level with these VXi’s are definitely sub-par. They truly suck when walking on wet trail, as they slip and slide all over the place. Even on smoother surface as well! I like the feel of them and they definitely hold strong to the pedals while shredding, but besides that, I careless for them with exceptions of being much lighter than the High Impacts. They really do not offer any where near the form of ankle protection as the mid and high impacts, and are very stiff as well. I am going back to my High Impacts and will only use these for the dedicated DJ’s and concrete jungle.

Again shoes are a personal thing and depending on arch and width of your foot these all have to be taken into account.

Regarding stwolf’s comment.. These shoes work best with pedals that use a sharp pin…I used Saint pedals and Twenty6 predators..

Yeah, I’ve heard a sharp pin pedal is better…I run DMR V8’s which are a set screw….they played nicely with the Teva sole. I may try them on different pedals to see if that helps with the grip and foot burning.

I have mg1 pedals and they really seam to stick into the pins well. compared to the shoes I wore before it was a huge difference

I’m having good success with the Five Ten, Camp IV shoes for biking with flat pedals on my Wellgo MG1 pedals. They have a more aggressive sticky tread. They provide good grip on the pedals and for hike a biking or hiking. Also provide good support. Costs a little more but worth it for the hiking part. On my second pair with many hundreds of hours in that model.