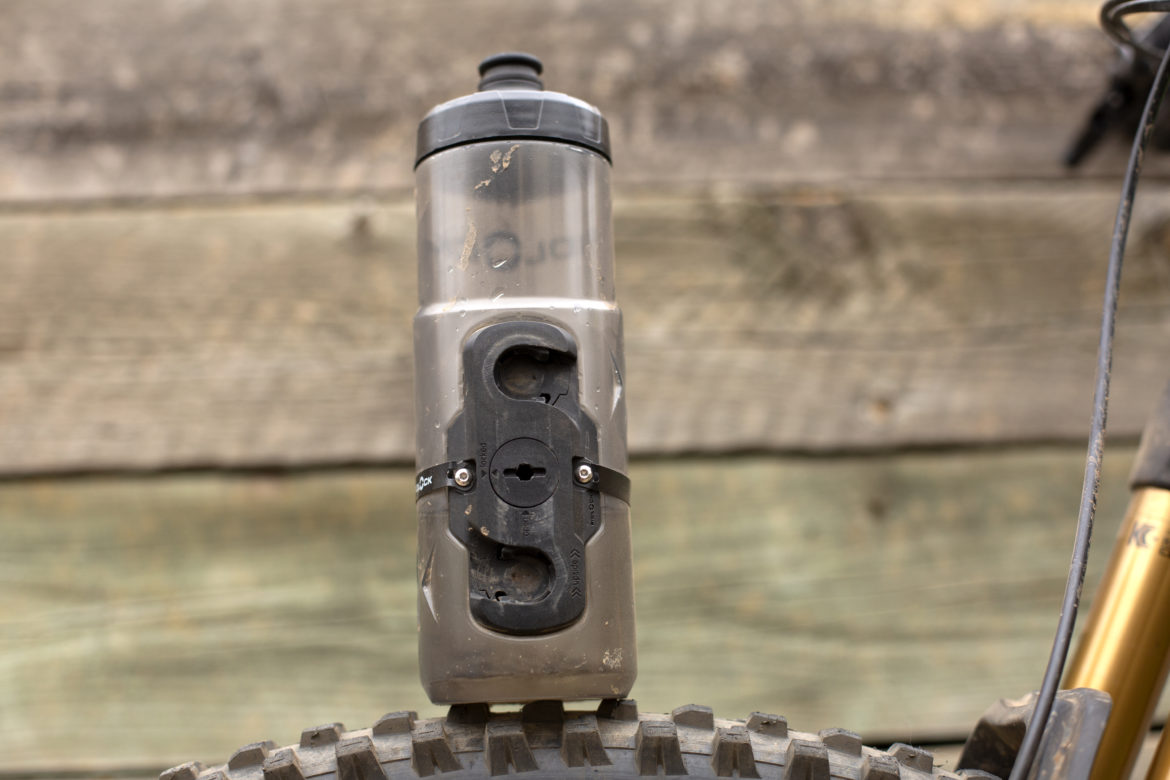 Everyone has different preferences and abilities when it comes to carrying water on the trail. Some have bottle cages on their bikes, some don’t. Some wear fanny packs, and others rock a full hydration pack.

While most of the industry has heard that riders want a bottle cage on their bike and inside the frame, there are still some frames that don’t have a cage mount for whatever reason.

The German brand Fidlock has a solution for folks who want to carry water on their bike, or add to their water-carrying capacity.

Fidlock have been making magnetic accessories like magnetic buckles for helmet straps and magnetic clasps for other items for a little while now. The technology has allowed them to explore what’s possible for carrying items on the bike.

As someone who has had a frame that doesn’t work with a normal sized bottle cage and bottle, I gained interest in the Fidlock products.  I don’t always enjoy riding with a pack, and I often want to take more water with me than my fanny pack allows. 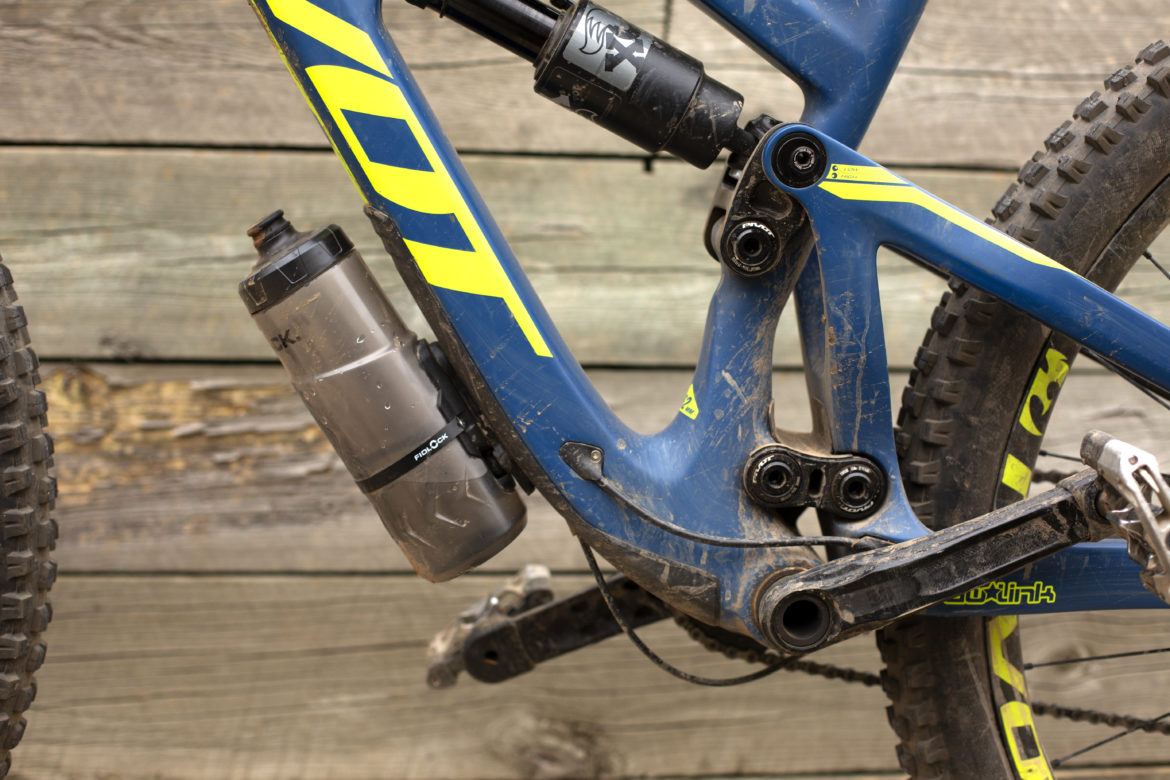 The Fidlock Bottle Twist basically eliminates the need for a water bottle cage, but does limit the type of bottle riders can pack.

It comes in either a 15oz or 20oz bottle and both work the same way. A magnetic base plate attaches to a standard water bottle cage mount. Untwist the bottle to release, and snap the bottle onto the mounts to re-attach.

The system is easy to use and surprisingly stable. I have yet to lose a bottle because it shook off, despite riding some pretty technical and fast trails.

The only downside of the Bottle Twist is that the mount makes the bottle a bit more rigid and you can’t squeeze the bottle to drink water as hard as you can with a normal bottle.

The Fidlock Boa bottle carry is an interesting one. It mounts onto a normal Fidlock magnetic base mount (pictured above) which attaches to a water bottle cage mount, and allows riders to carry any bottle that will fit in it.

It snugs up well, like any Boa strap, and then snaps onto the Fidlock base mount. With the Boa connector, you can leave the same bottle on as long as you want, or rotate the bottle on each ride. Just release the Boa, throw a new bottle in it. Snap it to the base plate, and untwist to access when on the trail.

The Boa carrier worked better than I expected, at first. I had no concerns with my bottle coming out of the Boa strap, or off of the Fidlock base mount. I recently rode the South Boundary trail in New Mexico and hooked up another bottle of water on the Fidlock Boa mount for the 25+ mile ride.

Unfortunately, for my current test bike, the Pivot Firebird 29, the bottle mount is located under the downtube, so that’s where the bottle and base mount went. The final segment of the South Boundary trail is a two-mile stretch with 2,000 feet of descending, which means it’s steep, technical, fast, and filled with rocks. I stopped for a minute at one point to wait for my girlfriend. When she showed up a minute later, she said, “Sorry, I stopped to get your bottle.”

I looked down under my downtube and the Boa mount was gone. The snaps on it completely broke, leaving me unable to attach the bottle. This was unfortunate since the Boa mount is the priciest of the Fidlock products. I would still recommend it, but not on the downtube if buyers have a choice, as it’s the dirtiest, and most impact-prone area on the frame. I have ridden other trails with Fidlock bottles in the same spot and they’ve survived, so it’s kind of a matter of chance. 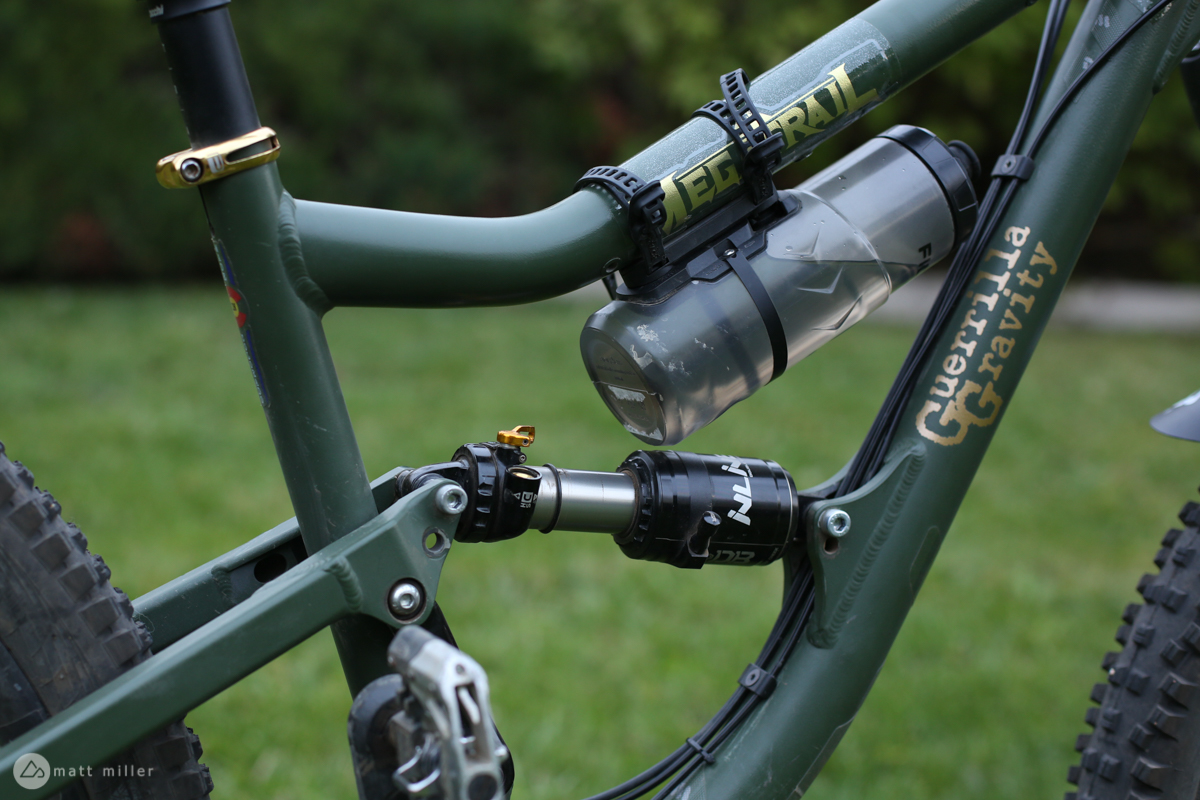 I was excited about the strap-on Fidlock because I haven’t been able to easily accommodate a water bottle on my small-sized Guerrilla Gravity bike, particularly inside the frame.

The straps are snug and secure and once on, don’t slide up or down the frame. I first hooked it up to the downtube on my bike, but moved it inside the frame because drinking water out of a cap that’s covered with mud and small rocks is kind of awful.

At Interbike, Fidlock displayed a bike with the strap-on version on top of the top-tube. This is also an option. 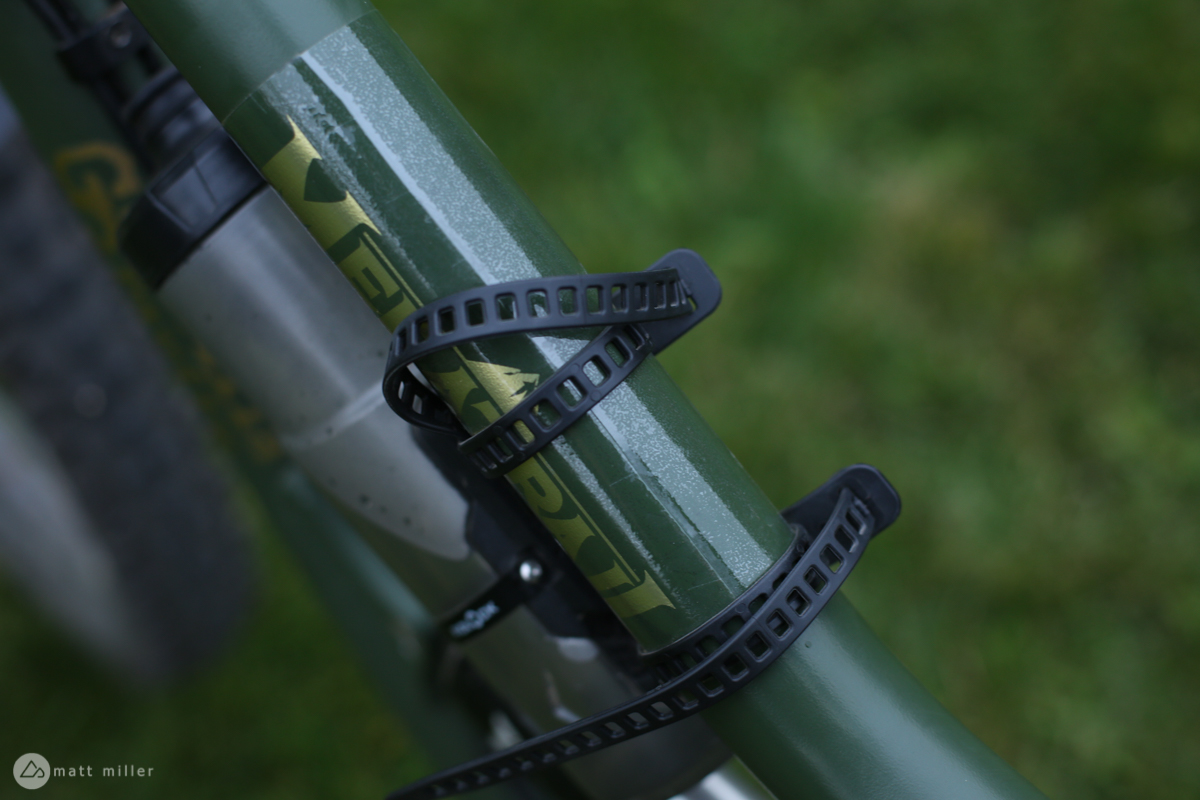 It’s not the most aesthetic answer to bringing hydration, as the rubber straps wrap around the frame, and in my case the logo, but I’m willing to make the sacrifice since I’d rather it be there than on my back.

I do wish that the straps had a loop to secure the excess length. Riders can cut off the excess, but it might eliminate the option of moving the mount to a different spot on the frame or a thicker-tubed bike. 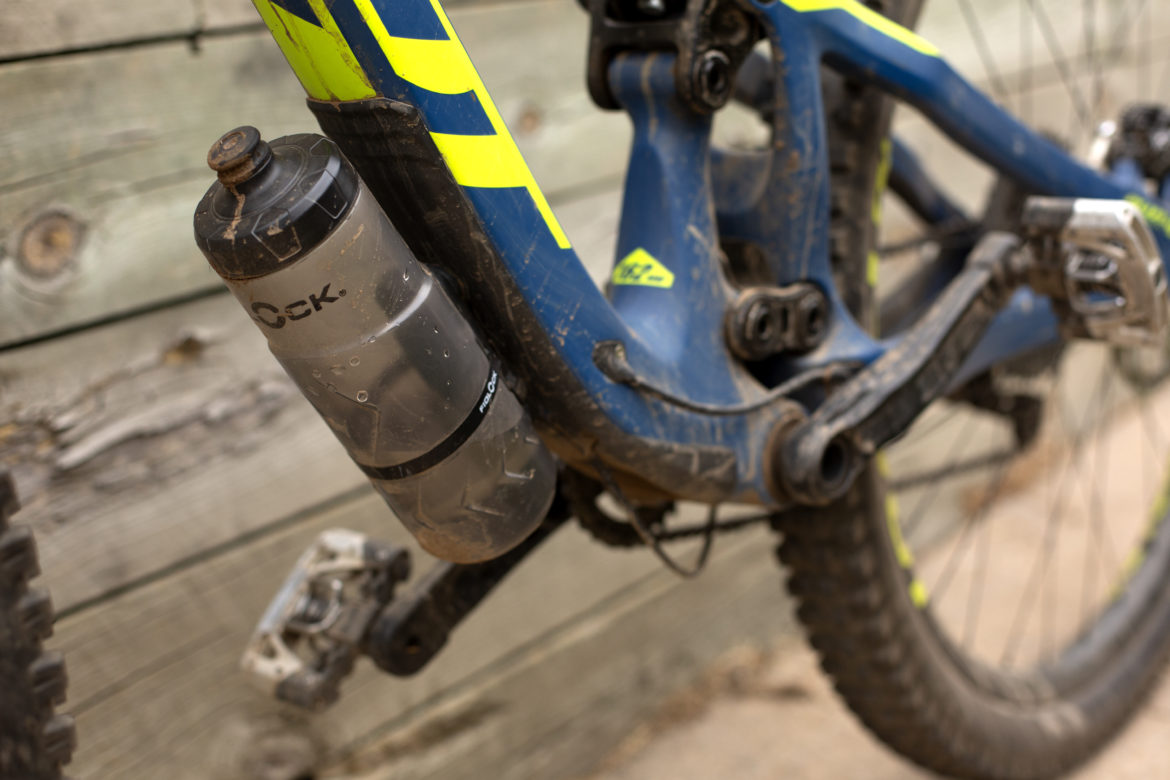 Fidlock have some innovative solutions for hydration and bringing along other items as well. They also make a magnetic saddle bag that’s strap-free. I’d recommend the products as an answer to pack a water on a bike where mounting a bottle has been an issue, or to eliminate an unsightly cage. My only suggestion is to mount it somewhere other than the bottom of the downtube if possible.

Thanks to Fidlock for providing these items for review.

Gear
2021 Stash-Gadget Mashup: Where Can't We Hide Gear on the...
Gear
Review: Hydrapak Bishop 12L
Gear
How to Choose a Hydration Pack for Mountain Biking
Gear
We Taste Tested 10 Sports Drinks to Determine Which Ones...