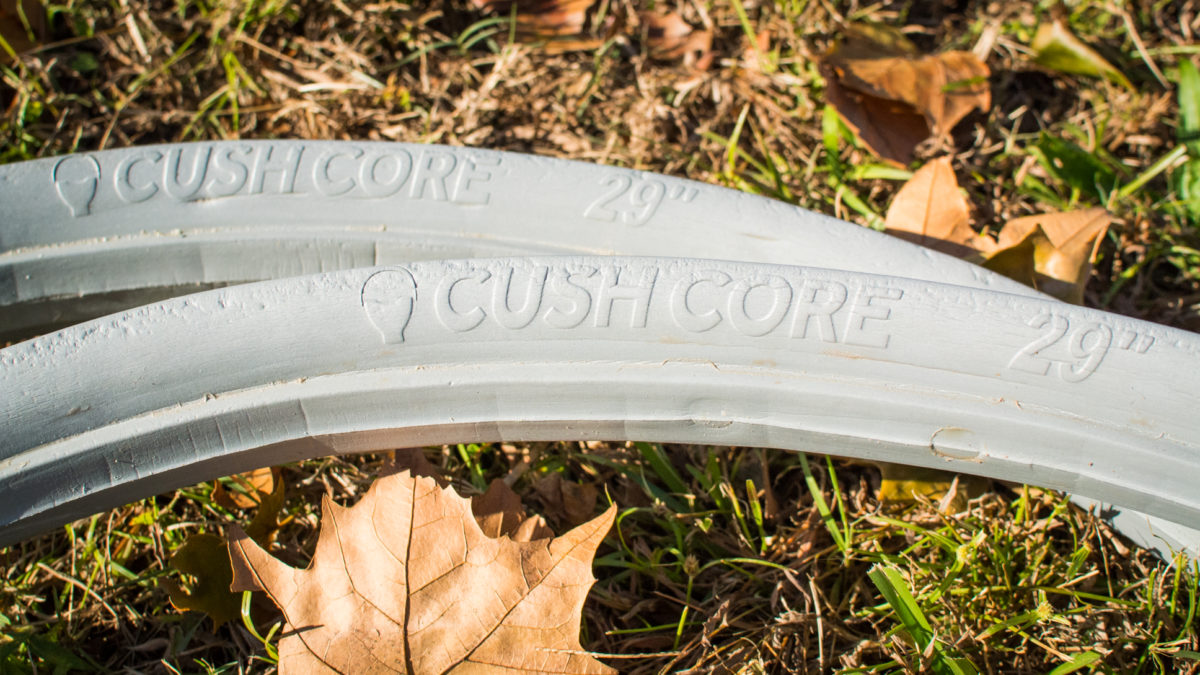 Anyone with experience in off-road motorsports is likely familiar with tire inserts, but for many mountain bikers, they’re a new concept. Their most basic function is to help protect the tire and rim from damage caused by impacts or trail obstacles. CushCore claims their inserts offer additional benefits above and beyond just tire/rim protection. These include: shock absorption, superior cornering, reduced rolling resistance, run flat capability, and the ability to use lighter rims and tires.

Can a seemingly simple piece of foam really do all that? I spent the last six months trying to find out.

I tested the 29er version of CushCore, but it’s also available for 27.5″ wheels. The inserts fit rims with internal widths from 22-35mm and work with tires between 2.1″ and 2.5″. After talking to CushCore at Interbike, I learned that additional sizes for 26″, 27.5+, and cross/gravel are coming soon. A complete set ($149) includes two foam inserts and two specially-designed tubeless Presta valves. Single tire inserts are $76 each.

CushCore uses a special, low density, durable foam that is waterproof and sealant compatible. Claimed weight for the 29″ size is 260g each, although both of mine came in slightly heavier at 269g apiece. For reference, a typical mid-weight 29er tube weighs 200-220g, depending on the brand.

Removing the inserts from the box, it’s apparent they aren’t glorified pool noodles. First thing, they have a unique shape: narrow at the bottom to fit into the rim channel and flaring out from there, reaching halfway up a tire’s sidewall. The top of the insert is slightly concave. Secondly, they’re huge — much larger than I anticipated — taking up roughly half of the space inside a tire.

CushCore’s main claim is that their inserts create an Inner-Tire Suspension System®. The insert acts as a damper while the remaining volume is the spring, or “tunable air pocket” as CushCore calls it.

Wooh boy, these CushCore inserts are not easy to mount. I might have the grip strength of Sylvester Stallone in Over the Top, but I had to walk away from my first mounting attempt. I was using a fresh set of WTB tires which have tight beads, so that wasn’t helping, but after a half-hour struggle, I was on the verge of losing my shit. The inserts themselves are large and not as squishy as you might expect, so you really have to summon all your strength to get the last little bit of bead over the rim.

However, after installing and removing the inserts numerous times, I learned some things I’ll share with you. In their installation video, CushCore recommends putting the insert on the rim first and then adding the tire. I found this unnecessarily complicates things. Instead, get one tire bead on the rim and then stuff the CushCore inside the tire. Get the other bead on as far as you can. When it gets tight, go back around the tire and tuck both beads down into the rim channel. CushCore says to do this with a tire lever, but I had better luck doing it by hand. Also, they don’t emphasize the importance of this step enough. They should bold, underline, and italicize this step in 72-point font.

What I found worked best was grabbing the tire with both hands, pulling the CushCore insert away from the rim channel, while simultaneously stuffing the beads into the channel. If it sounds tricky, that’s because it is. But once you get the hang of the technique it’s a quick, tool-free installation.

Eventually I had the install dialed, but removal wasn’t always as easy. Remember that run flat capability CushCore claims? Yeah, it’s legit. The lower part of the insert holds the beads firmly to the rim and doesn’t want to let go. That’s awesome should you flat during a race run, but it’s less awesome for swapping tires or doing trailside repairs.

I used CushCore on a Stan’s Arch Mk3 wheelset with a 26mm internal width. Before running CushCore, I was using a Maxxis 29×2.3″ High Roller II front tire and a 29×2.3″ Minion SS rear tire. Complete wheel (rotors, cassette, etc.) weights with this setup were 2,040g for the front and 2,440g for the rear. One of their claims is that the system allows you to run lighter weight tires, so I thought I’d test that first. I used a set of WTB’s new XC-race Ranger 29×2.25″ tires. Doing so produced wheel weights of 2,030g front and 2,570g rear. Even using lighter weight and lighter duty tires, I gained 120g. Feeling a bit skeptical, I set out for a ride on some in town trails.

Immediately, I felt the shock absorption at work. The bike felt calmer and smoother over all surfaces, but particularly so on trails littered with roots. Impacts were significantly deadened once I started smacking things at speed.

As for the “superior cornering,” there is truth to that, too. Even with the lighter tires, I ran pressures in the 20-22 PSI range — lower than I would run without the inserts. I nailed turns at speed, however, I still sensed tire roll. I never burped one of the Rangers with CushCore installed, but the sensation was there. Swapping to tires with thicker casings solved this issue altogether.

Those low pressures allowed the tire casings to easily conform to roots and rocks on the trail. Traction was appreciably better because of this. On a trail I ride regularly there’s an awkward, off-camber 90° left turn leading straight into a steep, rocky climb. Despite dozens of attempts, I’ve only cleaned the maneuver a handful of times. During my first ride with CushCore, I handily cleaned the line.

The video below shows some of the tomfoolery you can get away with when running CushCore:

In six months of using CushCore, I have yet to flat or puncture (knocks wood). Generally, I don’t flat frequently — perhaps a couple times a year — but when I do, it’s usually from pinch flatting the casing on a sharp impact. And I had plenty of those this summer. One notable incident occurred when I wheelied through a creek at full speed and smashed my rear wheel directly into a rooty, foot-high bank on the other side. It was a wince-inducing impact. I thought for sure I had ruined the tire but nope, nothing. The tire was just fine, and to top it off, I made it up the climb out of the creek! Later I discovered dents in the rim and the foam from the encounter.

I have a tendency to ride further over the back wheel and I almost never flat my front. Considering this, I stopped running CushCore in my front wheel after a few months as the extra weight wasn’t worth it. If you’re toying with the idea of running CushCore, maybe start with a single insert and see what you think. Or buy a set and use them on two back wheels. 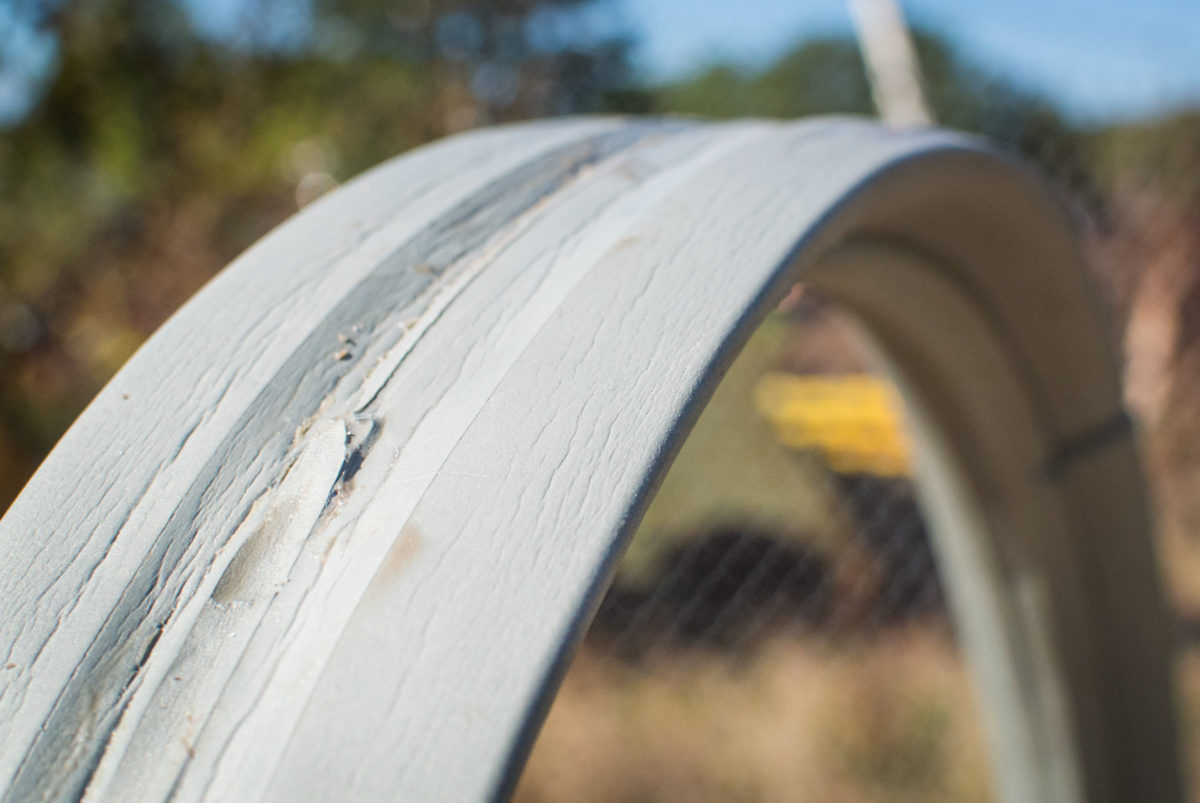 CushCore is a quality product that delivers on all its claims…. well, at least the ones I could test. Without an objective way to compare rolling resistance, I’ll leave that one alone. It’s true you can run lighter weight tires, but as I noted, you may still experience tire roll. Also, when dealing with tires, those with larger lugs tend to come with heavier casings. Basically, it’s a choice between a lightweight casing with small knobs or a heavy casing with large knobs. When using CushCore, a tire with a light casing and large knobs would be ideal, if you can find it.

Weight weenies or riders in less onerous terrain may find the heft and price of CushCore a tough pill to swallow. But for riders who regularly ruin tires and rims (ahem, Greg) or gravity racers looking for a peace of mind that will allow them to finish a run on a flat, CushCore is unquestionably worth the investment.

Thanks to CushCore for providing their inserts for review.

Did you notice a drop in ride quality or performance going to rear only after riding front and rear?

Running it rear only didn’t give quite the same ride quality as front and rear, but it wasn’t enough of a difference for me to put it back in.

Would you say running heavy tires and cushcore inserts would still be appealing to some riders? My trails have some sharp rocks but I worry I’ll be getting too heavy with these inserts. I’m going to be using them on a hardtail which seems like an ideal application, to help smoothen out the sharp hits without worrying too much about denting rims.

I could see that. Especially if you live somewhere rugged. Tires are expensive to replace! A heavy tire with the insert is going to be tough to pedal, but the plus side is you’ll get strong AF!