Fat bikes were everywhere at the Sea Otter Classic this year! Sure, fat bikes make for a cushy cruise around the dusty venue at Laguna Seca, but there were many fat bikes built for more than just cruising. 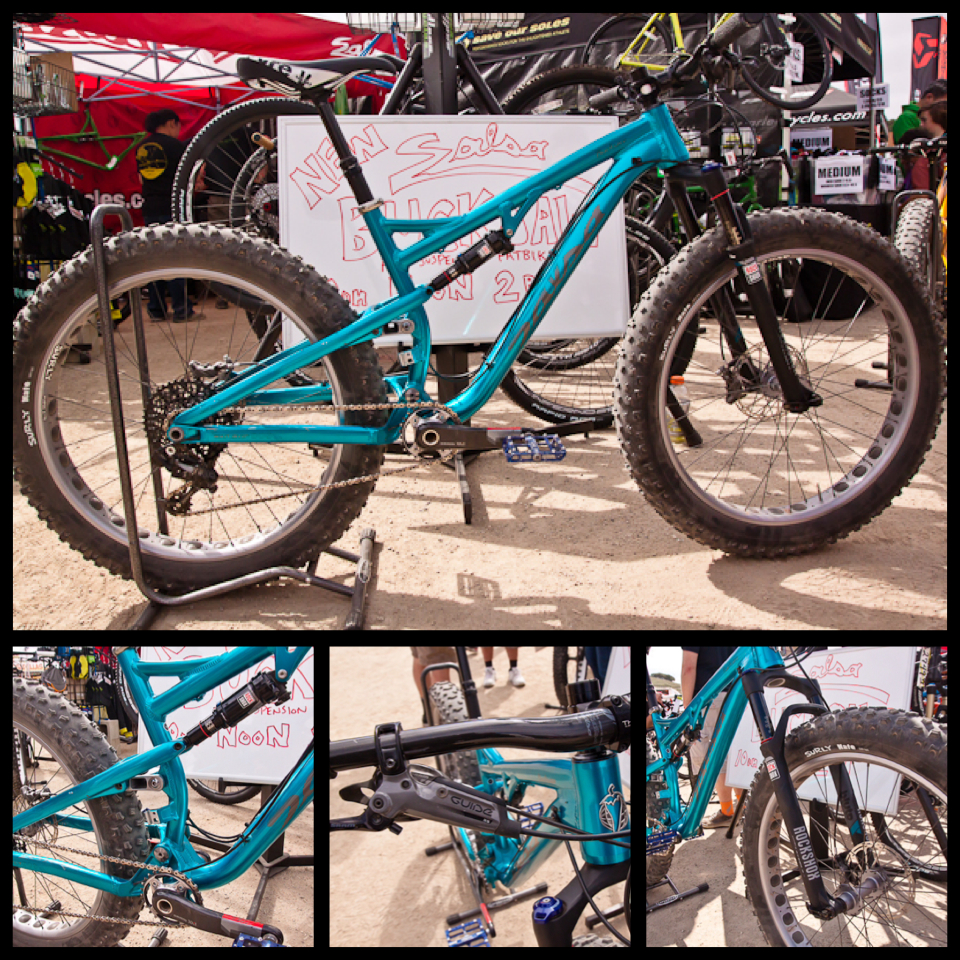 The newly-released Salsa Bucksaw made its debut at Sea Otter. This first-ever production full suspension fat bike is redefining fat biking, and quite possibly mountain biking in general. The rear suspension makes the Bucksaw a capable machine on many more technical trails than a hardtail fat bike. MSRP $4,999 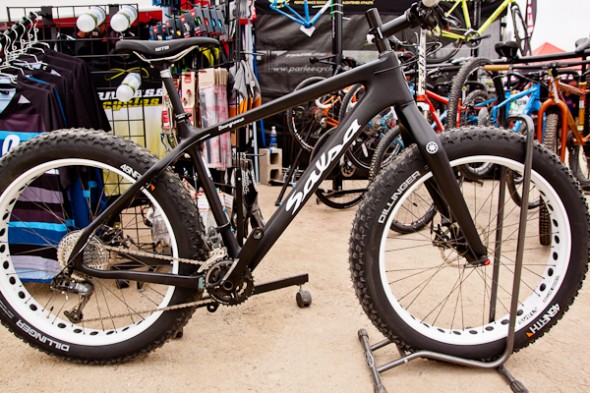 Salsa is no stranger to fat biking. The Beargrease Carbon above is a good choice for fat bike racing. MSRP $3,499 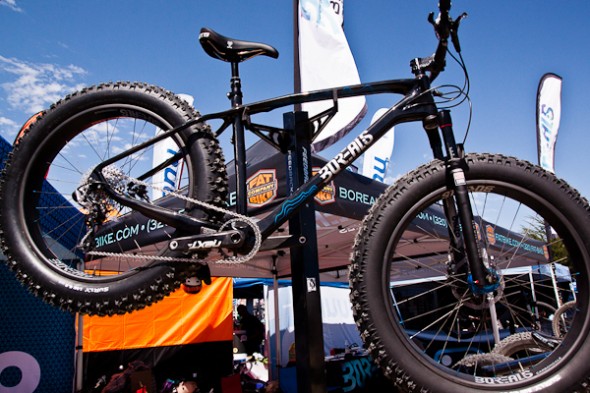 The Borealis Echo is another carbon fat bike, and like the Salsa Bucksaw, sports the new Rockshox Bluto fat bike fork. And with a dropper seat post, the Echo is definitely trail-worthy, and built for a variety of trails and riding styles.  MSRP $2,649 Frame/Fork 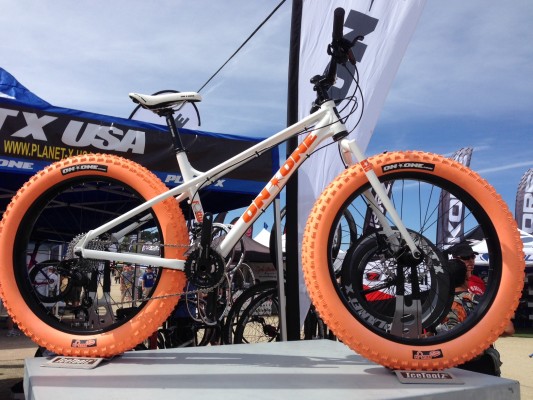 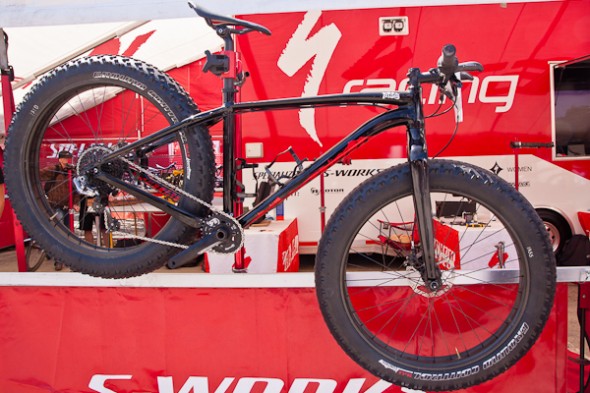 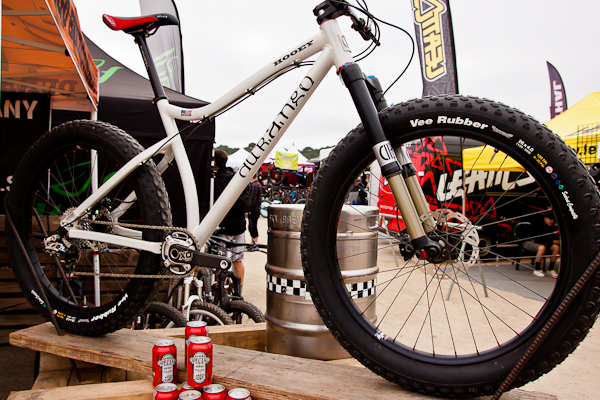 Durango Bike Company is relatively new to the mountain bike scene. Handmade in their solar-powered factory in Durango, CO, the DBC Hooey is a truly unique bike.  With custom-bent tubing, an adjustable 115mm inverted fork, and weighing under 30lbs, the Hooey is built for much more than just winter touring.  MSRP $4,495 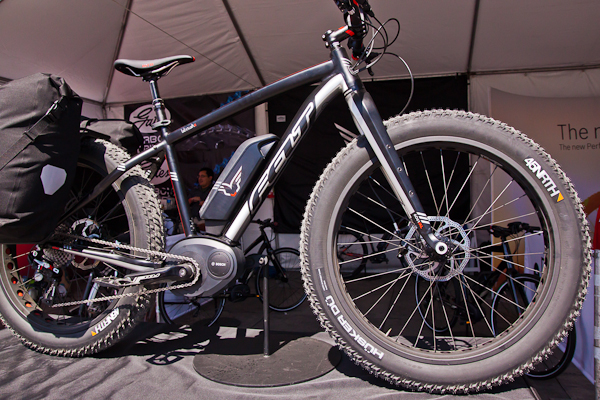 As if fat bikes weren’t already kind of cheating on the trails (ok, I admit I have ridden exactly 0, that’s ZERO, fat bikes!) there’s Felt’s electric fat bike, appropriately named the LebowskE. And rumor has it, Felt has a non-electric version of this bike called, you guessed it, the Dude!

Being here in Atlanta, I initially thought fat biking was simply a novelty, and have been pleasantly surprised to find companies trying to create fat bikes with ride qualities comparable to XC and trail bikes.  The question is, will you trade your current mountain bike in for a fat bike?

I really like the paint job on the Bucksaw.

Got any more info on that inverted fork?

sorry dustin, all i know is it is custom made by durango bike co. ill contact the owner who i spoke with at soc and see what else he can tell us 🙂

I have a feeling they built this themselves because there weren’t really any other options on the market at the time. For that reason, I suspect this fork may not last. 🙂

Well, Lulu has been making inverted custom forks for about 2 years now (China) and both 11:nine and Carver fatbike companies have been rebranding them and using them. However, at $875 they are pricer than the Bluto, and I think more people would trust Rockshox over Lulu for reliability.

BTW: the Carver TransFat is the first production full suspension fat bike (though smaller quantities) although several custom jobs have appeared over the years.

For some reason, I thought Carver was a custom builder? Guess I was wrong?

I have a Wren inverted fork. I love it! https://buynow.wrensports.com/products/copy-of-wren-aluminum-fat-bike-suspension-fork