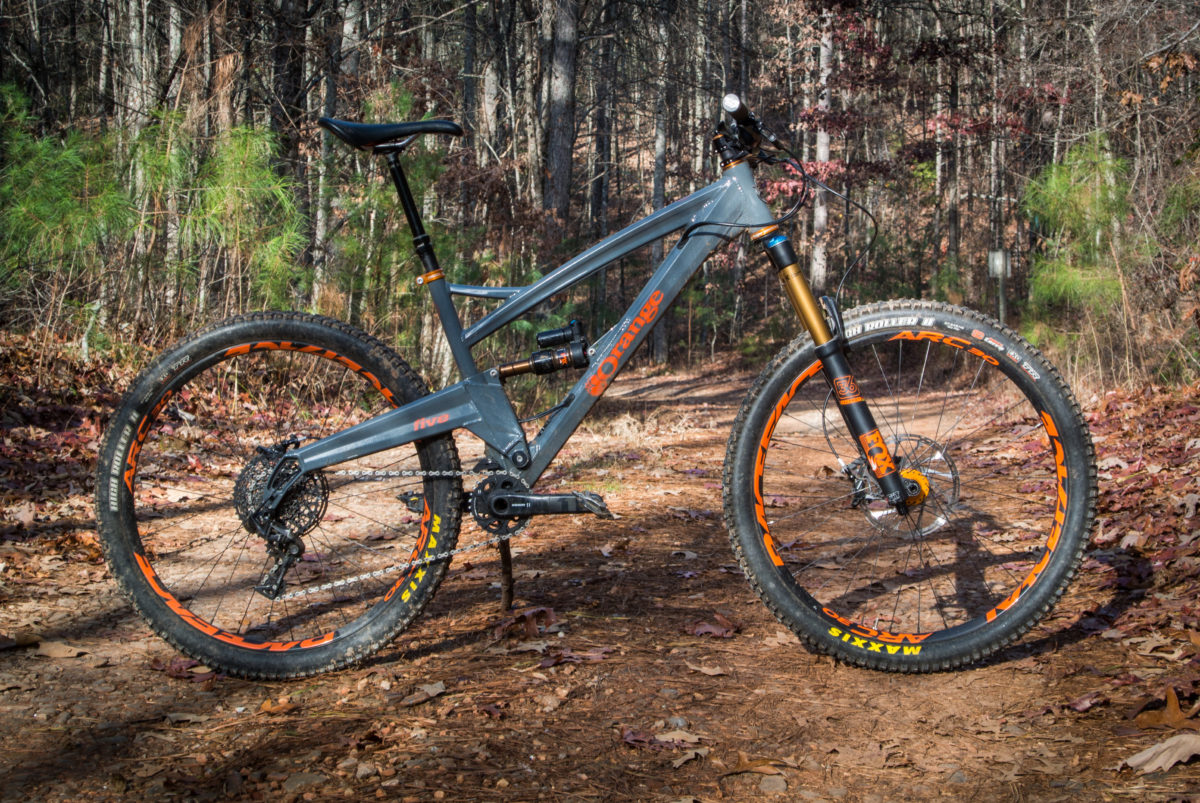 A few months back Jeff and I headed up to Charlotte, North Carolina, for the first annual Fall Cyclofest. One of the brands we visited at the show was Orange Mountain Bikes–a company with a storied history in the UK, but no presence in the US, until now. Jeff and I got out for a quick ride on a pair of Oranges, and based on that brief–but promising–experience, we lined up a long-term tester.

Carl Martens, who owns Aventuron–Orange Mountain Bikes’ US distributor–set me up with their trail bike, simply named the “Five.” With an unseasonably warm and dry winter on tap, I’ve had plenty of opportunities to get out on the Five, both on in-town rips and trips further afield. In all, I’ve ridden it nearly 350 miles over the past two months.

The Five slots into the Orange line between the shorter travel Four, and the enduro-able Alpine 6. As you may have surmised, the name Five refers to the amount of rear travel–as in 5-inches, or 140mm, if you like. Orange designed the bike around a 150mm travel fork, which puts the headtube at a nicely raked out 66 degrees. Other key numbers include 426mm chainstays, 333mm BB height, a 457mm reach (size large), and a 74-degree seat tube angle–full geometry is below.

My baseline for the geometry and fit of a trail bike is my personal steed, a 2014 Kona Process 153. One of the reasons I enjoy that bike so much is because of how comfortable it is for me at 6 feet tall, with long arms and longish legs. Comparing geo charts with the Five, the two are remarkably close in many aspects, despite the Five sporting a bit less travel at both ends. It’s no surprise, then, that I felt right at home aboard the Orange from the first pedal stroke. 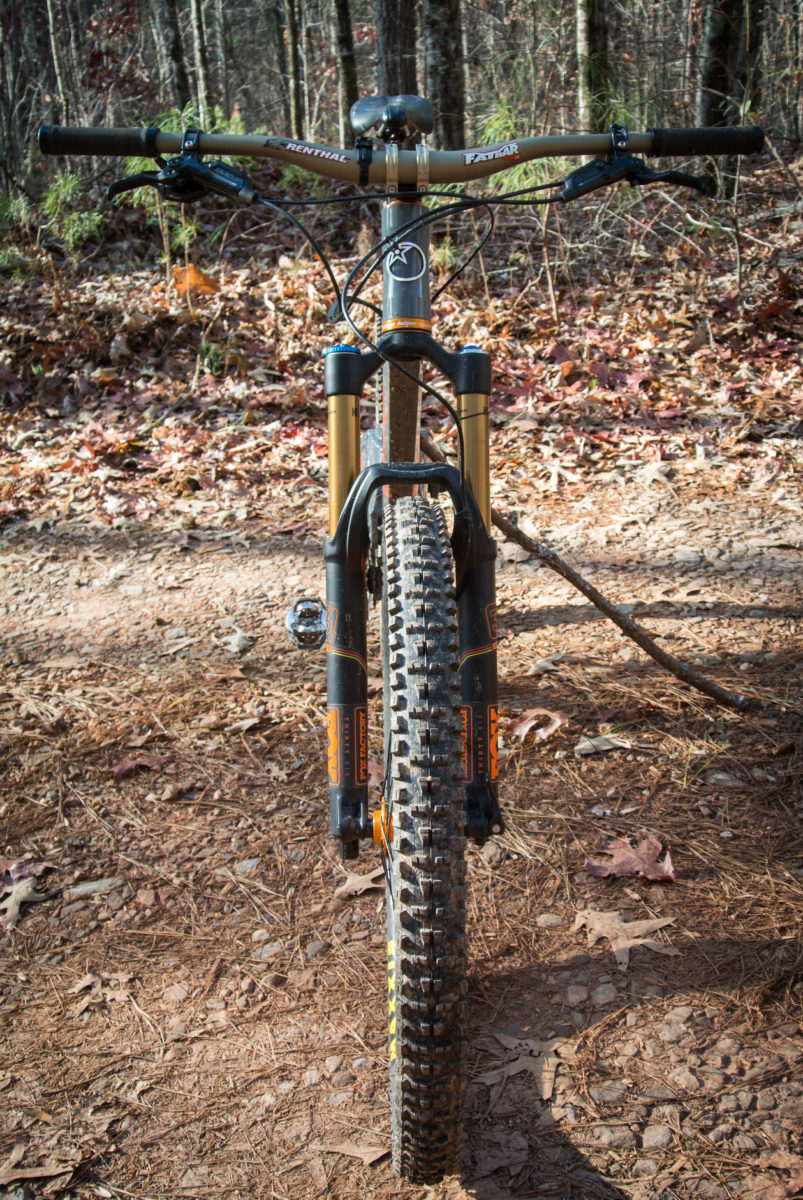 The Orange Five comes in four different spec levels. In ascending order: S, Pro, RS, and Factory. However, customers are free to upgrade certain components to suit their tastes. This particular bike started out as an RS build, but it had numerous upgrades that brought it very near to the Factory build. Key amongst these upgrades would be the suspension components, wheels, and Hope finishing kit. The price as tested is just a few six packs short of $7,000, while the full-on Factory build is $7,275. Differences between the bike I rode and the Factory build come down to the drivetrain and handlebar–11-speed vs. 12-speed and aluminum vs. carbon.

When I first received the bike, I figured I’d just pump the shock up to the right pressure and be ready to shred. But after reaching the max pressure rating of the shock–300 PSI–the sag was still around 50%. After some Googling and a trip to Fox’s website–which is actually quite helpful–I learned that in order to equalize the pressure in the negative air chamber, you must slowly and repeatedly cycle the shock through 25% of its travel as you add pressure. This needs to be done every 10 PSI, which is tedious, particularly when you weigh 200lbs and need to run fairly high pressure. However, unless you’re frequently letting all the air out of your shock, it’s a one time pain in the ass.

As for the remainder of the spec, it doesn’t get much more dialed than this. Like other current generation Fox forks, the 36 was simply superb. At first, I questioned the “need” for a 36mm stanchioned fork at 150mm of travel, but it’s so plush and precise, it’s worth the slight weight penalty over the Fox 34 or RockShox Pike. The SRAM 1x drivetrain did what SRAM’s drivetrains typically do… that’s to say it went about its business without fuss or need for adjustment. I appreciated the stock 30T chainring on long days in the saddle and on technical climbs. While the bike’s 30-pound weight is in line with current trail bikes, it ain’t light by any means.

Other spec highlights include the abundance of Hope and Renthal components. Like Orange, both of these brands manufacture their components in the UK. Hope parts included their latest Pro 4 hubs, headset, and seatpost clamp, all anodized in orange, natch. Renthal supplies the bars, stem, and grips, all of which I thoroughly enjoyed–I would happily bolt this cockpit to my personal bike. The Ultra Tacky Renthal grips lived up to their name, providing my hands with tree frog-like traction, even gloveless. The blingy orange Hope bits, matching orange decals on the frame and rims, and Renthal parts give the impression that the bike was built from the frame up by a bike nerd like myself.

Orange chose to route the cables and hoses internally. All of them enter the frame just behind the headtube before a quick external jaunt to the rear swingarm. From there the rear derailleur cable and brake hose run inside the swingarm to their destinations. Personally, internal routing isn’t a selling point for me, but I’m happy to report that it was absolutely silent. In fact, unless coasting the Five was delightfully quiet. No creaks, no clangs.

My time aboard the Orange Five was free from any major troubles. I did manage to put a substantial ding in the rear RaceFace rim on a hairball descent when I tagged a sizable rock hidden beneath the leaves. However, I don’t think another aluminum rim would have fared any better. The only other “issue” I encountered was a Reverb reluctant to return to full travel during a ride with sub-freezing temps. Once things warmed back up, the Reverb operated as normal.

Single pivot bikes are often overlooked at the high end of the market because they’re seen as dated technology. In reality, many companies still employ single pivot suspension platforms, but they add a rocker link to drive the shock. One example of this approach is Scott’s bikes, and they won four gold medals between the Olympics and World Championships in 2016. After spending considerable time behind the bars of the Five, I can tell you dismissing this bike out of hand because of its simple suspension would be a massive mistake.

Likely the biggest upside to the single pivot suspension platform lies in its simplicity. With the swingarm arrangement that Orange has chosen, there are just two bearings in the frame. Once the bearings wear out, replacement can be done in a snap and for minimal cost. After spending over five hours servicing the 10 bearings in my Kona frame last winter, I can tell you I’d rather spend that extra time on the trail as opposed to in the shop.

Under heavy braking, the rear suspension did struggle to stay active. That said, the learning curve to adapt to this characteristic was shallow. Within a couple rides I had changed when, where, and how I was braking–earlier, before, and harder–to compensate. Doing so allowed me to stay off the brakes in chunky sections to maintain traction. The only other area where the single pivot bike had drawbacks was on steep, technical climbs, which produced a noticeable tug at the pedals. The solution? Maintain momentum. Staying on the gas helped immensely in this regard. Even so, thanks to the comfortable pedalling position and low gearing, I could crawl up sharp pitches by carefully picking my lines.

When it was time to get down, the Five could boogie with the best of them. The massive aluminum frame and swingarm, along with the burly component spec, created a bike that rewarded riding at the ragged edge. I was able to find the bottom of the shock on more than one occasion, but the progressive spring rate at the end of the stroke kept it from being harsh. With its spirited ride, the Five had me seeking out every drop, gap, and trailside feature I could put beneath its tires.

As mentioned in the geometry section, due to similarities between my personal bike and the Five, the large Orange was ideal for my frame. In terms of ride feel, the Five felt stiff, capable, and indestructible. Despite this rugged nature, the Five was surprisingly agile. It quickly responded to inputs, easily gained speed, and actually rewarded sprinting with forward momentum instead of bobbing up and down. Despite being long, low, and slack, the Five remains snappy, sporty, and playful. Job well done.

Orange didn’t try to build a “quiver-killer” or “category-blurring” bike with the Five. It is, unapologetically, a trail bike. Perhaps due to this singular focus, Orange has created one damn fine mountain bike. If I evaluated bikes sheerly on their fun factor, the Orange Five would have just reset the bar, knocking my previous favorite–the Ibis Mojo 3–down a peg.

With its stout frame and impeccable spec, the Five is a serious bike for the rider that doesn’t take themselves too seriously out on the trail.

Cool! That sound so much like my old Mountain Cycle Fury, which has a very similar suspension and behavior. That tug at the pedals is due to the anti-squat designed in by placement of the swingarm pivot. Looking at the side view in the photo you can see that the pivot is above the line of the chain about an inch; that gives chain leverage to rotate the swingarm down when you pedal. Conversely, when the swingarm moves up going over a bump, it gives the swingarm leverage to pull back on the pedals—aka pedal jack. If the pivot had been placed below the chain line, the leverage would work in the opposite direction, compressing the suspension with pedal force—aka pedal bob—which causes loss of efficiency. A well placed pivot is the key to efficiency and active suspension. This is true regardless of whether the pivot location is actual (single pivot design) or virtual (Horst link, VPP, DW-link, CVA, Maestro, etc). And as for brake jack, the best mechanical cure is a full-floating brake arm as used on motocross bikes. Foes used to do that; but that solution comes with a weight penalty, and the few extra ounces seems to be too much to sell.

Thanks for the comment! Although many companies would have you believe that their bikes can do it all – climb like an XC bike and descend like a DH bike – the fact is there’s always going to be some compromise between pedaling efficiency and suspension action. Some designs do get near these claims, DW-Link bikes are a personal favorite, but as I mentioned in the review, the particular traits of the Five were easy to adapt to.

Garbage spec on drivetrain and brakes for 7k. I’d want to pay the extra 200 for sure. Or is it a typo for price the lower cost build?

Garbage? I wouldn’t call it that, but I agree, if I was dropping $7k I’d come up with the extra $300 to get the Eagle drivetrain.

Keep in mind this started as an RS build, but had a bunch of upgrades piled on. Pricing for the straight RS build is $5,725.

Single pivot sure aint dead yet! Loving mine…..

The bike has soul and such a cool functional uniqueness, which kind of got lost in the price.

Finnaly how many PSI needed to DPX ?