If you’ve never heard of Foundry Cycles before, don’t be ashamed: they’re one of the newest bike companies around. But if you have heard of them, I wouldn’t be surprised! Officially launched in October 2011, Foundry is just over a year old but has already made a splash in the mountain bike industry, especially in the online MTB world.

To start things off with a bang, Foundry decided to sponsor a group of “Tradesmen” whose job is to ride Foundry products and spread the word about the bike brand. This is a marketing tactic that Specialized and Airborne Bicycles have already used to varying degrees of success, but what made the Tradesmen search process much more interesting is that while the company chose a pool of finalists, the final selection was crowd-sourced to the internet at large. People from across the nation and around the world were able to vote and decide who became a Tradesman–and who did not. This crowd involvement early on has helped Foundry make a name for themselves very quickly.

But involving the mountain biking masses is only one part of the equation. If the bikes don’t stand up to scrutiny, then any company will fall. That’s where this test comes in. 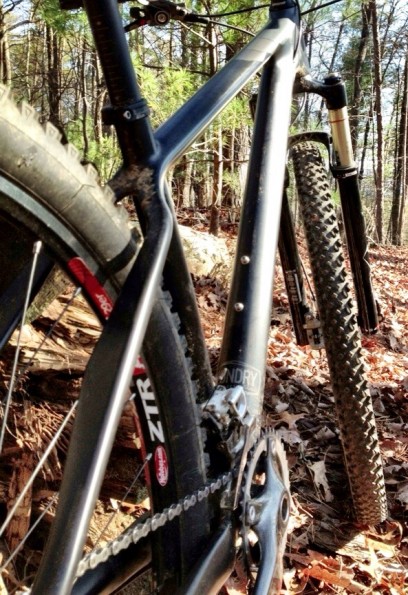 The Broadaxe frame is available in only one material: carbon. In fact, all of Foundry’s bikes are made out of carbon. Yeah, a company with the name “foundry” selling carbon bikes is a little counter-intuitive, but hang with me here.

The Broadaxe is designed to be incredibly stiff thanks to the tapered headtube, massive tube junction around the bottom bracket, rear 12mm thru axle design, and short 438mm chainstays. The directionally-shaped seatstays are designed to be vertically compliant and laterally rigid while still transferring maximum energy to the rear wheel.

The headtube angle on my size medium (17″) test bike is a pretty standard 71.5 degrees, and seattube angle is 74 degrees.

This lightweight carbon frame is available clothed in three different build kits. The most affordable build rings up at $2,950, the middle is $3,699, and the most expensive is $5,799.

According to Foundry’s website, the most expensive build features a 100mm Rock Shox SID WC fork with thru axle, Stans Crest No Tube rims with DT Swiss hubs for wheels, a full Shimano XTR 2×10 drivetrain with Shadow Plus rear derailleur, and Shimano XTR brakes (among other things).

The bike I received for review must be wearing last year’s build kit, because it came decked out with a full SRAM XX drivetrain, XX brakes, and X9 hubs. (The fork is still a Rock Shox SID and the rims are still Stans.) Due to a manufacturing defect on that run of SRAM XX rear derailleurs, I had to swap the derailleur out for a SRAM Type 2 X0 early on in the test.

With the build kit listed above, which is slightly different (but close to) the high-end build kit for 2013, the Broadaxe tipped the bike scale at a scant 22.3 lbs without pedals. With my heavy, cheap SPD pedals installed, it weighed almost exactly a pound more. Running lighter pedals could definitely save you some weight. 🙂

While the Broadaxe is already crazy light for a big wheeled mountain bike, there is a lot of weight that could still be shed off of this bike. To start, the rotational weight could be significantly reduced by taking out the tubes. 29er tubes weigh quite a bit, and going tubeless can save you about a half a pound of rotational weight. 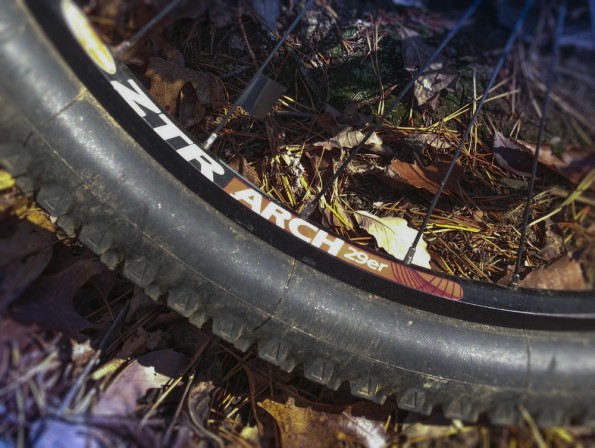 Next, these wheels are nice–but they’re still made out of metal. Stepping up to a carbon wheelset would make things even lighter.

For those crazies out there who don’t like suspension, slapping a carbon fork on this rig would drop a couple of pounds off the front end in no time.

Finally, there are random bits here and there that seem out of place on this carbon wonder bike. The bars are super comfy, light carbon bars from Whiskey Parts, but the stem and seatpost are both made of aluminum. Also, the seat that came stock on my rig is a weird no-name seat that, while very comfortable, looks pretty heavy. (Stock seat on the new high-end build kit is the WTB Silverado Race SL.)

While $5,600-$5,800 is a bundle of cash to spend up front on a bike, if you still have some change left over after the initial purchase, there are still lots of shiny bits you could purchase for this bike!

If you want to find out how the Foundry Broadaxe actually handles on the trail, you’re going to have to wait for the final review. But here’s a sneak peak: It’s Fast!!

Many thanks to Foundry Cycles for sending the Broadaxe down for review!

Gear
Why are Good Rain Jackets so Expensive? We had to...
Progression
How to Stay Strong in the Off-Season, Even if You're...
Gear
Best Mountain Bike Gifts Under $50
Trails
New Tech Trail Coming to AR, Big Grant to NC...
Subscribe
Login
Please login to comment
16 Comments
Most Voted
Newest Oldest
Inline Feedbacks
View all comments

The 12mm rear axle is a nice touch–all new bikes should have one of these.

I wonder why they put tubed tires on a set of Stan’s rims?

Only two things bug me about the design…Not that I am an Engineer, but..Clamping steel around a tube of carbon? Why not just mold in a tab for the “E” type FD’s out there..Also I am looking at the abrupt change in material sizing from the lower stays to the chainstays..It screams stress riser…But again I am not an Engineer..

@Element22, Because these are made by Hongfu in China and they aren’t going to make new molds just for a different FD mount. 😀

Also, I’m calling BS on the tubes weighing a pound, I checked a couple of tubes that I have personally used and I find 165 grams (5.8 oz) for Michelin Airstop Butyl tubes and 140 grams (4.9 oz) for Kenda tubes. So subtracting 4 oz per tire for the sealant that you would need for a typical 29er tubeless setup, you’d save a grand total of 102 grams (3.6 oz) by converting to tubeless. (using the Michelin tubes as our baseline, if replacing Kenda tubes, the savings is only 25 grams)
Don’t get me wrong, tubeless is a great upgrade for a number of reasons .. massive weight savings just isn’t one of them. I agree with Jeff though … why ship a tubeless wheel with tubes? Is it because the sealant could dry up while the bike sits in inventory?

I’ve got some 29er Michelin tires in to review, and they sent a pair of tubes (Airstop Butyl) along with them, they were 220g each. 29er Specialized tubes I’ve weighed were around 240g each if I remember correctly.

I’ve weighed the same 29er wheel/tire set up with a tube and again with 2 scoops of sealant (no tube) and there’s about 100g weight difference, so 200g for both wheels, about half a pound.

Did a little more searching, and fatbike tubes come in right around a pound each: 15.8 oz for a Surly and 16.2 oz for a Sunlight. 😉

@Dustin Gaddis, I got those same tires and tubes for testing .. Michelin’s website says 165 grams if they are the Airstop Butyl.

Sorry, my bad on the tube weights.

How are you liking the geometry of the bike so far, compared to say, the Airborne Goblin Alloy?

It’s not too radically different. HT angle is the same, but chainstays are shorter on the Broadaxe which lends itself to a more nimble ride–and I’ve been enjoying that! Also, I like the cockpit setup more on the Foundry… I think mainly because of the wide bars, which, of course, you could easily throw a set of wide bars on the airborne.

My eys perked up when I saw the entry price at under 3 grand for carbon. Granted that’s hard tail, and with upgradeiteis I’d temped up and up to better components,and still think I needed a double squish, 😉 but still think that’s a great price point.