As long-time readers may recall, I was a member of the Airborne Flight Crew in 2010 and 2011. As a member of the Crew, we got free bikes from Airborne to ride and review in exchange for spreading honest reviews via our blogs and social media outlets. At the end of 2011, I officially stepped down from the Crew in order to be a more impartial journalist for Singletracks.com.

Still, one of the main bikes in my stable is the original version of the Airborne Goblin, and I use that bike to test many of the products and components I get in for review. When I heard that Airborne was releasing the latest rendition of the Goblin this fall, I knew that I had to check out the updates!

I’m pleased to announce that I was one of the first people to throw my leg over a production Goblin, so the scoop doesn’t get any fresher than this: 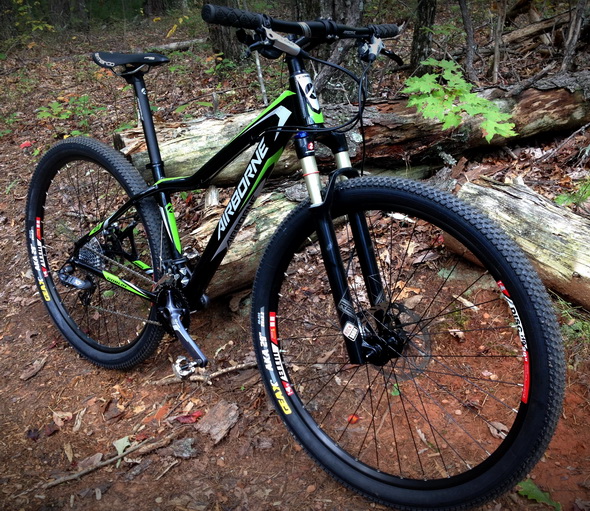 Since I have put thousands of miles on the first version of the Goblin, I can’t help but reference all the changes Airborne has made from the previous version. For reference, click here to read my final review of Goblin v1.0. (Note: in this article I will use v1.0 and v2.0 to refer to the older and newer versions of the Goblin. This is not Airborne’s official designation, but since Airborne does not designate model years, this is a convention that I am adopting simply to tell the two editions apart for the purposes of this article.)

Since I was still a member of the Flight Crew when v1.0 was released and when v2.0 was in development, I got to chime in on what I thought would make the Goblin even better, and I’m glad to see that some of my recommendations were implemented in v2.0. One of the biggest changes I pushed for was a bump in the front suspension from 80mm to 100mm of travel. In my opinion, there’s not much point to running less than 100mm of front suspension unless you strictly ride on absolutely buff singletrack. And if the trails are that smooth, why not just drop the suspension all together? I guess the higher-ups at Airborne agreed with me, and the Goblin now sports a 100mm RockShox Reba RL 29 Dual Air fork with lockout. 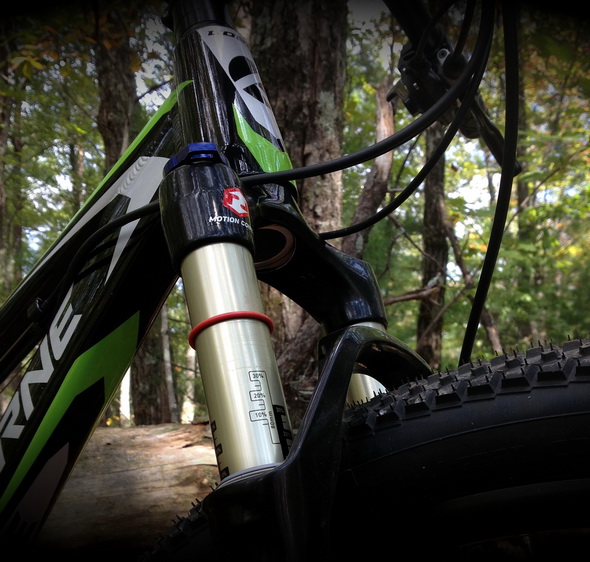 Third, the front rotor was bumped up a size from 160mm to 180mm. This helps improve overall stopping power and reduces brake fade which, again, is really important if you tend to ride aggressively (as I do). I thought the 160mm rotors on v1.0 were passable, but a 180mm rotor up front is much more confidence-inspiring. 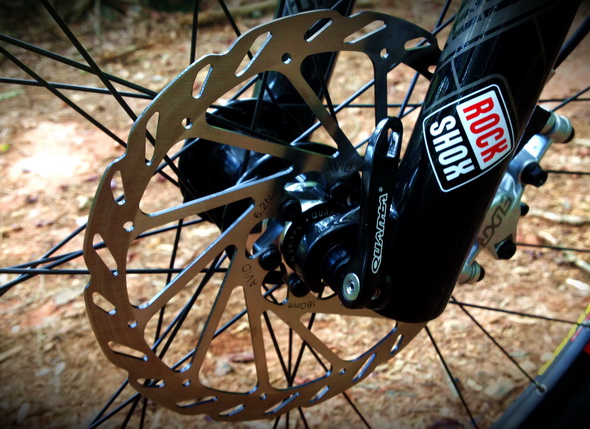 Fourth, the toptube on the 16″ model (tested) is bent near where it meets the seattube, in order to provide extra standover clearance for short riders. At 5′ 7″ or so in height, the previous edition of the 16″ Goblin fit me perfectly. The v2.0 fits great as well, with the sloping toptube simply providing additional clearance and peace of mind. However, I could easily see this new toptube making the Goblin accessible to riders of much shorter stature than I. 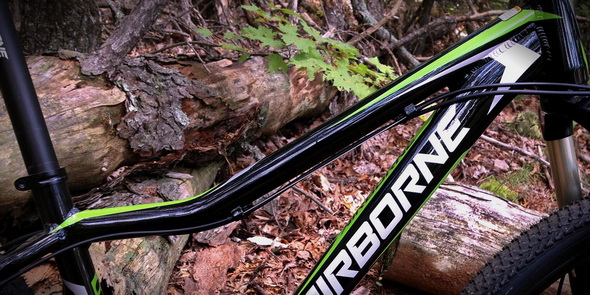 Fifth, the rear chainstays offer increased mud clearance… or, alternatively, the opportunity to run a wider rear tire. This chainstay clearance was another small gripe that I had with the previous Goblin, since I’m a big fan of big tires. Lately, I’ve gotten used to pairing a narrow rear tire with a fattie up front for an acceptable balance between speed and control, so it is no longer a big deal-breaker for me on either bike. However, knowing that there is extra clearance back there if I ever want or need it is a plus.

On the topic of tires, the sixth change is the switch from Kenda Small Block 8s to Geax AKA 2.2″ tires, front and rear. Based on my few rides so far, the AKAs perform better than the SB8s, but the AKA still doesn’t have as much bite up front as I would like. If I was keeping this bike for a long period of time, I’d change out the front tire to something a little meatier. This is a personal preference thing, however, and is a very easy upgrade if you decide to do so. As for the rear, the AKA is plenty beefy! 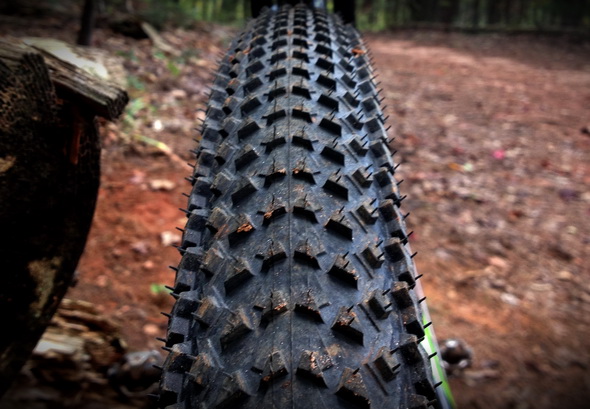 Seventh, the v2.0 SRAM X7 2×10 drivetrain features a little different gearing than v1.0. The 2.0 now sports a 38/24 crank with a 11-36 cassette, whereas v1.0 had a 39/26 crank and a 12-36 cassette. The changes are subtle, but the easier granny gear is definitely noticeable on really steep terrain, and the 11-tooth small cog on the cassette helps keep the gearing up to snuff at high speeds. Bottom line: the new gearing offers a slightly-bigger range.

Finally, the most obvious change visually is the paint job. Airborne basically inverted the color scheme from last year, swapping the green for black and the black for green.

One of the changes that I pushed for but apparently didn’t make it through to this year is a wider bar. In my opinion, the 640mm bar is just too narrow, but I know that many hardcore XC guys will disagree. Since this is a hardtail 29er, I can understand the bar choice, but if you do agree with me, swapping out the stock bar for a longer one is a pretty easy fix.

Airborne intends for all their bikes to be easily assembled right out of the box. I slapped the seat, bars, and front wheel on, and I was almost ready to go. Despite the front derailleur being mounted on the hanger and cabled up, it wasn’t shifting properly right out of the box and took a good bit of tuning to get it there. Still, that is pretty simple maintenance for anyone who has been riding bikes for at least a little while, and is an easy fix if you do decide to take the bike to the shop.

Also, the front end on v2.0 felt significantly higher than the front end on my v1.0. Headtube angles are effectively the same (after factoring in proper sag), so that isn’t the issue. I’m not sure if it is partially a result of the additional suspension up front, or the fact that I’m used to running wider bars, or a combination of the two. Regardless, the stock steerer comes with an ample number of spacers to allow you to fine-tune the fit to your personal preferences. After a little adjustment period, I found the sweet spot for my body and riding style (stem almost slammed, just one spacer below it), and I’ve been tearing it up since!

All signs indicate that this is an excellent mountain bike, and I have already been enjoying my time aboard this rig! I want to write more about my impressions, but you’re going to have to wait for the final review. 😉

What impresses me most is that Airborne has made all of these upgrades over last year’s model, but the MSRP on the Goblin is still just $1,199.95. That’s only a $50 increase over last year, which would’ve been acceptable simply due to increased production costs. Factor in all of the upgrades, and I’m not really sure how Airborne managed it… but they did.

Many thanks to Airborne Bicycles for sending the Goblin down for review.

Trails
Tennessee's Smoky Mountains are Full of Good Trails and Good...
Gear
Are E-bikes Just Mountain Bikes With Motors? We Asked a...
Trails
The 12 Best Mountain Bike Destinations in the USA [2022]
Gear
The Continental Kryptotal Re is More Than a Trail Tire...
Subscribe
Login
Please login to comment
5 Comments
Most Voted
Newest Oldest
Inline Feedbacks
View all comments

AKA tires are bi-directional. Try reversing them to the ‘traction’ direction.

For the fork, I wonder why they didn’t go with the Recon Gold TK to keep the pricepoint, but gain 15MM thru-axle?

Even as a self-professed XC guy, I have gotten really used to my bike’s stock 690mm bar. I think 640 would feel a little on the narrow side for me as well.

It’s actually a good looking bike and to me the upgrades to the frame make sense. If it’s truly a price point bike, buyers will naturally consider upgrades down the line and unlike the fork, you can’t “upgrade” the frame without getting a new bike. 🙂

IDK If I mentioned it in this post (it is mentioned in the final review) but the tubes on the rear triangle are larger on V 2.0 than they were on V 1.0 which further add to rear-end stiffness.

PS Rumor has it that Airborne is going to be releasing an X0 build of the Goblin sometime this winter. I imagine they’ll be using the same frame but just hanging nicer parts on it, but I’m not sure. It’ll be interesting to see how that turns out!

Thanks for the review Greg!

In response to the question regarding the thru-axle, we wanted to have a Reba RL fork on there and knew we couldn’t get both the tapered HT and Maxle on there. We’ve done a lot of ride-testing and have found that the tapered HT adds more to the “point and shoot” feel of the bike than the Maxle, so that’s what we went with. Hope that makes sense!

We’re pretty proud that we were able to make a bike at this pricepoint and spec with a tapered HT/Fork.