Earlier this year I tested the Niner JET 9 Alloy. I found it to be a capable bike, so much so that the rear suspension was able to easily outride the 100mm RockShox SiD spec’d on that bike. After swapping it for a 120mm fork, the bike and I were much happier. Niner has updated their build kits, and is spec’ing 120mm forks on all levels of the JET 9 Carbon .

Niner has worked to keep their bikes attainable by offering frames in various materials–alloy, carbon, or a mix of the two like the JET 9 tested here. The JET 9 Carbon with Niner’s 3-Star XT build costs $800 more ($4,500) than the alloy bike I previously tested with an equivalent build kit. And, the Carbon gets a serious upgrade in the fork department to a 120mm Pike over the 100mm SiD. But I’m getting ahead of myself.

While this is obviously subjective, the Niner looks shit-hot. The carbon front triangle uses huge tubes that are heavily shaped. From the head tube, the top tube arcs down gently until it meets the seat tube brace. Beyond that junction, it drops sharply to blend seamlessly with the seat tube.

I think it’s a beautiful bike. In my opinion, it’s swoopy done right. One thing is for sure–it’s prettier than it’s alloy sibling. 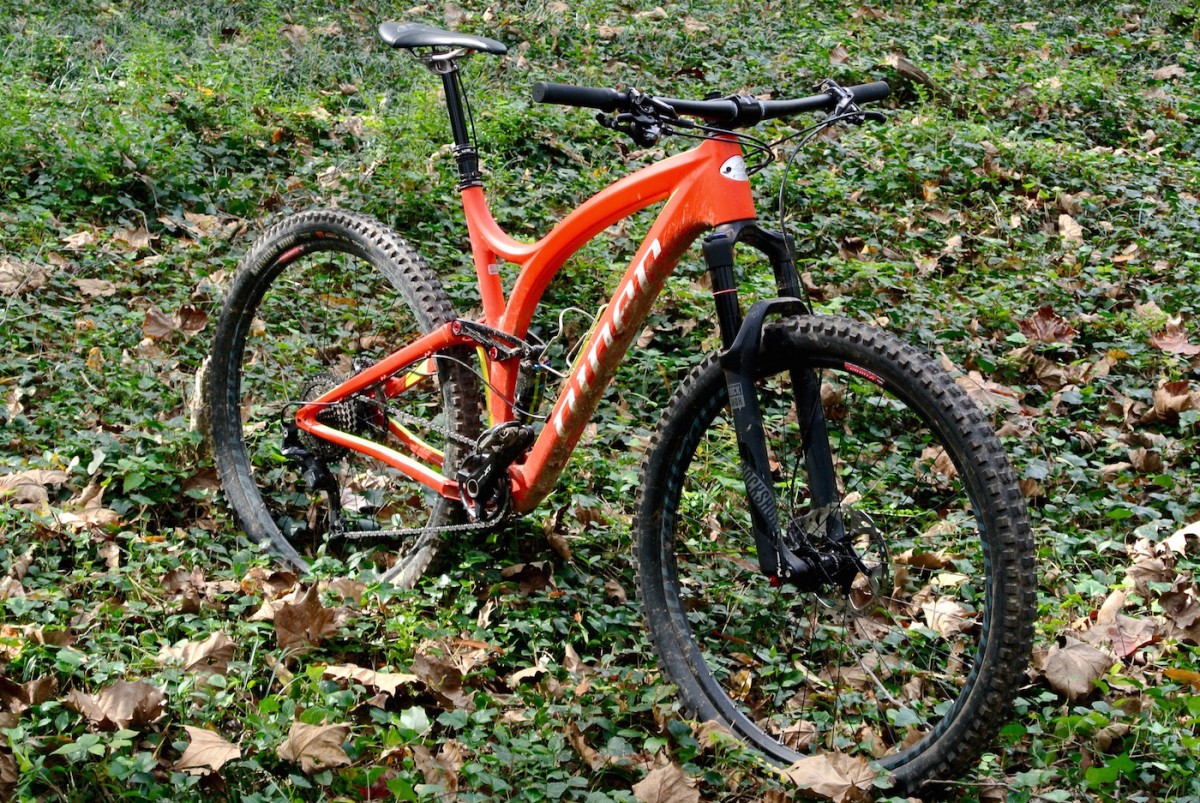 The paint on this bike is kick-ass. Niner sent the Orange/Blaze Yellow and it is BRIGHT! It damn near glows in the dark. The finish is matte, which may make it hard to keep clean, as we’ve found with other bikes in the past. If riding a bike that looks like a road crew’s safety vest isn’t your thing, Niner also offers a Black/Slate Grey color combo. 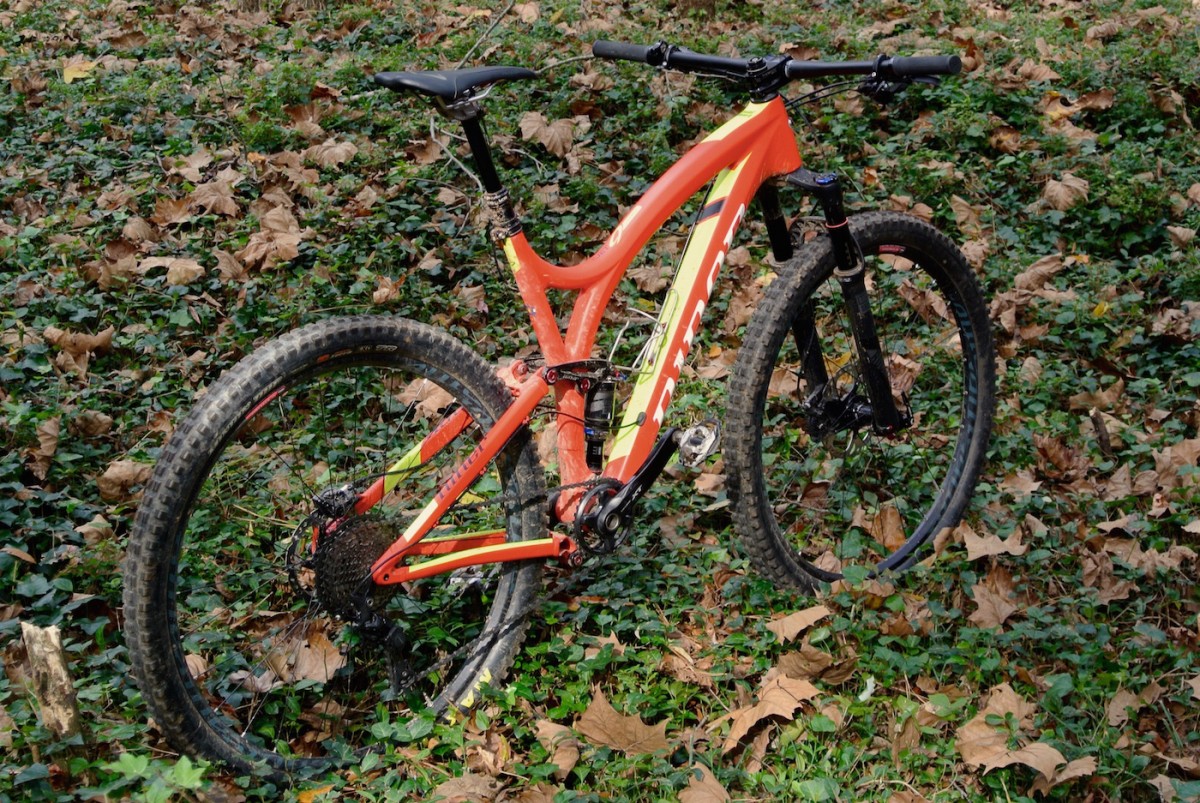 As mentioned above, the JET 9 Carbon uses a mix of carbon and aluminum. The front triangle is carbon, while the rear triangle–chain stays and seat stays–are made from aluminum. Niner also offers a full-carbon Race Day Optimized (RDO) option for the JET 9, but of course, that will come at a premium. For the frame alone, you’ll pay $700 more to get the RDO version.

The top build offered for the JET 9 Carbon is the 3-Star XT build kit. Both 1x and 2x options are offered, and I chose to go with the single ring. The 2x option will run you $200 more since you’re adding a front derailleur, front shifter, and an additional ring. I was excited to see that Niner spec’ed Shimano’s new 11-speed M8000 XT group on this bike. XT has always been a solid performer, but the latest iteration sees some significant improvements over the previous generation. Cranks, ring, rear derailleur, shifter, brakes, rotors (180mm front/160mm rear), cassette, and chain are all Shimano XT.

In the suspension department, the JET 9 Carbon leaves little to be desired. Up front is a 120mm RockShox Pike. Yes, a Pike! Everyone knows how great this fork is, even the more basic RC version spec’d here. The fork uses Boost spacing, which takes the 15mm thru-axle we’re all used to, but adds 10mm to its width. The 29er fork pulls double-duty as a 27.5+ fork, so you could potentially run a 27.5+ wheel and tire if you so desired. It should be noted that the rear of the Niner still uses the more common 142x12mm spacing, not the 148x12mm Boost.

Not as flashy, but just as solid, Niner went with a RockShox Monarch for the shock. Adjustments are simple with just air pressure, rebound, and a 2-position compression switch offered.

One way Niner is able to keep the price of their bikes down is by spec’ing their own branded components. There were a few on the alloy version I tested, and the Carbon has even more. The stem (70mm), bar (780mm), lock-on grips, saddle, headset, and most notably, the wheelset are all Niner-branded. Niner does sell carbon wheelsets aftermarket, but the alloy wheels on this bike appear to only be available as a part of a complete bike, which makes it difficult to find any details on them. The hubs look basic, but stout, and the rims are acceptably wide at 22.5mm internal. After just a few rides, it’s too early to make a judgement call, but so far, so good.

Niner includes a dropper post on the 3-Star build: the KS Dropzone R. I’m not familiar with this particular model from KS, and it seems to be on the less expensive end of their offerings. It’s a cable actuated, externally-routed post. Unfortunately, due to Niner’s suspension and frame design, there is no option for an internally-routed post. That’s a bummer, as the external hose/cable mars the otherwise clean aesthetic of the bike. Looks aside, the Dropzone operates smoothly. However, I’m not keen on the 20mm offset head of the post. To keep a better pedaling position, a zero offset post would be preferable.

On yet another happy note, Niner is now spec’ing Maxxis tires on their complete bikes. Previously, they had been using Schwalbe. This build came with Maxxis Ikon tires–a 2.35″ in the front and a 2.20″ in the rear–setup tubeless out of the box.

Niner has not been quick to jump on the LLS (longer, lower, slacker) bandwagon. The head tube angle (HTA) sits at a steep–by current trends–70.5-degrees with a 120mm fork. To compare that with some other bikes in the same “light trail” category: Specialized’s Camber is 68.5-degrees, Trek’s Fuel has an adjustable HTA between 68.8- and 69.4-degrees, and Kona’s Process 111 hits at 68-degrees.

A steeper HTA does keep the wheelbase in check, and the Niner is the shortest of the bikes mentioned at 1,141mm–even with its lengthy 454mm chainstays. The seat tube is kinked due to the shaping of the front triangle, making the effective angle 73.5-degrees. In reality, it’s even slacker than that with the offset dropper post mentioned above.

Numbers on a page don’t always tell the whole story, though. I was able to confidently take on a variety of terrain during my previous test on the alloy JET 9, and the new Carbon version sports nearly identical geometry.

My first ride on the Niner wasn’t all roses. As soon as I headed out on my neighborhood trails, an awful noise from the front end developed. It happened under the slightest compression, and drove me crazy. Back in my shop, I checked/tightened everything I could think of: brake caliper, rotor bolts, headset. I even lubed the axle and dropouts, thinking it might be coming from the hub and fork interface. All to no avail.

Running out of things to check, I decided to open up the air side of the fork. And there I found the culprit: three of the four RockShox Bottomless Tokens had fallen off, and were banging around inside the fork. All I had to do was screw them back on to the bottom of the air cap. Problem solved.

Niner (mostly) crushed it with the build kit on this bike. If you read my previous review, you know that I changed several things on the alloy bike. Niner themselves made a number of the same changes on the updated builds, but there is one thing I would swap on this bike: the tires.

While I’m generally a big fan of Maxxis tires, the particular Ikons spec’d are a bit wimpy for a bike of this caliber. Both tires are as basic as Maxxis offers–no EXO sidewall protection or fancy compounds. For a rider my size, they aren’t up to the task of hard charging. When I’m pushing the bike into corners or landing off camber, I can feel a substantial amount of sidewall squirm. This leads to a lot of mid-corner correcting.

Also, the small knobs are having a tough time keeping traction with all the trail litter on the ground this time of year. With the stout Pike up front, and other trail-oriented component choices, I can envision many riders swapping out the tires early on. I understand there were probably cost and weight considerations that went into Niner’s decision to spec these tires, but doing so sells short the capabilities of this bike.

Apart from my gripes about the particular tread pattern chosen, my only other concern is getting used to the Shimano XT brakes. When Shimano launched the M780 brakes way back in 2011, they had a very on/off feel. With the M785 update, Shimano had improved modulation, reducing much of that feel. However, these new M8000-level XT stoppers have brutal power with little modulation. Being an Avid/SRAM brake guy on my personal rides, it may just require developing a different technique.

Once I’ve had the opportunity to log some serious miles on the Niner JET 9 Carbon, I’ll be back with a full review. Stay tuned!

I have a 2013 Niner Jet 9 Carbon and the rear carbon subframe triangle got cracked, warranty replace the complete frame but now that reference comes with alloy subframe rear triangle, I do not know if it is a downgrade or an improvement, lets the trails talk…