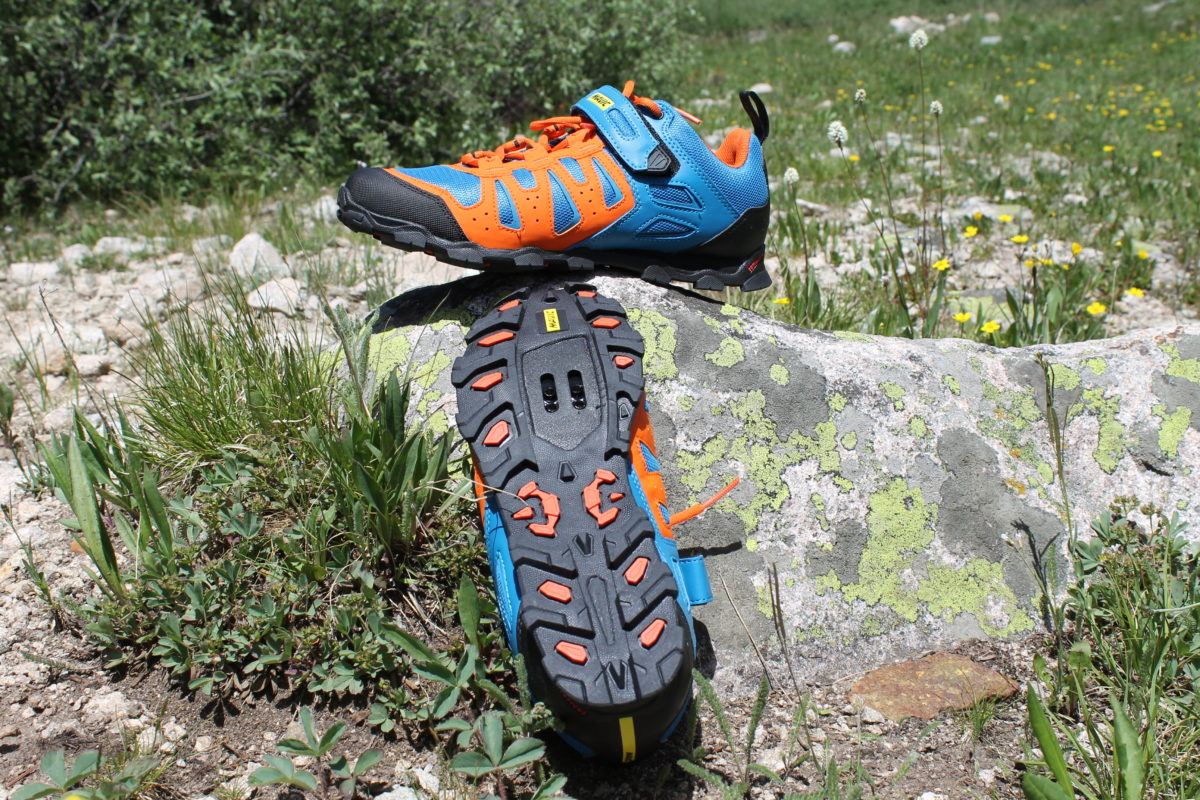 The French brand Mavic jumped on the enduro bandwagon long before many US brands decided it was a thing, and has been creating and selling enduro-specific shoes for years. With that in mind, I decided to review a set of their enduro kicks–the Crossride Elites–figuring these would be the perfect shoes for some challenging mountain biking I had in store this year, including a three-week trip to Europe.

However, the review process didn’t turn out to be nearly as happy go-lucky as I had hoped. 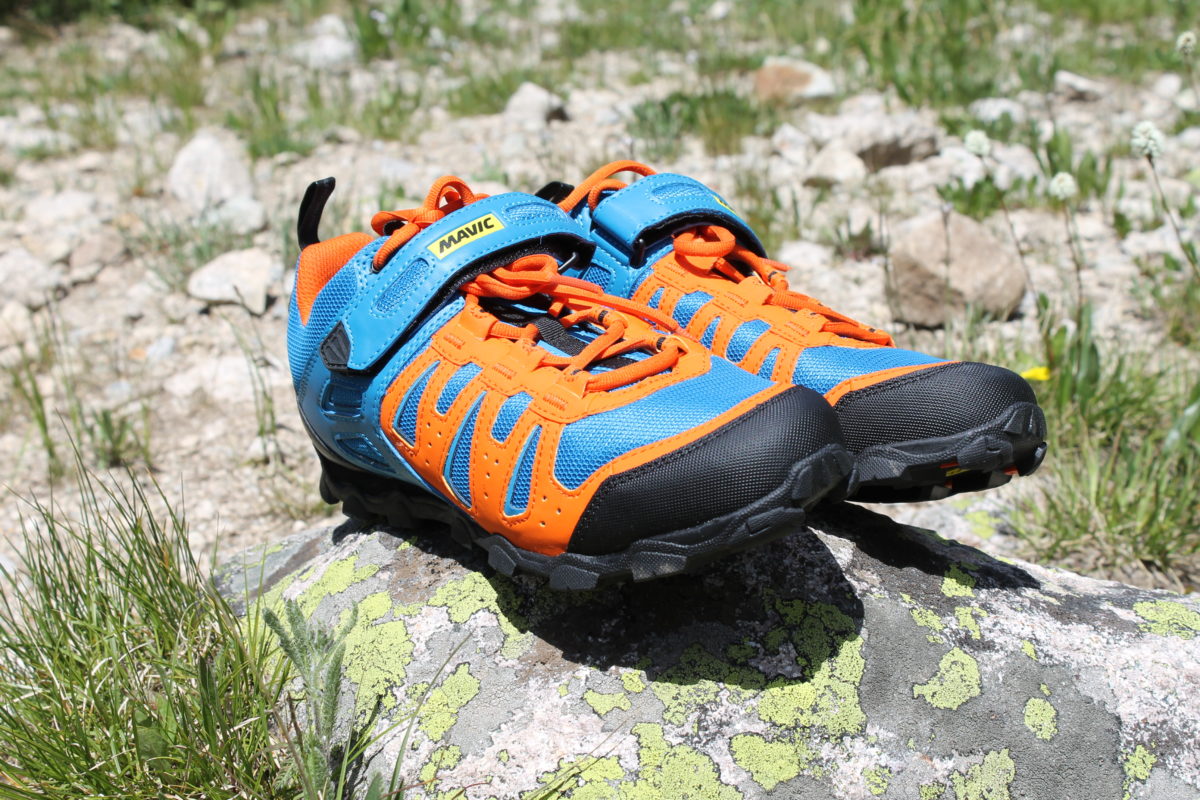 Out of the box, the Crossride Elite looks like a quality enduro shoe on a budget. The closure is a combination of standard laces and an upper velcro strap, forgoing the more expensive buckles and pull laces of higher-end enduro shoes. The uppers appear well-ventilated with plenty of mesh, and the sole consists of heavily-lugged rubber, which promised plenty of grip in hike-a-bike situations. The midsole is EVA, and the design is dubbed “Energy Grip Trail” by Mavic.

The Crossride Elites weigh in at roughly 820 grams for the pair, according to my scale, with a little dirt caked on and no cleats installed. 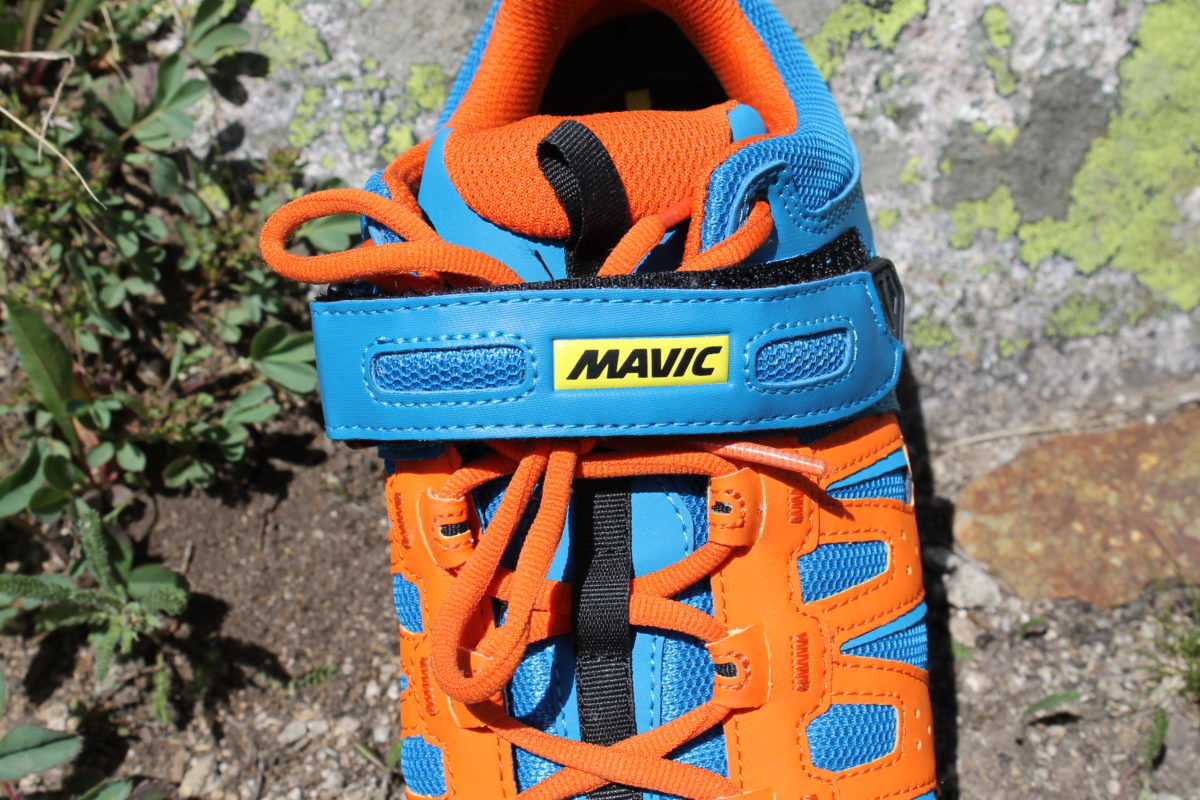 Right out of the gate, I was quite pleased with the Crossrides. While they aren’t the lightest shoe on the market, a stiff sole made for respectable pedaling efficiency, and the grippy outsole initially proved confident in steep, loose, off-camber terrain.

During the summer I spend much of my time hike-a-biking high above treeline to access remote alpine trails, occasionally bagging a thirteen- or fourteen-thousand foot mountain peak along the way. The Crossrides looked to be the perfect shoes for this application! 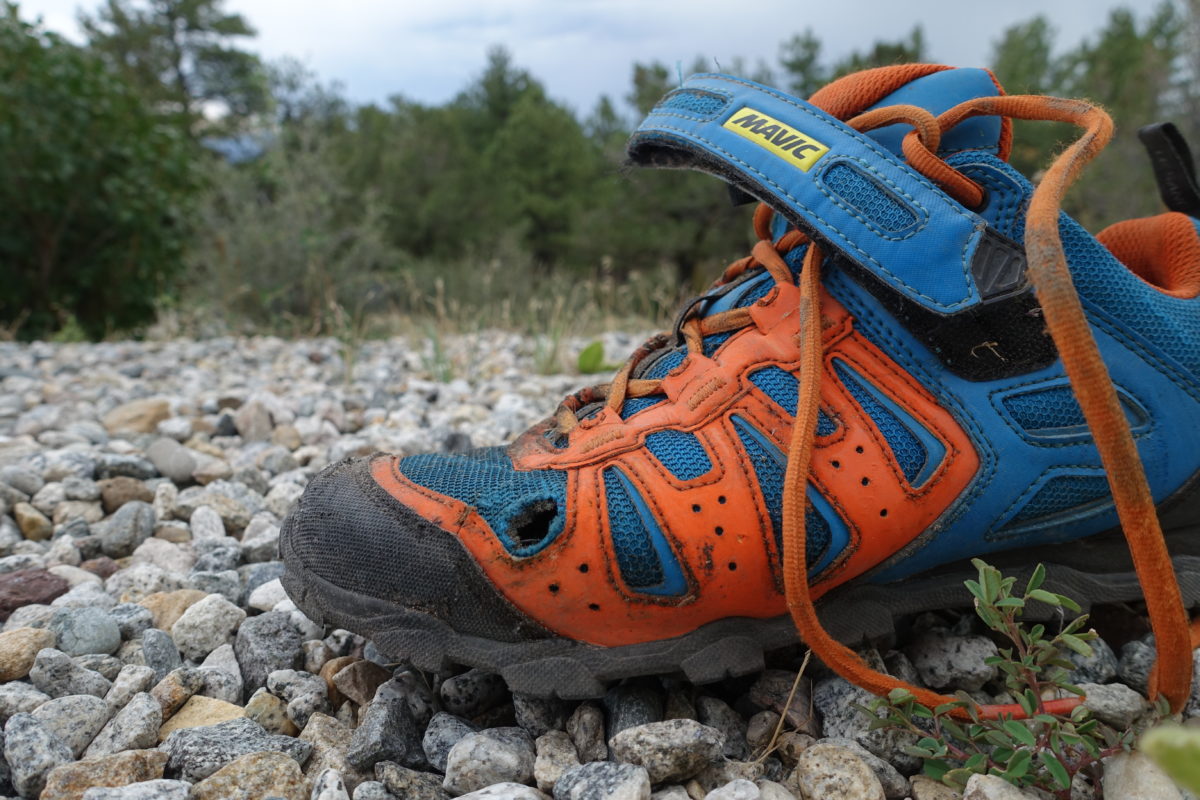 However, my durability woes began on ride #2, when I smacked a rock–hard!–with the side of my foot, and tore a hole in the upper. It’s quite possible that many shoes would have torn from a rock strike that harsh, so during the remainder of the test, I kept an eye on the hole to see if it would grow larger. Over the course of the next four weeks, it remained the same size instead of continuing to tear open, so kudos to Mavic for what proved to be a relatively durable upper, all things considered.

But my luck wouldn’t be so great with the soles of the shoes. In short, these soles only lasted me four weeks of riding before they completely fell apart.

Granted, at the end of four weeks I had logged almost 300 miles of challenging singletrack riding, which is no small feat. But whether or not that’s a lot of miles or very few miles for one month of riding depends entirely on the rider. 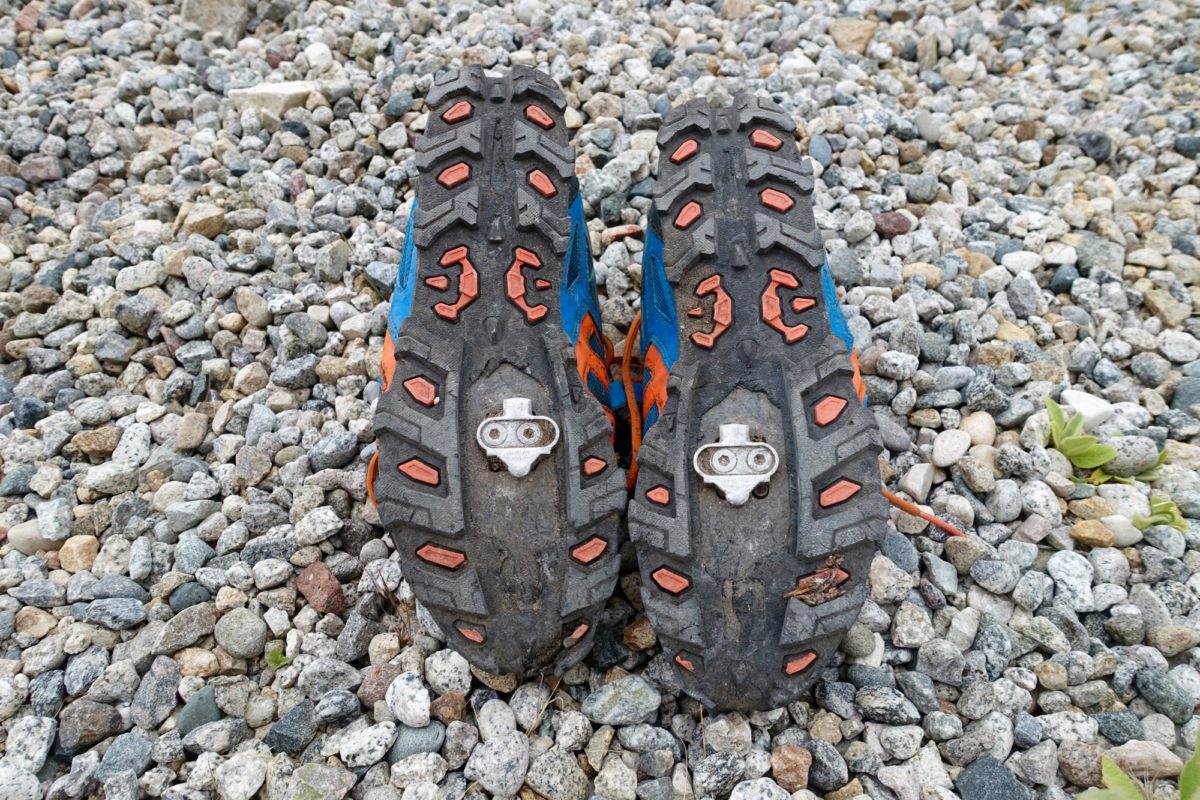 At the end of my test period, I had succeeded in tearing lugs off the front of the shoes, punishing the rubber connection to the hard plastic sole so that it was disintegrating and peeling away, with the other lugs that were still attached showing significant wear. Just check out the photos for yourself. 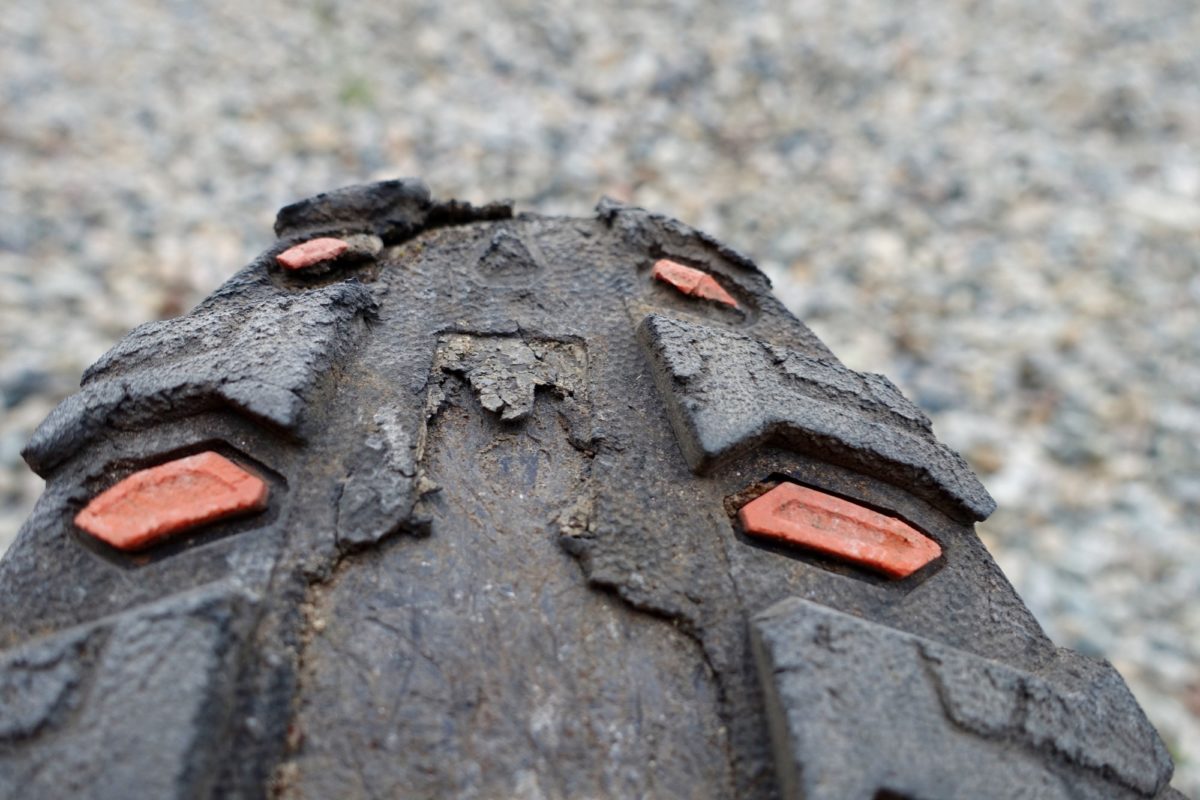 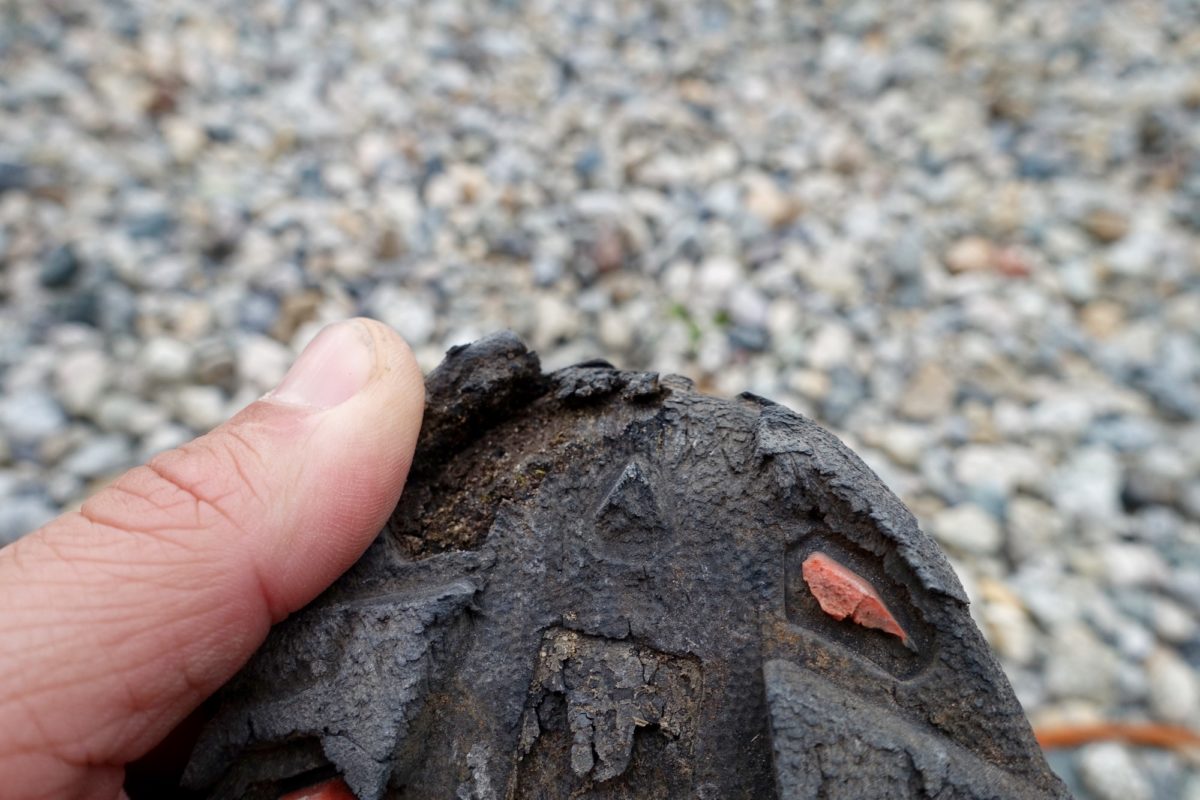 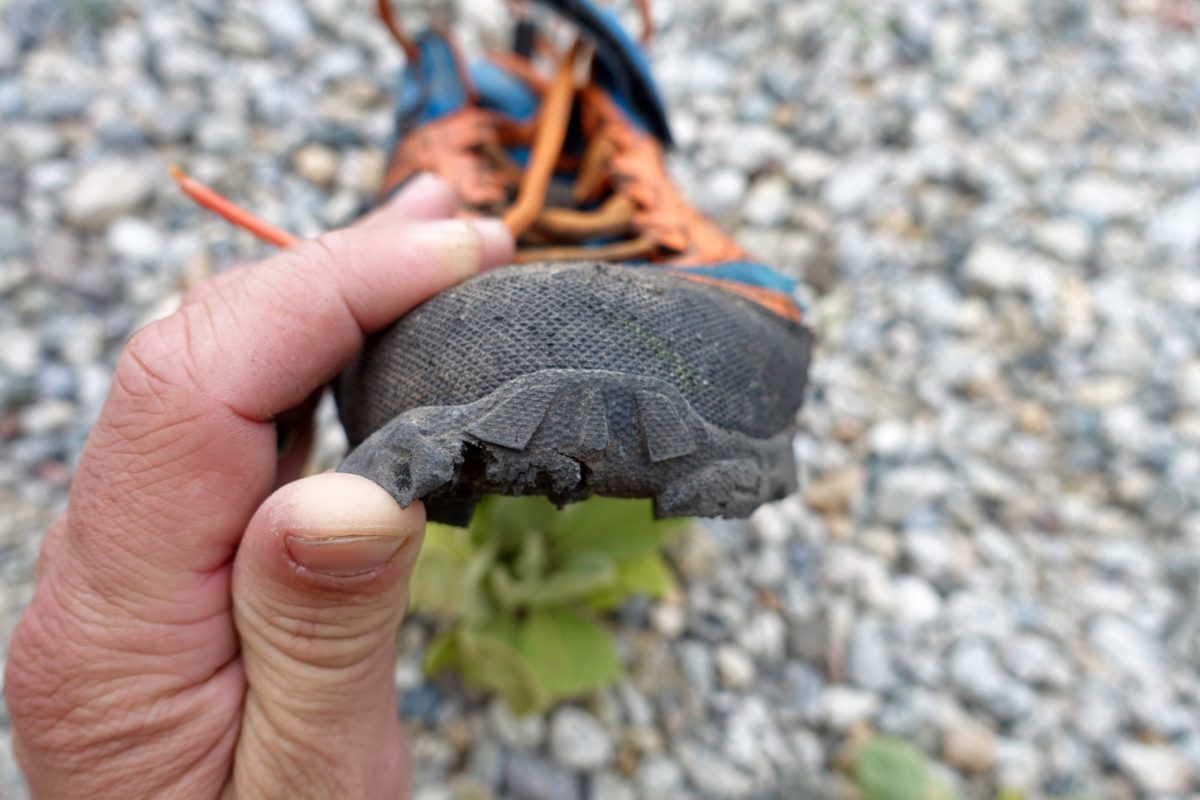 While I completely understand that shoes are a wear item and that they don’t last forever, I expect them to last at least one solid season–or at least, the better part of a season, if you’re logging a ton of miles. And indeed, I’ve had plenty of shoes last me a full season or more in these same conditions and on these same trails, most of which were standard XC shoes. But one month and 300 miles is nowhere close to a full season of riding.

If a standard XC shoe can handle endless hike-a-bikes in scree fields, it seems obvious that a shoe designed for hike-a-biking should be able to do the same, but I didn’t find that to be the case with the Crossrides.

I reached out to Mavic about this issue, and I learned that this model of shoe, the Crossride Elite, has already been discontinued, and won’t carry on into 2017. Also, according to Mavic, at $120 MSRP, the Crossrides are intended for a more casual rider, and I’m not the intended user. At the time of this writing, there is no official statement from Mavic about whether or not there was a structural or material issue with the shoes. 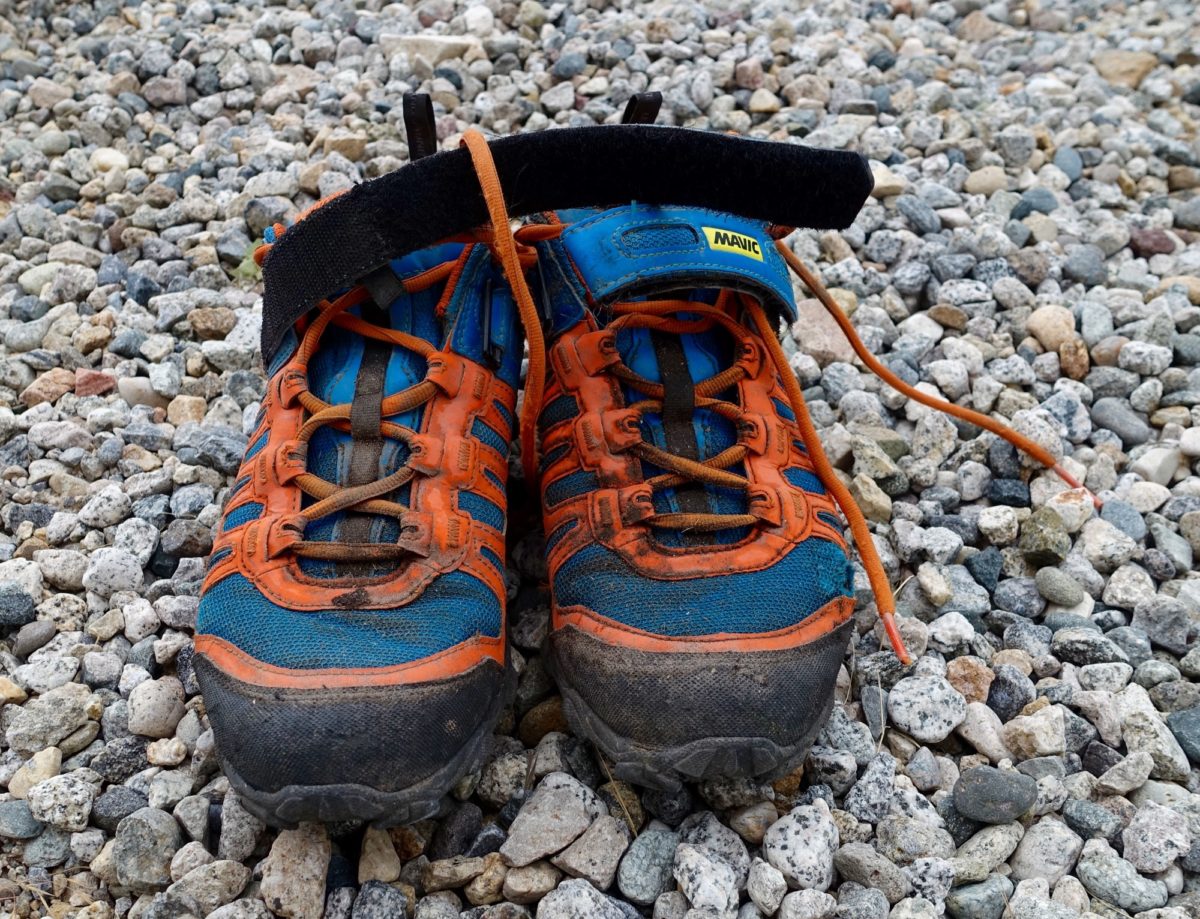 If you are indeed a casual rider and you don’t anticipate doing much hike-a-biking in technical terrain, then perhaps you could get away with using the Crossride Elites. I personally could not. However, if you’re looking for an affordable shoe and you don’t intend to be doing much walking or hiking, the Crossride isn’t the best shoe for that application–a standard cross country shoe is.

While the $120 MSRP price tag is pretty low, and the close-out $64.97 pricing on Backcountry.com is a screaming deal in comparison, since these shoes don’t fulfill their intended purpose, I can’t recommend them.

Stay tuned for another shoe review from Mavic. Following my issues with the Crossride Elites, they sent over their Crossmax XL Pro shoes, their top-of-the-line enduro shoe. Hopefully these shoes fare better!

Thanks to Mavic for providing the Crossride Elite Shoes for testing.

Trails
Our Most Memorable Mountain Bike Trails of 2021
Trails
8 Months after Being Shut Down, San Lee Gravity Bike...
Community
We Road Tripped to Sedona in this Rig to See...
Gear
These Are the MTB Products You Didn't Know You Needed
Subscribe
Login
Please login to comment
10 Comments
Most Voted
Newest Oldest
Inline Feedbacks
View all comments

Sounds like you (and perhaps Dan) might be better candidates for flat pedals and some Five Tens since you spend a lot of time hike-a-biking.

That said, for a pair of shoes to give up the ghost after 300 miles is pretty bad.

They do. But I was suggesting some flat pedals and corresponding flat pedal shoes for hike-a-bikes in rocky terrain.

Well here’s the thing:
1. I like riding clipless pedals.
2. XC shoes don’t fall apart in these rocky hike-a-bike conditions.
3. Many enduro shoes, like these Mavics, DO fall apart, despite being advertised as suited for the purpose.

As such, I personally think there’s a serious disconnect here.

I’m currently on the lookout for a quality pair of clipless enduro shoes that can stand one full season of riding in the Rockies. If any brand out there can take the challenge, let me know!

PS one of the pairs that I’ve had fall apart were a pair of Five Tens that were both flat shoes and clipless compatible if so desired. So not stoked on going that route either.

I have experienced the same thing with my XC shoes as stated in #2 of your post. Why on Earth do you think XC shoes survive when the enduro shoes fall apart?
response to PS: I am pretty surprised about Five Tens falling apart. Thats a pretty reputable brand!

Try the Shimano SH-M200 shoes. Best of both worlds – a nearly XC-stiff sole but soft rubber lugs so walking isn’t sketchy. I’ve had really good luck with them, but I also don’t do nearly as much hike-a-biking.

I have a pair of 5.10 Spitfires that I got for around $40. Super comfy and great for hiking. That said, I was coveting these crossrides (sadly because of the color scheme) – glad I never pulled the trigger!

Only 300 mil for an advertised Enduro shoe? Dang, that is pathetic. I have a pair of XC Bontrager Incom shoes that cost about 80-100 dollars and I have ridden them for about 2.5 years. They still are in good shape. I have crashed’em, hiked’em, smashed’em into stuff, and just generally rode like an aggressive trail rider on’em. They have never failed me yet. They are efficient, light and seemingly indestructible. I thought all shoes were like this. i had no idea most shoes only last a season! Gosh.
By the way, these are my first and only pair of bike shoes. I am looking to get a specialized 2Fo clip shoe very soon. If anybody has anything to say about these shoes please let me know. I am opening a forum topic on this now.

I went with the Pearl Izumi X Alp Enduro shoe for this season. Comfortable, durable and inexpensive. We don’t have nearly the quantity and quality of rocks here in Wisconsin but I’ve put 700+ miles on them, walked and drove in them plenty, done some trailwork and geocaching in them and have hit a few rocks with them. They’re still mint. Probably not as ventilated as the Mavic’s. The lugs are spaced super close together so I think they’d be tough to sheer and I get decent traction.