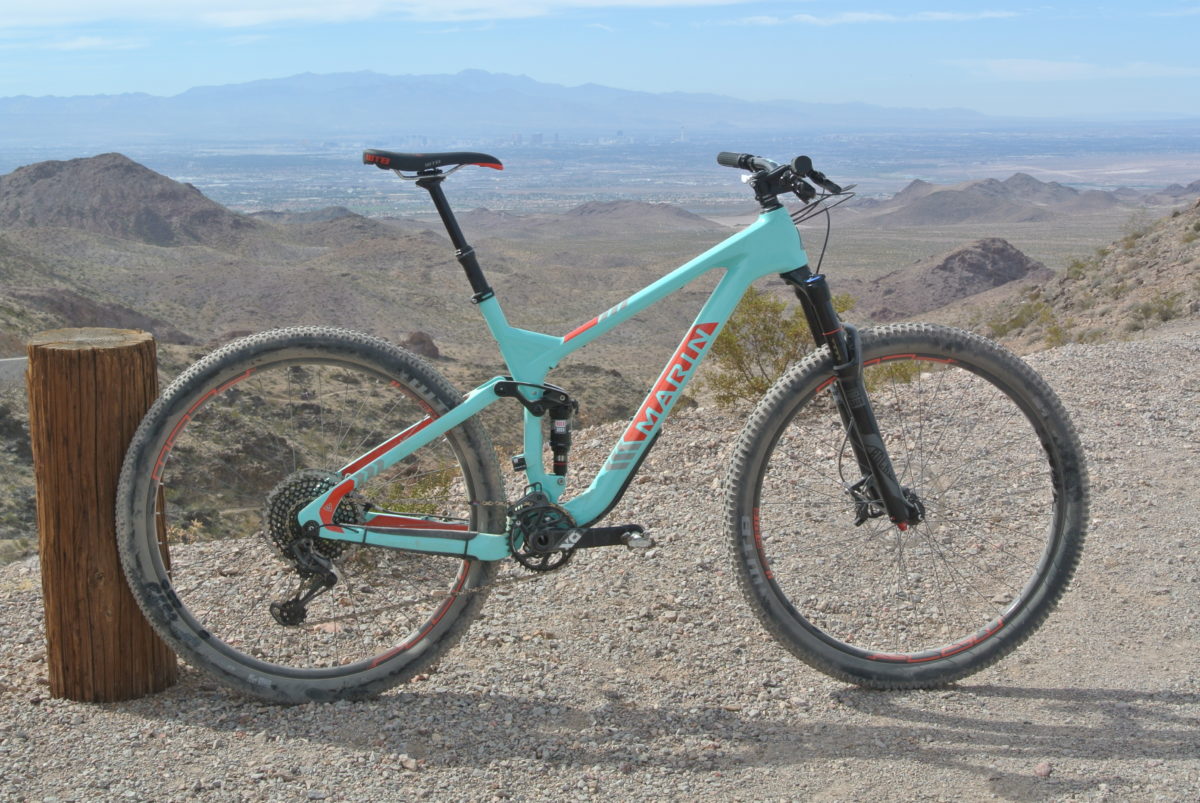 Based solely on looks, the Marin Rift Zone Pro was the prettiest bike I saw at Outdoor Demo. Marin calls the paint job “teal with red,” but in person, it looks pretty damn close to the classic Gulf Racing blue and orange. Add in the top-tier parts spec, and the Rift Zone is certainly a lust-worthy bike. So it has the looks and it has the parts, but what is this bike all about? 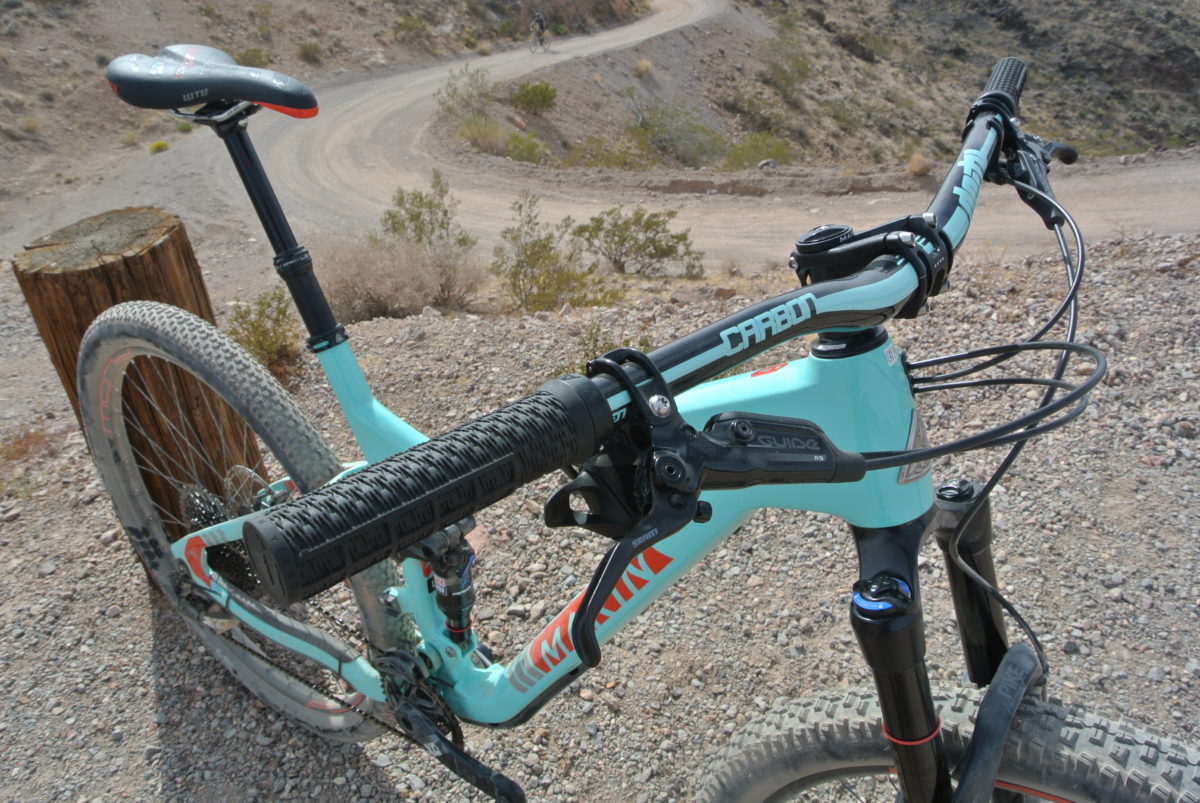 Well, for starters, it is a short travel 29er trail bike. I actually got to ride this bike back-to-back with the Transition Smuggler, which is in the same class. The two bikes have similar amounts of travel, but the geometry is quite different, with the Smuggler trending slacker and lower. Travel on the Rift Zone is 110mm rear and 120mm front. The head tube angle is 69.7 degrees–steep by today’s standards–and the chainstays are 440mm, which is middle of the road. Not too short, but not too long. For the size large bike that I rode, the reach was just a millimeter shy of the Smuggler at 456mm. 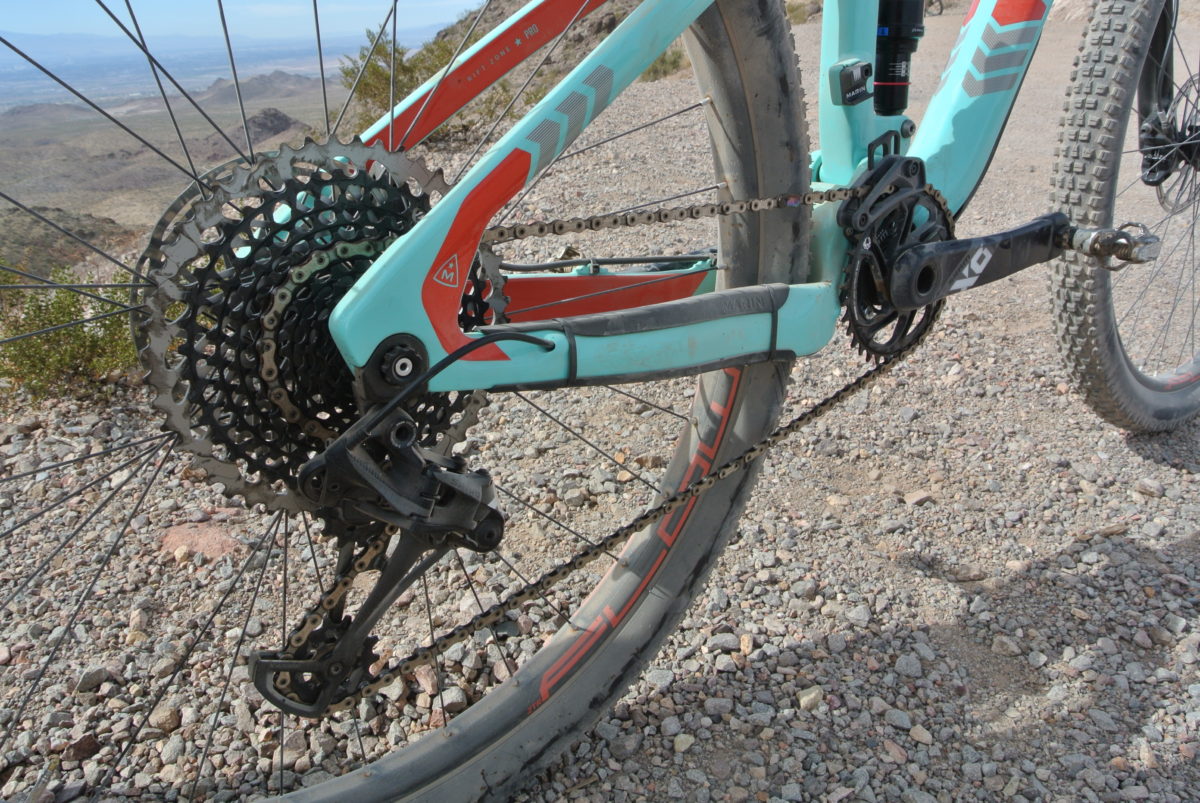 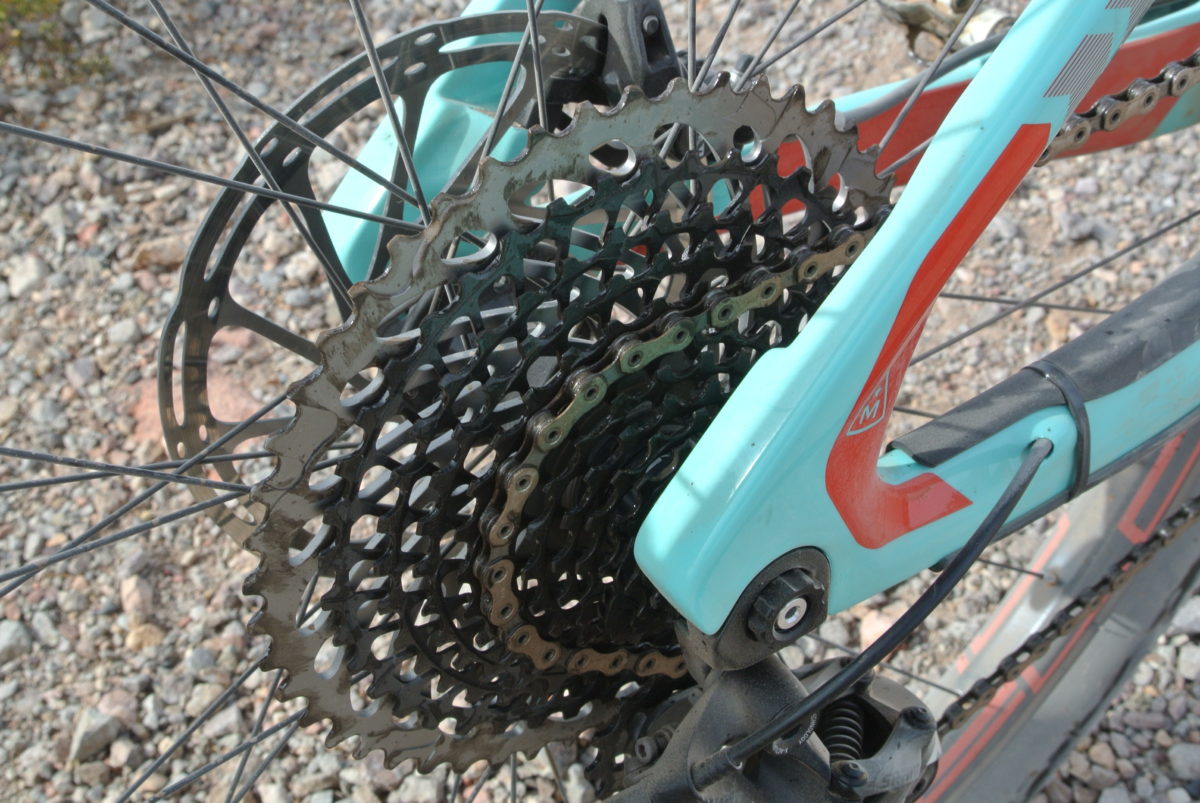 At $6,200, the Rift Zone Pro is an expensive bike. For that kind of scratch you would expect an impeccable spec, and Marin delivered. The entire frame, including the rear triangle, is carbon fiber. Mounted to that frame are RockShox’s Monarch RT3 shock and Pike RCT3 fork. For 2017, Marin is using SRAM’s X01 Eagle 12-speed drivetrain. SRAM also handles the brakes with their Guide RS. The dropper post is the KS LEV, which is now nearly as common a sight as the Reverb. Other nice touches on the frame are the color-matched WTB saddle, as well as the color matched decals on the Stan’s Flow Mk3 wheels. Marin gives some love to smaller component companies too, speccing a Gamut stem and Deity bars. 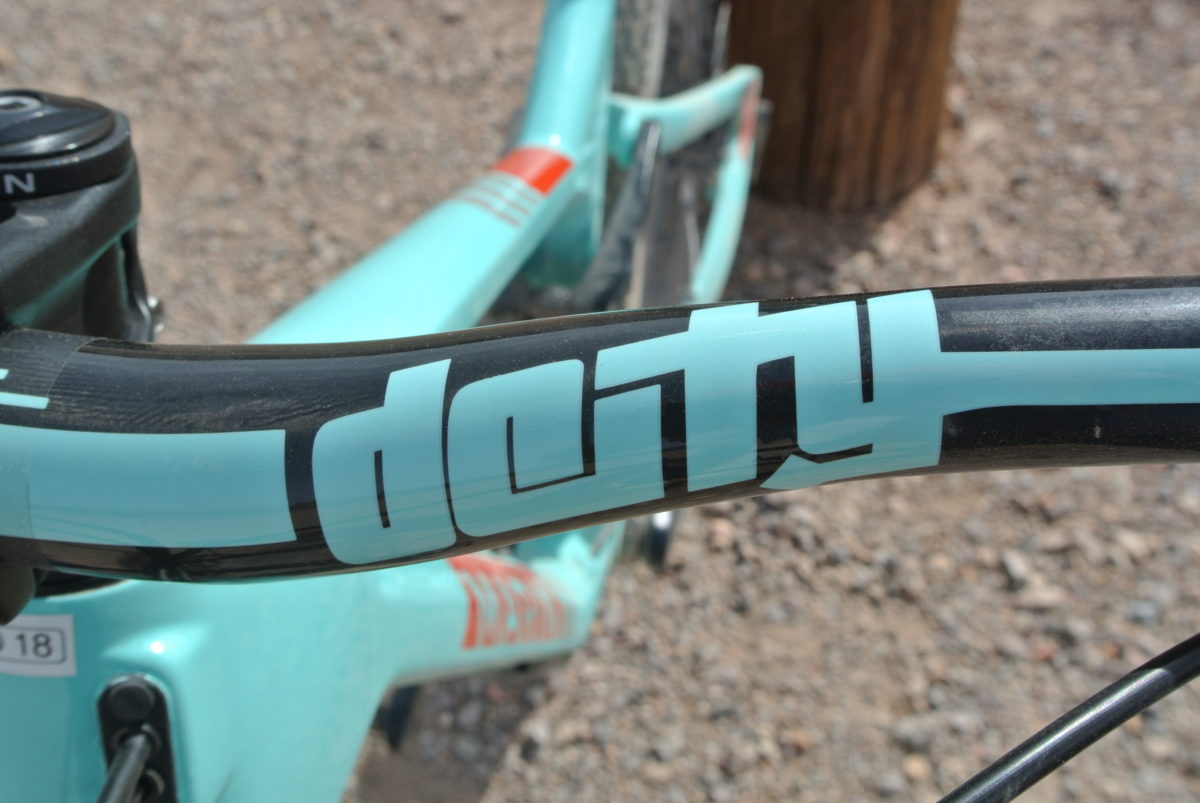 From the first few pedal strokes, the differences between the Rift Zone and Smuggler were obvious. The Rift Zone craves speed going up and down. It begs you to drop the hammer. The Smuggler was no slouch on the climbs, but it had nowhere near the urgency of the Rift Zone. Basically, the Smuggler says, “Chill bro, we’ll get there,” while the Rift Zone asks, “Why aren’t we there yet?”

Once you have crested the climb and the real fun begins, the Rift Zone continues to urge you on. Marin specced a narrow WTB Nine Line on the rear, which is most certainly an XC tire. It rolled great, but as you might imagine, it was not the best for the loose over hard conditions at Bootleg Canyon. Luckily, there was a knobbier WTB Trail Boss up front to keep the bike heading in the right direction. Because you have limited travel to work with, the Rift Zone requires a more attentive pilot than the Smuggler–the geometry on the Marin is not as forgiving. 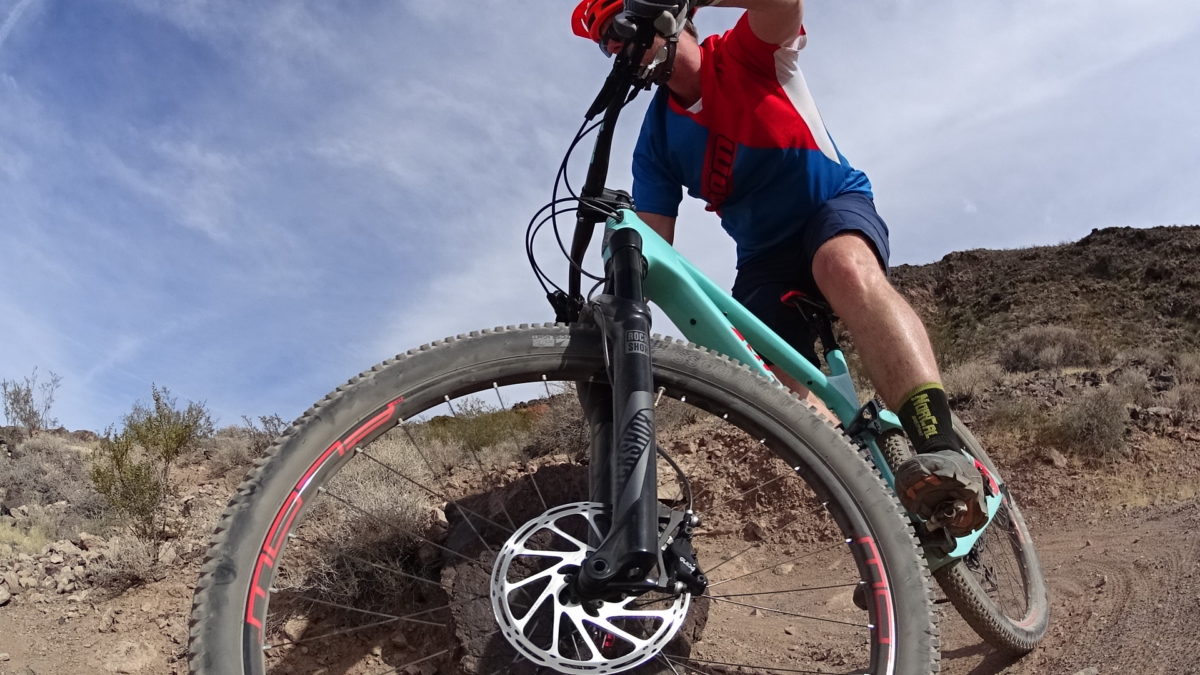 Combined, all these traits make the Marin a sharp-looking and sharp-handling bike. Even though my lap times on the two bikes were similar, the Marin felt faster. I would compare it to driving a go-kart where the sensation of speed is greater than the speed itself. The Rift Zone is for a rider that has stopped pinning on numbers, but is not done racing.