After a less than spectacular experience with the Magellan eXplorist 200 I decided to upgrade and give the eXplorist 400 a try. I purchased the GPS unit as part of the “Wilderness Bundle” which included the Magellan MapSend Topo USA software, an extra memory card, and a carrying case for a little under $250. When the bundle arrived I was pleasantly surprised to find a larger SD memory card than advertised (128MB instead of 16MB) and an AC adapter instead of a cigarette lighter power supply. Sweet!

The eXplorist 400 comes with a rechargeable battery good for up to 14 hours of power and includes an adapter that allows you to use standard AAA batteries in a pinch. This is a great addition for anyone who plans to spend an extended amount of time on the trail where power supplies aren’t readily available. The expandable media is another big plus since there’s virtually no limit to the number of tracks or waypoints you can save (depending on your SD card size). The expandable memory really shines when paired with topographic data downloaded from Magellan MapSend software but that’ll have to wait for another review.

Marking waypoints is a cinch with the eXplorist 400 – just press the “Mark” button to save your spot. The controls are identical to those on the eXplorist 200 and they’re pretty easy to use (though it may be difficult for those with large fingers). Fortunately the eXplorist 400 doesn’t come with any flimsy software for transferring GPS data to your computer – just plug it into your USB port and the GPS memory shows up as a removable drive. Dragging and dropping waypoint and trackpoint files is a snap. As a bonus I was even able to access the unit’s internal and SD memory using my Mac (though not officially supported).

No GPS unit is perfect and the eXplorist 400 falls short in a few areas. First, the computer cable connection on the back of the eXplorist is pretty wonky and involves lining up contact points and using your fingers to screw the connection in place. The battery compartment is secured in the same way and I had a tough time removing the tight-fitting rechargeable battery to access the SD memory card. The eXplorist 400 is certainly not dainty and when coupled with the bulky Magellan bike mount it looks like you’re carrying an ostrich egg on your handlebars. 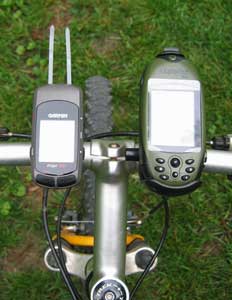 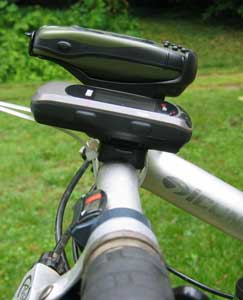 On the trail the satellite signal reception left a bit to be desired, though it was certainly no worse than my experience with the Garmin eTrex Vista. The eXplorist 400 user manual says “Do: Point the antenna up toward the sky. Don’t: Stand under trees or heavy foliage.” Avoiding tree cover is kinda tough on most mountain bike trails so this could be a significant limitation. To be fair though, I had no problems using it in thick, full foliage tree cover – but it’s certainly something to consider.

The eXplorist 400 is truly a great value when purchased as part of the “Wilderness Bundle” and it’s a decent choice for mountain bikers looking for a solid and expandable GPS unit. Stay tuned because next I’ll review the MapSend Topo USA software (included in the Wilderness Bundle) and explain how you can use the software to build ultra-detailed topographic maps for your next ride.

You can purchase the eXplorist 400 Wilderness Bundle from Amazon.com.

[…] I purchased the Magellan eXplorist 400 “Wilderness bundle” a couple weeks back and I’ve been using the included MapSend Topo 3D USA software for sending detailed maps to my GPS receiver. I was quickly amazed at the improved utility of my eXplorist 400 yet somewhat frustrated with the whole process. […]