The phrase “they just don’t make them like they used to” definitely applies to mountain bikes, though not in the same way it does to say, old houses. Almost everything about how mountain bikes are built and specced, from design to materials to construction, has been rethought, refined, and revised from one race season to the next. Progress hasn’t always been orderly and neat, and many gains seen along the way are incremental at best. So where are we now, and was it all worthwhile? Nic Sims of SIMBOL Communications decided to find out by racing his 1990s mountain bike in Park City this summer.

Formerly a Specialized employee for 22 years, Sims picked up this carbon-tubed, titanium-lugged Epic Ultimate mountain bike in 1994. At the time, the rigid bike was the top of the line. He says, “back then, it was easily a $7-8,000 bike.” In today’s dollars, that’s well over $10,000 for a bike with zero suspension.

After rebuilding the bike a few years ago, Sims brought it out to a practice or two with the Park City High School NICA team, where he’s a coach. It turned out to be a great teaching aid, despite the young riders’ initially skeptical reaction. Naturally there were questions, like “how did you not crash” and “didn’t you get flat tires?”

“I’m like, you’ve gotta be light on your pedals. You just have to let the bike move around underneath you.”

Sims says one of the high schoolers pedaled the bike for a bit and remarked, “this thing is crazy twitchy.” Of course ‘twitchy’ is often a dysphemism for ‘responsive,’ a characteristic many XC racers prize just as much today as they did in the 1990s.

In its race-ready state, this Specialized Epic Ultimate sees a few updates over its stock build and configuration. Sims modified the triple-ring drivetrain, ditching the granny ring to run two-by and found a long, titanium Moots seat post to get a decent fit on the bike. He also swapped in a set of Syncros low rise carbon bars, and found a good deal on a used set of 26″ Reynolds carbon wheels. The only hitch: the frame doesn’t have disc brake mounts, and most carbon rims aren’t designed to be used as a braking surface.

“[When I got them home,] I see them and I thought, ‘Oh crap, they’re disc.’ But I remembered at that point, that was when disc [brakes] were starting and so a lot of companies were making wheel sets that could do both.” Sims checked with a friend at Reynolds who said it was technically possible to use the wheels with rim brakes, with the caveat that Sims would need to ride carefully and brake properly to avoid catastrophic failure.

Then there was the fact that the rims are tubular, as opposed to today’s tubeless rim standard. There aren’t a lot of choices when it comes to tubular mountain bike tires, so Sims found a pair of Geax handmade race tubulars and glued them well enough to hold air for the race.

All told, Sims estimates the build weighed just 18-20 pounds at the start line, likely a few pounds lighter than most of the modern machines he would be racing against.

Sims ended up doing pretty well in the race, placing fourth in his age group out of a field of 15 riders, an impressive feat, particularly among fit, Park City riders. “It was just fun, [though] then at the end I had a bit of a stiff neck.”

With such a unique bike in the race, he attracted attention from riders and spectators alike, including a collector named Charles who approached him in the parking lot afterward. “He said, ‘Is that an Epic Ultimate? I’ve only ever read about it.'” The man was very interested in buying the bike, but Nic was reluctant at first. In the end, he decided the bike would be going to a good home and besides, it was unlikely he would be racing it again.

Charles has already gone to work on the bike, swapping components, and like a proud new parent, he’s shared photo updates with Sims. The photos above show the new additions, including the Specialized titanium stem and AMP Research fork Charles added since getting the bike.

After selling his Specialized Epic Ultimate, Sims isn’t in a hurry to replace it with a modern XC race whip. “I did the Mid Week local race as a fun thing to do with my kids. The high school kids and my wife secretly signed me up for it. I’ve done the race thing and now I just like riding my bike and passing along the excitement I get from riding.”

Still, he isn’t closing the door on a new race bike entirely. “I haven’t raced in a while so I haven’t needed a nice XC ride, although coaching the fast kids from the high school I am now thinking about it. I am getting older and slower and they get older and faster. ”

I asked Sims what he learned from the experience of racing a vintage mountain bike, and he mentioned a number of positive takeaways including gaining an appreciation for how great current bikes are, and how a unique bike can be an excellent conversation starter. Also, “it’s great to show people how to ride and understand about being light on your pedals.”

The flip side, he tells me, is the handling is indeed “super twitchy” and the narrow, high pressure tires aren’t very forgiving. Even if more modern components were an option, the geometry is what it is. There’s just “too much seat-to-bar drop.” Ultimately, Nic says “Everything hurts.”

I remember questioning the purity of suspension forks in the early 90’s when they were not widespread, and out of reach for me financially. But I would never ride rocky terrain without them again. On fast rocky terrain, with some 1.95″ tires, the level of comfort and control was objectively terrible.

Fun article. I still ride my ‘94 slingshot all the time! 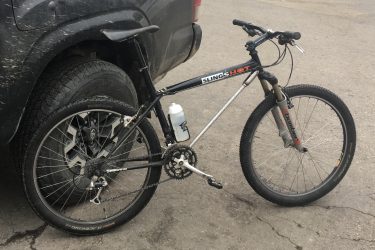 I remember those discussions well. I was anti suspension until I started losing races because I couldn’t keep up on the in ‘95. My bike had a ‘96 Judy soon thereafter…

A lot of modern mountain bikers would be well served to spend some time on old school equipment, the biggest reason being how to ride light on the bike. Modern riders with the emphasis on “heavy feet, light hands” don’t get that it doesn’t apply 100% of the time and knowing how to unweight the bike over certain trail features (typically rocks, or rooty sections) can make you faster with less chance of bike damage. Line selection is another skill that is absolutely demanded by older bikes where it is a “nice to have” skill on newer bikes since they’re so forgiving.
And no, I’m not an old-school curmudgeon who thinks bikes from this century are crap. I do think they modern bikes are so good, modern riders don’t get to develop some of the skills a lot of us take for granted.

Last edited 5 months ago by Phonebem
1

Still have a few early bikes in my collection including a Cook Brothers and a Descender.

Cool to see that bike, but hard pass on riding the retro bikes anymore. I remember all too well how twitchy, harsh, awkward (no dropper), and inferior they are to today’s bikes. Back in the day, that is all we had, adapted to them, and of course had fun with them. Probably made me a better rider, however, everything about new bikes today is light years ahead; tires, droppers, thru-axles, suspension, drivetrains, wheels, everything is just way, way better now.