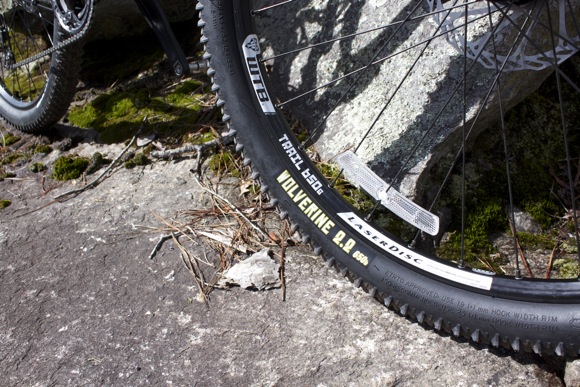 There’s been a lot of hubub around the interwebs of late about the potential explosion of the 650b wheel size. Much of the commotion is around the very substantial rumor that Fox and Rock Shox are both developing 650b forks, leading many to believe that several major bike brands will be rolling out 650b-specific rigs.

I’m not much into hype, but if something new is going to work, then it’s going to work. If it’s not… well, then it isn’t. Regardless, I want to make my own decision. The recent Southeast Bike Expo provided the perfect opportunity to get some hands-on experience with the 27.5″ wheel size. 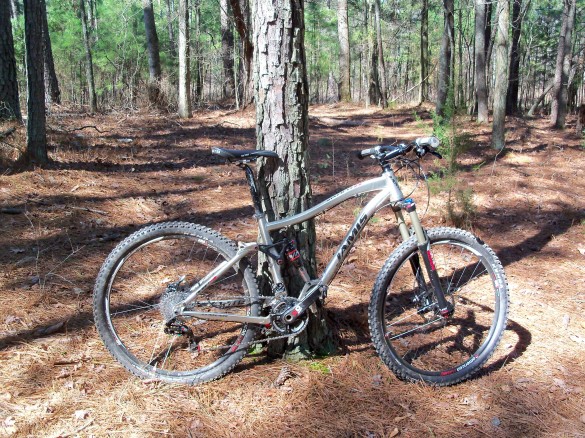 In order to get a feel for what 650b wheels can do, I headed straight for the Jamis tent. All the talk about big-name brands going 650b is still officially just rumor, but Jamis has been a supporter of the wheel size since at least 2010. When asked about the potential increase in 650b bikes, one of the reps I spoke with commented that they wanted to remain on the cutting edge of 650b technology, and plans are in place to roll out many more 27.5″ wheeled models next year. 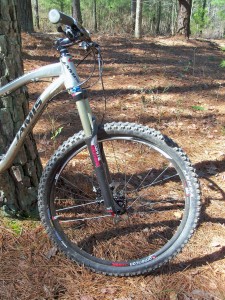 Out on the trail, I had a ripping good time on the Dakar! With 5+” of travel, this ride was super plush and absorbed everything in its path. It was fairly nimble too, taking to the air with grace and returning to the earth with ease.

This Pro model was smartly kitted out with a full SRAM X0 2×10 group and a White Industries fork.

I wasn’t all that happy with the performance on the climbs, though. I’m not sure if I just needed more calories in my system or if the rear shock needed to be tuned better, but the Sixfifty B Pro felt rather sluggish going uphill, even compared to other 5″ travel bikes I tested that day.

I thought perhaps the build was just rather hefty, and off the top of my head I guessed the complete weight to be about 32 pounds. When I got home and checked the website, I saw that it actually tips the scales at a claimed 27.75 pounds.

Also, I found that I really had to focus to keep the front end from wandering on the climbs. It could have been a result of the cockpit not being set up properly for my body, since this was just a quick demo ride. 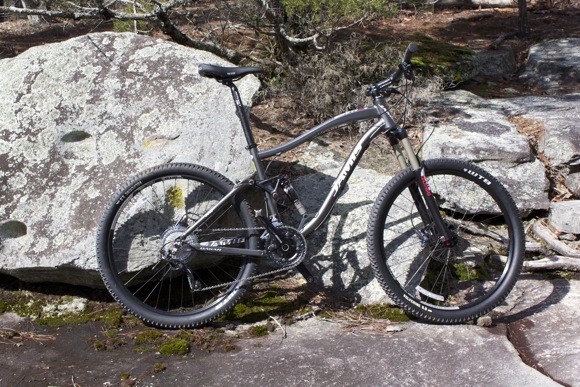 But how did the wheels perform?Well, you’re going to hate my response, but they performed exactly like you’d expect them to.No, seriously: they’re a perfect blend of 26″ wheels and 29″ wheels.

They roll over roots and smaller obstacles better than 26″ wheels but not as good as 29″ wheels.

According to one of the Jamis reps I spoke with, they think that 650b is the perfect wheel size for 5″ travel bikes (and up). There are obvious geometry issues with trying to squeeze 29″ wheels into a long-travel frame–650b may be the perfect compromise for the long-travel market.

Of course, with bikes like the Niner W.F.O. getting such rave reviews, their argument might not be quite as strong as they think it is. 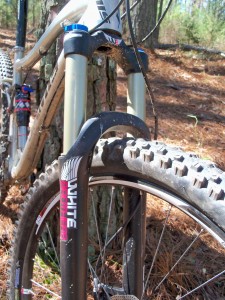 I’m really not sure why there’s been all this buzz surrounding the potential increase in the production of 650b bikes. The fact of the matter is, if you want to ride a 650b, there are already great 650b bikes on the market! Jamis produces several great bikes, and Haro and KHS also produce 650b’s.

Then there’s the issue of the fork. Honestly, who cares what Fox and Rock Shox are doing? Sure, they make great products, but White Brothers is already producing fantastic forks in the 650b size.

I’ve read negative reviews and I’ve read positive reviews of White Brothers, but I have to say, my experience on their fork this weekend was excellent. It provided smooth, predictable action with more plushness than you can shake a pogo stick at.

Is another wheel size necessary? No.But does 650b offer a real difference in performance compared to both 26″ wheels and 29″ wheels? Yes.

In the end, as with most things, it’s all about personal preference. I would personally love to spend more time reviewing a 27.5″ wheeled bike, but I don’t know if I’d buy one at this point or not.

650b is not going to be for everyone, but if you think it’s for you, what are you waiting for? Try one out now!

Your Turn: What are your thoughts on the 650b wheel size?

Great review and breakdown of the 650b situation. Part of the reason we’re seeing all this hype is many manufacturers were caught off guard by the whole 29er thing so in some cases they’re over-reacting to the possibility of a new wheel standard. My take: for long travel and women’s bikes, 650b should find a market.

I agree with your review of the Jamis Sixfifty B1 – it didn’t seem to climb any better than a 29er but it was definitely more maneuverable. But here’s the thing about improved maneuverability: DH and FR guys are gonna say they need 26″ wheels for this reason (or because they’re “stronger”) but if those were the most important things, they’d be riding 24″ wheels or smaller. No, larger wheels have both advantages and disadvantages over smaller ones so it’s all about finding the sweet spot where the tradeoffs are minimized.

I also thought the White Industries fork performed well. It’ll be interesting to see what types of 650b products come out this year. I assume it’ll be long travel forks, burly wheels, and beefy tires but you never know… Maxxis’s first 650b tire will be the CrossMark which is a fast rolling XC tire.

I imagine the poor climbing has more to do with the suspension design than the wheel size.

One of the guys I talked to at one of the tire manufacturers booths said 650B is indeed coming, and coming big. Giant and “the company with a big red ‘S’ in their name” were both mentioned.

@trek7k, I agree with you: there’ll be a market, it’s just probably going to be a very specific one.

@Dustin Gaddis, The suspension might not have been tuned properly, but poor climbing isn’t a result of just the sheer amount of travel. I hopped on a 26er with just as much, if not more, travel than this and it just scampered up the climbs. I don’t think the wheelsize was the factor, either.

The wandering front end I’m chalking up to either geometry or cockpit setup. Like I said, I’d like to get to spend some time with one of these so I could setup the cockpit to fit my body, and THEN see what it’s made of.

I humbly submit myself as the long term test monkey for either a Jamis Dragon 650 or a KHS sixfifty606. 😀

I really really like pretty much everything about my 29er, but it is weird having a wheel diameter that matches my inseam…

I think I definitely fall into the intended market for a 650b XC setup.

Having test-ridden 650b setups and 29ers in search of a replacement for my current 26″, I have to agree completely that it’s the perfect middle ground.

My problem with it, though, is understanding the market for it. I can’t see long travel 650b’s overtaking 26ers for DH, and 29er trail bikes and hardtails are approaching 26er levels of agility with every geometry iteration.

I can see it being a good solution for smaller riders, but many 29er manufacturers are making S and XS geometry now.

I recently purchased a Jamis Nemesis 650 hardtail bike. I’ve ridden a few 29ers on trails, and really didn’t like the feel of them. I’m coming off a 26 Zaskar, which I loved. I would agree with the post: it feels like exactly what it is – more maneuverability than a 29, but more rollover-ability than a 26. Really like it so far, and feel like it’s the sweet spot for me.

I was looking to make a B-6er custom softail frankenbike with a 120 mm velvet and 1.5 inches of travel in the back. Sadly, I can’t afford the scratch to build my dreambike in this economy. If I could, a modified Song Siren would be the perfect ride to accomplish this. I think that setup could give similar acceleration, climbing, and carveabilty to my 2001 Gt zaskar LE XC rocket compared to a full susser or full 29er, but with a little more rollover, downhill stability, and comfort from the larger front wheel, extra travel, and frame compliance/Geometry. Keeping the zaskar though, that sub 20lb rocket ride is just too sweet on some stuff! Alas, I haven’t won the lottery yet, so by the time I save the 6 grand or so I will need for a proper build, there will probably be all new technology to lust over!

I am riding faster and over more obstacles than I ever did with the 26″ wheels.

The company that makes that fork is White Brothers, not White Industries.

Thanks for the correction stevethousand.

Interesting that you were dissatisfied with the rear shock. I was at first too. However, I have put 155 lbs. pressure in it (even though I only weigh 120 lbs.) and it seems much better for climbing, with no adverse affects on the DH drops, etc. I have the 2011 15″ Jamis 650b Pro and I just love it! Have to cut the handlebars down though. Maybe that was what caused your uphill meandering? I’m thinking that’s the cause of mine. They’re 3.5″ longer than the old bars I used on my 2005 Specialized Enduro S-Works.

Check out my long term review for more information about this bike: http://www.singletracks.com/blog/mtb-gear/2012-jamis-dakar-sixfifty-b-pro-long-term-review-part-1/