One of the big, over-arching stories from Interbike this year is e-mountain bikes. So, I decided that before I could write an article hating on mountain bikes with electric motors, I had to at least ride one first.

Enter the Vitality Dice 29er by Kreidler, a company out of Germany. 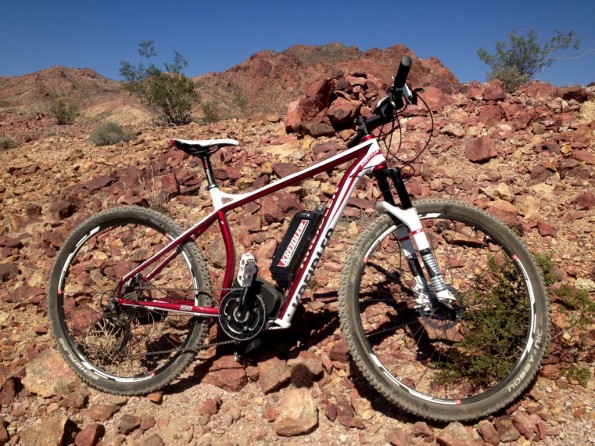 The Vitality Dice comes kitted out with the top-of-the-line Bosch e-assist system. A heads-up display provides all the information you need to know: speed, distance traveled, amount of added thrust from the motor, estimated distance range at current output, and more. The Bosch System on this bike can provide additional thrust ranging from 0% of pedal stroke up to 120%.

Weight with the battery and motor comes out to 22 kilos, which converts to 48.5 lbs. 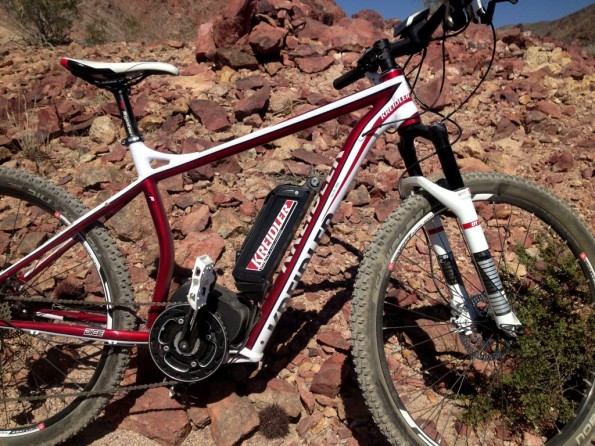 I have to be honest: I was prepared to hate on this bike like nobody’s business. But after reflecting on my experience aboard the Kreidler, some of the lyrics from the Electric Boogie come to mind:

At first glance, the Kreidler looks like a pretty standard mountain bike: 6061 aluminum frame, 29er wheels, classic drivetrain, and maybe a big waterbottle on the downtube. You can’t really see what’s going on under the hood… especially when it whips by you out on the trail.

Like I said, I was prepared to hate on it, but to really understand the appeal of an electric mountain bike, you gotta feel it. You can’t just stand on the sidelines and watch. In order to really understand why everyone’s talking electric, you have to ride one yourself.

While I was prepared to hate on this bike, I couldn’t help but have fun once I was on it. Ooh, it was shakin’, alright! Breezing up the hills at 28mph was just so much fun, and on the way back down the quality suspension just did its job. (While I was able to squeeze 28mph out of the motor before the limiter kicked in, according to the guys at Kreidler the US versions will only be able to reach 20mph before the limiter turns the motor off.)

While the e-assist motor can provide 0, 30, 60, 90, and 120% addition to the power you are inputing via the pedals, due to this bike’s massive 48.5-pound weight, I found that at least 30% power was required just to compensate for the large weight… and even then it still felt sluggish. As you might imagine, after testing in the lower settings for a little while, I kicked it up to 120% and left it there for the rest of the ride. As Jeff mentioned in his review of the Haibike XDuroRX29, there’s zero learning curve to these bikes: the added power occurs naturally without you having to think about it. Just use the handlebar control to set the level, and forget it.

However, there are plenty of downsides to riding an almost 50-pound mountain bike. The primary concern, of course, is getting stranded out in the middle of nowhere and being forced to pedal a 50lb brick, without any e-assist, up the mountain. The estimated range HUD should help prevent being stranded, but I think running out of juice would always be a danger.

Also, thanks to the weight, this bike just doesn’t handle nearly as well as a lighter mountain bike. Sure, the weight doesn’t hold you back on the climbs thanks to the motor, but cornering, descending, and navigating tight, technical sections are all made much more difficult. I managed to boost the bike off of one roller and get it completely airborne, but that took some serious doing.

In order to fit all the electronic bits into the bike, Kreidler has really lengthened the frame out in the bottom bracket region. This makes the bike much less nimble than a standard mountain bike, but as I mentioned above, there’s no way it can be nimble… so just get the idea of maneuverability out of your head.

I know what you’re thinking… e-assist mountain bikes are a very polarizing topic, and Jeff and I discussed the merits and the issues associated with them back and forth over the three days we were in Vegas. Stay tuned for a short series of articles analyzing the pros and the cons of this new breed of… bike? motorcycle?

Trails
Tremp, Spain: A Bike-Optimized Trail Oasis Below the Pyrenees
Community
Women’s Freeride Progression this Past Week has Been Absolutely Insane:...
Trails
Sinkhole Covered, 4 New Trails from Nebraska to BC, and...
Community
Thanks for Reading Singletracks
Subscribe
Login
Please login to comment
4 Comments
Most Voted
Newest Oldest
Inline Feedbacks
View all comments

Pretty nice components on this one.

These e-bikes, when they become lighter and more powerful, are going to chew up the trails like motos. Have you ridden the Rosebud extension in Crested Butte lately? It’s all chewed up and virtually unrideable because of the motos, They ride it when wet also, because they can, making it worse.