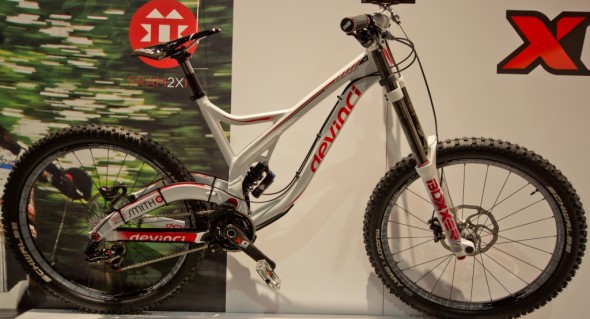 Mountain bike suspension manufacturers seem to have raised the bar yet again this year. Everyone from Fox and Rockshox to DT Swiss and Marzocchi to newcomer Formula was proud to show off their latest and greatest. 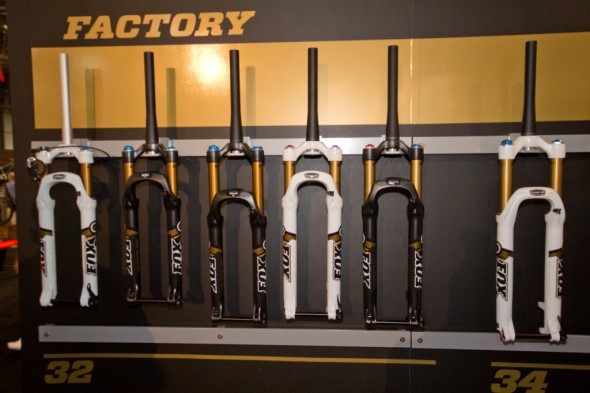 Stopping off at Fox first, I spent some time talking with Josie Jacques-Maynes, an accomplished mountain bike racer in her own right, about their 2012 line up. Fox is splitting the line into three categories: Factory, Performance, and Evolution with Factory being the highest end with all the latest and greatest. The entire 2012 line up gets new SKF low friction seals which improve sensitivity. The rich Kashima coating still finds itself on all the Factory line forks and now on the RP23, RP2, DHX Air 5.0, and the DHX- RC4 shocks.

Fox is also coming out with an all new longer travel 29er fork for 2012. There are two versions: a Float with 140mm of travel or a TALAS with 110/140mm travel. Up close you can tell FOX took their time to evaluate this fork before bringing it to market with careful consideration to both weight and strength. Coming in at 4.54lbs (TALAS taper steerer 15QR) this fork is begging to be tossed on a Yeti SB95 or similar long-travel 29er. 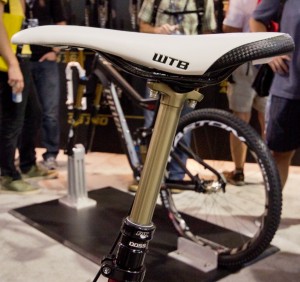 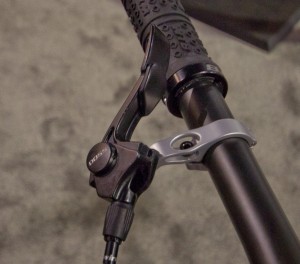 Fox is also nearly ready to release their version of the dropper seat post. So far what is clear is that it will come in two sizes (30.9mm and 31.6mm) and will feature a remote lever (natch). Checking the test model I did the wiggle test and lo and behold, this one had nearly zero side-to-side play compared to others on the market. Am I waiting to test one… YES.

As for the rear shocks I am stoked on getting ready to give a full review on the 32mm TALAS and RP23 shocks. This year’s RP23 has what Fox calls Adaptive Logic which provides a greater range of ProPedal tuning and increases the Boost Valve effectiveness. 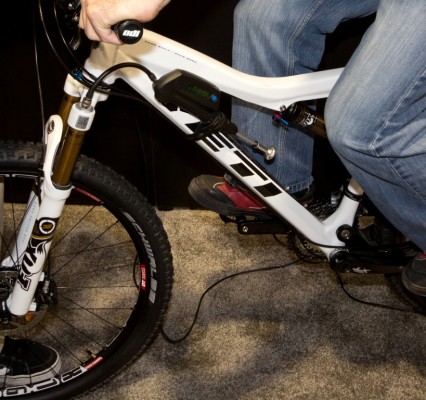 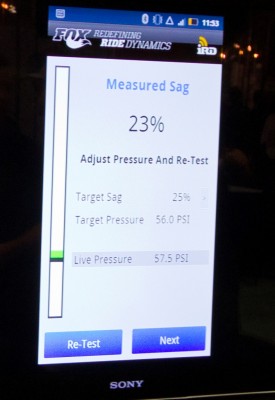 Fox previewed a new technology still early in development that uses any Android device or Garmin GPS along with a special pump (with built in ANT+) to set up the fork. First you scan the QR code on the fork , then hook up the pump and the app tells you what to do next. Seems like a neat concept for setting up the fork correctly. The program even gives you recommended compression and rebound settings. This unfortunately is still under development but if executed well I can see it helping many riders get their suspension set up right. 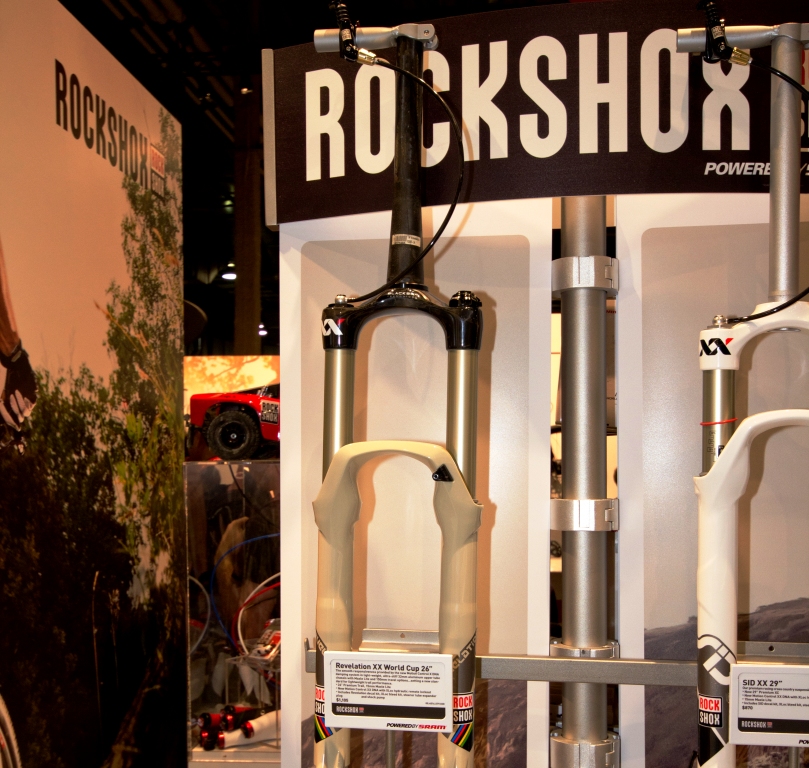 Swinging by Rockshox and talking with Tyler Morland about everything SRAM, we went through all the numerous tweaks that Rockshox has made for 2012. Lower friction damper cartridges, Keronite on the top models, and tapered carbon steering tubes are just the start of what Rockshox has to offer this year. The really big news for Rockshox is the expanded offerings in the 29er markets. You can now get your hands on a SID, Reba, Recon, Revelation, and the lower cost XC versions for big wheel rigs. With travel options from 80-140mm, Rockshox is making sure you’re covered. 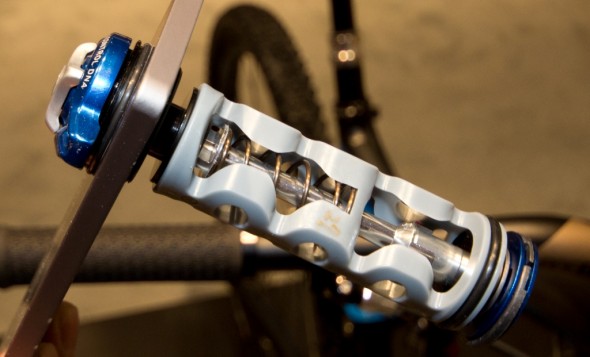 The all new Motion Control DNA damper cartridge is lighter and features greater adjustability and improved sensitivity. For all you gram counters, the lightest 29er SID weighs in at just 1450 grams – pretty damn light for sure. Jeff has posted a few articles about longer travel 29ers bikes and the Revelation 29er with its 32mm uppers and 20mm maxle will surely find its way onto many a Trail 29er soon. 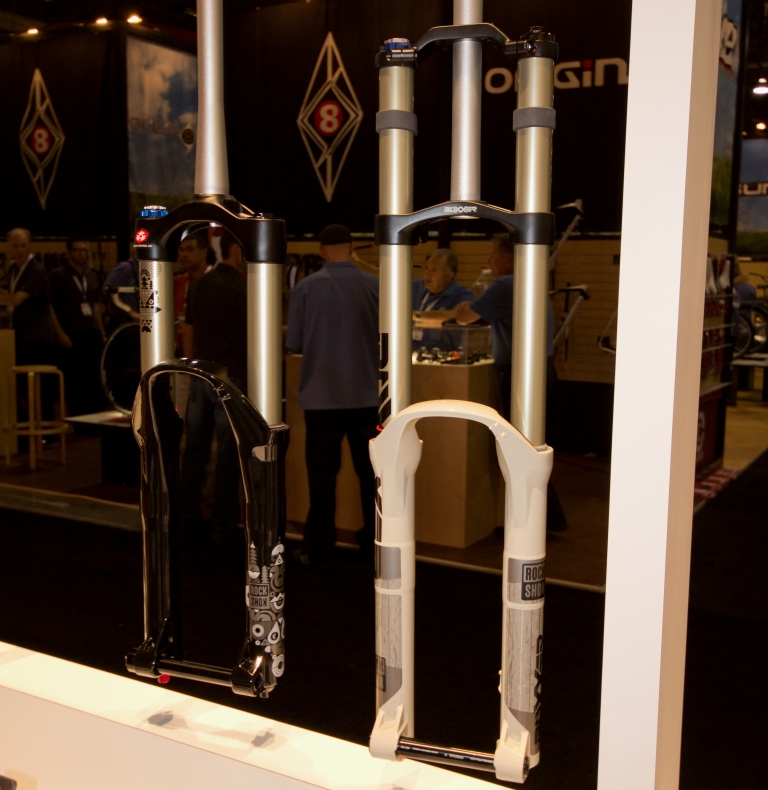 On the longer travel side of things, the Lyrik gets major upgrades with a choice of a BoXXer-derived Mission control DH damper, a Dual position air system that will drop the travel down 30mm in just one 110degree sweep, or the BoXXer-style solo air spring. Stiff 35mm stanchions and three choice of steering tubes will round things out. The BoXXer gets tweaked as well with further improvements to sensitivity as well as some weight savings with the lowers coated in Keronite rather than paint. The Keronite is a very hard uniform surface, much like a ceramic compound which helps reduce weight while keeping strength high. 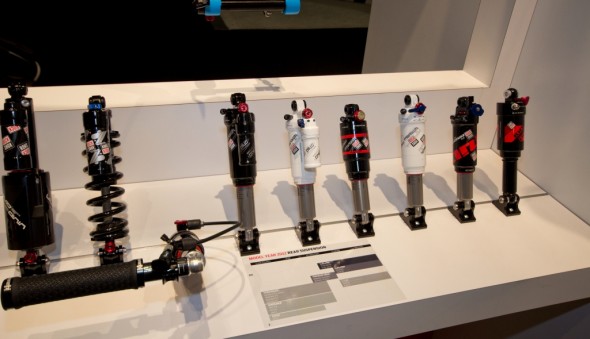 At Rockshox it doesn’t end with new forks. The photo above says it all. There are now white color options on the Monarch and Monarch Plus shocks and even a new carbon option on the Monarch which gets some versions below 200 grams. The Monarch Plus is now available and will pair nicely with a Lyric on those longer travel Trail or AM bikes.

Another new item from Rockshox this year is the Kage rear shock. The Kage matches the Domain series of forks and is a lower priced option to the Vivid line up. The Kage RC has pre-load, compression, and rebound adjustments and comes in at 402 grams (no hardware and no spring, 216mm length). 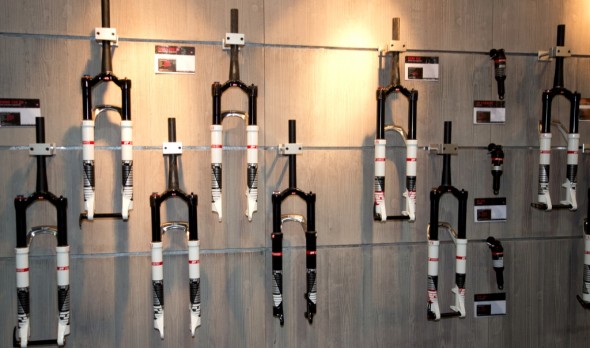 DT Swiss also made an appearance at Interbike this year to show off their suspension tech. The forks all have a very uniform look to them which could be a bit confusing but other than that you’re looking at a solid choice. For one thing the XRC 100 Single shot comes in at just 1170 grams with a carbon steering tube (with an unique internal rib for stiffness). The lowers are carbon as well with a reverse arch much like Manitou forks. The biggest fork is DT’s EXM 150 coming in at 1675 grams. 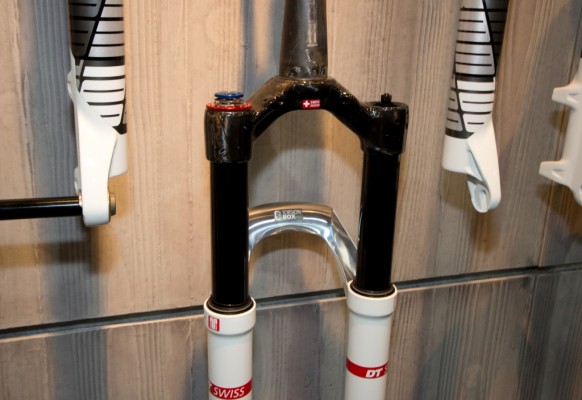 The EXM 150 features a magnesium lower with a polished center bridge called the torsion box. Controls on the EXM are much like many platforms with a threshold control and independent rebound and compression circuit adjustment (Launch Control). The ABS (Auto Balance System) is used for the damper which makes it easy to set up the air spring. The positive and negative air chambers set themselves automatically. 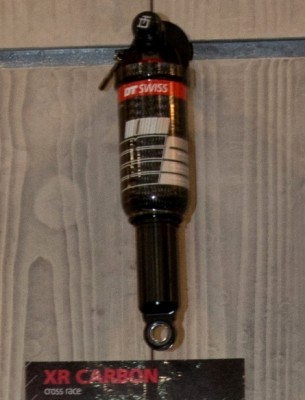 DT Swiss also offers the incredibly light XR carbon rear shock. At its shortest length, 165mm, you have a shock that is 142 grams. Pretty crazy but yeah, talk about light. The XR also gets a new air spring with the same ABS platform as the forks for precise set up. What I find unique about this shock is the threaded carbon canister. To date I believe this is the only carbon component that has threads right in the material. Using an aluminum damper shaft for the rest of the construction and carefully placed seals should keep this damper working for some time.

Unfortunately Manitou was not at Interbike this year but they have a few refinements on the Dorado and R7. The big news for them is the release of the Marvel, the first for Manitou with a QR15, using the familiar hex that has been used successfully on their 20mm through axles. In addition to the Marvel, a tuning kit is being offered that will allow everyday riders to tune their suspension to perfection. For the rear suspension a tweaked Revox shock is coming this year. Stay tuned for a review on that soon! 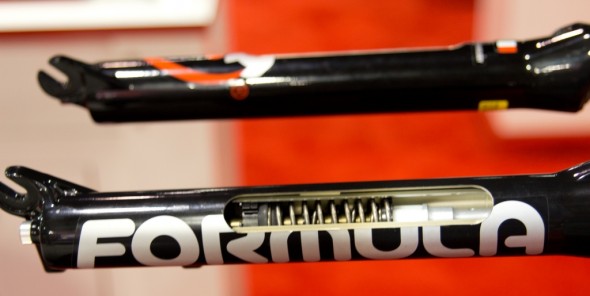 Formula is making a debut this year with their very own fork design using 33mm stanchions for a good mix of stiffness and weight savings. Add to that a pull spring for small bump compliance and a main air spring for the bigger bumps and this promises a sensitive shock. The display models were QR9 with post mounts and it wasn’t clear if a 15QR is on the way. What you can see in the cutaway is the thin lowers and even the lower DU bushing, all designed to keep things as light as possible. 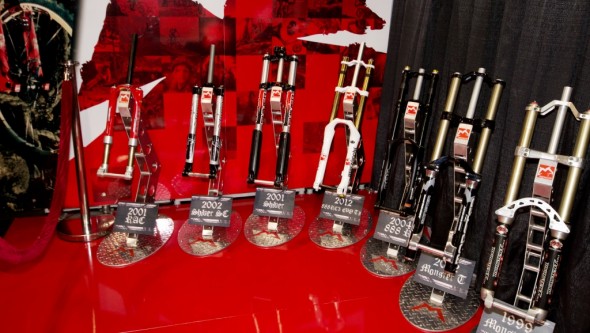 Marzocchi was at the show showing off their latest line of extensive forks along with a display of legacy fork models. The line up has been revamped with new models and changes in the damper cartridges. The new Corsa Superleggera Carbon 29er fork features a one-piece tapered steering tube / upper crown and a weight that rivals some 26er forks at 1650 grams. This fork offers three travel lengths (80, 100, and 120mm) and is internally adjustable using a new hydraulic travel adjust system (Switch TA) that works completely independent of the damping system. Relying on hydraulics, the optional travel change of 40mm (on the 55 series) or 30mm (on the 44 series) automatically re-extends without pulling back up on the bars. 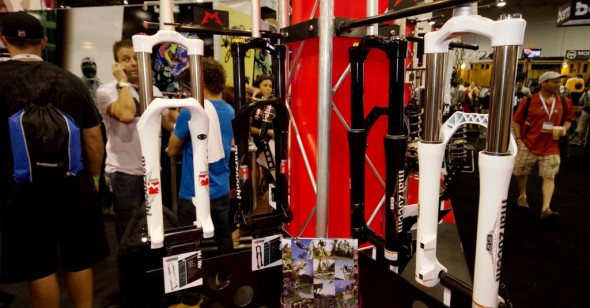 On the bigger side of things, the 66 hasn’t changed much over the last year, but the 888 RC3 Evo gets a new and improved cartridge and finally a 4-bolt mounting system for the stem. The Roco line up of rear shocks sees a color change, now in black to tone things down a bit. 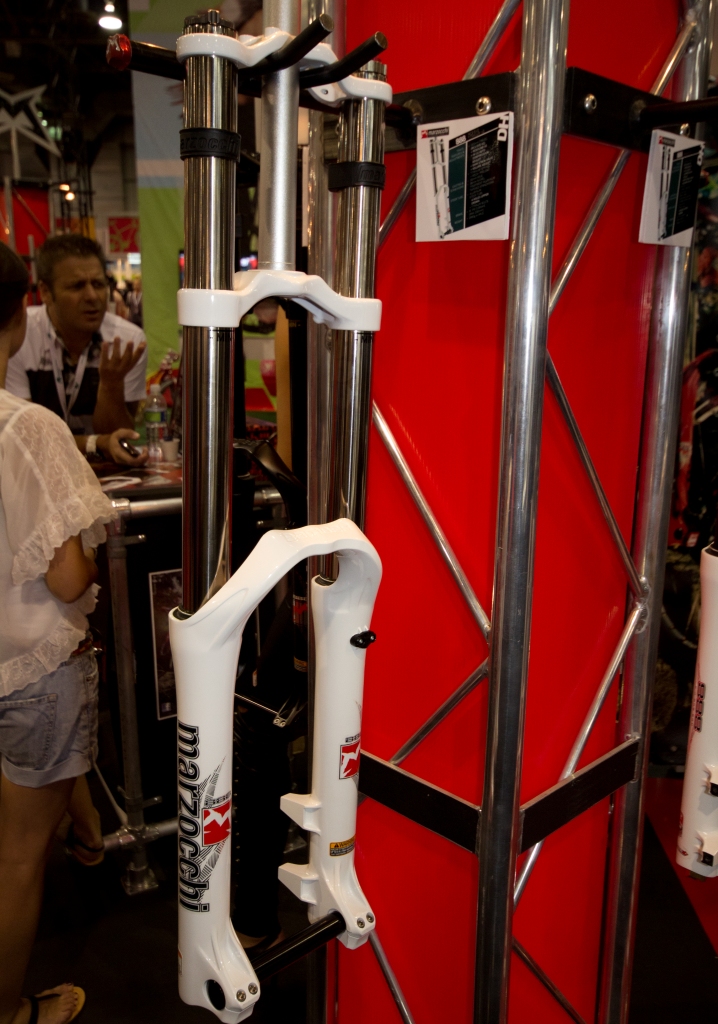 Unfortunately we didn’t have enough time to check out everyone at the show – we missed Suntour and X-Fusion – but hopefully next year we will stop by and check that out for you. Stay tuned for more coverage from Interbike!

One thing we didn’t see at Interbike but sounded interesting: Specialized shocks with “auto sag.” The name seems a tad over the top – it’s automatic in “just 4 easy steps” – but still, seems like a step in the right direction toward helping folks dial in their suspension at home. Anyone have experience with this or care to comment on the concept?