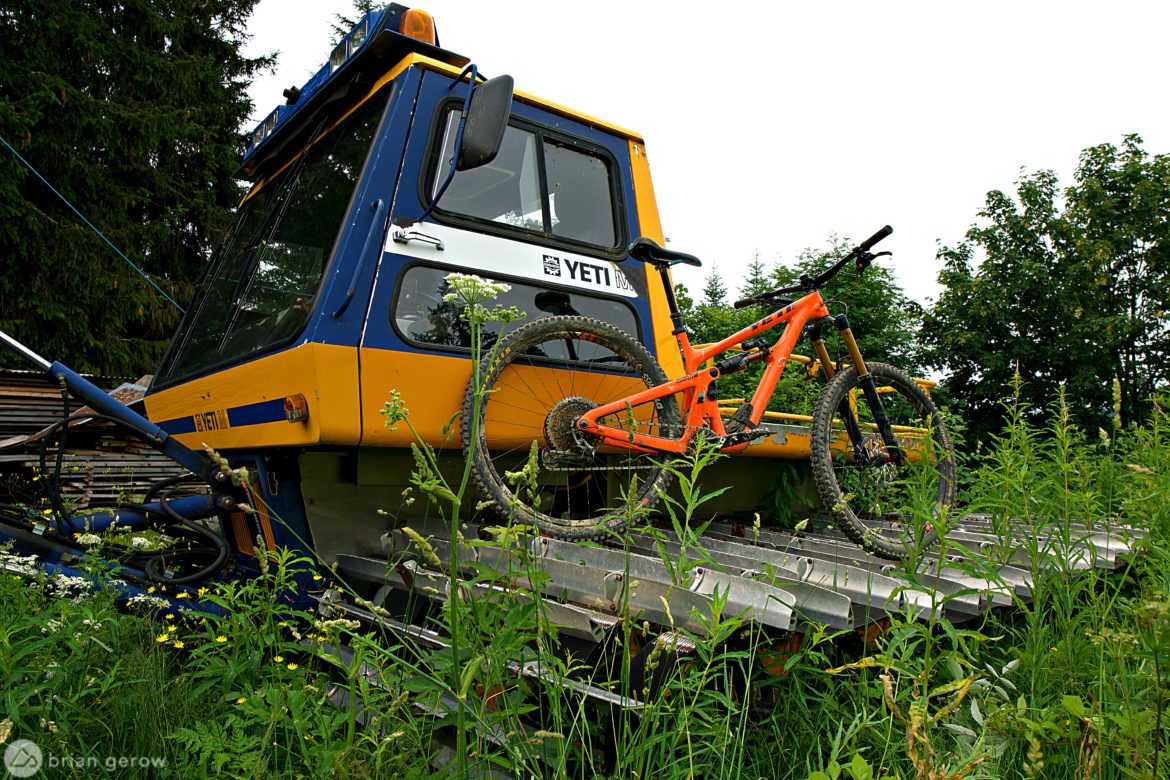 The Yeti SB150 has been a fantastic bike to throw down steep and dusty singletrack over the summer. Holy wow this bike is fast, and it demands attention from its rider like few others. I received the review whip from Fred Glo at Tribe Sport Group, and it has accompanied me to a number of beloved European ride centers throughout our summerlong tryst. Get the spicy gossip below.

Like the venerated racehorse, American Pharoah, this bike was bred for speed and aggressive riding throughout. Every element of the SB150 — from its stout build and pointed-down geometry to its precision-focused suspension kinematics — was selected with enduro podiums in mind. Riders who enjoy blasting singletrack toward shorter run times or better race results will find everything they need in this bike. The faster you let it run, the better it performs.

Folks who enjoy playing around on trail features more than charging toward the finish might be better suited on one of the Yeti’s party-pointed rippers, like the SB130, SB140, or the long legs of their recently released SB165. 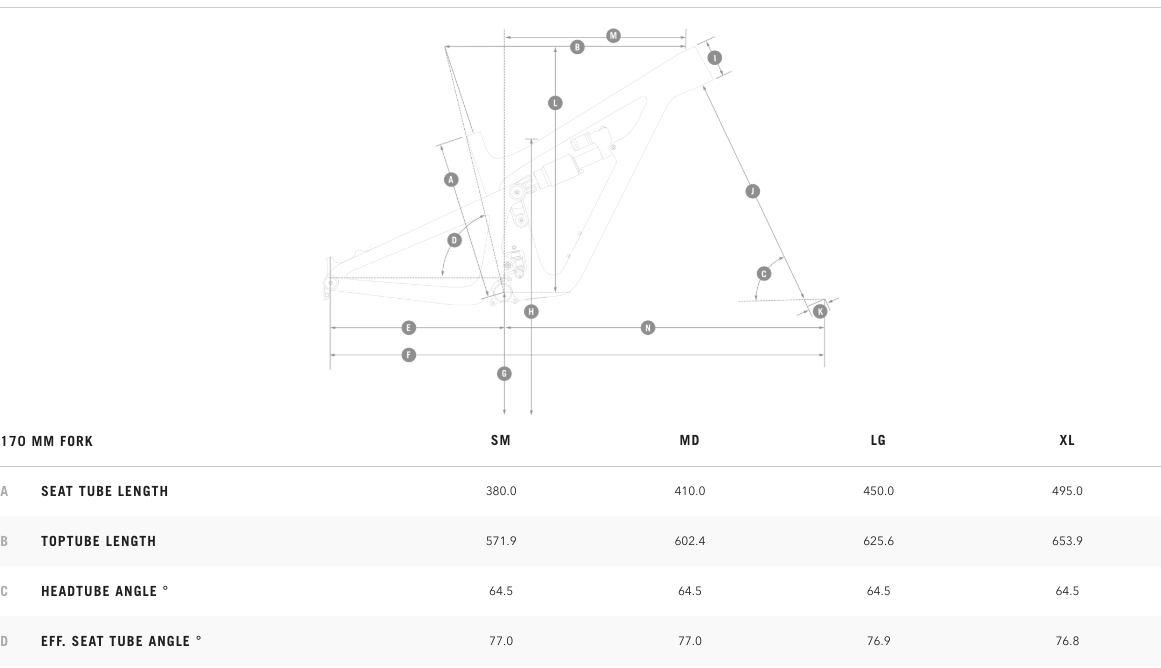 The SB150’s angles are on par with most contemporary 29″ gravity race bikes, not truly stretching toward the extremes in any measurement. The size medium I rode has a 460mm reach, which is just half of a centimeter longer than the Orbea Rallon I recently tested. The chainstays are on the shorter side at 433mm, and the BB height is fairly standard at 347.8mm. The headtube angle is half of a degree slacker than the 2018 Rallon models, at 64.5°, and equally steeper than that of a Transition Sentinel that sits back at 64°. Finally, the 77° seat tube angle is properly paired with the Switch Infinity suspension system to make the bike climb far better than expected. More on that below. 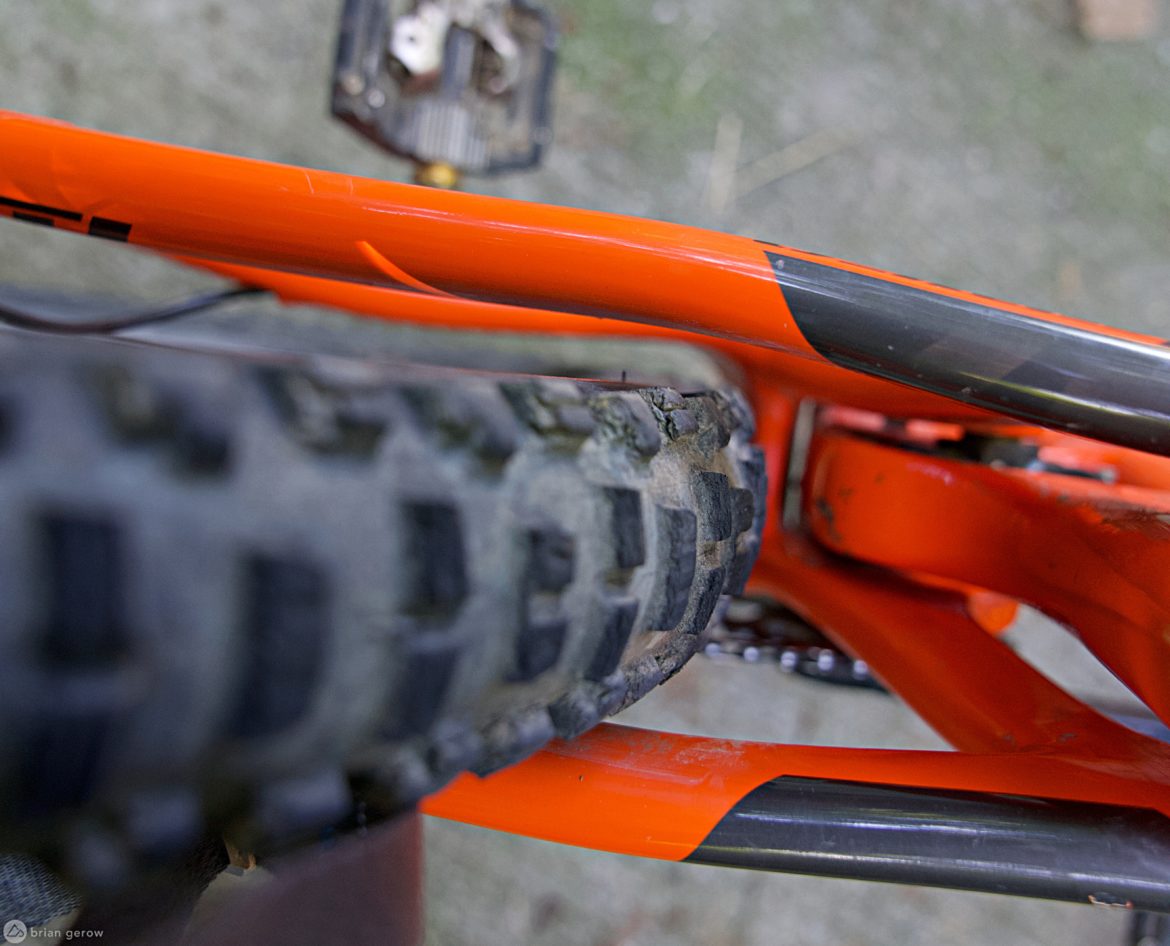 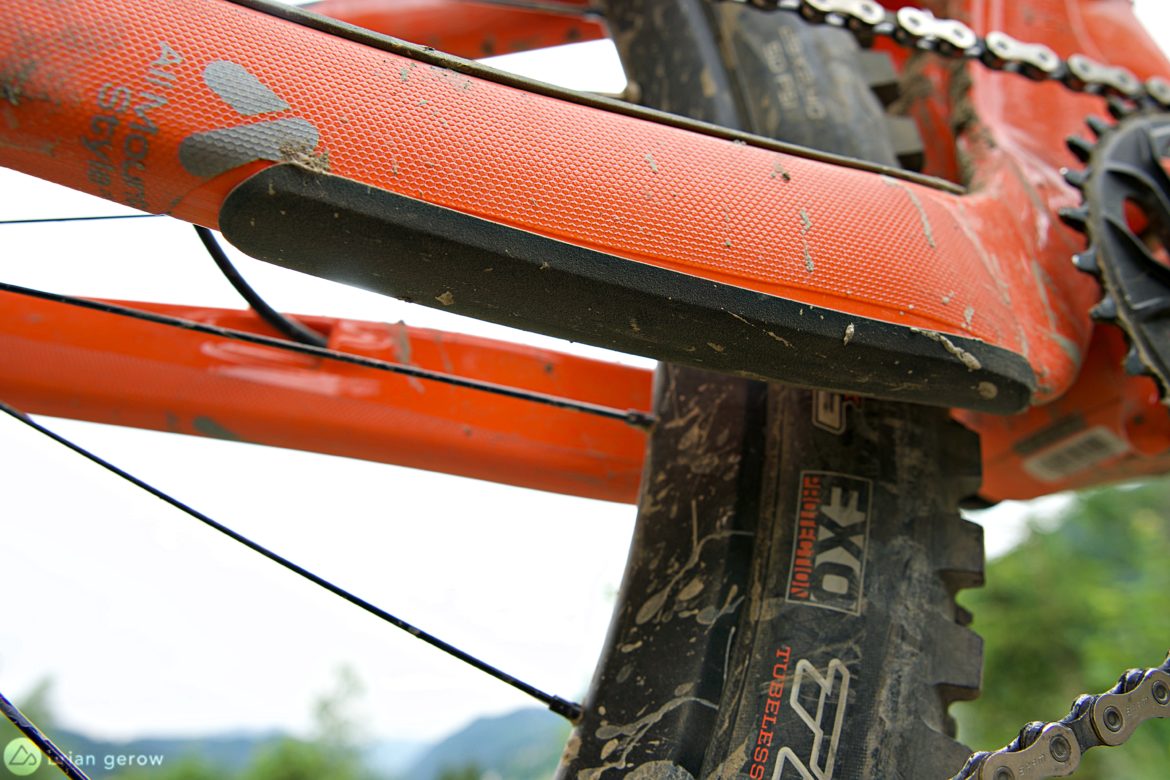 The carbon fiber frame is covered in all of the right places by a replaceable protection kit. The bike I rode came from a demo fleet, and has some All Mountain Style protection added to save its resale value over the season. 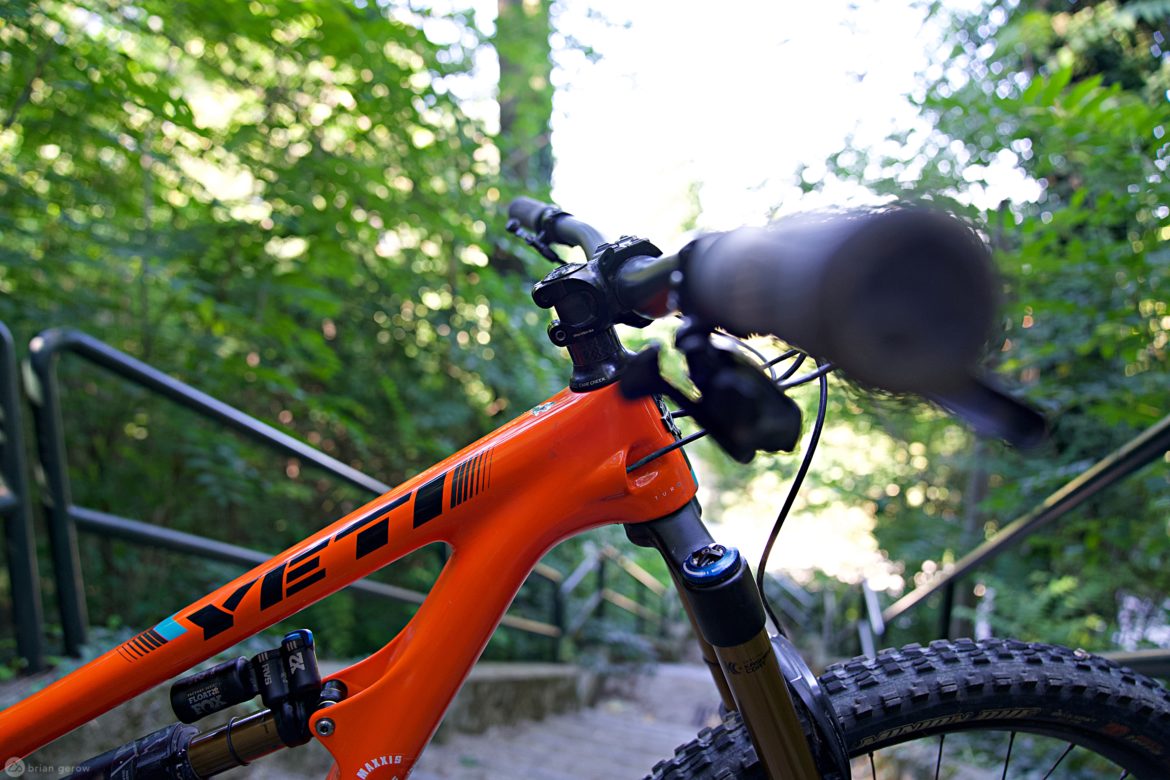 The forward-facing internal cable routing eliminates a lot of frame rub issues and keeps the hoses and housing dead quiet inside. This frame is noticeably quiet on rough trails, where riders can focus on traction sounds instead of slapping plastic. 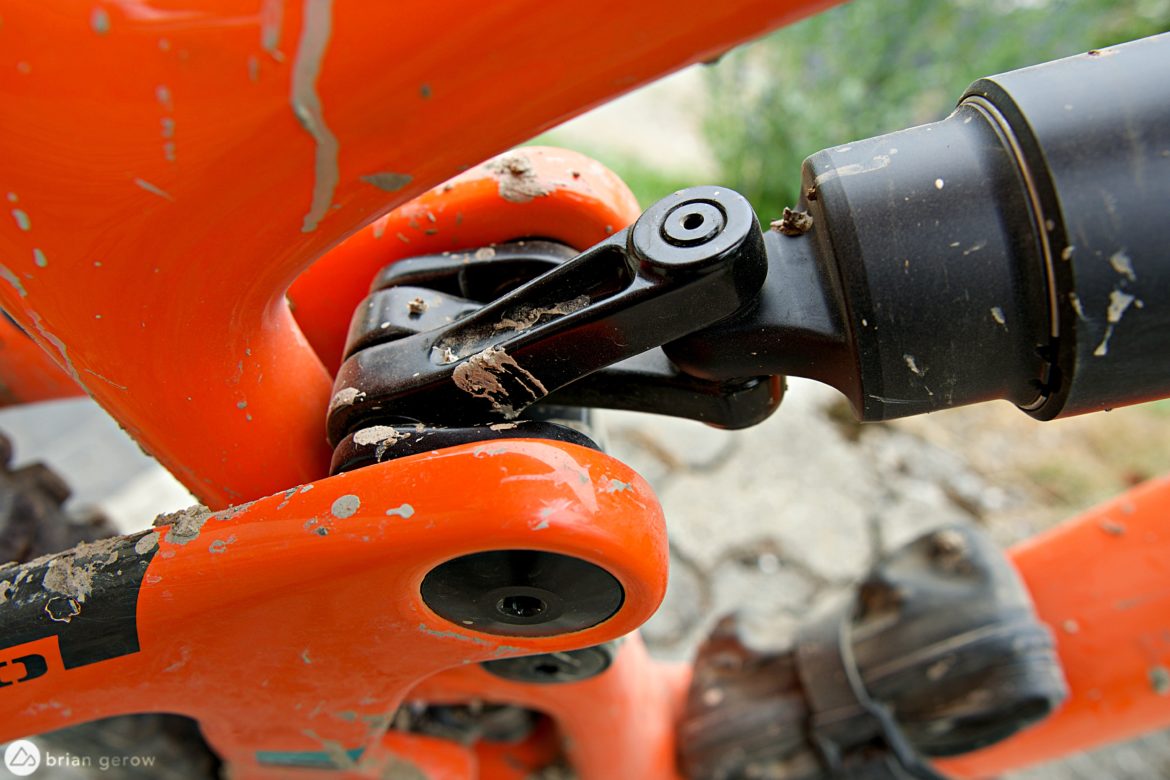 Yeti says that the “wishbone shock extension was developed to maximize standover, maintain kinematics, fit a water bottle in the frame, and allow easy access when replacing or servicing the shock.” The company “also developed a shock extender that’s certified by FOX to accept a coil shock.” 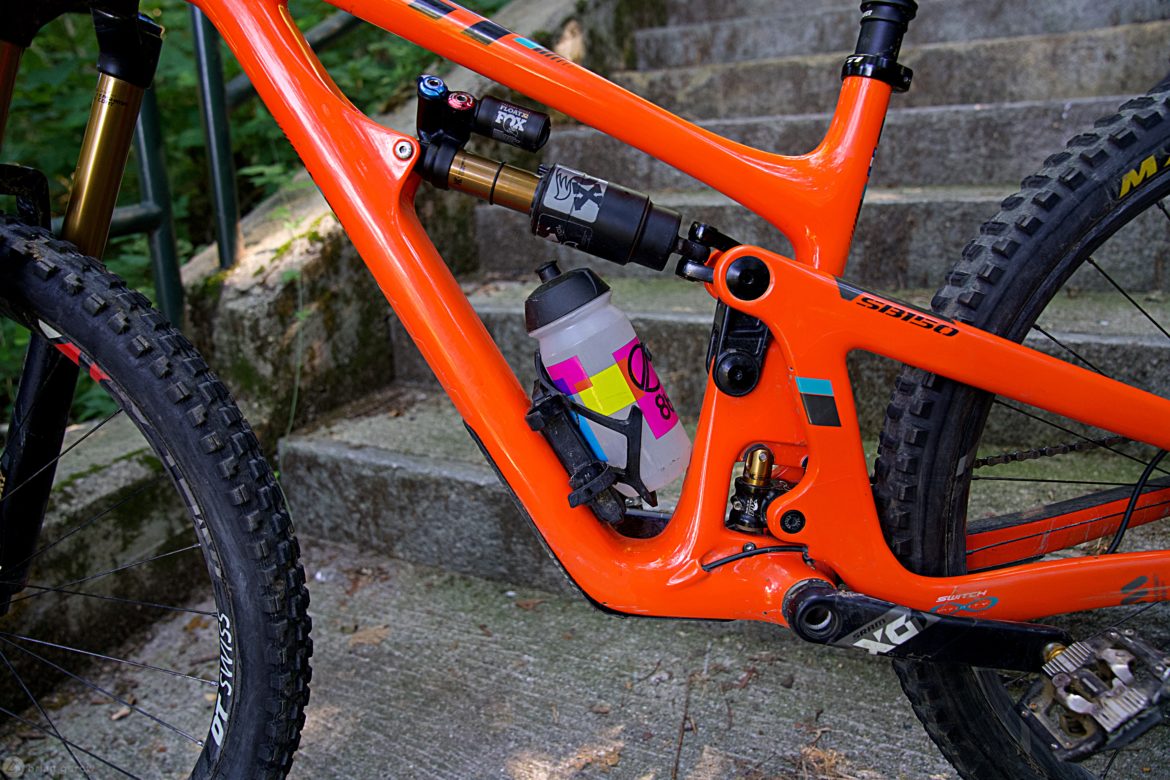 The frame accommodates a small water bottle, with triangular spaces remaining for tubes and other stash goods. With the bottle cage slid all the way forward the bottle touches the seat tube, even with a conventional cage. SB150 owners may want to modify a cage to slide further ahead or stick a piece of clear tape to the seat tube to protect the paint.

My test bike came equipped with a 170mm Fox Float 36 fork with the Grip2 damper. I found the fork wicked easy to dial in, and was happy to play with each of the individual knobs that tune it up. The Fox X2 shock is similarly well suited for this bike, though the rear suspension took far longer to dial in than expected, largely due to my lack of familiarity with the Switch Infinity system.

The SRAM Code RSC brakes and XO drivetrain performed about as expected, which is to say that they were neither impressive nor problematic. After a solid summer riding the new Shimano XTR group on my personal bike, this SRAM kit feels fairly clunky and imprecise. If this were my personal bike I would undoubtedly swap the brakes for the more powerful feel and consistent performance of the new XT or XTR 4-pots.

The rest of the build, including the DT Swiss XM1501 wheelset, Fox Transfer dropper post, and Yeti branded carbon bar performed flawlessly throughout the summer. The Turq carbon build I rode retails for €7,199 (about $7,900USD), with an optional carbon wheel swap for an additional fee. Check Yeti’s website for alternate build options and pricing, or shop online. 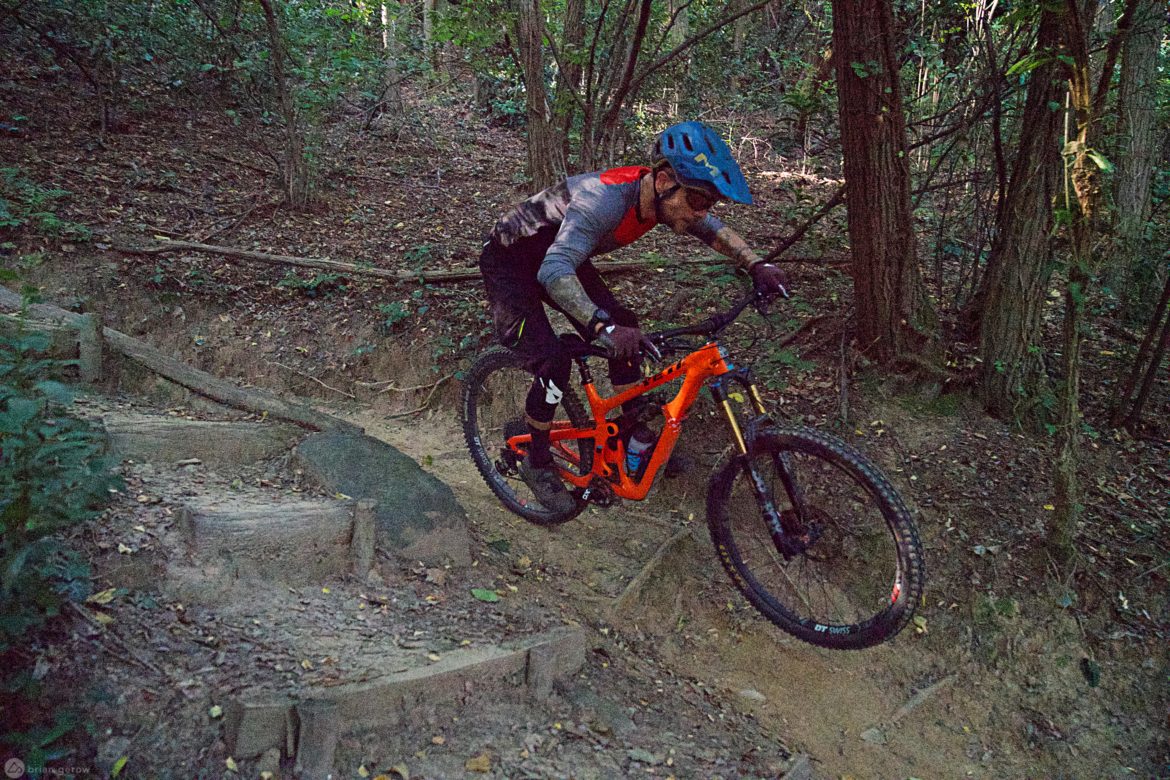 The obvious place to start is with the bike’s climbing prowess since that’s where most rides begin. Before picking up this whip I had never ridden a bike with the Switch Infinity platform, and haven’t spent loads of time on other bikes that have similarly complex suspension systems. I have been dazzled by the smooth action of its rear suspension, and from an ascending perspective, I would undoubtedly buy a bike with these pedaling characteristics. Like a good pair of gloves, the rear suspension is unnoticeable while climbing, in the best way possible. There is no pedal bob to speak of. There is not even a clear sensation that the suspension is doing anything unless you look at it, and the bike’s technical climbing traction is fantastic. I kept the shock in open mode at all times, and have not yet seen a reason to firm it up. It’s ready to rip as soon as you reach the peak.

A friend of mine who rides faster and more playfully than I do recently bought an SB150 only to sell it less than six months after. He mentioned that “when you are riding 100% on your game it is a great bike, but if not it will punish you.” He has since returned to the Yeti SB6 that he was riding prior, and is happily bounding across the trail on that.

I was determined to find the playful soul in the SB150. The bike is unabashedly race-focused, but I figure it could be thrown around after we became properly acquainted. Following countless rides, I can say that it can, in fact, be invited to a proper party, though it takes more input from the rider than other long-travel 29ers in order to really dance.

The SB150’s strengths bloom brightest while slamming through the roughest trails you can find. The synthetic feel of the rear suspension smooths out chundery tread and allows the pilot to focus on the next, next turn. The suspension feels adequately supported throughout, even under heavy braking in emergency situations where a lot of squishy bikes stiffen up. If you need to brake in a turn the rear end won’t bog down or buck you off line, and overall the bike has an impressive ability to track accurately.

The well-adjusted suspension doesn’t scold you for untimely slowing and hugs the ground like a koala in a freshly climbed eucalyptus tree, but this does require a few tradeoffs. It is more difficult to bound off every last trail feature with a bike that aims to provide this much traction. I opened the rebound all of the way and added air to the shock, to the clear detriment of rear tire traction, and still, the SB150 didn’t want to bounce around as readily as other sleds I have tested. There are numerous pro riders who can make this whip look like it was designed to party as much as race, and it seems that their weight, muscle, and skill are helping that demonstration along significantly. 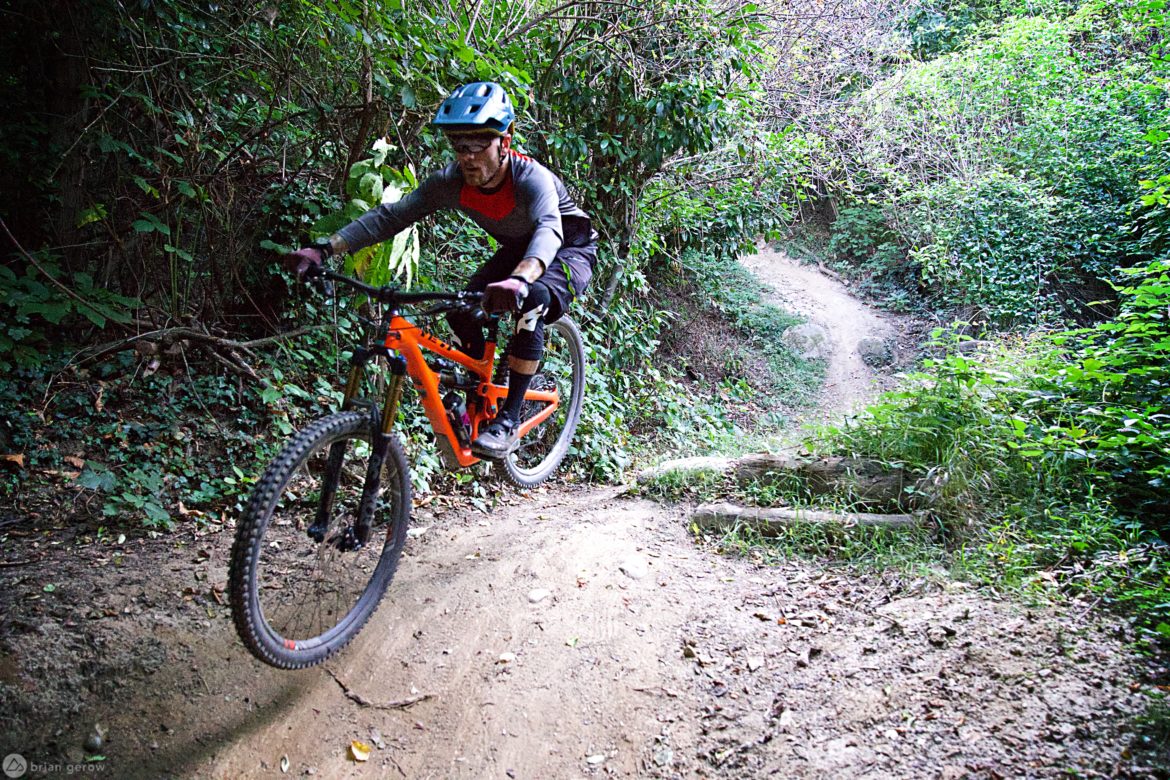 When I say the aggressive Yeti is for aggressive riders, I mean that the SB150 is a razor-sharp tool for its intended job of enduro racing and high-speed riding. When it’s fed the elements of a modern enduro race course this bike will eat all day without satiation and will do it better than a lot of bikes in its class. If you ride like I sometimes try to ride, i.e. “as fast as I can convince myself to let go,” this is the kind of bike you want beneath you. After all, it’s piloted by one of the most talented male mountain bikers in the world, and I think if you can catch Rude you get to keep his bike.

Don’t need to be aggro to ride this bike. If you don’t have skill to ride aggro, this bike will set you up to get that skill. Riding back to back with other bikes, this one makes it easy (and safe) to ride fast, as long as you’re not going way faster than your trails (and physics) allow anyone to go.

Also, I recommend downsizing to size M if you’re a size L. I normally upsize happily to L, but this one is clearly better in M.

Thanks for the review Brian. Would LOVE to have one of these but that’s a lot of coin…

Also, very strange to see Yeti in red and not their signature Turquoise color.